These pretzel s'mores bites are a delicious oven-baked dream! Marshmallows, chocolate, and pretzels on a graham cracker crumb base come together to create an ooey-gooey treat that has all the great flavors we love about s'mores with a tasty, salty pretzel twist. Just stack them, broil them, and enjoy! 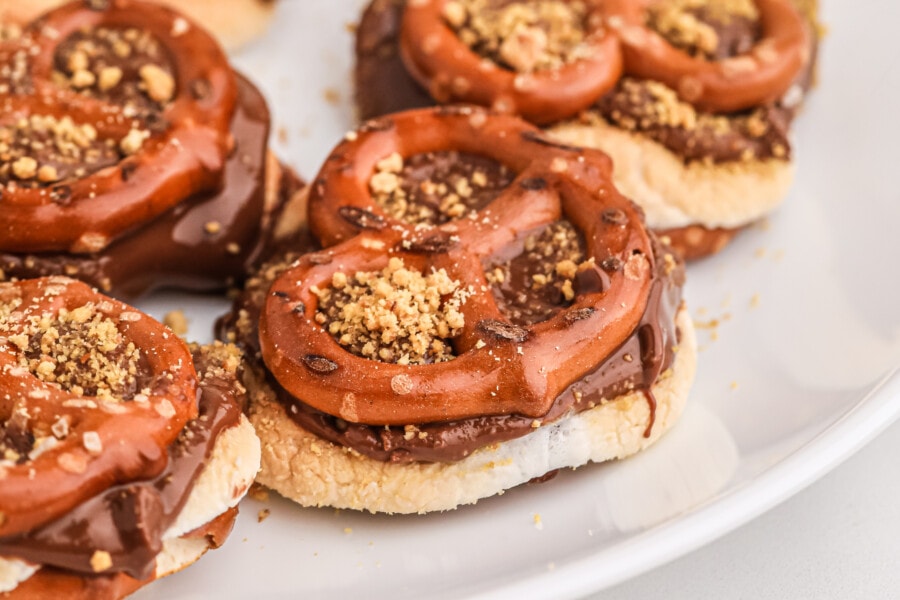 I have to tell you that if you're a fan of s'mores this is a bucket list kind of recipe. The ultimate in salty and sweet. Only moments to prepare, these addictive tasty little treats will not disappoint.

I mean how could they.

Baked marshmallow s'mores with pretzels are made using things we all LOVE like s'mores and pretzels!

They're a throwback to my younger years of stuffing my face full of campfire smores - but this recipe is a great way to make smores at home. If you're looking for a sweet treat that everyone will love, I have to urge you to try these.

Not only is this oven smores recipe fast, but it's also the perfect bite-sized treat. 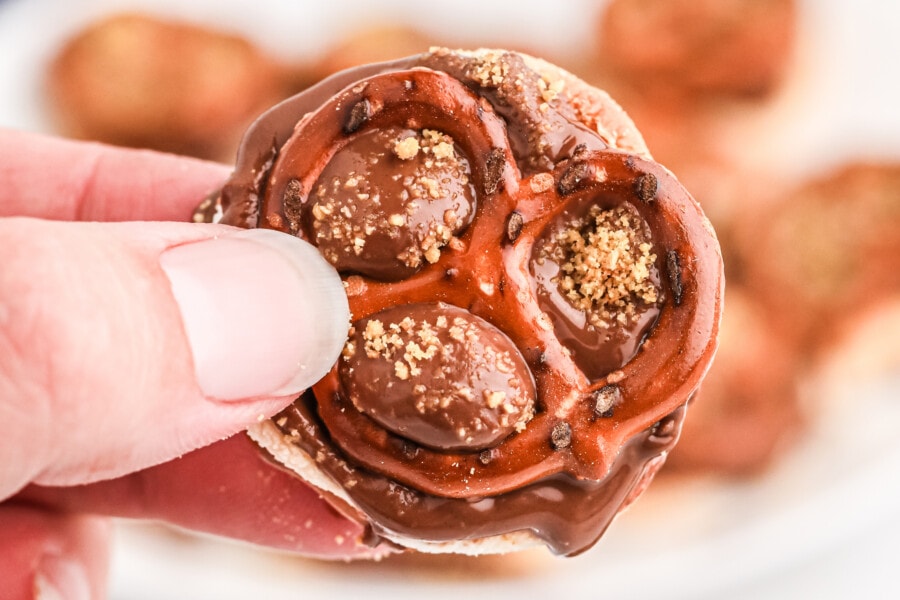 This history of s'mores is quite interesting because it encompasses both marshmallow and graham crackers, both of which has VERY unique histories. I left chocolate out of this because even a brief history of it would take a zillion words. For now, let's take a look at marshmallows, graham crackers, and of course, delicious s'mores!

Did you know that graham crackers were originally invented to curb sex drive? It's true. In the early 19th-century, a new Jersey Presbyterian minister named Sylvester Graham ardently believed that humanity was on its way to oblivion due to its obsession with lust. He also believed that food played a roll in it, stating that a simple steak dinner could be an aphrodesiac.

To counter this food-induced lust, he created a baked cracker that used finely ground, unbleached wheat flour, wheat bran, and coarsely ground germ which he named after himself. Thus, the graham cracker was born.

Of course, over time people added sugar to make it less... well, awful, and today, we have the graham crackers that we all know and love.

The ancient Greeks and Romans originally used the main ingredient of early marshmallows - a plant called Althaea officinalis - as a medicine. The root and leaves were used to help with inflammation and also as a laxative. I know, it doesn't sound appetizing at all.

It was the French who made the first marshmallow using the plant. They combined the root juice with eggs and sugar and beat it into a foam. The soft paste was then formed into lozenges. They were used as a tasty way to soothe a sore throat.

Eventually, gelatin replaced the root extract because it was a close approximation to the flavor of the plant and much cheaper to use. Over time, the recipe was refined more and more until modern times where we can now get marshmallows at any grocery store we happen to pop into.

Mallomars - which are nothing more than s'mores in cookie form - were first seen on shelves in 1913. Moonpies arrive a few years later. So lots of food were dancing around the idea of chocolate and marshmallow, but then s'mores came along and took it to an entirely different level.

The first official s'mores recipe appeared in a 1927 Girl Scout guidebook called Tramping and Trailing with the Girl Scouts. While the book was intended to be a guide on how to be a good Girl Scout, it's true legacy is the Some More recipe that it contained.

This recipe, later credited to troop leader, Loretta Scott Crew, called for graham crackers, plain chocolate, and marshmallows. It was the first S'more recipe, then called a Some More.

Over the years - no one is sure when - the name was shortened to simply "S'Mores". No one is entirely sure when this happened but there are reports that some Girl Scout publications continued to call the treat a Some More until at least 1971. 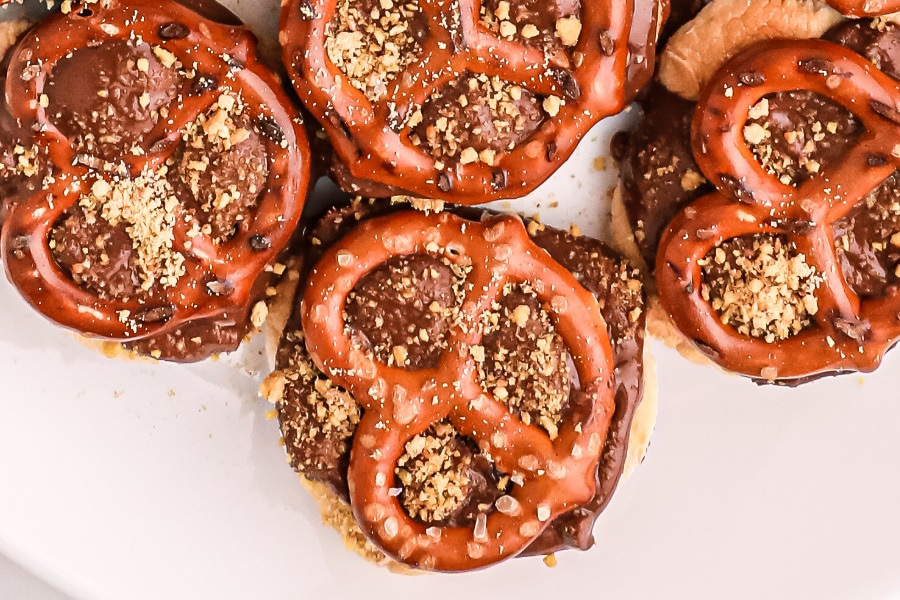 How to make bite-sized smores

This s'mores recipe is so simple to make. Perfect for National S'mores Day!

Preheat the oven to 500 degrees Fahrenheit (the broil setting).

Arrange half of the mini pretzels on a baking sheet lined with parchment paper.

Put on the Marshmallows

Top each pretzel with a marshmallow.

Broil in the Oven

Broil in the oven for approximately 2-3 minutes, or until the marshmallows are toasted. Keep an eye on them - this happens fast!

Put on the Chocolate

Next, place one of the chocolate bars on top of the marshmallow, returning to broil in the oven for another 1-2 minutes.

Remove from the Oven

Remove from the oven and sprinkle with the graham cracker crumbs before adding the final pretzel on top, making sure to push the pretzel down gently so it sticks.
Serve immediately or allow to cool and store for snacking. 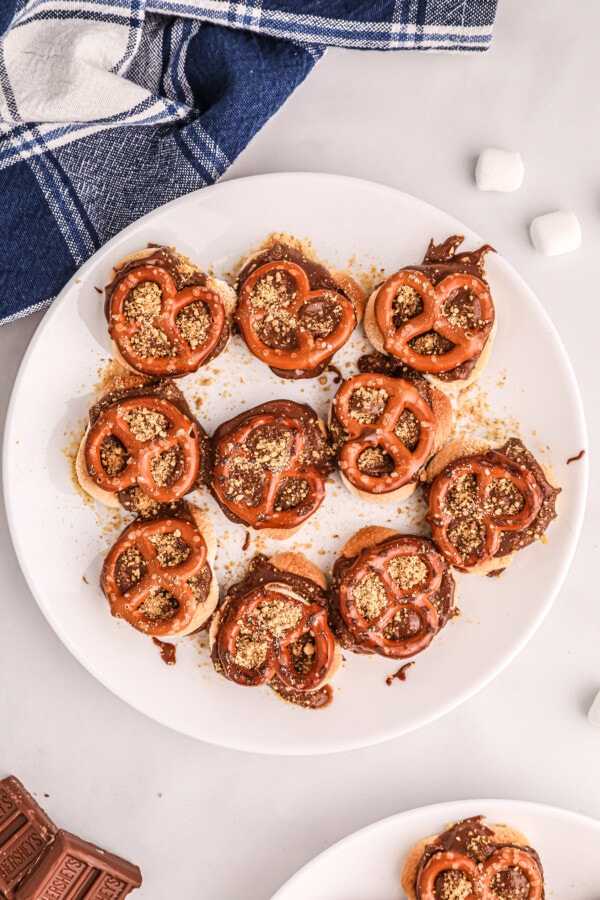 Tips for Making S'mores in the Oven

I broke the snack-size chocolate bars in half to fit better. If you don’t break them in half, you will most likely need an additional bag of chocolate. (you can't ever have too much chocolate so this isn't horrible!)

Keep a very close eye on the S’mores Bites while they are under the broiler. Marshmallows can burn very quickly, and your chocolate bars can turn into liquid. 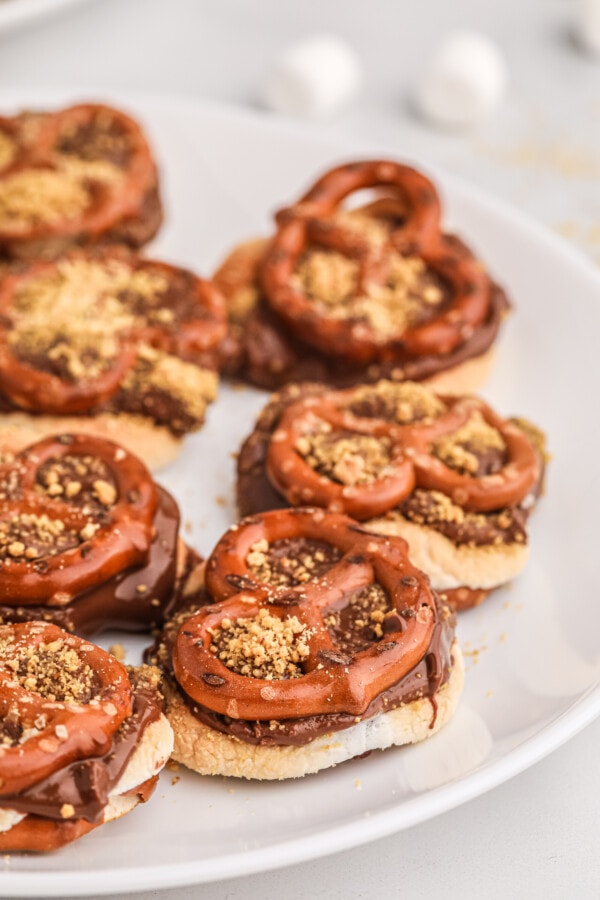 How do I store the S’mores Bites?

You can store the S’mores Bites at room temperature for 3-5 days. I recommend storing them in an airtight container to make sure they stay soft and gooey! If you find the chocolate is melting a lot, you can always toss them in the fridge to keep from having a chocolatey mess. 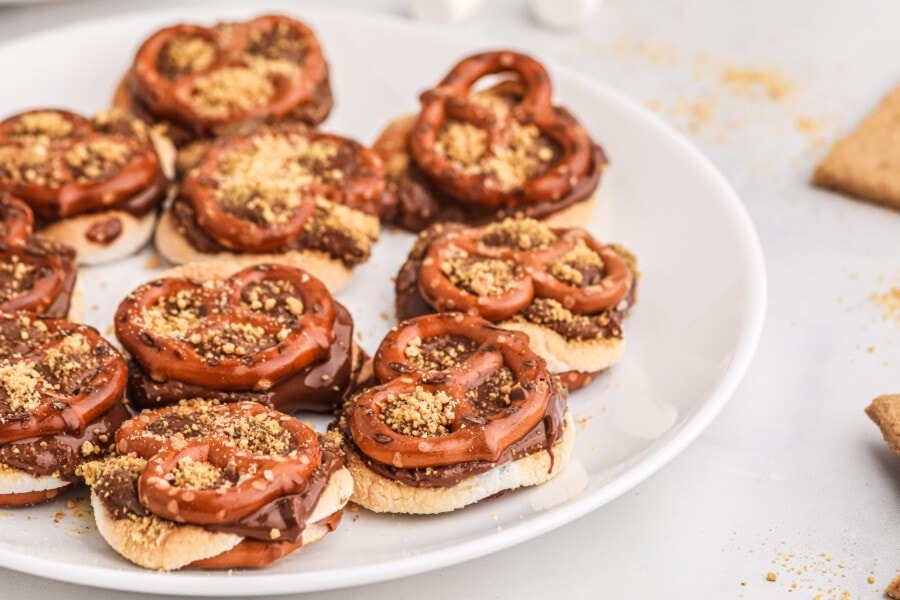 Can I eat these warm or cold?

Either! We love them fresh out of the oven and they are just as good after they’ve cooled down to room temperature. You can't go wrong with them at either temp!

Can you make this pretzel s'mores bites recipe in the microwave?

Technically, you can but trust me when I say that they're delicious in the oven. The way that the broiler melts and toasts that marshmallow will have you feel like you're eating right from the campfire. 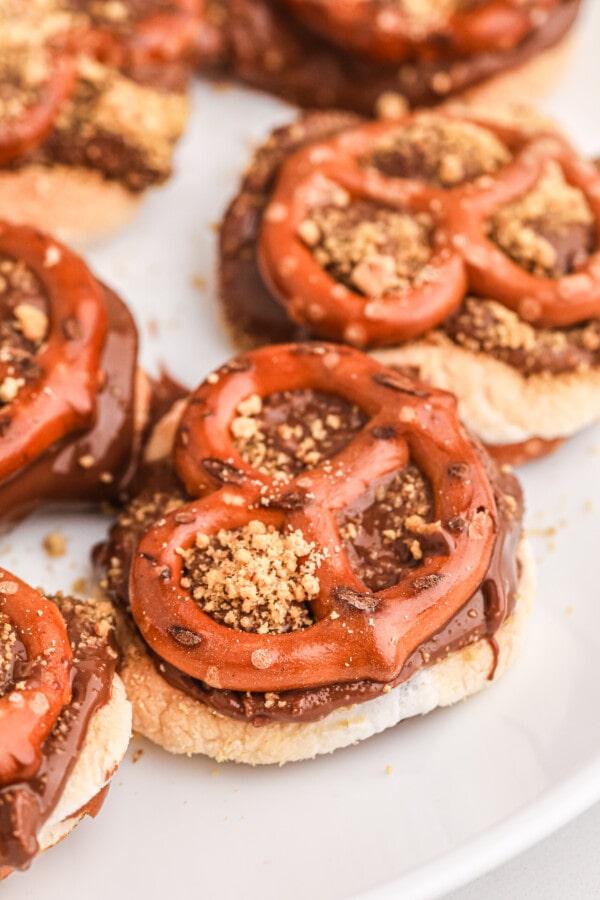 How to Store Pretzel S'mores Bites

Can you freeze this simple s'mores dessert recipe?

You can. The same thought process applies to keeping them out of the air. You need to get a freezer-proof container or bag for these treats. You can also wrap them first in saran wrap and then place that in the bag or container.

It's an extra layer of security to keep them fresh. 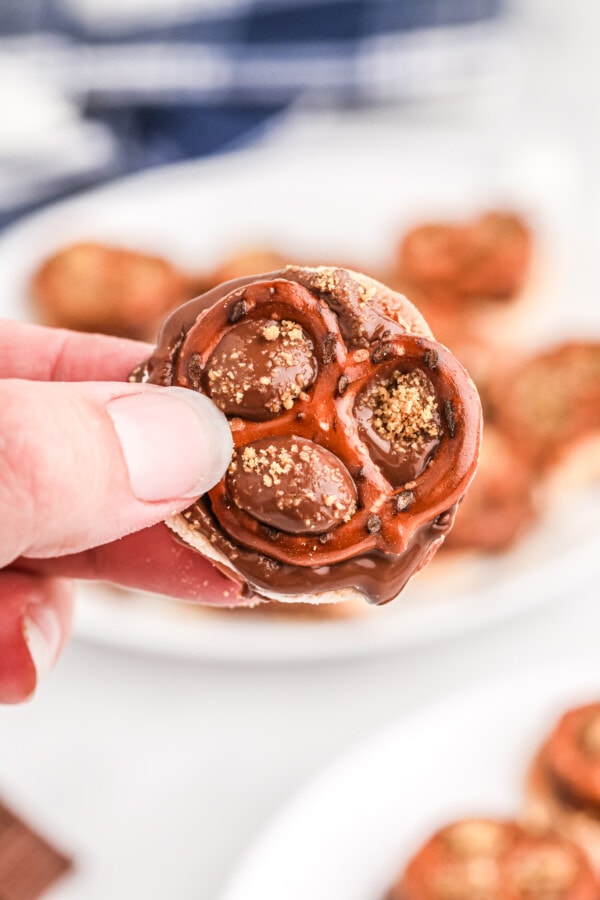 Ways to Vary Up the Flavor of S'Mores

While this recipe is perfect as it stands, you can easily change it up to make it taste a bit different, too. Have fun with this recipe because it gives you some wiggle room to play with it.

Some simple changes that you can do are:

And those are just a few varieties and options. The more that you make this s'mores recipe, the more that you can play with it! Just report back to me what you do so that I can try it as well! 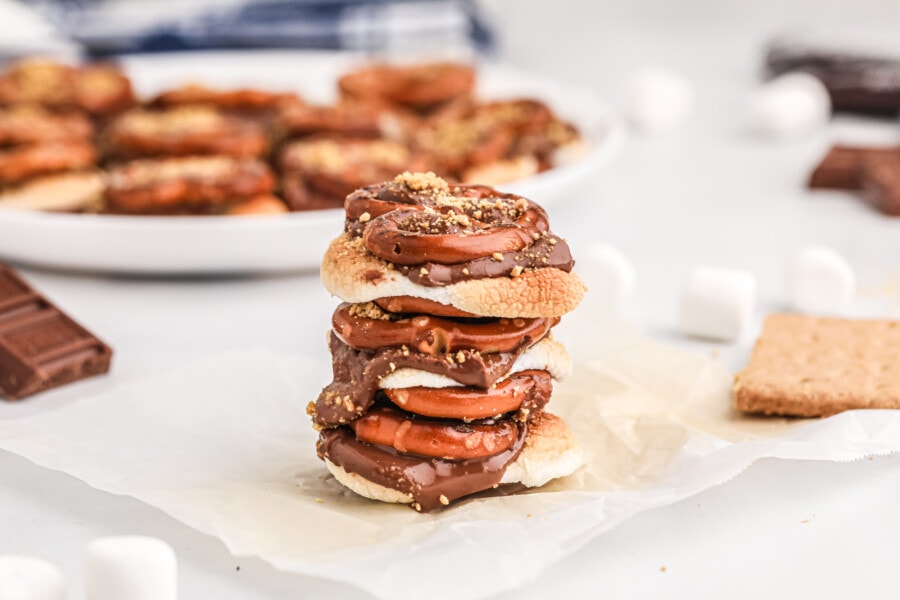 The biggest thing to keep in mind with this s'mores recipe is that it just makes the whole process a breeze. You can easily make up this dish and share it with family and friends. It's perfect for taking to gatherings as outdoor BBQs as well and it requires nothing truly taxing on your part to make it.

This is also a fun treat to have waiting for the kids after a long day of school or a simple dessert recipe that can easily be cooked up without much notice. 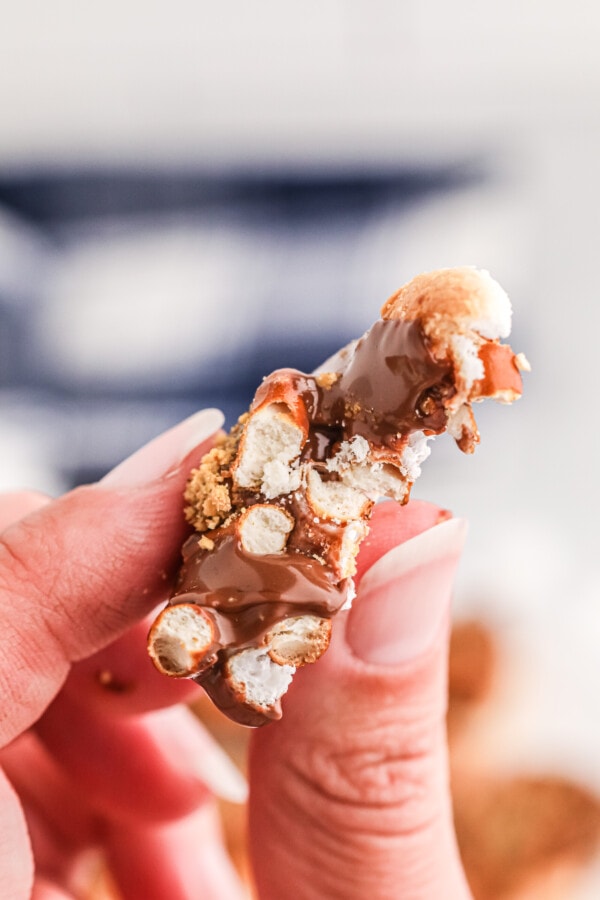 Since you can hold these in your hands without a mess, why wait? Whip them up and see why I'm loving them and have been for years. You'll be on the s'mores bandwagon right along with me!

Get These Pretzel S'mores Bites in Your Life

These pretzel s'mores bites are absolutely delicious, easy to make, and always a crowd pleaser. With all the classic flavors of s'mores in an easy to eat package that is ridiculously simple to put together, this is a winner on every level.

This recipe is overflowing with chocolaty goodness, creamy marshmallow dreaminess, and that salty pretzel on top really gilds the lily. Give this recipe a try. I know you and your family will love it.

If you like this simple s'mores dessert, don't stop! Keep that momentum going and make these recipes, too! I've found that while I make these a lot during the summer months, this recipe makes it simple to cook them up during every month of the year! 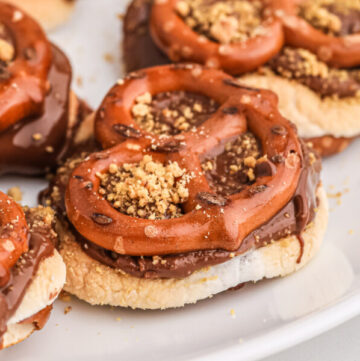 I broke the snack size chocolate bars in half to fit better. If you don’t break them in half, you will most likely need an additional bag of chocolate. Keep a very close eye on the S’mores Bites while they are under the broiler. Marshmallows can burn very quickly, and your chocolate bars can turn to liquid.