You’ve cooked ham in the oven and slow cooker before, but have you tried this Instant Pot ham recipe? It’s revolutionary! Whether you’re preparing a scrumptious dinner feast featuring Instant Pot spiral ham, savory Instant Pot scalloped potatoes and ham or Instant Pot ham and bean soup, you’ll love the efficiency cooking with a pressure cooker brings to the table.

Give me a reason to make this instant pot ham recipe and consider it done. The early years of Easter with my son was about Easter bunnies, egg hunts, yellow chicks, painted eggs and, when it came to preparing that special Easter dinner, ham of course! Always oven roasted back then, but over the course of time, a fabulous kitchen invention would change the way we do ham and other meals forever!

If this instant pot ham recipe doesn’t scream Easter dinner to you, then I don’t know what does. Quick and simple, this is one tasty, finger-licking dish!

A star protein on so many levels, Instant Pot ham is melt-in-your-mouth tender and gives you a sweet, savory combo of flavors that’s encrusted in the most delightful candy-like glaze you’ll ever have the pleasure of eating.

A mouthful of goodness scrumptious ham you won’t mind making again and again.

And making ham in an Instant Pot is a snap and frees you up to tend to other things like being a more attentive host.

Traditionally roasted in the oven, preparing ham in a pressure cooker makes life so much easier.

Read on for practical tips on how to bring this simple and delicious Instant Pot ham to life.

Other than following a few steps, very few ingredients are needed to prepare this Instant Pot ham recipe. Honey, brown sugar, pineapple and water are all it takes to bring out the very best in what ham has to offer.

In just 40 minutes, out comes the moistest and juiciest Instant Pot spiral ham your friends and family will ever have the joy of eating.

Not only can my husband and son can attest to that, when I’ve had a party, many have raved about this Instant Pot ham recipe. Take my next door neighbor and foodie, Renate. Being a protein fan, she’s had many a ham in her life but has never experienced it from an Instant Pot.

Cooking Ham in an Instant Pot

Renate and my guests come away thinking seriously about investing in an Instant Pot.

The freedom and flexibility of pressure cookers could make roasting ham in the oven a thing of the past.

Honestly, the benefits of making ham in an Instant Pot are many.

For starters, the meat cooks quickly but the pressure cooker acts like a slow cooker by sealing in the flavor. This results in a moist and tender ham you don’t spend any time fussing over. People will think you spent hours slow cooking it. When, in fact, it’s done lickety split! Well, in 20 minutes, which is pretty darn fast.

What Kind of Ham Should I Use?

There are actually different types of ham and although this Instant Pot ham recipe calls for spiral ham, there are other choices to consider.

Submerged or injected with a salty brine with sugar spices added, wet cured hams are what’s most available in grocery stores and sold as partially or fully cooked.

Covered in salt then cured, dry cured ham contains sugars and seasonings and is much saltier than wet cured ham.

Just as the name indicates, this ham is smoked. Hickory is the preferred flavor for smoked ham and it’s mainly sold as fully cooked.

Spiral ham is wet cured and comes fully cooked. It has been partially pre-sliced with a spiral machine, which helps retain its shape. Being partially pre-sliced is an advantage as it takes the guesswork out of measuring each slice. Bone-in spiral ham enhances flavor and promotes moisture.

How great is that? Instant Pot spiral ham gets my vote every time.

What is an Instant Pot?

My friends ask, since this handy, little device can make such exceptional ham, what else can this appliance do?

The Instant pot is really a pressure cooker but acts like a slow cooker in that what comes out gives you the illusion of food that’s been cooked low and slow.

Although we’re talking about ham, you can make food in large batches and prepare four or five meals in just one day!

This convenient device comes in a variety of models and, unlike many pressure cookers, has built-in safety mechanisms. Check out Instant Pots here.

Ham in an Instant Pot

Though not made in an instant, making ham in an Instant Pot comes close! And it’s not so much about the ham needing to be cooked as it is about getting it as tender as you can.

Before the Instant Pot, I roasted ham in the oven and more often than not, it would come out dry; no matter how much I basted it.

Besides the Instant Pot, here are the must-have tools in preparation for this Instant Pot ham recipe:

In keeping with the overall goal of getting the most succulent and irresistible ham you can, with this Instant Pot ham recipe, there are a few things to think about.

Just like roasting or baking a ham, there are certain precautions to take when using the Instant Pot in preparing this ham recipe.

Dealing with meat and glaze can get real messy and sticky. In order to protect the surface of the ham, start by creating a good buffer with a trivet that’s placed at the base of the pressure cooker. Function’s like a lift rack in a roaster and protects the table from heat damage.

As with many pressure cooker recipes, it’s mostly about the preparation. The cooking part is simple.

In this case, that means preparing the pot as well as the ham.

Add water according to the instructions and cover the bottom half of the ham with a seal of foil, so the juices don’t leak out. That’s the secret to creating moist and delectable Instant Pot ham. Retaining the juices in this reservoir is what it’s all about.

Cooking In The Juices

Given that you’re starting with a cooked ham is irrelevant. Ham cooking in the juices gives you the results you’re looking for.

This Instant Pot ham recipe contains nine basic ingredients. To give you an idea of how important the juices are, seven of those nine ingredients are juice related and one of them is actually the ham juice itself!

And when it comes to make the final glaze, it’s like “hamception”!

Long story short, without the juice, the sweet, savory and tangy elements of this dish would be lost and all you’d end up with is hot ham water.

Don’t get me wrong, I’m not knocking hot ham water. The point is, soaking ham in the juices is crucial. And to prevent leakage, it’s important there’s a good seal around the base of the ham.

Once that ham goes in the Instant Pot and those juices and essential ingredients are added, so begins the magical process of incredibly robust flavors. And that starts with the saturation of pineapple, honey and brown sugar combined with the natural juices of the meat as it cooks.

Foil traps the moisture so it can be used later for the glaze. The grand finale!

That top coat of delicious, sweet and tangy enamel delights the tongue and locks in what turns out to be the most, tender, moist ham inside.

Be sure and get that saucy mixture into all the pre-cut slices so every bit of the ham is enhanced and none of those delicious flavors are missed as it pressure cooks.

Part of what makes this Instant pot ham recipe unique and extra delicious is the crushed pineapple, making the sauce more chunky and pulpy. It also injects a ton more flavor into the ham while it cooks. Crushed pineapple is the secret to a much deeper and more enriched flavor profile.

While pineapple is essential in the cooking process, it should be discarded before making the final glaze. Although it’s edible, the reason is that crushed pineapple will affect the texture of the ham as well as it’s presentation.

For best results, carefully remove your ham from the Instant Pot after cooking, then lightly brush off remaining crushed pineapple before adding the final glaze and serving.

As you prepare the juice from the foil to make the final glaze, run it through a strainer to trap and filter out any pineapple chunks. Keep in mind you’ll require about a ¼ cup of the juices for the glaze.

Since you’re cooking a whole ham in Instant Pot, and the foil wrap is holding the juices, take great care when removing the meat from your Instant Pot.

First, note the inside of the pot will be very hot. Avoid touching the sides as you lift out the ham and make sure you get a good grip on the ham before lifting it out.

Use protective gloves and slowly lift the ham while pressing the foil firmly against the ham to prevent it from dropping. Without spilling the juices, remove the foil and prepare the ham for serving on a cutting board.

Once the Instant Pot ham is cooked and safely removed, all that’s left is making the final glaze, which is a combination of the ham’s natural juices and a few other ingredients added ahead of time. Save ¼ cup of strained ham juice and set aside.

Remove the trivet from the base of the Instant Pot and pour out the water. On the sauté setting, add the saved ham juice to the pot with a ¼ cup of brown sugar and ½ teaspoon of garlic powder.

Stir constantly and cook until the mixture becomes a thick glaze. And now for the crowning moment! Drizzle the glaze over the resting ham and serve.

What You Can Serve with Instant Pot Ham

Ideal for Easter brunch or a Sunday picnic too.

Ham pairs wonderfully with green vegetables like broccoli, green beans, asparagus or cabbage. And what’s a ham dinner without those beautiful mashed potatoes? Biscuits are born to be with ham. Potato salad or  pasta salad also make excellent sides.

For a well balanced meal, add ham to this sweet potato sheet pan dinner with brussels sprouts or our AMAZING Scalloped Potatoes or Scalloped Corn recipe.

Heck, here is a list of our favorites. Hopefully you find something you enjoy as much as we do.

What Side Dishes do I serve with ham?

How to Make Homemade Cornbread

How to Make Instant Pot Ham

Other Time: 20 minutes for pressure

Hopefully you were impressed with this Instant Pot ham recipe. Whether you were or not, there are a ton of other Instant Pot recipes to choose from. Here are some samples:

Until next time, stay safe! 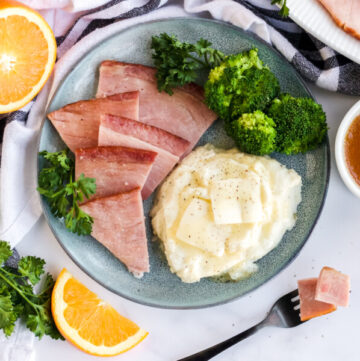