This brown sugar ham recipe with teriyaki glaze will delight the taste buds and impress your guests. With a combination of sweet and tangy, this brown sugar-glazed teriyaki ham is bursting at the seams with flavor! A simple recipe for a quiet dinner or a real crowd-pleaser for potlucks, holidays and get togethers. 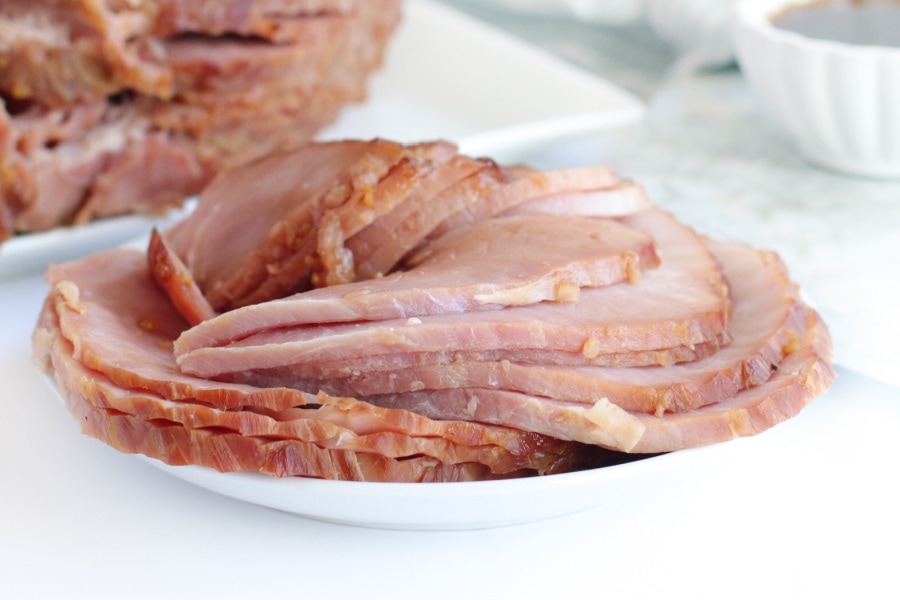 If you’re a lover of ham, you know what I’m talking about. In my world, ham has always been trendy. It never goes out of style. There’s a special place in my heart for sugar ham. Not only does it have that delicious. salty flavor ham is famous for, it has an added sweetness that puts it over the top. Plus with the leftovers, I can use other recipes to transform the ham into other delicious meals. And that’s something I’m always down for.

In a way this teriyaki glaze recipe reminded me of my dog, Lucille. Not that I fed it to her. That would not have been good. Due to illness, we had to put our other dog Biggie, down. I could see Lucille was lost without him. Ken had been away for a couple of days, visiting relatives and was on his way home. Knowing how much he adored this brown sugar teriyaki glazed ham, I was geared up to make it. Lucille wouldn’t t take her eyes off me. Call me crazy, but I started talking to her, explaining everything I was doing. She’d tilt her head one way and then the other. It was almost like she understood everything I was saying. In some ways, it was cathartic for both of us.

Ken came home to a lovely ham meal. I looked over at Lucille and I could have sworn she winked at me!

No family function or holiday would be complete without ham. It’s typically been the star of the show. Sugar-glazed ham has just the right amount of sweetness, that it keeps you coming back for more. Ham is a sure winner, anywhere, any time.

The big difference between this sugar ham recipe and others is the teriyaki glaze. It takes an already good-tasting ham and makes into an extraordinary one.

Every time I make this teriyaki-glazed ham, it gets rave reviews. Brown sugar and teriyaki sauce brings out the best in ham. They compliment each other beautifully. One bite and you’re hooked! 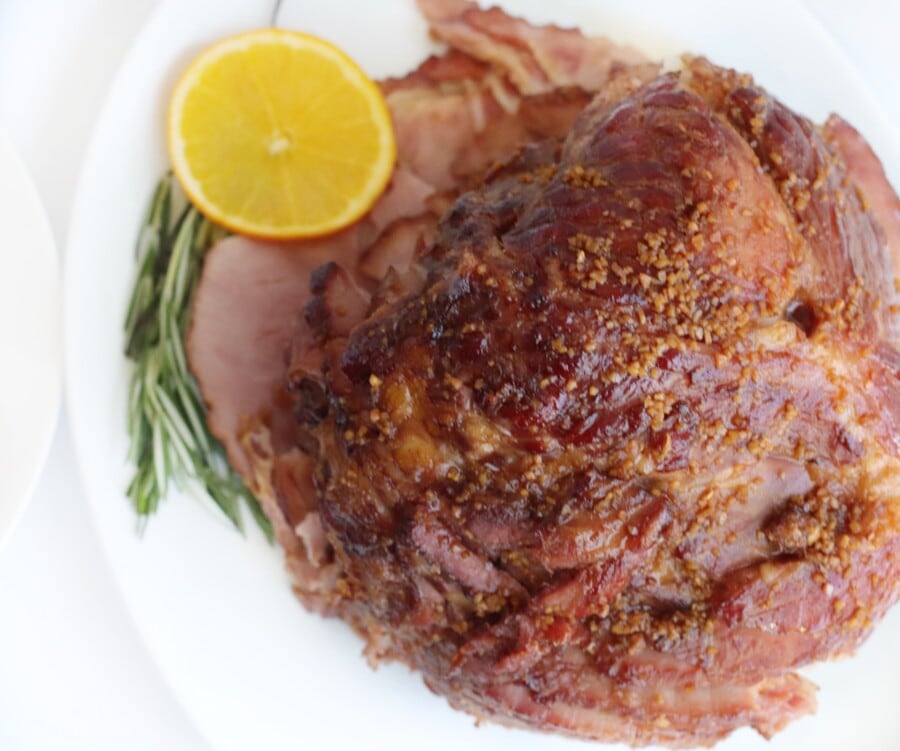 This brown sugar teriyaki glaze ham is loaded with flavor and taste. Five simple ingredients turns good-tasting ham into a phenomenal ham! From the meat itself to the glaze, this is one versatile dish that leaves room for plenty of leftover options to look forward to! After all, isn’t that what you want in a ham?

And with teriyaki glaze being so expansive and heavy on the flavor, it can be used on other types of meats and foods as well. Bonus! But, I digress.

It never ceases to amaze me that with a few ingredients, you can create a ham with sensational taste. Best of all, these ingredients can easily be found at your grocery store and, more than likely, already sitting in your kitchen waiting to be used. 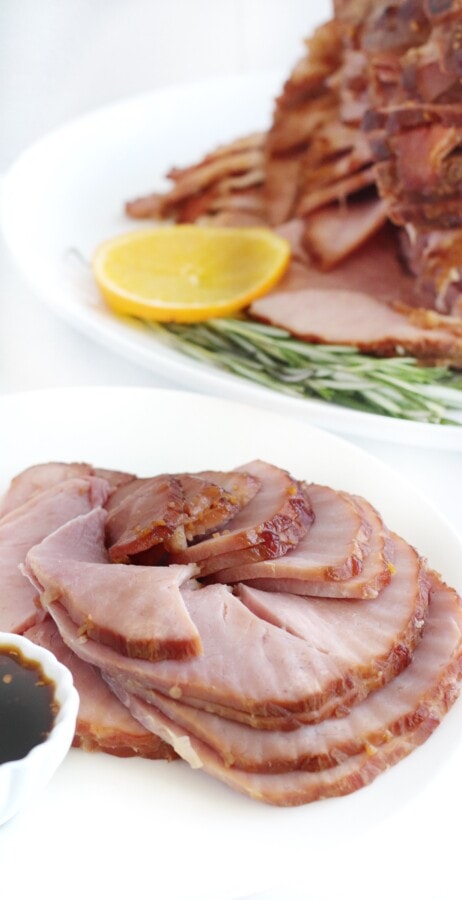 Cooking this ham is as straightforward as the ingredients themselves. Prep time is just 15 minutes and then let it bake for an hour and a half. First, rub the ham down with a nice, thick coating of brown sugar, wrap it tightly in aluminum foil, and then bake away. While it’s doing it’s thing in the oven, make the glaze, and then when it’s finished cooking, pour it over the ham. It’s as easy as that!

Can you use a precooked ham for this recipe?

Indeed you can! In fact, a precooked ham works tremendously well. Just make certain that you follow the reheating directions and then follow the steps of adding the glaze.

Using a precooked ham speeds up the entire process and there’s less to worry about. Make sure it gets nice and hot all the way through. This recipe is ridiculously easy.

What other recipes would taste great with teriyaki glaze?

One of the reasons why I love this recipe so much is that this teriyaki glaze tastes amazing in all types of ham recipes. Plus it goes great with pork and chicken dishes, too.

Why stop at ham when you have a glaze this good? Being able to mix and match my recipes with this extra boost of flavor is so nice to say the least!

Pour it over pork chops, chicken, lamb, beef strips and just about any vegetable you can think of. The flavor pretty much goes with anything. And your family will thank you for it!

What are some substitutes to use for glazing a ham?

Love the ham, but not the glaze? Not a problem. Change the glaze for something different. Honey and maple syrup can be used in the place of brown sugar and it does an amazing job of sealing in that sweet, tangy flavor. And due to the high-sugar content, it caramelizes beautifully!

How long does leftover ham last?

If you’re lucky, there’s some leftover ham to make another delicious dinner with. Ham can be stored in an airtight container in your fridge for three to five days. That is if you can hold out that long!

Or move it to the freezer to be enjoyed at a later time. Technically, ham can be kept frozen for a year, but for flavor-sake, you might want to consume it within four months.

Be sure and write down the date on the freezer bag or container, so you know how old it is.

Why is there pineapple juice in this glaze recipe?

In a nutshell, it adds sweetness! You might be pleasantly surprised at how much flavor it adds to this ham recipe. A little pineapple juice goes a long way and complements the flavor of the teriyaki. This classic  combination can be found in a lot of other dishes. Lucky us! 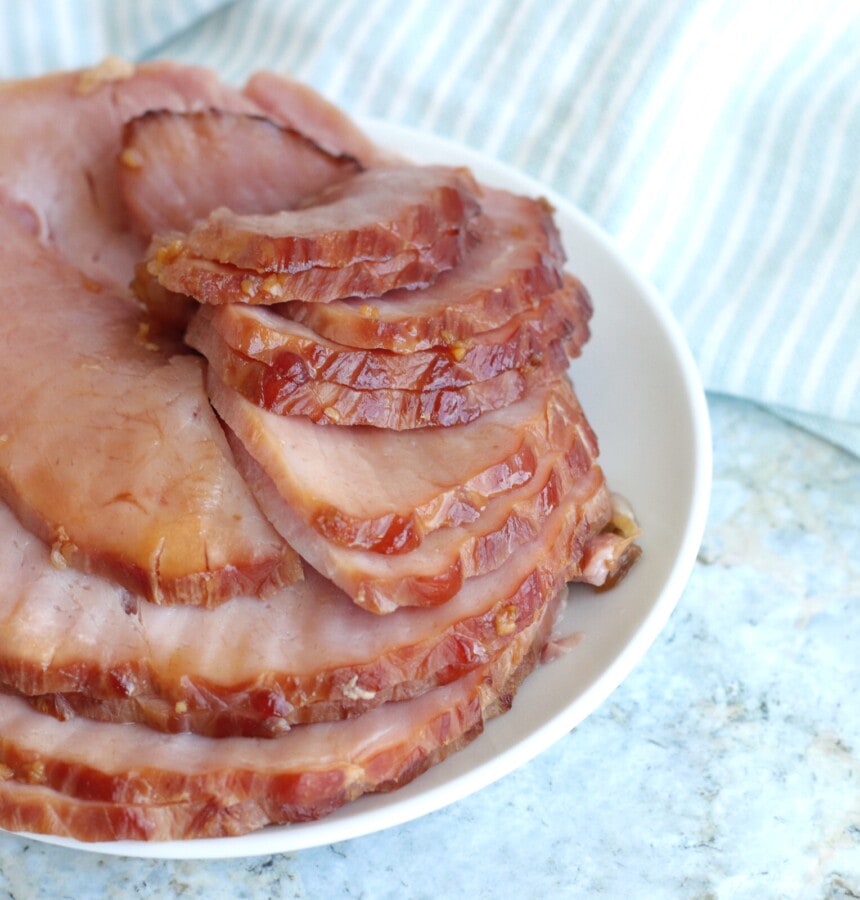 Ways to Use Leftover Ham

Leftover ham opens up so many possibilities! With a little bit of prep work, ham will work in a number of other recipes. Beginning with eggs, it’s fantastic in an omelet, scrambled and quiche. It’s divine on pizza, pasta, soup, casseroles or rice, and of course, on sandwiches. Dice up some ham and throw it into a pot of boxed macaroni and cheese. Hey, I wouldn’t say no to that!

Some recipes that use leftover ham include:

Ham can be supplemented in just about any recipe that calls for meat. With it being so versatile, you can think outside the box and make your own creation. As the saying goes, you’re only limited by your imagination and there’s plenty of that going around! 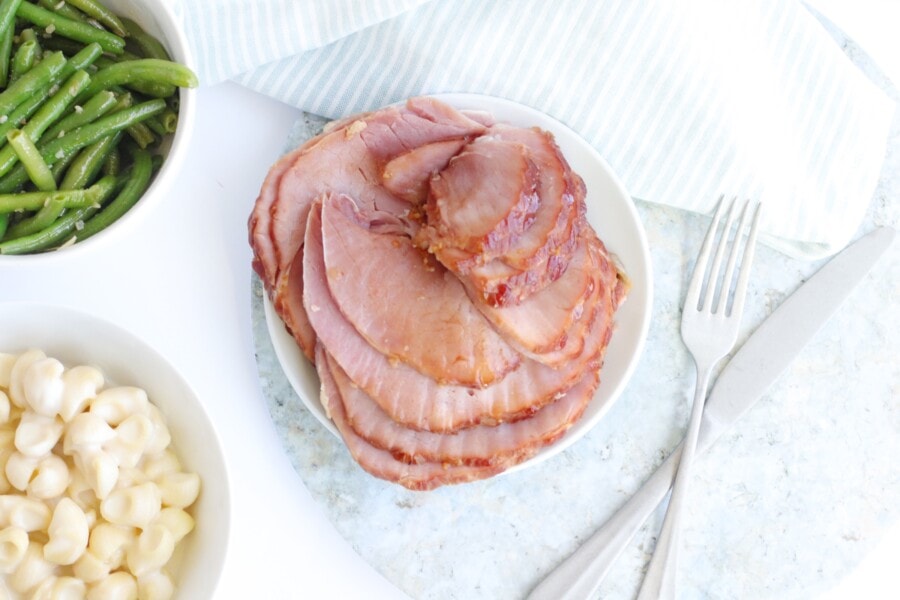 Such a simple recipe to follow, it’s nearly impossible not to make a delicious ham. That being said, there are some tips that will help ensure you get the most flavorful ham possible each and every time.

When baking the ham, make certain that the flat side is facing down in the pan.

As you make the glaze, be sure and whisk it constantly. It’s the heat that makes the ingredients all come together fast.

Whisking is important because you don’t want the glaze to be “grainy” or crystalized. Given that brown sugar is already crystalized, whisking is required the entire time or you end up with glaze that has that look and feel of sand. The taste will be there, but the texture will be off.

Do you add the ham glaze before cooking or after?

For this easy ham recipe, add the glaze after baking it. But do add the brown sugar rub before you bake it. Simple, right?

Do these two steps and have fun with it! It all comes down to flavor and this ham has it like no other.

Will the glaze harden up once baked?

While the ham bakes, the texture of the glaze will harden. The liquid aspect will still be there, but some parts of the ham will become somewhat hard. That’s okay as it’s the taste that counts.

What I love about this recipe is that it’s similar to barbecued meat where some areas are saucy and others have that tasty, crunchy layer. Overall, it makes for a nice textural variety, and those crispy bits are so flavorful, they make your mouth sing!

What are the most popular holidays that serve ham?

Come the holidays, ham really gets a chance to shine. Easter and Christmas tend to be the most popular occasions for a ham feast, but it’s a welcome sight any time of year!

Ham goes a long way and therefore is ideal for large gatherings.

Sometimes, the word “holiday” will be a random weekend when me and the gang are craving ham. Make ham once and the effects will last for days as you prepare other fantastic dishes with it. 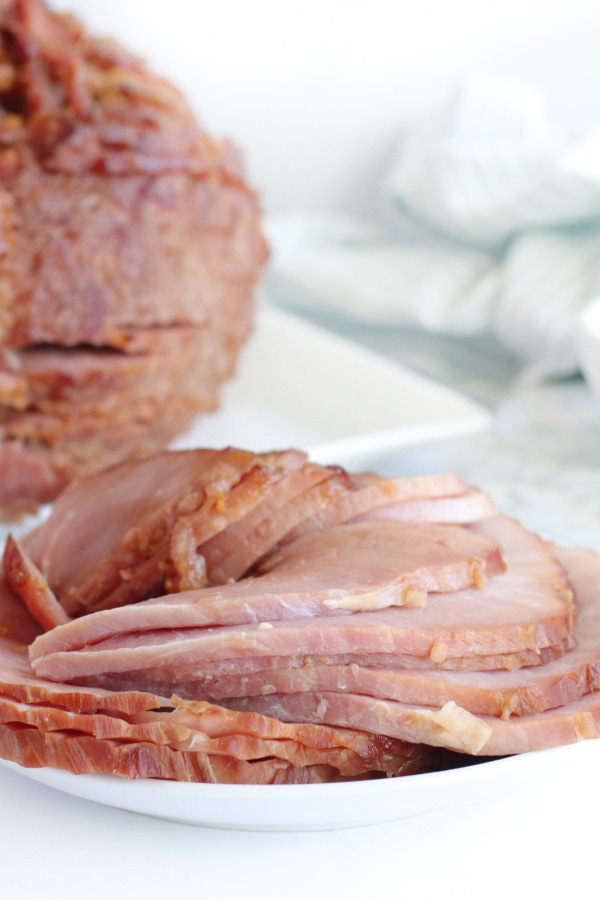 Don’t forget to share this ham recipe with all your family and friends! Once they get a taste of yours, they’re going to want to make their own. And can you blame them?

Whether serving it during the week, as a potluck, holiday spread, or some other special occasion, this brown sugar glazed ham rocks!

And if you like that teriyaki flavor, I’ve got plenty more recipes where that came from. 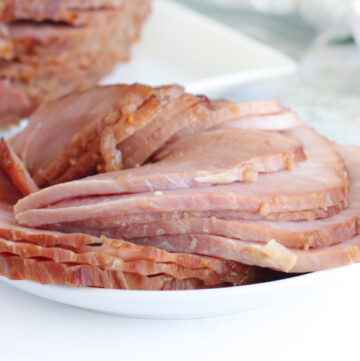 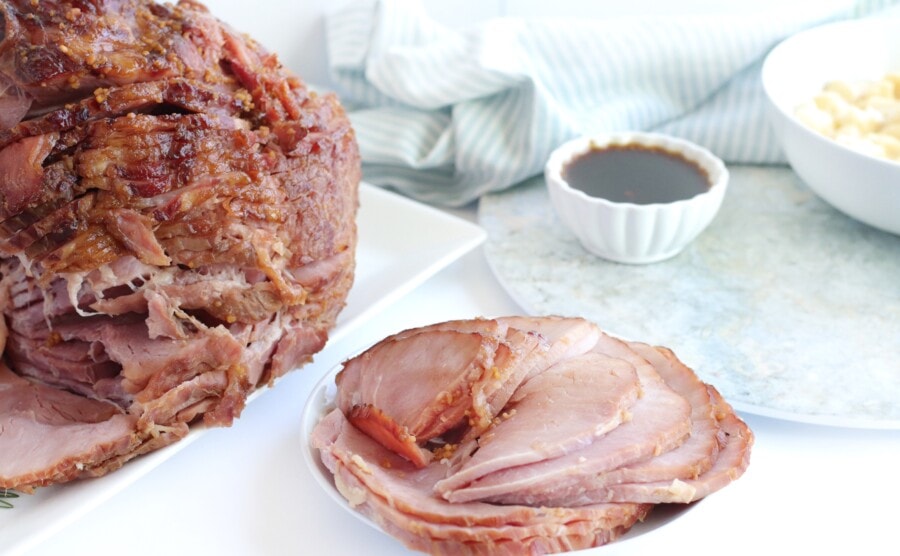