Honey mustard ham is sweet, tangy, and undeniably good. This honey and mustard baked ham recipe has all the smoky saltiness we all love in a ham. Plus the honey mustard sauce turns into the most mouth-watering glaze you’ll ever come across.

No matter the occasion, it’s a definite crowd-pleaser! 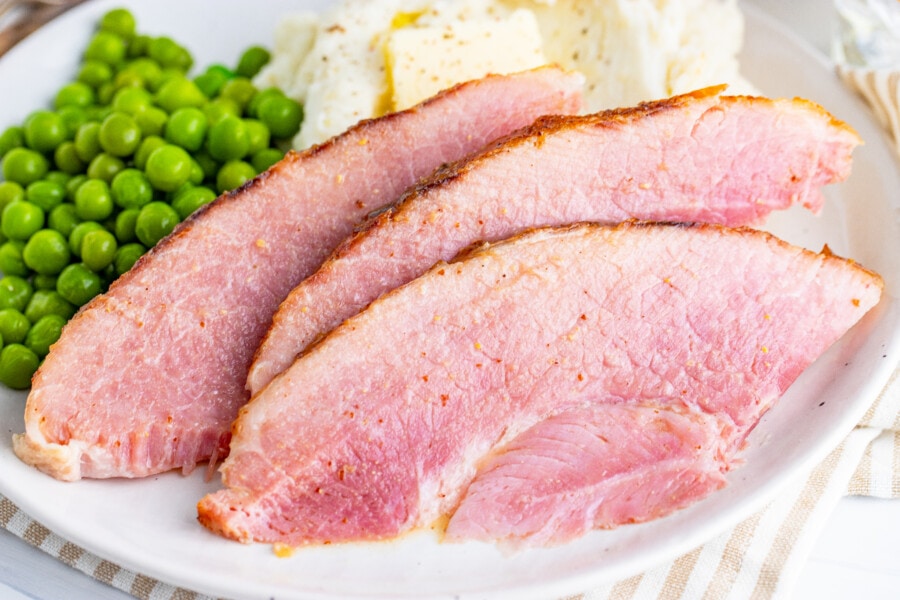 Can’t say enough good things about this honey mustard baked ham. In case you haven’t noticed; I’m crazy about ham; as a main dish, hot or cold, in sandwiches or with baked beans. Ham is such a versatile and flavorful meat, I’ll take it any which way I can.

Although I make several different ham recipes, this honey mustard baked ham is a definite heavy hitter in my house. My husband is always up for it and when my son gets word I’m making this baked ham, he finds an excuse to come over!

The same thing happened once with my BFF, Marcel, who suddenly made herself available to come over at dinner time. Given her love of ham and me knowing how good this baked honey mustard ham was going to be, I didn’t mind at all.

With a combination of salty, smoky, sweet and tangy, how can you go wrong in the flavor department? By the end of the process, you’re going to end up with one tasty ham that’s really tender to boot.

A perfect dish that keeps the family deeply satisfied and is ideal for potlucks, holiday gatherings, and more. No matter the occasion, honey mustard ham is a welcome sight. 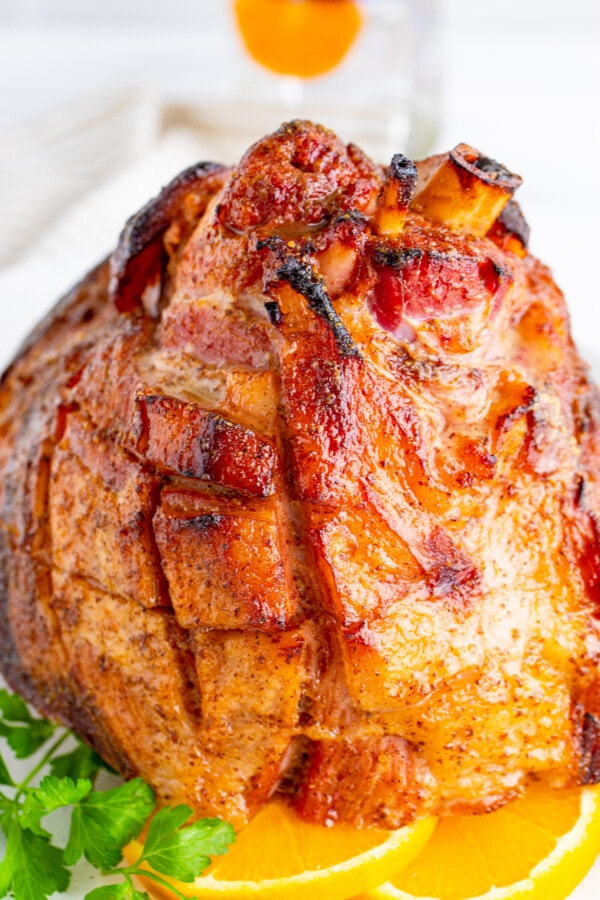 Ham has been around for as long as people have known how to cure meat. And honey mustard baked ham has existed for just about as long.

Preserving pork leg as ham has been done for centuries. In 160 BCE (before the common era), a Roman soldier, senator and historian by the name of Cato the Elder wrote about the “salting of hams” in his De Agri Cultura tome (a book about his knowledge and experiences about capitalist farming).

Some claim the Chinese were the first people to mention the production of cured ham. Still, others stated that ham originated in Gaul (modern day France). Whoever is responsible for inventing the practice of curing ham, we owe them a lot of thanks and glad it’s still alive and well today.

Honey mustard ham dates back to the 1600s, but the two ingredients used to make it – honey and mustard – have been used in cooking for centuries. Honey has been used as food throughout all of recorded history, and it was probably used as food long before that.

Honey is the only food on the planet that doesn’t spoil! Although it may crystalize, it’s one of those foods you never have to toss. How cool is that?

Mustard has been around for centuries. There are Roman writings dating back to 42 AD that reference mustard in recipes; although it didn’t become widely popular until the seeds were exported by the Romans to Gaul (France).

Incredibly popular as a cooking ingredient, mustard was also common among food peddlers as early as the 13th century. By the 1600s, mustard had legal protection for recipes and recipe makers in France.

French cooks added a type of green grape juice in place of vinegar in their recipes, that resulted in a milder flavor reminiscent of what we now know as Dijon mustard. Not long after, cooks began mixing mustard and honey together that created a combination of sweet and tangy in their dishes.

There’s no question who the stars of the show are in this delicious honey mustard baked ham. When it comes to honey and mustard, opposites definitely attract. Add in ham’s smokiness and saltiness and you’ve got dynamic flavors all rolled into one!

The glaze adds a bit of texture and some areas of the ham will get a very dark giving it a crispy coating similar to barbecued meat. 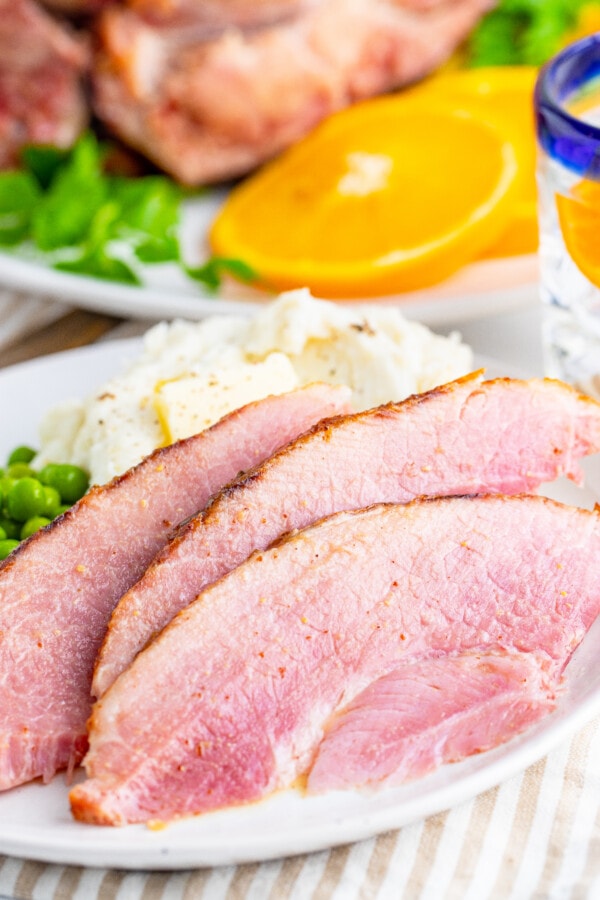 With just 9 ingredients, you can make an easy, incredibly delicious ham. Most of these are common ingredients that you likely have sitting in your pantry.

The only thing you’ll probably need to buy is the ham itself and perhaps the beer. Here’s everything you need to make this honey mustard baked ham:

Combining all of these wonderful ingredients, results in a delicious and deeply flavorful glaze that helps keep the ham really moist and tender. Could you ask for anything better than that?

Except for the ham, all of the ingredients are dedicated to making one of the best glazes you’ll ever make! Apart from the ham, the only cooking required is the glaze itself. Simply simmer these ingredients until smooth. Then gently brush it over the ham before baking.

Here’s a general overview. The full recipe is at the end of the post.

That just about covers it! Of course, there’s a touch more involved, but not much. Refer to the recipe below for the measurements and more detailed instructions.

Baking honey and mustard ham doesn’t require any cooking experience, really. Both advanced and beginners alike find this recipe a breeze, and it turns out exactly the way it should every time.

It all boils down (pun intended 😉) to simmering the sauce, brushing it onto the ham, and then baking it. That being said, there are a few things to remember to ensure the best possible outcome.

Be Patient with the Sauce

It’s incredibly tempting to rush through the process when making this sauce. As I said, there’s not much cooking involved, but we’re all so busy that it’s easy to fall into the trap of “faster is better”. That’s not the case with this glaze,

Taking the required time to make this glaze sauce, is going to be the pay off. Bring it to a simmer on medium-heat and then reduce it to a simmer, stirring until it’s nice and smooth.

Rushing through it will be result in a grainy sauce because the brown sugar crystallizes. For the best glaze texture, the sugar needs to fully dissolve and incorporate.

Hit it with the Broiler

Placing the glaze-covered ham under the broiler at the end is not necessary, but it will give you a caramelized, crusty layer that you only expect from barbecued meats.

This gives the honey mustard ham added texture and flavor; along with some nice, crunchy bits to boot.

Make it Even Easier with a Spiral Ham

Although this recipe calls for a shank-end smoked ham, you can also use a spiral ham. Spiral hams are pre-cooked and pre-cut, making the task even simpler.

With a ham like this, your only worry is getting it nice and hot. Given that it’s fully-cooked, there’s no need for a thermometer because it just needs to heat up.

Be Patient with Serving

After roughly 3 hours of smelling that delicious honey mustard baked ham cooking, the temptation to dive straight into it will be great. Don’t do it!

Ham needs resting time (about 20 minutes) to allow all those juices to settle and seal in the flavor.

This is especially important when using a whole uncooked ham. Allowing the juices to incorporate before slicing, is vitally important. 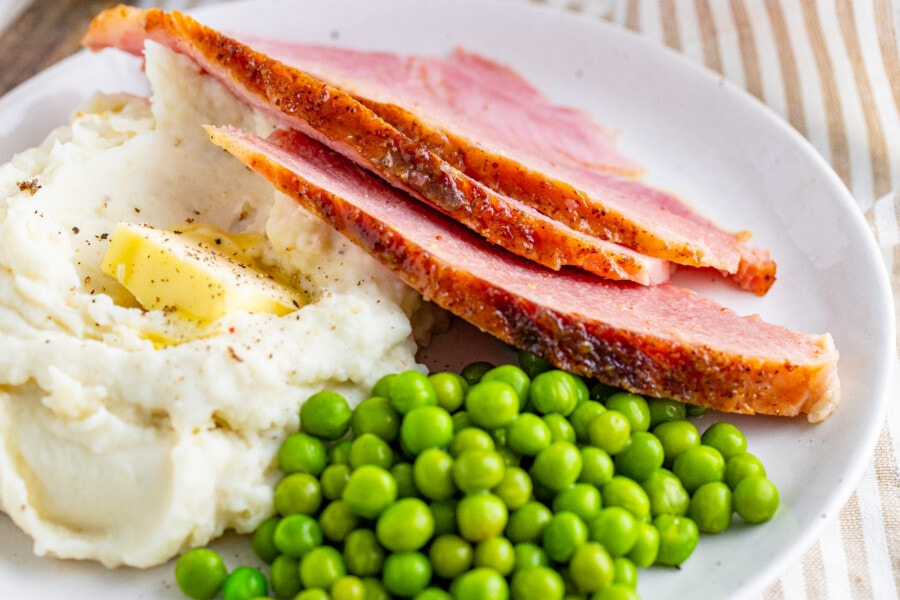 While I love this recipe exactly as it is, there are a few honey mustard baked ham substitutions you can make if you so desire. Although these substitutes will change the flavor of the ham somewhat, they’re equally as tasty as the original!

Apple juice is what’s called for in this recipe, but feel free to use other juices to change things up. For a citrus kick, try pineapple or orange juice. White grape juice is another great choice as well.

Move over brown sugar. Maple syrup is in town and it’s a great alternative. We’re talking the real McCoy here. Not the fake stuff. With its own unique flavor, it makes for a fabulous glaze and it browns beautifully!

Leave Out the Cloves

Some people don’t care for taste of cloves and, given its strong flavor, that’s perfectly understandable. The good news is that they’re not needed in this recipe. But if you’re a fan, they add fabulous flavor to the glaze. 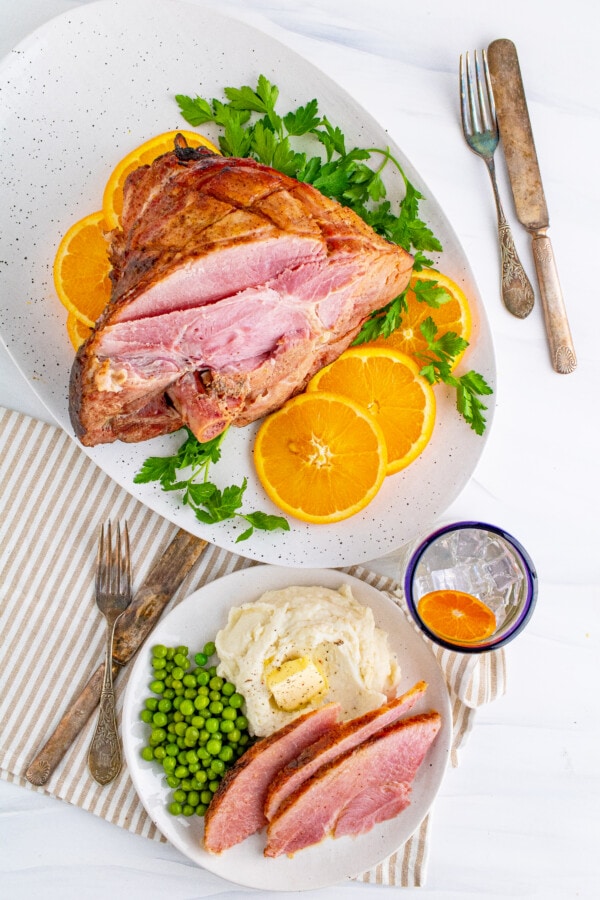 Ham of any kind is an all-time classic that go well with the standard sides. As you can see in the photos, mashed potatoes and peas are definite classics that work well with ham. Why mess with perfection?

Pair ham with other classic veggies like carrots and asparagus. Really, though, ham goes with a thousand things. So feel free to serve it with any vegetable or side dish you like.

Store this delicious honey mustard baked ham in your refrigerator in an air-tight container for up to 4 days.

If you’re anything like my family and friends, ham gets devoured pretty quickly. So, the chances of it lasting in the fridge that long is slim to none!

To freeze, double wrap ham in butcher paper or place in heavy-duty freezer bags and it will keep in the freezer for up to 4 months.

Technically, ham can be kept frozen for over a year. But for flavor reasons, it’s best to use up within 4 months.

Ending up with leftovers is a really good thing because it expands your ham recipe profile. Leftover ham is marvelous as it’s had time for the flavors to really sink in. And ham is one of those meats that goes with just about anything. You can make all kinds of things with it.

Leftover ham sandwiches, mac and cheese, casseroles, omelets, pastas and soups, just to name a few. Eating it plain by the forkfuls is something I’ve done often. Yum. No shame there!

The big takeaway is get creative with the leftovers. Ham can be substituted in almost any recipe that calls for meat. That’s how versatile and comparable it is.

Honey mustard baked ham is usually associated with get-togethers and holidays, but it actually makes a great routine family meal!

Again, with leftovers, you get to create even more dishes and that in itself, is a huge bonus! If you can’t decide what to do with the leftovers, freeze until you can come up with other recipes. There’s no shortage of them.

Because this recipe is so darn delicious and adaptable, it’s one you’ll want to make over and over again. With great flavor and so many different possibilities, this recipe is a sure winner from the first day to the last! 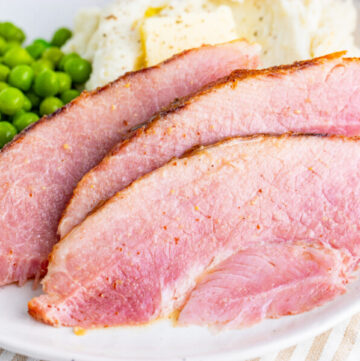 This honey mustard baked ham is so delicious and so easy to make. Honey mustard sauce adds such depth and flavor, it's on just about everyone's menu.
Print Recipe Pin Recipe
Course Main Course
Cuisine American

Keyword baked ham, ham dinner, honey mustard
Tried this recipe?Let us know how it was! 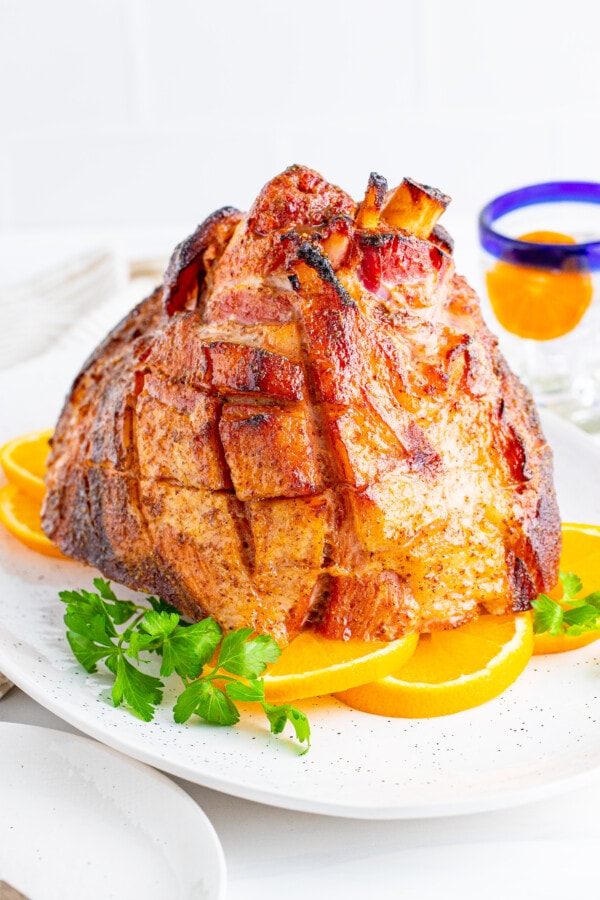