This boneless spiral ham recipe is so easy to make and serve. This maple dijon ham is sweet, tangy and so full of flavor. Once you taste the flavor of this maple mustard ham recipe, you’ll wonder how you ever made any other ham recipe at all. 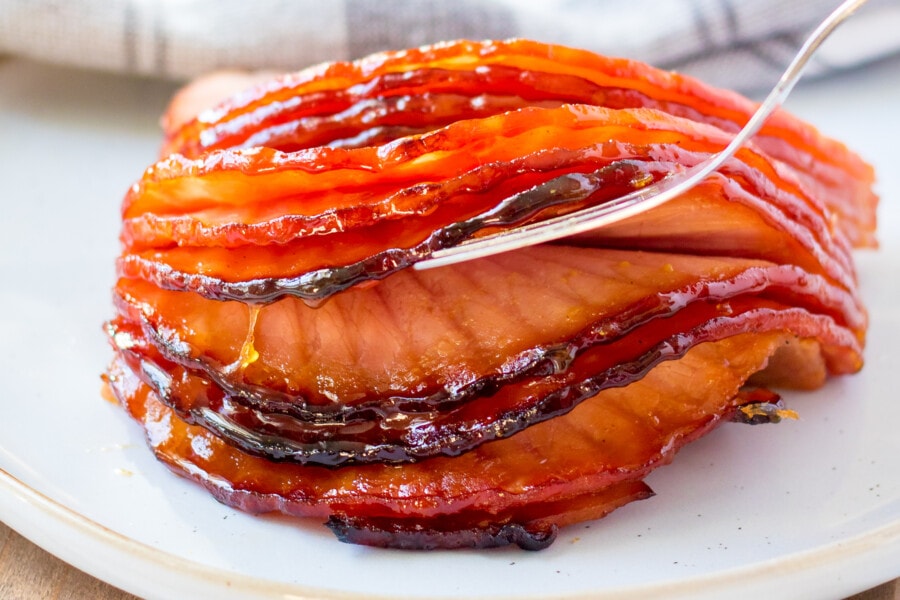 I’m all about ham. I love all types of flavors and glazes when it comes to ham but I do have to say that this maple mustard ham is one of my favorites. Not only does it give that “sticky” glaze that I love to eat but it also gives the ham the perfect sweet and salty combination, too. And let’s not forget how ridiculously easy it is to make!

There aren’t many recipes out there that leave my tongue wagging for more but this is one of them for sure.

The next time that you’re craving a simple ham recipe that won’t disappoint, I really suggest that you give this simple recipe a try. Not only is it fast and easy to do but you can easily make it in a short amount of time.

I also love that it’s easily enough to feed a family or several people at once. This has to be one of the fastest ways to cook up a ham for a nice holiday meal, Sunday dinner or just an efficient way to feed a crowd. It’s the ultimate main dish for a quick and easy dinner or welcome addition to a holiday spread.

And since you only need four easy ingredients to make this ham recipe, there’s no reason that you can’t make this today, even when you’re running short on time.

Boneless Spiral Ham is the Perfect Recipe for any Occasion

One of the best things about any boneless spiral ham recipe is how easy it is to make. The absence of a bone means less cooking time. Being spiral-sliced means you don’t have to worry about slicing up the ham after it’s cooked. It really is incredibly easy. This maple dijon ham is so easy and so delicious, it’s perfect for any occasion. Serve this ham for a weeknight meal or use it as a quick and easy addition to any holiday table setting or potluck. The flavors are perfect for any time of year, making it a winner no matter the occasion. 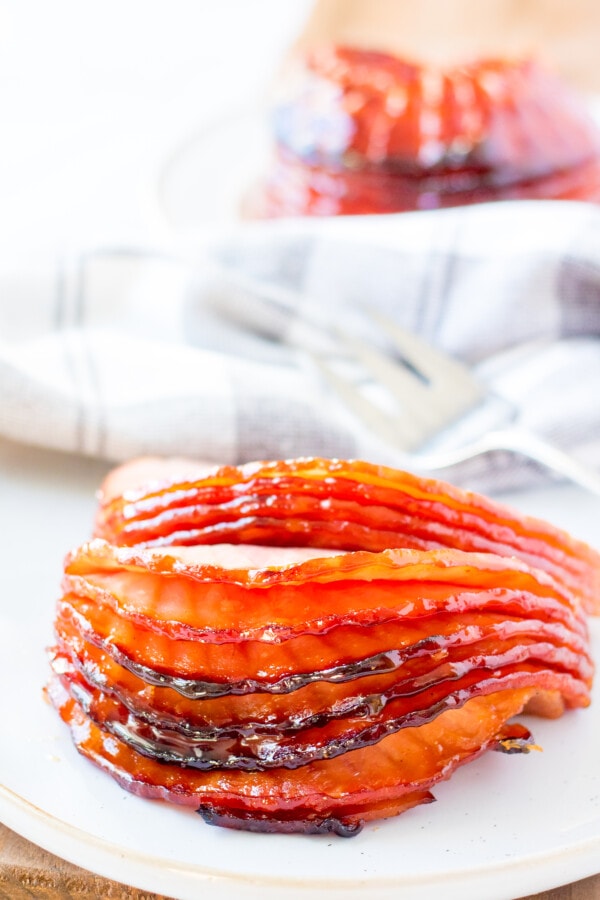 It’s actually the perfect combination of both. And this is probably why this Maple Dijon Boneless Spiral Ham Recipe is one of my favorites. The sweet and salty pairing is literally perfect together, and that’s not an exaggeration at all. The tanginess of the dijon pairs so well with the brown sugar to create a flavor profile that blends wonderfully with the saltiness of the ham. And the delicious, sticky glaze can’t be beat. You really have to try it.

If you’re looking for a super simple ham recipe that hits all the flavor notes, this maple mustard ham does that and so much more. The delicious salty, sweet and tangy flavor goes well with just about everything, so it’s always a great choice.

How do I get a ham glaze that gives that sticky texture?

The sticky texture is all about the brown sugar. This is the key ingredient to getting your glaze to be “sticky.” The heat combined with the brown sugar caramelizes and creates that texture.

By the way, this is the same concept for when you’re BBQing ribs on the grill. You want to use a BBQ sauce that is higher in brown sugar for that very reason.

What side dishes go well with ham?

In my opinion, just about everything goes well with ham! Mashed potatoes, green beans, broccoli, cauliflower, asparagus—really any vegetable at all—goes well with this boneless spiral ham recipe. That sweet and tangy flavor pairs perfectly with just about anything from vegetables to classic holiday sides like cauliflower casserole.

If you’re looking for specifics, here are some great side dish options that you can easily pair maple mustard ham with.

And those are just a few great pairings you can try. Any type of vegetable or potato dish is going to go perfectly. Or, if you’re like me, you can just enjoy eating the ham without anything else! 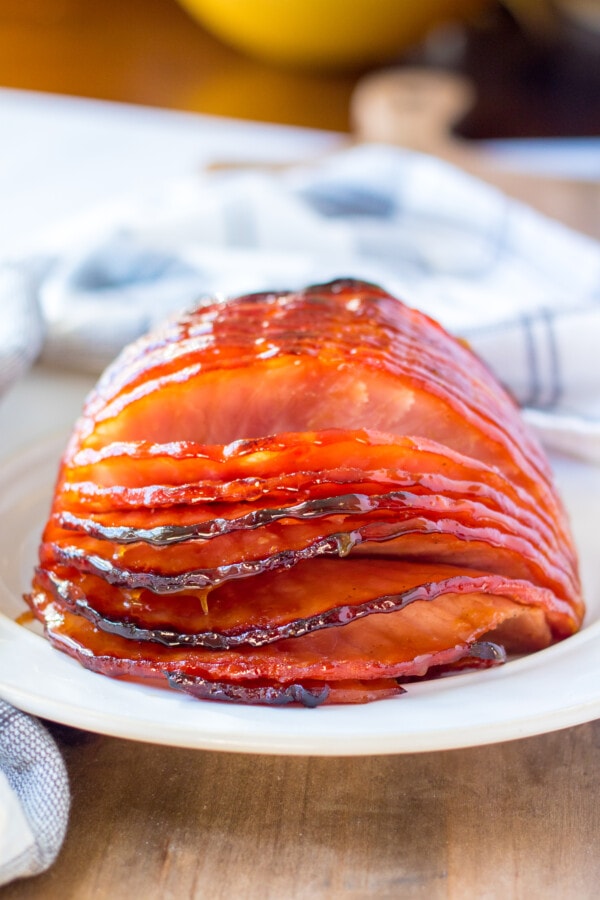 Can I share a little secret with you? Sometimes I buy a ham WAY bigger than I need because I love using it for leftovers over the next few days. Shocking, right?

It’s just that knowing that I have a cooked ham in my fridge brings me comfort and means that the next few days are going to be all about snacking fun.

One of the easiest leftover ham recipes I have just so happens to be ham salad, but that’s just where the leftover fun starts. There’s nothing better than baking up a loaf of homemade bread and topping it with ham and mayo. I’m hungry just thinking about it!

That’s just an example of how you can use leftover ham. There are so many more ways. For example, this maple dijon ham is delicious mixed into rice. That tasty glaze makes a sort of quasi-sweet and sour thing happen when it hits the rice.

You can also use leftover ham in omelets, fried in a pan, and a lot more!

You can store this ham in the refrigerator in an airtight container for three or four days.

For longer storage, you can freeze your ham. There’s no reason that you can’t enjoy your ham now and enjoy it later on down the road as well!

One big tip to keep in mind is that it’s a good idea to freeze in serving sizes. That way, when you’re ready to enjoy your ham, you can easily just freeze a little bit of it to use and not have to unfreeze it all at once.

To properly freeze your ham, double wrap it in butcher paper or wrap it in cling wrap and place it in a heavy-duty freezer bag. It will keep for up to six months and retain all of its flavor. You can technically freeze the ham for up to a year, but after six months, the flavor will begin to deteriorate. 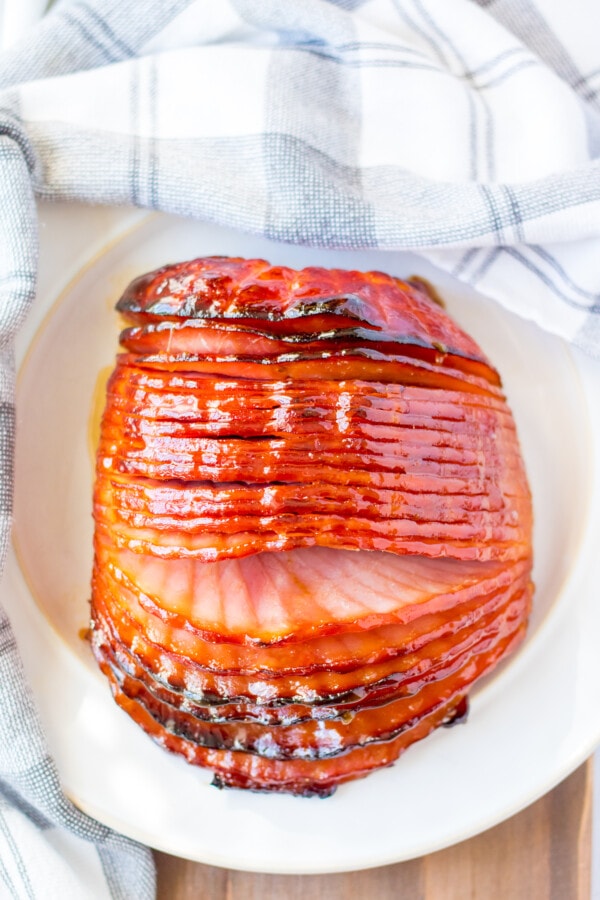 As I mentioned earlier, you just need four simple ingredients to make this delicious ham recipe.

The combination of brown sugar, dijon mustard, and maple syrup is key!

Every part of this recipe is incredibly easy. In fact, it all comes down to mixing the ingredients for the glaze and then heating it all up. It’s really that simple! 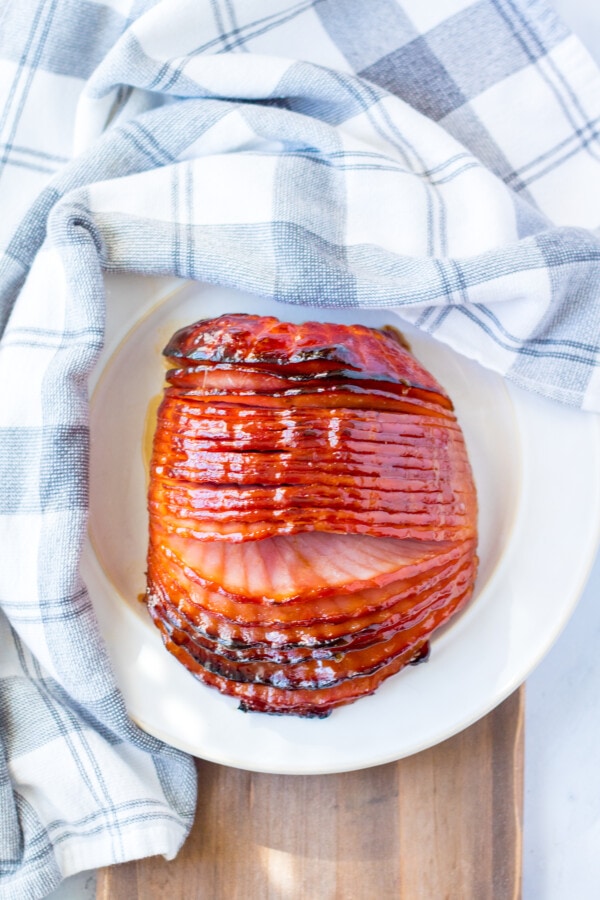 You’ll find that this recipe is pretty straightforward and easy to make but there are a few things to keep in mind.

These tips all revolve around one thing: a slow and steady approach.

This delicious maple dijon ham is so easy to make, there’s no need at all to rush the process. In fact, if you rush this recipe, you won’t get the kind of ham you and your family deserve.

Make certain that you stir the ingredients well for the glaze so that it’s lump-free and easy to pour. You also want to be certain that you bring it to a bubble on the stove as this is what gives it that crystallization on the ham that you’re going for. Do NOT rush this part! Getting the glaze to bubble is absolutely key. If it doesn’t bubble, you won’t get the kind of glaze you want for this delicious boneless spiral ham recipe.

Applying the Glaze to the Ham

You might be tempted to just dump the entire pan of the glaze over the top of the ham, but spooning it on slowly is better. This gives it time to cool a bit more and more of it will stick on the ham that way. Make certain to save some back so that you can add on some more later. 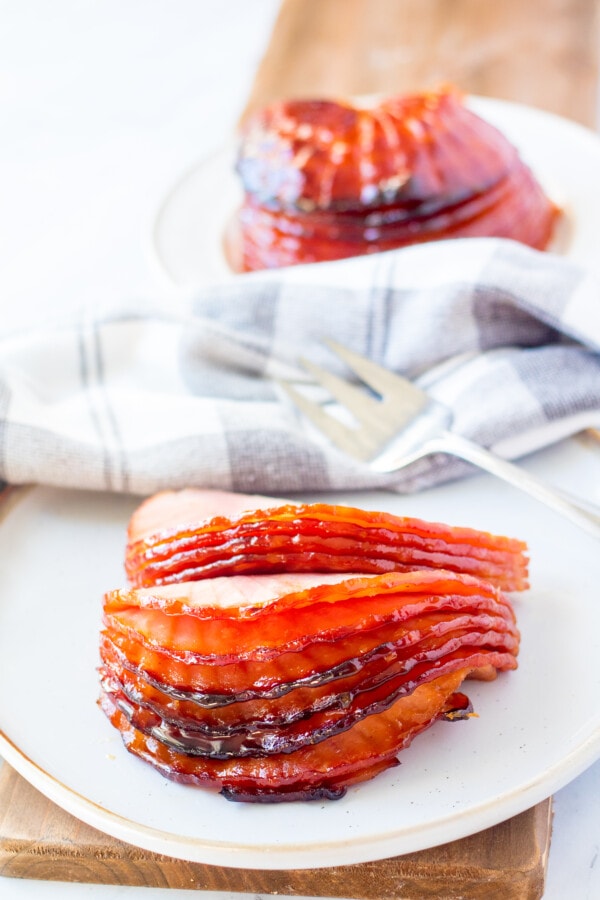 How do I know when the boneless spiral ham is heated all the way through?

Since the ham that you’ll be using is already cooked, you really just need to be certain that you follow the directions on the package of the ham and heat it to the temperature that it suggests.

You can easily use a meat thermometer to test the temperature of the ham to be certain that you’re not overcooking or underheating, either.

Pay close attention to the printable directions below as it gives you a great process to follow. You can’t undercook the ham, as it’s already fully cooked. It just won’t be hot enough. However, you can overcook the ham which will make it dried out but if you do, don’t fret. This is where the maple glaze will actually help and bring back some of that moisture that the ham is lacking. 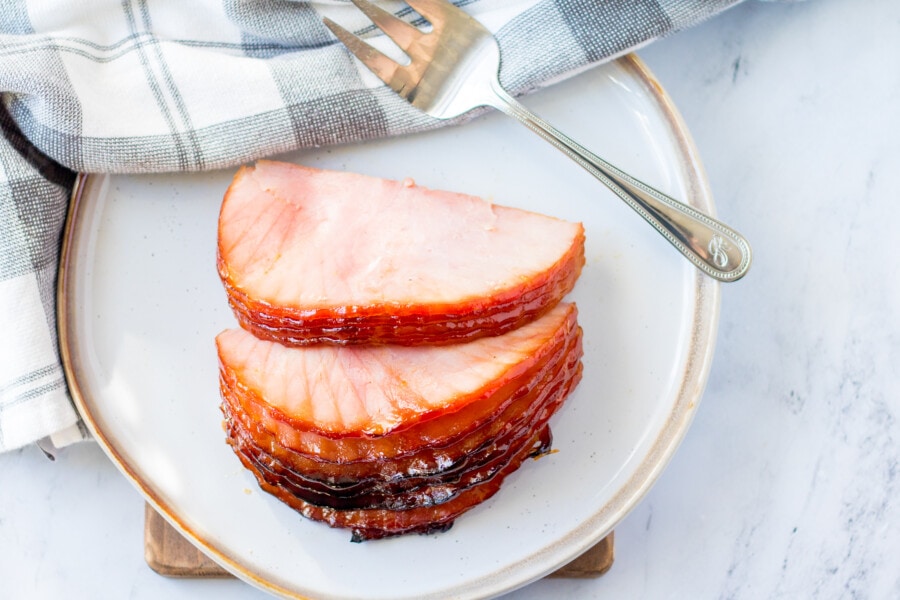 This boneless spiral ham recipe is so delicious and so easy to make, you owe it to yourself to give it a try. With the tanginess of dijon mustard, the sweetness of maple, and the saltiness of the ham all working together, you’ll end up with a ham that is a winner whether it’s made for a weeknight meal or a holiday dish.

Have fun making this Maple Dijon Boneless Spiral Ham recipe. It’s a super simple recipe that you can easily cook that has an awesome taste and flavor.

Looking for side dishes to serve with ham? Check out our Easy Ham Side Dishes That’ll Have You Hungry For More. I think you’ll be glad you did. 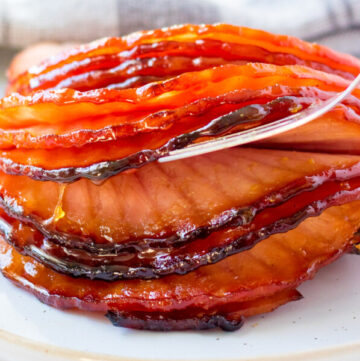 Once you get that goodness of this Maple Dijon Boneless Spiral Ham recipe in your memory bank, it's one recipe that you'll never forget!
Print Recipe Pin Recipe
Course Main Course
Cuisine American

Keyword baked ham, dijon, glazed, maple
Tried this recipe?Let us know how it was!