These ham salad pinwheels are simple to make and pack a punch of delicious flavor that everyone loves. Served as either pinwheel sandwiches or ham salad wraps, these are easy to make and feature two versions of an easy ham salad recipe that you can make yourself. 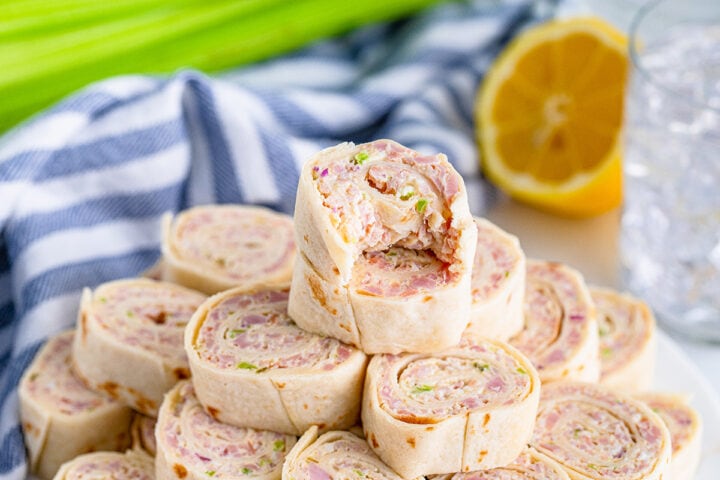 Ham salad is one of my favorite things to make. It’s the perfect appetizer for parties or filling for meals like sandwiches. I make a lot of ham to begin with, so an easy ham salad recipe just makes sense for me and my family.

Unlike a lot of people, I make ham year-round. I love to make it for dinner and then use the leftovers for everything from sandwiches to dips.

Heck, my husband has even been known to smoke a ham from time to time. It’s just such a delicious cut of meat, I’m actually surprised that people don’t make it more often. Why wait until a holiday?

I’ve been enjoying ham ever since I was a child. I got my love of ham and my tendency to make it pretty much any time of year from my mom. She was never a believer in waiting to make delicious food until a holiday rolled around.

After I grew up and moved out, I continued to make ham and turkey throughout the year. Both of these are excellent meals when you’re single because you can get smaller hams and turkeys and then use the leftovers for other dishes.

One of the best things about all that meat is the leftovers. You can do so much with both of these as leftovers. Sandwiches, spreads, pot pies – the possibilities are almost endless. It’s a great way to stretch your food while always having delicious meals on hand. 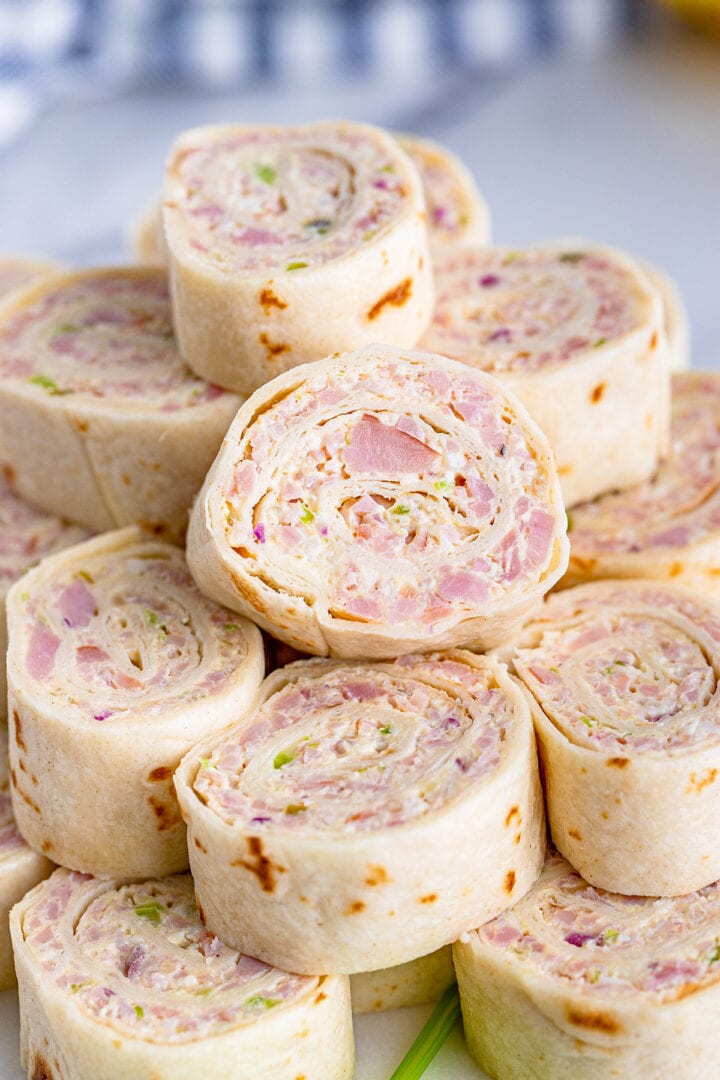 Rolling Through the History of Pinwheels

These ham salad pinwheels are some of the tastiest pinwheel sandwiches you’ll ever have. But were it not for wraps and pinwheels, we wouldn’t have this particular variety.

These pinwheels are nothing more than ham salad wraps that have been cut into medallions, so I want to take a moment to talk about both pinwheels and wraps. I find it so interesting to learn about the foods I cook and eat.

If you’re not that into food history, feel free to skip over this section, as it won’t have anything in it that pertains to actually making the recipe that comes later.

People in Mexico, the Mediterranean, and South Asia have been eating wraps since before the 1900s. Perhaps the most recognized pre-Americanized wrap is the burrito which originated in Mexico. In fact, the burrito is the inspiration for the modern-day wrap.

However, the wrap as North Americans know it today was developed sometime in the early 1980s. There are two disputed theories on where it was actually invented first.

Some claim that wrap as we know it, an Americanized version of Mexican and Tex-Mex burritos, was invented at a southern California chain called “I Love Juicy”.

However, Bobby Valentine, sports icon and owner of The Bobby Valentine Sports Gallery Cafe in Stamford, Connecticut claims to have invented the wrap at about the same time.

Wherever the first wrap originated, one thing’s for sure, it was a tasty invention!

Pinwheels are just another kind of sandwich, but where and when was the idea to roll a sandwich instead of just slap two pieces of bread around fillings thought up? The pinwheel is an English creation dating back all the way to the 10th century.

Back then, the English enjoyed pinwheel sandwiches as snacks that they paired with a hot cup of tea. According to history, these pinwheels were likened to the French canape.

When these sandwiches were first invented, people use simple ingredients like butter or cream cheese as the filling and rolled them up with bread slices. Of course, over the centuries, more and more unique ingredients were tried for both the filling and the wrapping itself.

Over time, people created all kinds of pinwheels, which is how we came to the modern version of pinwheel sandwiches that so many of us enjoy today! 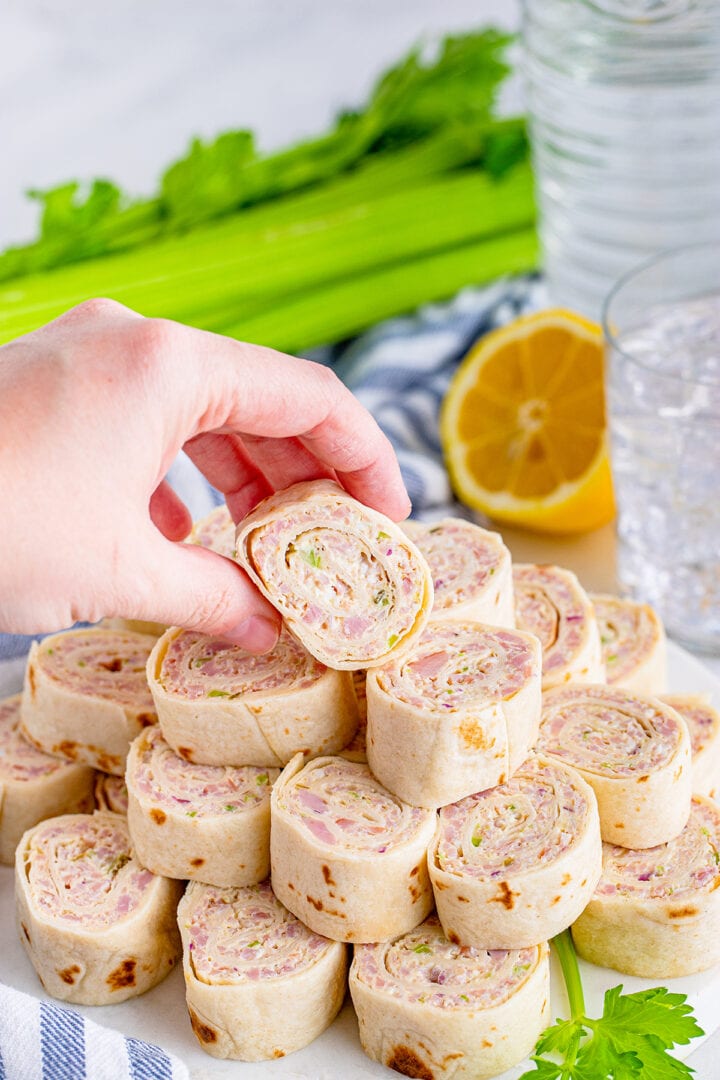 These delicious pinwheel sandwiches are made with an easy ham salad recipe that anyone can make without any trouble whatsoever. Delicious ham and other ingredients are combined into a ham salad and then slathered over tortillas.

After that, they’re rolled into ham salad wraps and then cut crosswise into sections to create the ham salad pinwheels.

These pinwheels are the kind of recipe that always hits the spot. They’re full of flavor, easy and fun to eat, and they take next to no time at all to make. The most labor-intensive part of the entire dish is making the ham salad, and even that is super easy to do!

One bit of these delicious pinwheels, and you’ll be making them for lunches, dinners, parties, and for any other reason you can think of!

There are no complicated ingredients to this recipe. The ham salad uses super simple ingredients, many of which are probably already in your kitchen.

If you have to shop for any ingredients, you’ll find them all quite easily at your grocery store. Here’s what you’ll need.

For the Wraps Using the Modified Ham Salad Recipe

That’s all there is to it. As you can see, the ingredients for this recipe are extremely simple. In fact, most of them are kitchen staples. If you happen to have ham leftovers on hand, you probably won’t have to shop at all! 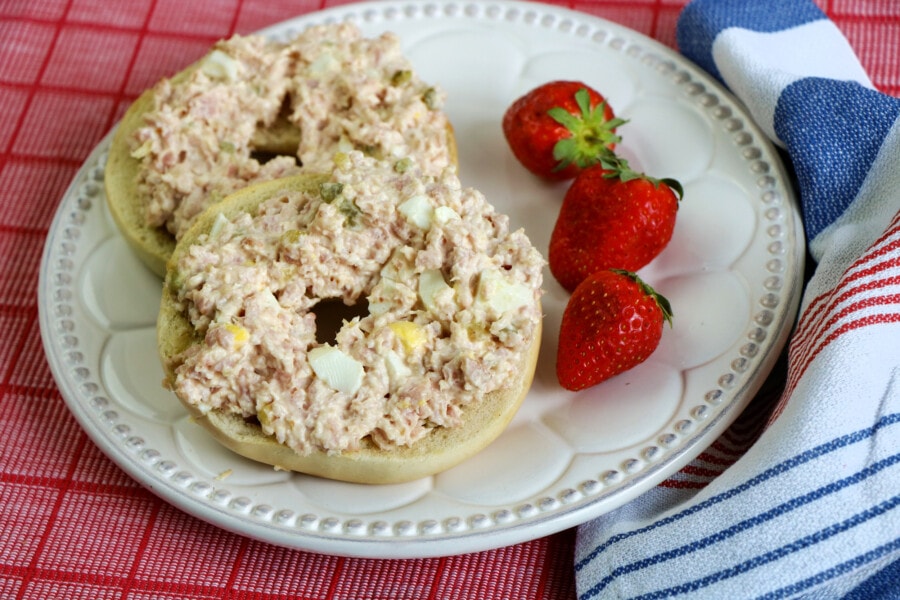 I love making my ham salad pinwheels with this easy ham salad recipe, but if I’m cooking for a crowd, I’ll make ham salad because it doubles as a spread or a dip as well. Making this easy recipe is as simple as gathering the ingredients.

You’ll simply be mixing everything together for the most part.

The modified version of this ham salad recipe is perfect for making my pinwheel sandwiches. It’s a bit chunkier, so it won’t work very well as a dip or spread. Use this version if you’re only making the ham salad pinwheels.

That’s all there is to it! You can see that it’s incredibly easy to do. You’ll be in and out of the kitchen in no time!

Whether I’m making these pinwheel sandwiches as appetizers or a main course, I always serve them in the same way. Simply set out a tray of them and let everyone take as many as they want! I love to set out bowls of various dipping sauces to go along with them.

Things like tzatziki sauce and ranch dressing are always good options for these pinwheels.

I also tend to set out both ham salad pinwheels and ham salad wraps on the tray so that people can have as much or as little as they want. Big eaters tend to grab the wraps, while those who like a variety of foods on their plates gravitate toward the pinwheels.

I just find that it makes things more fun and interesting to include both.

Although, it should be noted that after about three days, the tortillas will start to get soggy.

You’ll have to eat them before that time, as you can’t freeze these ham salad pinwheels. They don’t freeze well at all, so don’t even try it. You’ll end up with something that is not appetizing in the least. 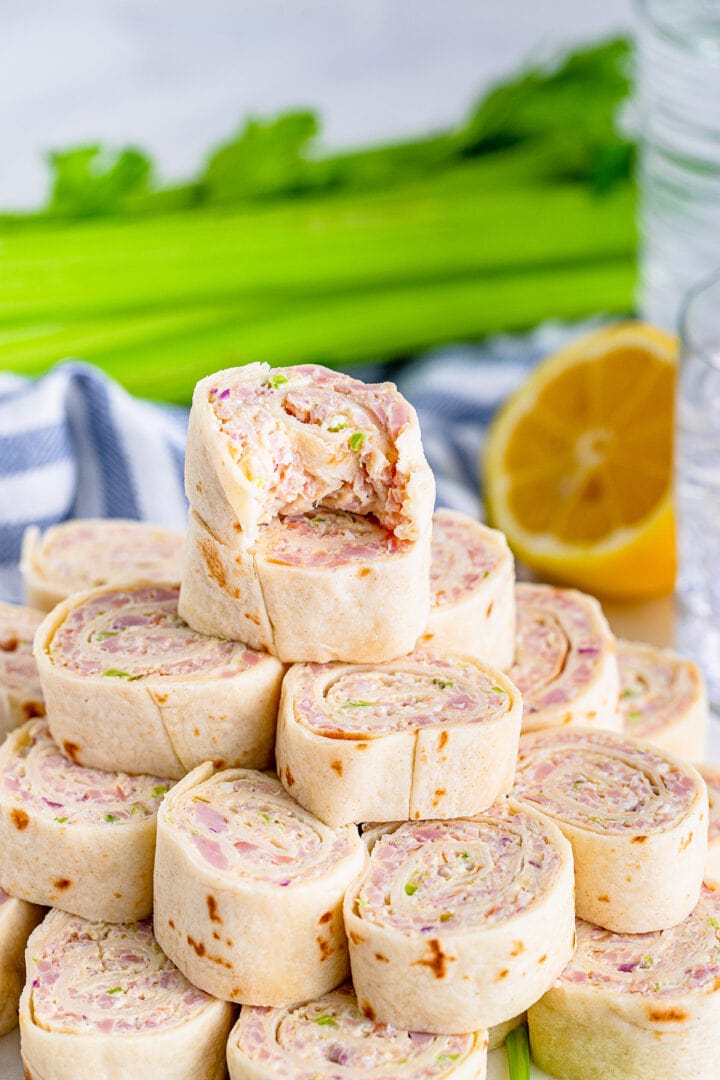 Whether served as ham salad pinwheels or ham salad wraps, you’ll fall in love with this easy ham salad recipe wrapped up in a soft tortilla. These pinwheel sandwiches are easy to make and full of flavor.

They’re the perfect thing for lunches or parties because they double as both a main dish or an appetizer. Give this easy ham salad recipe try, and I know you’ll fall in love with it. It’s so easy, so good, and so versatile, there’s really no reason not to make it! 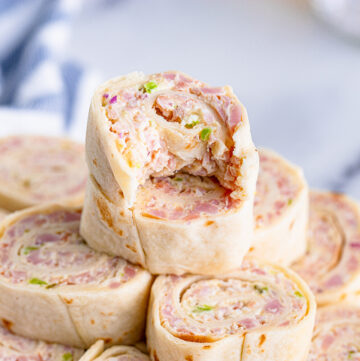 Keyword ham salad, leftover ham salad
Tried this recipe?Let us know how it was! 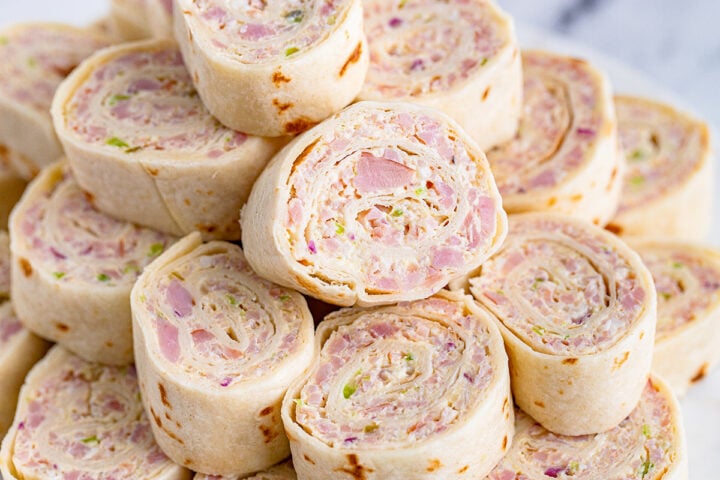