Air fryer s'mores have all the classic flavor we love about traditional s'mores with an air fried twist. These air fryer smores are ooey, gooey, and so delicious. They're also super easy to make. It's a winner all the way around! In no time at all, you'll be enjoying gooey s'mores without having to even light a fire! 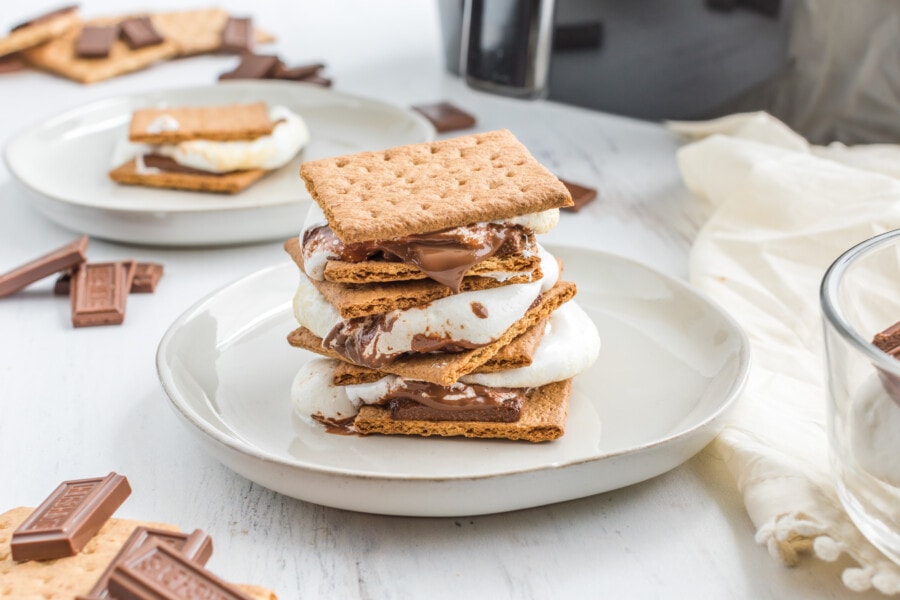 I love s'mores. It's a sweet treat that I've loved my whole life. The melted chocolate, the gooey of the marshmallow, the crunch of the graham cracker. Literal perfection. I can't say no to a s'more, ever. And in all seriousness, why would you?

The best part about s'mores is that it's just easy to eat. I grew up eating ooey-gooey smores around the campfire, listening to stories from family and friends. I still have fond memories when I think about that time.

Those nights sitting around the campfire is what started my early love of s'mores. And it's something that I have to this very day.

As I've gotten a bit older, I've just altered how I make them so it's a tad less straining on me.

My mind recently realized that the air fryer was literally the PERFECT way to cook up s'mores fast and it's been a game-changer ever since. 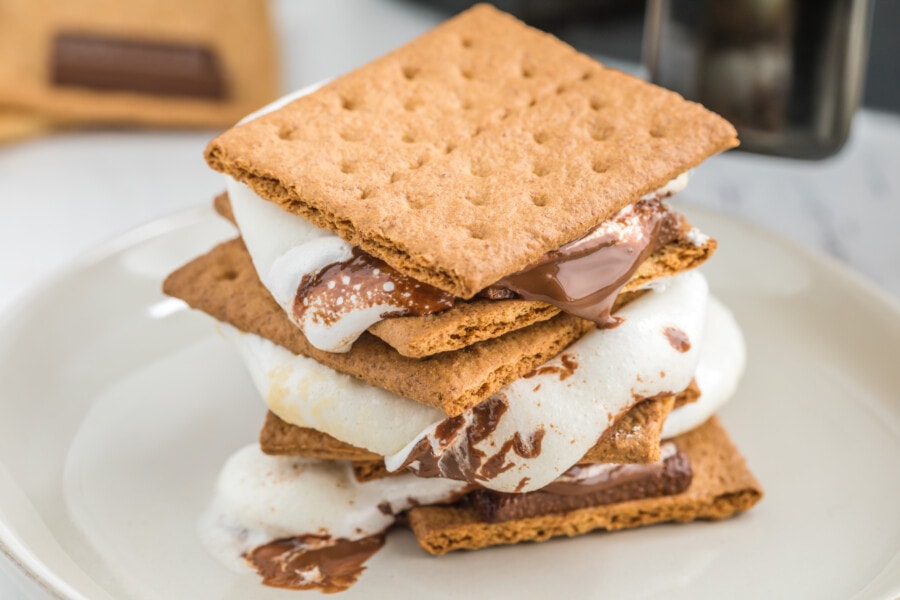 If you've been reading the blog lately, you've probably noticed that I've become interested in the history of the foods that I make. It's just so fascinating!

Did you know that graham crackers were originally invented to curb sex drive? It's true. In the early 19th-century, a new Jersey Presbyterian minister named Sylvester Graham ardently believed that humanity was on its way to oblivion due to its obsession with lust.

He also believed that food played a roll in it, stating that a simple steak dinner could be an aphrodesiac.

To counter this food-induced lust, he created a baked cracker that used finely ground, unbleached wheat flour, wheat bran, and coarsely ground germ which he named after himself. Thus, the graham cracker was born.

Of course, over time people added sugar to make it less... well, awful, and today, we have the graham crackers that we all know and love.

The ancient Greeks and Romans originally used the main ingredient of early marshmallows - a plant called Althaea officinalis - as a medicine. The root and leaves were used to help with inflammation and also as a laxative. I know, it doesn't sound appetizing at all.

It was the French who made the first marshmallow using the plant. They combined the root juice with eggs and sugar and beat it into a foam. The soft paste was then formed into lozenges. They were used as a tasty way to soothe a sore throat.

Eventually, gelatin replaced the root extract because it was a close approximation to the flavor of the plant and much cheaper to use.

Over time, the recipe was refined more and more until modern times where we can now get marshmallows at any grocery store we happen to pop into.

Mallomars - which are nothing more than s'mores in cookie form - were first seen on shelves in 1913. Moonpies arrive a few years later. So lots of food were dancing around the idea of chocolate and marshmallow, but then s'mores came along and took it to an entirely different level.

The first official s'mores recipe appeared in a 1927 Girl Scout guidebook called Tramping and Trailing with the Girl Scouts. While the book was intended to be a guide on how to be a good Girl Scout, it's true legacy is the Some More recipe that it contained.

This recipe, later credited to troop leader, Loretta Scott Crew, called for graham crackers, plain chocolate, and marshmallows. It was the first S'more recipe, then called a Some More.

Over the years - no one is sure when - the name was shortened to simply "S'mores". No one is entirely sure when this happened but there are reports that some Girl Scout publications continued to call the treat a Some More until at least 1971.

Did I mention that the best part about s'mores is that you just need a handful of ingredients to make them? Open up a few packages and you're well on your way to creating the easiest dessert recipe, ever! 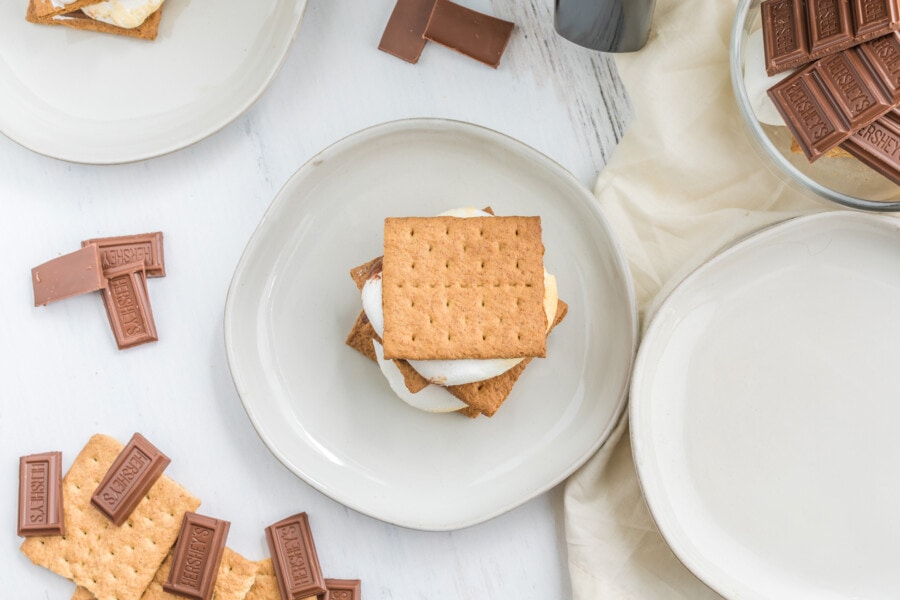 How To Make S'mores in the Air Fryer

Making smores is not only easy, but it's also fun to do! I've been known to make smores with multi-layers because...well, why not?

Start the build the smores

Add to the air fryer

Place 4 at a time, leaving space between each one in the air fryer basket, and cook time is just 90 to 120 seconds.

Be careful removing them from the air fryer as they will be very soft. Allow cooling slightly before serving. 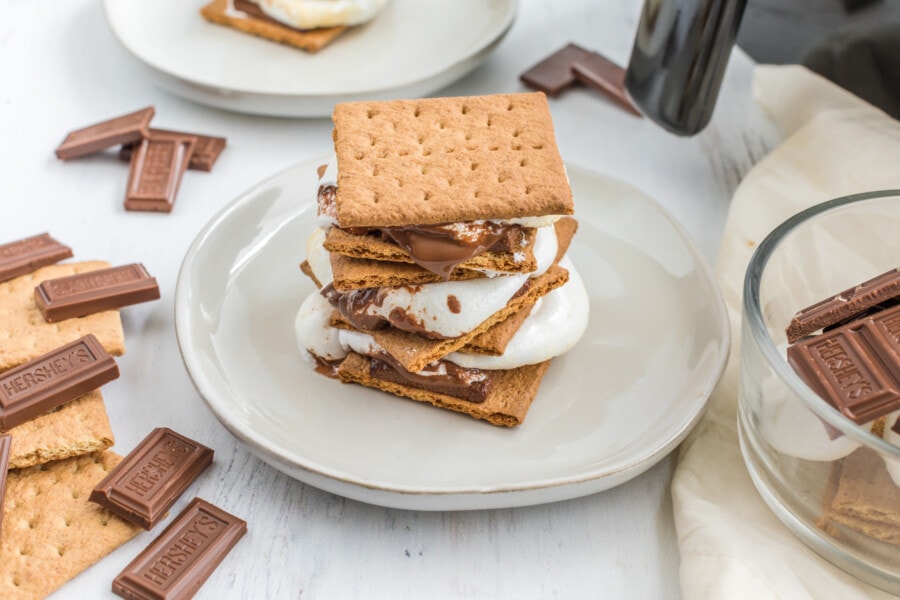 As you can see, this recipe isn't hard at all. But even in knowing that, there are always things that you can do better or change. Here are some simple tips on how to take your s'mores game to the next level.

Change up the flavor

Classic smores are good but have you ever tried to change them up a bit for a different flavor? I have...and it doesn't disappoint. Some ways that you can change up the flavor of your smores are as follows:

I could literally go forever! There are a lot of great ways that you can spruce up your s'mores to make them a bit different here and there.

Can you overcook s'mores?

It's hard to but you actually can. The crackers can easily burn if you're not careful but the biggest ingredient that is going to overcook is going to be the marshmallow fluff or marshmallows.

The more that you cook a marshmallow and overcook it, the harder of a texture it's going to be. This doesn't make it inedible, it just makes it hard and chewy as it cools.

Some people actually prefer their marshmallow or marshmallow fluff a bit burnt and toasted which is totally up to preference and taste.

You'll know after you make the first one. 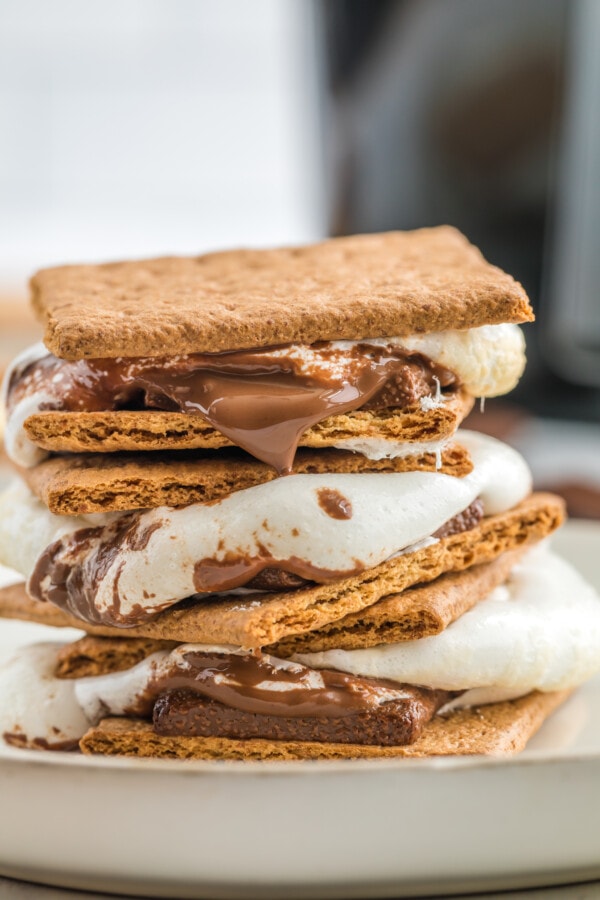 Can you reheat s'mores?

Not really, no. Since this is such a simple recipe, just plan on making it fresh every time. And I really think that you're not going to have any leftovers, either.

If you do, just give it a little bit of time and I'm certain that you'll find yourself making your way back to the plate and snacking away.

What kind of Air Fryer do I need to make these? 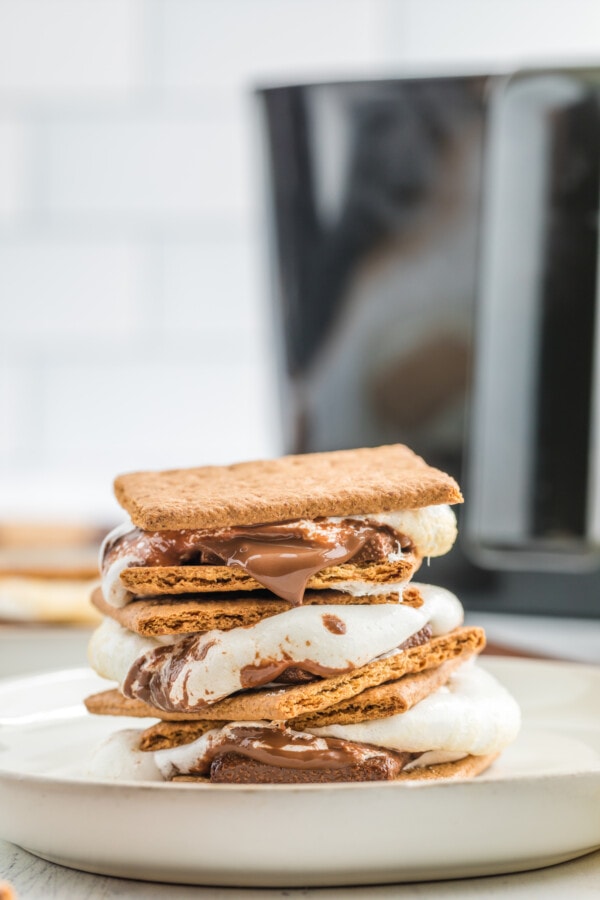 Fun Ideas To Serve Up S'mores

Since you now know how easy it can be to cook up s'mores in the air fryer, this opens up the door to some really cool possibilities!

This air fryer smores recipe is great for a fun weekend or weeknight at home or it's great to share with family and friends, too.

This could be a super fun treat for a sleepover, a birthday party, and even a backup plan to have on the books in case your outdoor campfire s'mores get rained out. 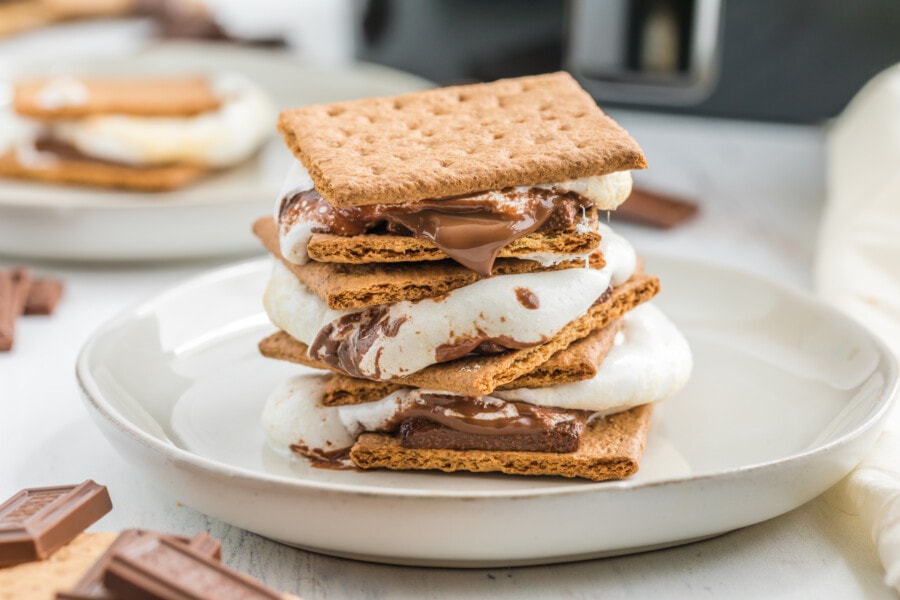 I'm also a big fan of sharing foods and recipes with other people so I had a fun thought of making up a gift basket full of the s'mores ingredients and delivering it to those who might need a sweet treat in their lives.

Since  a lot of people have an air fryer, this would be a super -cute gesture and idea. (and if they don't have one, you could always go above and beyond and give them one as a gift as well!)

Hand-delivering the ingredients to make smores is certain to make anyone feel better and have their day just have an instant positive outlook. 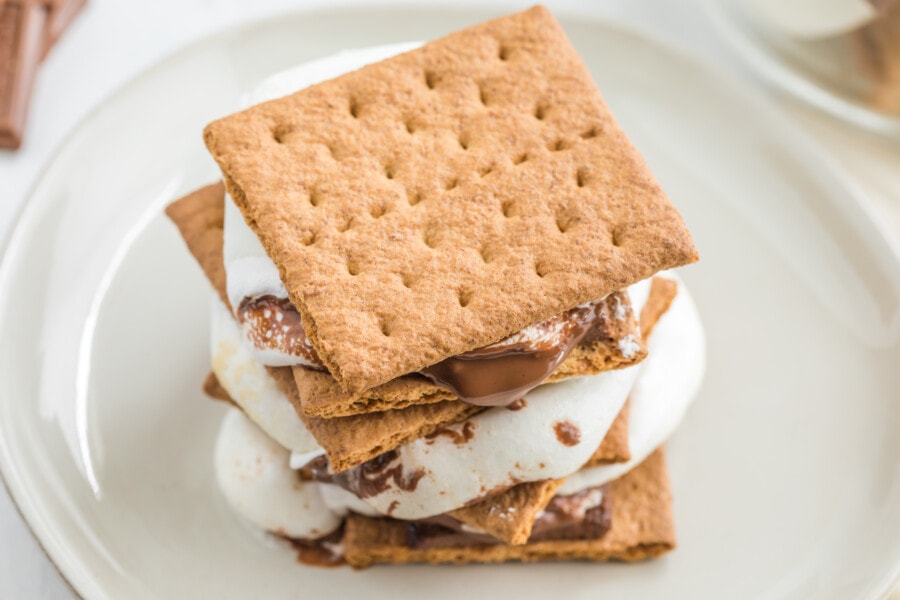 How many chocolate bars do I need for Air Fryer S'mores?

If you want more chocolate, you can break your chocolate bar on half that you have four individual Hershey's bars in each Smore.

What size marshmallows do I need for air fryer s'mores?

I've found that using the marshmallow fluff to make air fryer smores is easiest and works best with the marshmallow. Holds everything in place and tastes great.

I do not recommend using mini marshmallows they do not work well on a s'more.  Want to get really creative with your s'more? Try using the flavored or the new stuffed marshmallows. 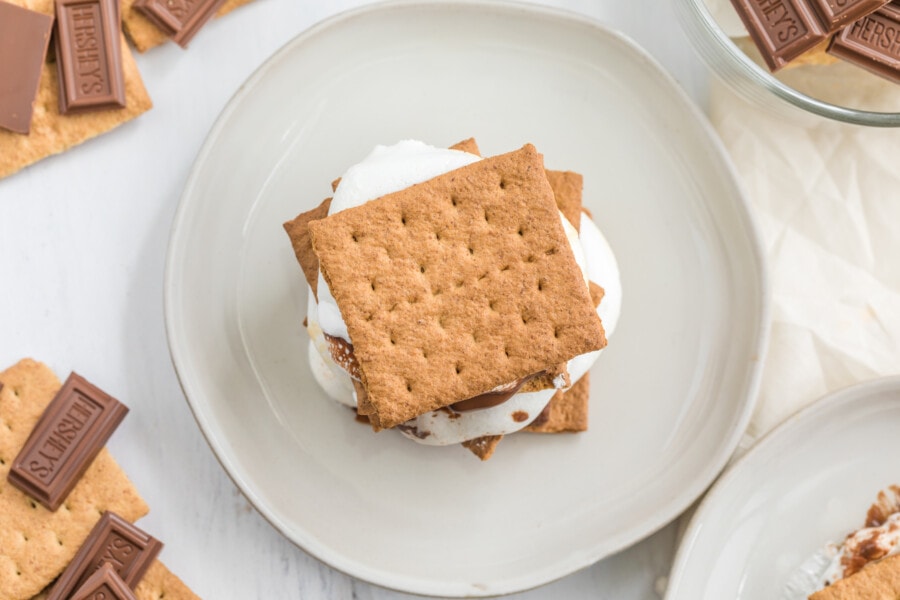 These air fryer s'mores are a great twist on a classic treat. They cook up so wonderfully and so fast, they're the perfect quick treat for any party, sleep-over, and of course, backyard camping night!

Give these air fryer s'mores a try, and I'm sure you and your family will love them as much as we do. 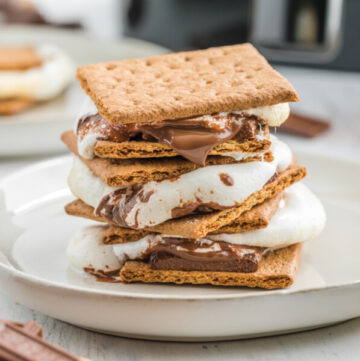 Looking for a super simple way to get a sweet treat? Learn how to make smores in the air fryer. In no time at all, you'll be enjoying gooey smores without having to even light a fire!
Print Recipe Pin Recipe
Prep Time 2 mins
Cook Time 2 mins
Course Dessert
Cuisine American
Servings 4 Smores
Calories 252 kcal

Start to check your Smore's for doneness at 90 seconds as air fryers can cook differently.