Easy Layered S’mores Brownies are a homemade dessert, made from scratch, with marshmallows, chocolate, graham crackers, and more on a rich brownie base. Ooey Gooey Goodness! 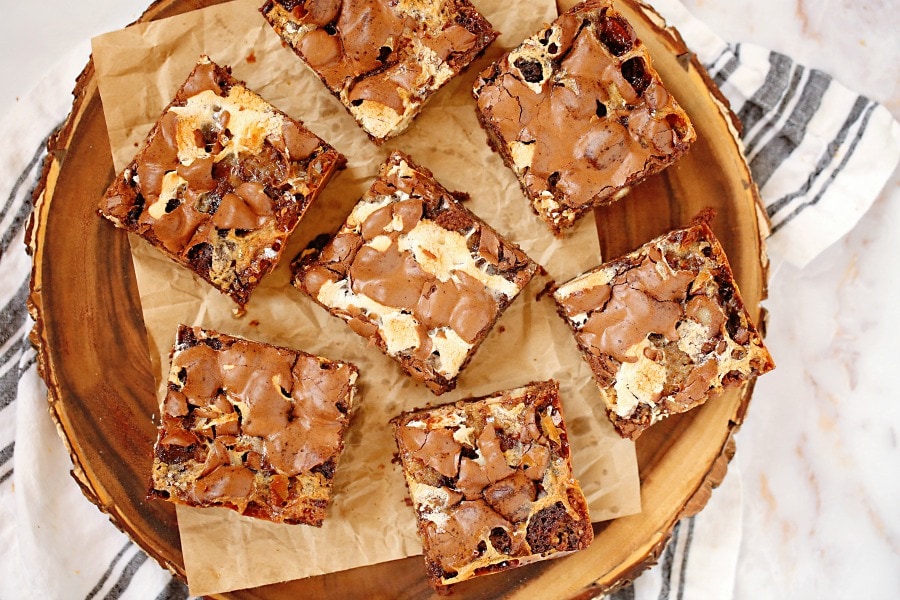 According to wikipedia, originally, a S’more was a campfire treat popular in the United States, Mexico, and Canada, consisting of a toasted marshmallow and a layer of melting chocolate placed between two pieces of a graham cracker or cookie. A graham cracker sandwich of sorts.

More specifically, a marshmallow, usually held by a metal or wooden skewer, is heated over the fire until it is a toasty golden brown color.  Generally, the marshmallows are ooey and gooey inside, but not too burnt on the outside.

At times, the S’mores are wrapped in foil to totally melt the chocolate and the sandwich together. However, the heat from the marshmallow can soften the chocolate as well and so the tinfoil is not necessary.

The word S’more is actually a contraction of the phrase “some more”. One early published recipe for a S’more is found in a book of recipes published by the Campfire Marshmallows company in the 1920s, where it was called a “Graham Cracker Sandwich”.

The text indicates that the treat was already popular with both Boy Scouts and Girl Scouts. In 1927, a recipe for “Some More” was published in Tramping and Trailing with the Girl Scouts.

The contracted term “S’mores” appears in conjunction with the recipe in a 1938 publication aimed at summer camps.

A 1956 recipe used the name “S’Mores”, and listed the ingredients as “a sandwich of two graham crackers, toasted marshmallows and ​a 1⁄2 chocolate bar”. In 1957 a Betty Crocker cookbook contained a similar recipe under the name of “S’mores”.

Although S’mores are traditionally cooked using a campfire, they can also be made at home in an oven, microwave or with a store-bought S’mores-making kit. What’s even better, is that they can be made on top of a brownie! 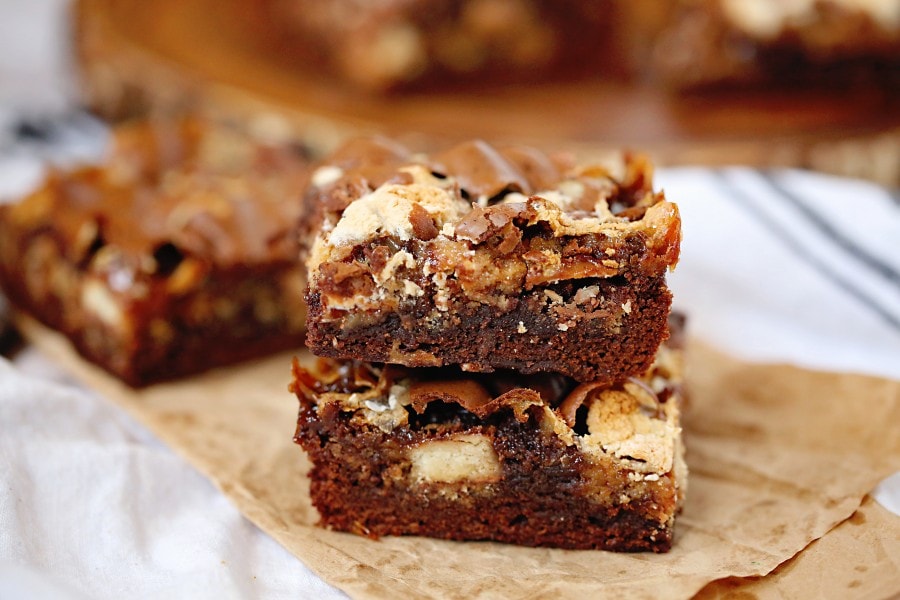 This recipe was originally referred to as ooey, gooey, oh-so-good bars and that’s an understatement.  These easy brownie bars are so rich and decadent, they are almost indescribable.

I can hardly put into words how I feel about them and, being a food blogger, that’s not a good thing.

Normally, these Peanut Butter Brownies do the trick and satisfy all of my sweet kinds of cravings.

Our secret ingredient is the Twix bar that gets all chopped up on top of this AMAZING dessert. You will hesitate to make it too often because the temptation to eat the whole thing is just too great.

I wish I was kidding.

The smell coming from the oven is heavenly and I am embarrassed to admit that I actually start to salivate. Like a kid, I can barely wait and I’m counting down the minutes before I can devour my first one.

You might want to consider adding the S’mores Brownie to your bucket list. It’s that good! I kid you not.

The brownies themselves are rich and wonderful but, when you add the S’mores, it elevates this recipe to a whole new level.

Not only is this dessert definitely drool-worthy, it is super simple and it’s a lot of fun to create. You don’t have to be a kid to really enjoy these S’more Brownies.

Ken adores this dish and likes to make it himself. You really have to watch my husband make these brownies as it is hilarious!

I can definitely see my son in him.

He actually believes that if he is careful enough, he can make it so that each delicious bite has a little bit of everything in it. He’s convinced there’s a kind of science to it and who am I to argue?

At the end of the day, I am just grateful that he prefers to do all of the work himself and has fun doing it. I don’t ever see myself spending that much time placing everything in their strategic locations.

Ken is so careful putting the finished pan into the oven, he is afraid he might knock some of it over and the toppings might just fall out of their place.

As I said, it’s too funny and is a sight to see.

I have to admit it though, these Easy Layered S’mores Brownies tastes decadently delightful. I wish I could express that better, but words just aren’t enough.

You are just going to have to try them for yourself! 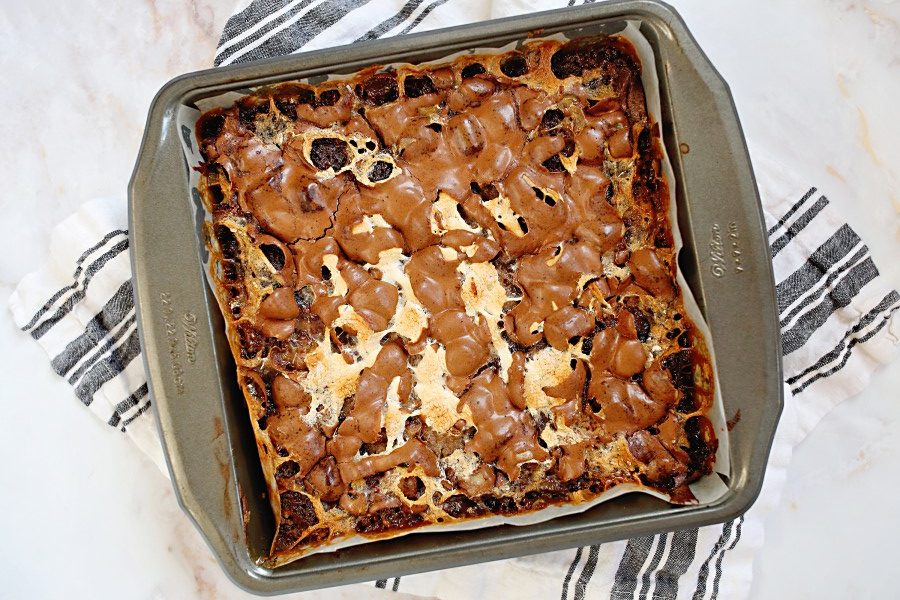 The brownie itself has been described as a cake-like, fudgy cookie and there are different stories of who created it and how it became popularized.

It doesn’t really matter where it came from. The bottom line is that the brownie itself is delicious.

But when you marry the S’mores with the brownies, it makes for a magical dessert indeed!

To save time, you can make the brownies from a box which usually calls for water and eggs.

Did you know that you can also make brownies from a cake mix?

If you’re interested in doing that, use a 8 x 8 square pan (instead of a 9 x 12) to get the right thickness and consistency. Add ⅓ cup of oil and 2 eggs and bake at 350 degrees for 17 minutes until the edges are brown.

Works great, every time. I always figure knowledge is power and I love to give you as many options as I can think of.

You just never know when the information will come in handy.

Taking the time to make these S’more Brownies from scratch is definitely worth the wait. By using your own ingredients, you know exactly what goes inside it.

Baking from scratch can seem a little daunting at first. But it can be easy if you take it one step at a time.

First, make sure you read the recipe thoroughly first.

Preheat your oven, then bring out all the ingredients, measuring cups, bowls, spoons and baking equipment. Measure everything out before combining them.

Next, let the baking begin.

It took a while to perfect the brownie part of this recipe though. I initially thought using 2 eggs would make the brownies more fudgy but, it turns out, I was wrong. Using 3 eggs is ideal.

Whatever chocolate bar you choose, keep in mind the desired texture you want. Depending on the kind, chocolate bars melt differently.

If you’re really big on crunch, add a handful of crushed potato chips or pretzels into the mixture.

If you love peanut butter, then Reese’s Peanut Butter Cups are just the ticket.

Crunch is the name of the game for me. I always pick a chocolate bar with crunch.

I know you get the idea. 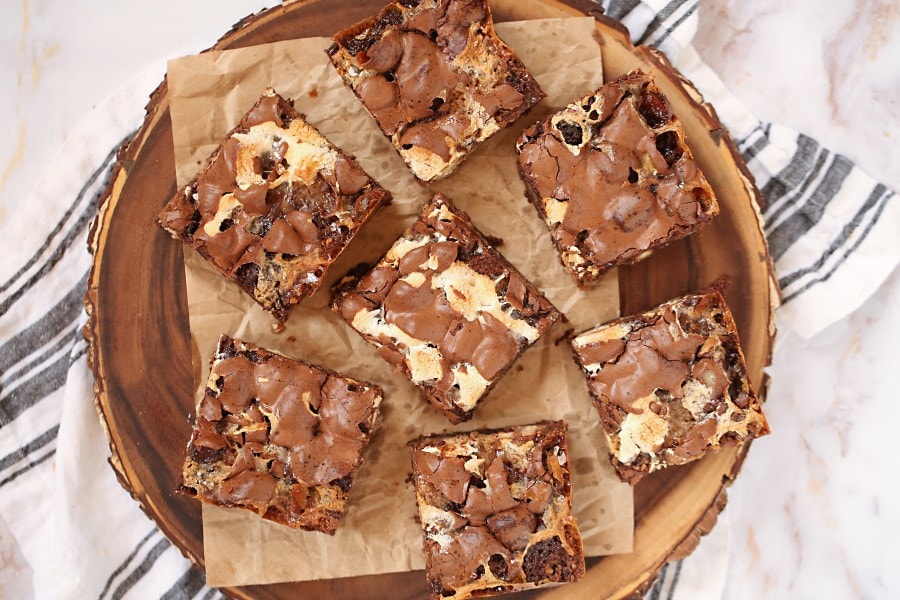 My neighbor, Renate has had two hip operations and is homebound most of the time. We got to chatting about desserts and the topic of chocolate came up.

She admits she’s a chocoholic and when I told her I was making homemade S’mores brownies using chocolate bars, her eyes lit up. So, I made two.

Needless to say she thought it was dynamite. What’s not to love?

When Patrick was growing up, I would ask him what he would like for dessert and, for 2 years, all he asked for is this S’mores Brownies recipe. It got to the point where I stopped asking him and I would just make it.

He is now grown up and, to this day, still talks about it. When he knows Ken and I are about to make these homemade S’mores brownies, he somehow just shows up at the right time. You gotta laugh at that. 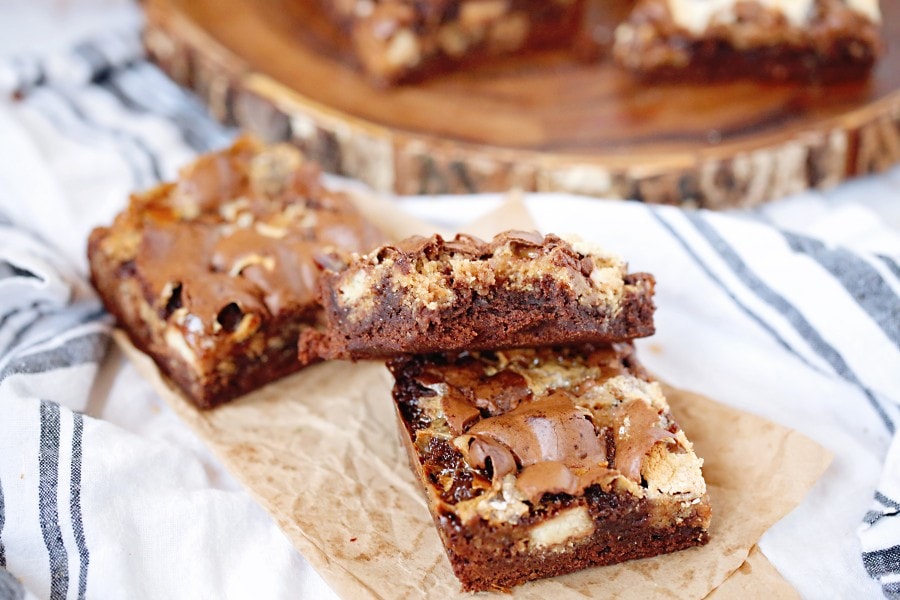 In a medium mixing bowl, beat together butter, sugar, and eggs until fluffy, then beat in cocoa powder, flour, baking powder, and salt until fully incorporated.

Mix graham cracker crumbs and melted butter and then sprinkle a generous layer on top of your brownie batter.

Top with a layer of chopped Twix bars (or a chocolate bar of your choice) and chocolate chips.

Add a layer of marshmallows.

On top of that, pipe out your remaining brownie batter in messy drizzles, then lightly spread it out, just a bit, where you have drizzled. Add a few more marshmallows.

Bake at 350 degrees for 30 minutes or until a toothpick comes out clean and marshmallows are nicely browned.

Cut, serve and enjoy every moment. 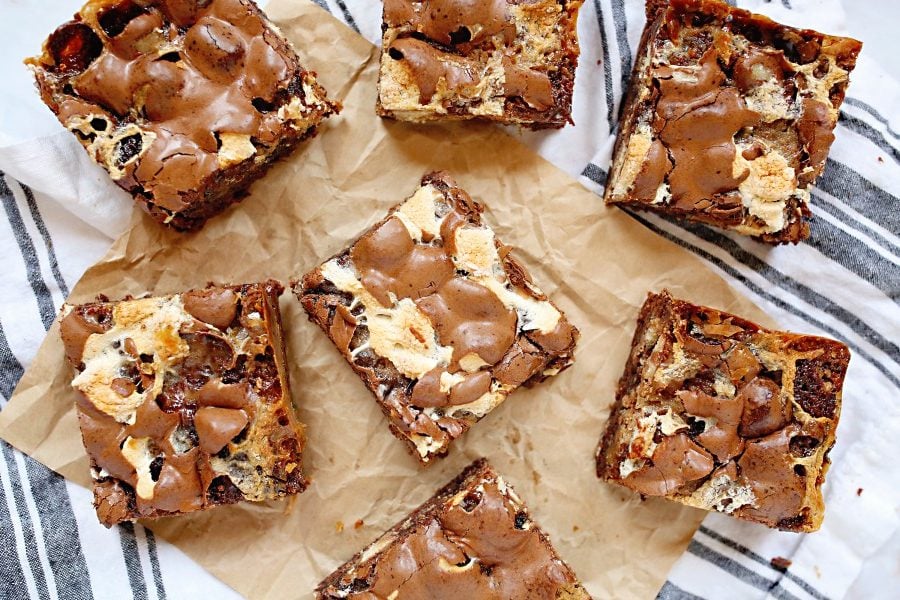 Options for these S’mores Brownies

Different kinds of nuts you can chop up:

Yep. S’mores are frequently cooked over a campfire, with family and friends, but in this recipe you don’t have to leave your kitchen as the marshmallows toast beautifully in your oven.

This S’mores dessert can be enjoyed any time of year, indoors or outdoors.

Marshmallows themselves are sweet, soft pillows of melt-in your mouth goodness.

Graham crackers are sweet and typically made with graham flour and sweetened with honey. You can make them yourself but store-bought is just as good.

Then there’s the chocolate! Need I say more about that?

When Patrick was young, we invited a couple of his friends to a cottage we rented one long weekend. We made a campfire and decided to to make S’mores.

The kids had fun melting the marshmallows on their sticks and, after they devoured this S’mores dessert, we laughed at their chocolate-covered faces and

the fact they were giggling over their sticky fingers that they were trying to pull apart. It was priceless to watch and I later regretted not catching the moment on camera.

That happens way too often in life. 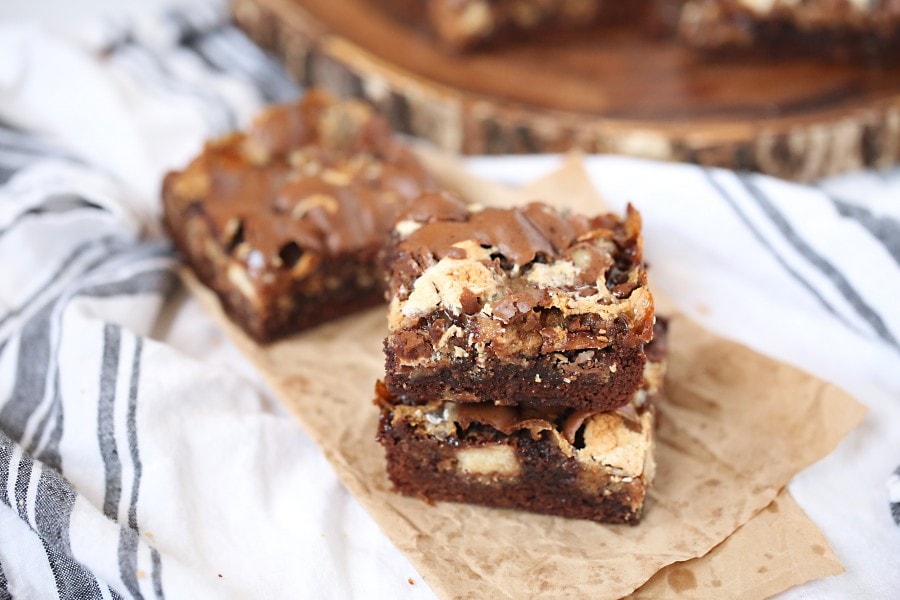 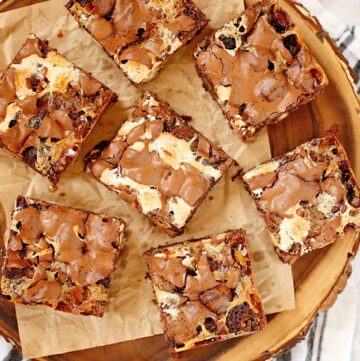 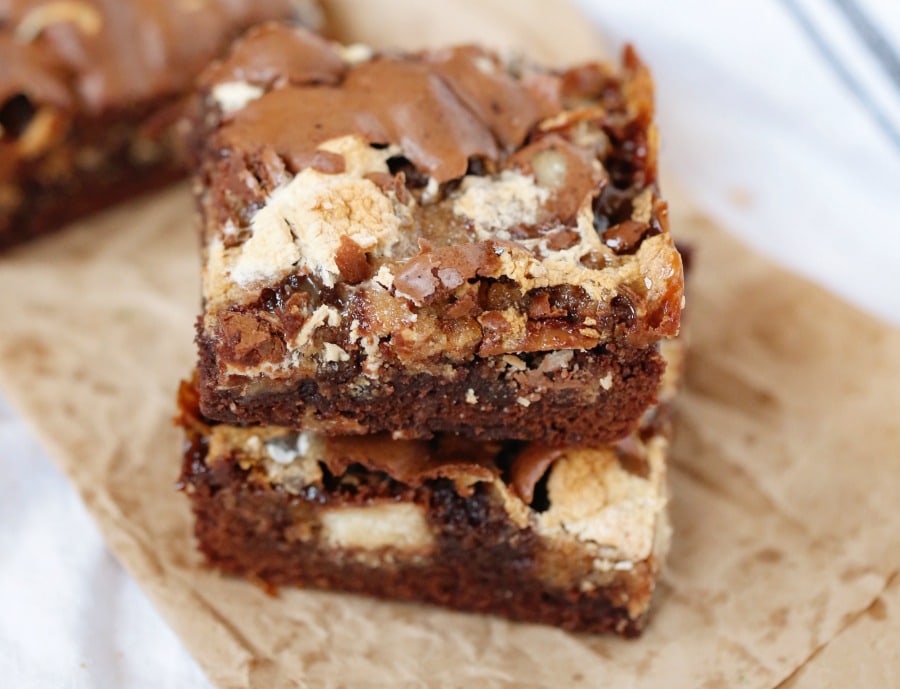