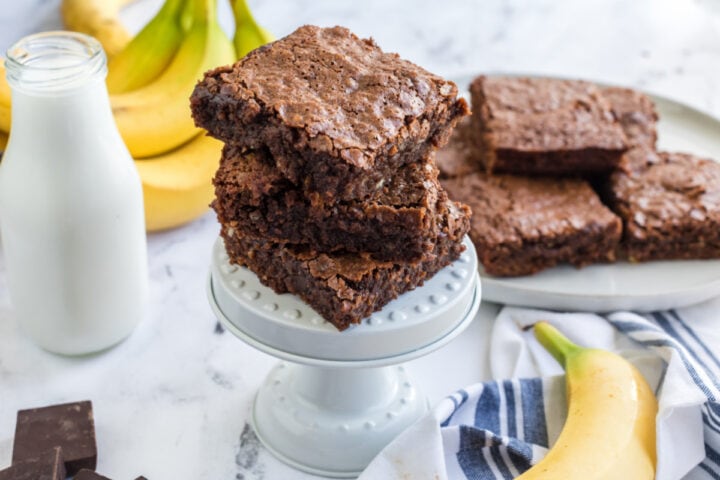 I have a friend that lives in Georgia. We were talking on the phone recently and she was telling me how banana pudding is such a big deal in the south. She said there are competitions, and her family members take it seriously. After our conversation, I walked away from the phone craving banana pudding.

When I opened up the cupboard to see if I had the ingredients I needed to make these banana pudding, I saw my can of cocoa powder and I just knew that I had to try to whip a batch of banana pudding brownies.

This recipe was handed down in my family for generations, and it’s always been a favorite of mine. I do admit that I’ve tweaked it a few times over the years, because I wanted them to be perfect. After the tweaks I ended up with a delicious chocolate and banana flavored chewy brownie that you are bound to be craving. 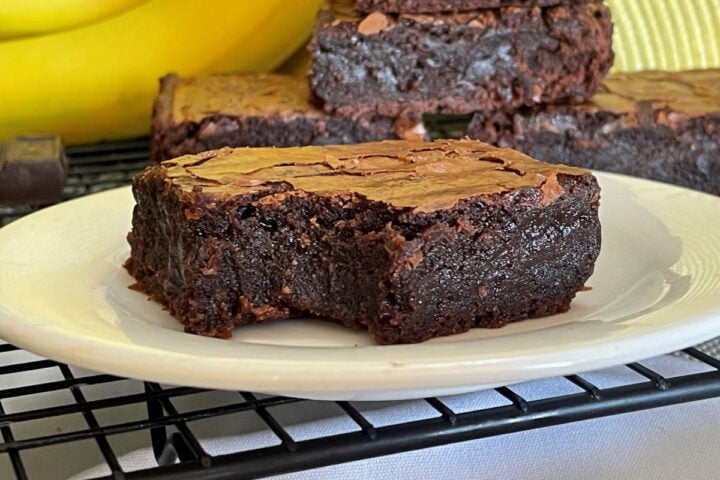 What are banana pudding brownies

These banana pudding brownies are chewy, fudgy and filled with the flavors of banana pie. Banana pudding is a southern indulgence that consists of vanilla wafers or ladyfingers soaked in sweetened condensed milk alongside a custard base made with eggs, sugar and flavoring.

For this brownie recipe, I mixed together a traditional easy homemade brownie recipe with boxed Cook and Serve pudding. Mixing these two rich flavors gave us a rich and chewy brownie that is filled with both banana pudding and chocolate flavors.

Why do I need a foil sling for these brownies

I always include a foil sling when I make my brownies in a square baking pan, because it makes removing the cooked brownies from the baking pan so easy. The trick to easily remove them is to put some aluminum foil under the edges of the brownies before you add them to the baking pan.

I don’t recommend using butter knives to cut your brownies, because they often have little chunks taken out of their blades. Always use a sharp knife, or even a pizza cutter to slice your brownies.

You need a 13×9 baking pan for this recipe. You could also use a brownie pan if you like a lot of edges to your brownies.

How long can I store brownies

Store your brownies in an airtight plastic container. If any of the top brownies become exposed to the air they can get dry and hard, so don’t let them touch each other when you are storing these babies. Brownies can be stored on the counter for up to 5 days.

If you plan on storing them for longer than 5 days, then freeze them and thaw them when ready to eat. You can tell that they are stale if the edges crack or break off when you try to remove them.

Can you freeze brownies

Yes! I recommend freezing your banana pudding brownies in an airtight plastic container. If you freeze them, let them thaw overnight on the counter before eating. 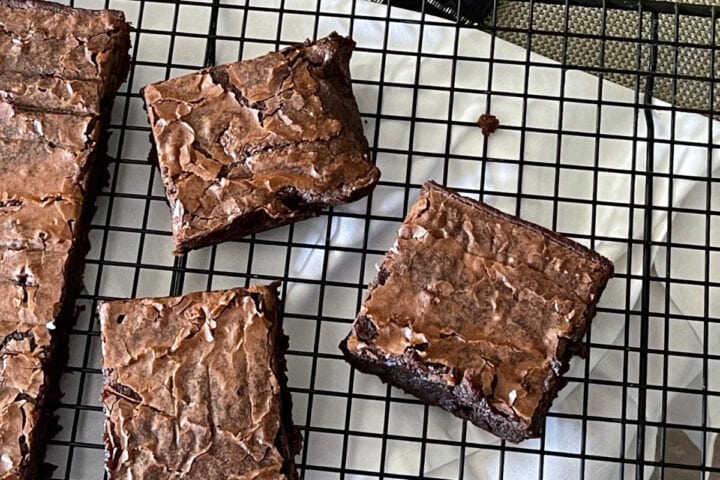 Can I store my brownies in the refrigerator

No you can’t store banana pudding brownies in the refrigerator. Your best bet is to freeze them, and then let them thaw overnight on your counter before eating them.

How soon can I make these brownies

These easy homemade brownies can be made up to 3 days before you want to serve them. You are welcome to store them as long as you’d like, but be aware that they may get stale more quickly than other brownies.

Why do I need to use pudding for these

This homemade brownies recipe that uses pudding as a base allows for the fudgy, chewy texture of this decadent brownie. The pudding also brings the banana pudding flavor to these rich brownies.

What is the difference between Cook & Serve pudding and instant pudding

Cook & Serve pudding is gluten free, while instant pudding has wheat flour in it. Both are made with milk and sugar, but Cook & Serve comes in a box that you need to dissolve the ingredients into boiling water before using them to make your desserts 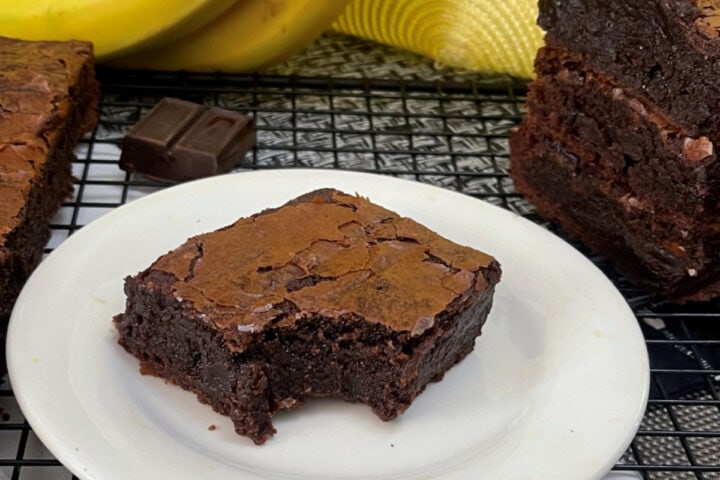 How to make Banana Pudding Brownies

Step 1. For an accurate measurement of boiling water, bring a full kettle to a boil and then measure out the desired amount.

Step 2. Adjust oven rack to lowest position and heat oven to 350 degrees. Make a foil sling for a 13 by 9-inch baking pan by folding 2 long sheets of aluminum foil; the first sheet should be 13 inches wide and the second sheet should be 9 inches wide. Lay sheets of foil in a pan perpendicular to each other, with extra foil hanging over the edges of the pan. Push foil into corners and up sides of pan, smoothing foil flush to pan. Spray foil with vegetable oil spray.

Step 3. Whisk together boiling water, unsweetened chocolate, and cocoa in a large bowl until chocolate is melted. Whisk in sugar, oil, eggs and yolks, melted butter, and vanilla until combined. Gently whisk in banana pudding mix, flour and salt until just incorporated.

Step 4. Transfer batter to prepared pan. Bake until a toothpick inserted in the center comes out with a few moist crumbs attached, 37 to 43 minutes, rotating pan halfway through baking. Transfer pan to wire rack and let cool for 1½ hours.

Step 5. Using foil overhang, lift brownies out of the pan. Return brownies to a wire rack and let cool completely, about 1 hour. Cut into 2-inch squares and serve. 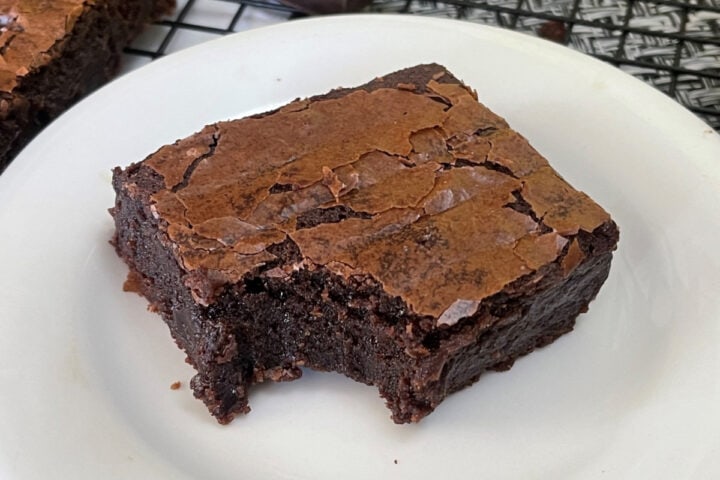 Why I created Banana Pudding Brownies

I don’t know about you, but I’ve had a love of chocolate and bananas together for a long time. Do you remember when the chocolate dipped frozen bananas became popular? It was love at first bite for me. As soon as I tasted one of these delicious morsels I just knew that I had to explore other ways of mixing together chocolate and banana flavors.

Thus, this banana pudding brownies recipe was born. I hope that your family enjoys these delicious and fudgy morsels as much as my family does. If they are like my family they will be asking you to make this easy homemade brownies recipe over and over again.

If you want to wow your friends, bring a tray of these brownies to your next potluck or cookout. Nothing says summer cookout like banana pudding flavors. As always, I wish you all the best in your quest to become a better baker. If you enjoyed this recipe be sure to leave me a comment below and let me know your thoughts. 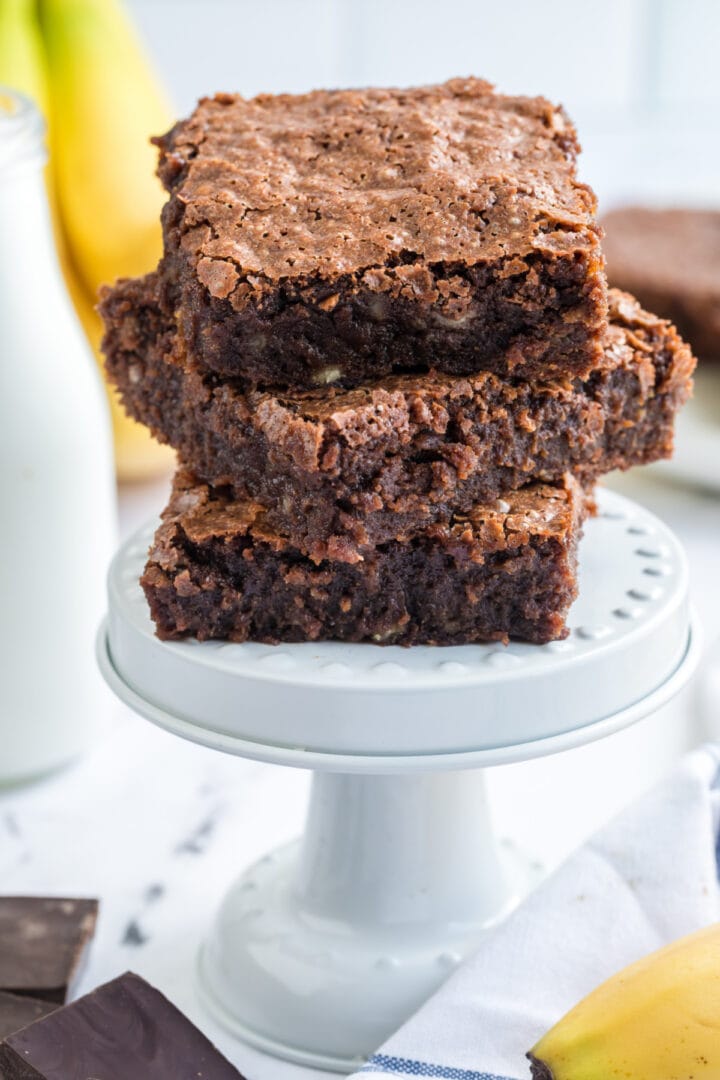 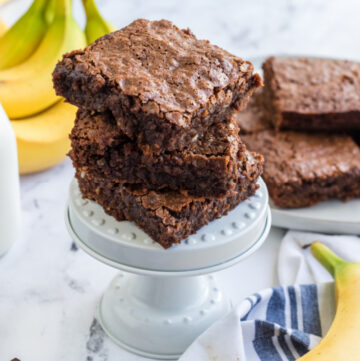 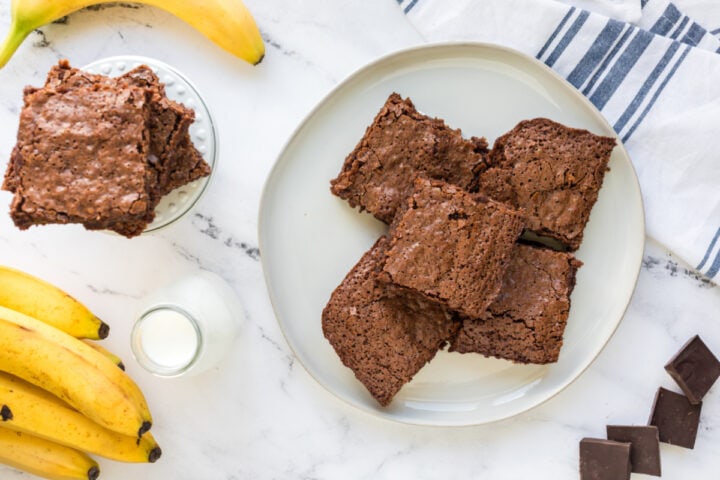