How to Make Pumpkin Pie from Scratch shows the best homemade, easy, canned pumpkin pie recipe with evaporated milk and praline pecans EVER!

A definite favorite around here, especially during the holidays!

Pumpkin pie is delicious on its own but with praline pecan topping, it raises the bar to a whole new level! Add whipped cream and maple syrup and you have one extraordinary dessert!

Now that’s something to celebrate, holidays or not.

Grandma was a fabulous cook and her dinners were always delicious. Where she really exceled was in the desserts department and her praline pumpkin pie was beyond decadent!

After one of grandma’s wonderful meals, the anticipation of her praline pumpkin pie was almost too much to bear as we were giddy with excitement!

There’s no doubt, this would have been grandma’s claim to fame.

Grandma had so many recipes up her sleeve and knew most of them off the top of her head. She also made another pumpkin pecan pie similar to her praline version and that was one recipe I regret not writing down.

I watched and helped her make these pumpkin pecan pies on many occasions.

Although, I don’t have it down to a fine science, I’ve come pretty close. One day I will hit that sweet spot and come up with an exact replica. The topping is almost there.

My husband has all the confidence in the world that I will make that happen and I know I’ll get there in the end!

These pumpkin pecan pie recipes I’m about to share will be far from disappointing. I can promise you that!

To make an easy pumpkin pie, buy a frozen shell and concentrate on making a quality filling. That’s what I do when I’m rushed for time and there’s been many occasions when my family thinks the crust is homemade.

There’s no need to share that it isn’t if they get sheer pleasure out of eating my pumpkin pie. And that’s what really counts?

Certain holidays wouldn’t be the same without pumpkin pie and making it with regular milk is one thing. Pumpkin pie with evaporated milk is quite another.

With evaporated milk, over half of the water has been removed which can result in a much smoother textured pumpkin pie. Smooth, light and fluffy is what we’re going for here. 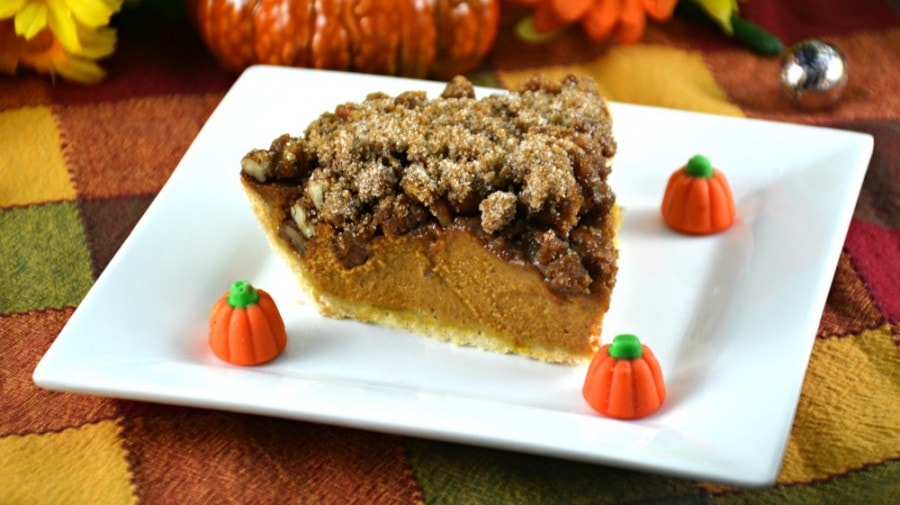 Grandma’s pumpkin pie recipe from scratch brings back so many terrific memories, I can’t begin to tell you. Indulging in her pumpkin pie was like going back in a little food time machine.

One cool fall day while visiting grandma’s house, my sister and I came in after playing in the leaves and were greeted with a hearty meal ending with her pumpkin pie that was simply to die for!

She could see the satisfied smile on our faces.

Once I show you how to make the best pumpkin pie ever, you’ll be reluctant to go back to store bought as the difference is astounding!

Making a superior filling is key and the toppings are like the star on top of a beautifully decorated Christmas tree.

Saves you precious time that can be spent somewhere else.

If plain pumpkin pie is what you’re going for, feel free to skip the praline topping if pecans aren’t at the top of your list. A little sprinkling of cinnamon sugar or topping it with a cloud of whipped cream can turn this pumpkin pie into a dream!

For the pecan lover in you, this pumpkin praline pie is totally dessert worthy! Praline topping adds dimension to an already delicious pumpkin pie.

Use less cinnamon sugar than what this recipe calls for as there’s usually a little left over. My grandma used to say cinnamon sugar brought good luck!

That belief cast a wide net in my family and I repeat that saying to this day and probably always will!

Grandma always found the time to make homemade pie crust. Given those days, that’s not surprising. Even though I’ve done it in the past, I just don’t anymore.

There doesn’t seem to be enough hours in the day to do it, if truth be told.

If I could clone myself, I would definitely make it. But until that happens, store bought pie crust it is!

Does Pumpkin Pie need to be refrigerated?

The preservatives keep them that way.

How long does  pumpkin pie last? Given that it contains eggs and milk, it needs refrigeration and will live happily, if covered, there for up to 4 days.

Cover it with plastic wrap and hold off on the toppings until ready to serve.

How long is pumpkin pie good for?

Again, the coolness of the fridge guarantees 3-4 days but this question can be relative given the temptation factor. Pumpkin pie would be calling Ken and Patrick’s name and I know for certain they couldn’t let it just sit there!

Can you freeze pumpkin pie?

If your pumpkin pie doesn’t get devoured within 4 days, give it a home in the freezer and it will be good for up to 2 months. Again, wrap it in plastic and cover with aluminum foil for added protection.

Make sure you defrost it in the fridge to prevent the crust from becoming soggy.

Delicious Cakes and Pies to Try

If you’re on the hunt for other holiday desserts or simply craving a sweet treat to round out a good meal, check out these delightful morsels!

A big shout out to “our favorite stuffed pumpkin muffins” mentioned in this list as they are beyond delicious and ideal for the holidays too! Each one of these desserts are worthy of your table, special occasion or not! 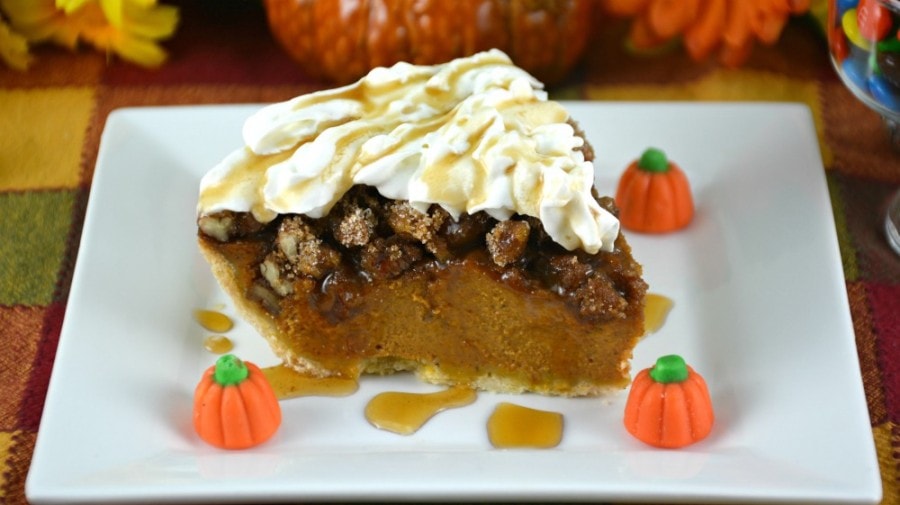 The way this praline pumpkin pie smells when it comes out of the oven is almost indescribable! The aroma is so tantalizing, everyone knows what’s coming and expectations are high.

Waiting is the hard part. If you’ve never made this before, you can’t relate.

If you have, you know exactly what I’m talking about!

There are two options.

Make your favorite homemade pie crust recipe or store bought and bake it.

Buy a frozen 9 inch pie crust, poke a lot of holes in it with a fork and bake it according to package directions.

Time it so the pie crust comes out of the oven and your pumpkin mixture ready to fill it and can go right back into the oven to bake.

Leave oven at 350 degrees to bake your pie.

In a large bowl, using your handheld or stand mixer, combine pumpkin, brown sugar, pumpkin pie spice, and salt.  Scrape down the sides of the bowl as necessary and blend until smooth; about a minute or two.

In a large skillet, over medium to medium high heat, cook pumpkin mixture until it thickens and slightly darkens; around 5 minutes.  Stir constantly. Remove from heat.

Add evaporated milk into pumpkin mixture.  Next add eggs and vanilla and stir until incorporated.

Pour into warm or hot pie crust and bake for 55-60 minutes.  The pie will crack and the filling will look cooked in the center.

While your pie is in the oven, prepare the pecan topping.

In a medium sized bowl combine pecans, sugars, and salt.  Then add corn syrup and vanilla.

Use your fingers to mix the ingredients together.  Yes it’s a bit messy,  but this way works best.

Once blended together, set aside.

In a small bowl combine sugars and cinnamon.  Set aside.

Once pie has a bunch of cracks in it and the center looks almost cooked, spread pecan mixture all over it.  Use all of the pecan mixture.  It should cover the entire surface of the hot pie.

Next, sprinkle cinnamon sugar mixture all over top of the pecans.  It’s not necessary to use it all, but ensure the sugar is distributed as evenly as possible.

Put pie back inside your oven for another 10-12 minutes.  Bake until the pecan mixture is bubbling around the edge of the pie.

Allow pie to cool on a wire rack for at least 2 hours.

Use store bought or make your own.  If homemade, grab a medium sized bowl and handheld mixer.  Add cream and start to beat and slowly add icing or powdered sugar.  Beat until stiff peaks form.

Serve the pie refrigerated or at room temperature, with or without whipped  cream.

My husband gives it an added touch with a little maple syrup. Gives it a bit of decadence. 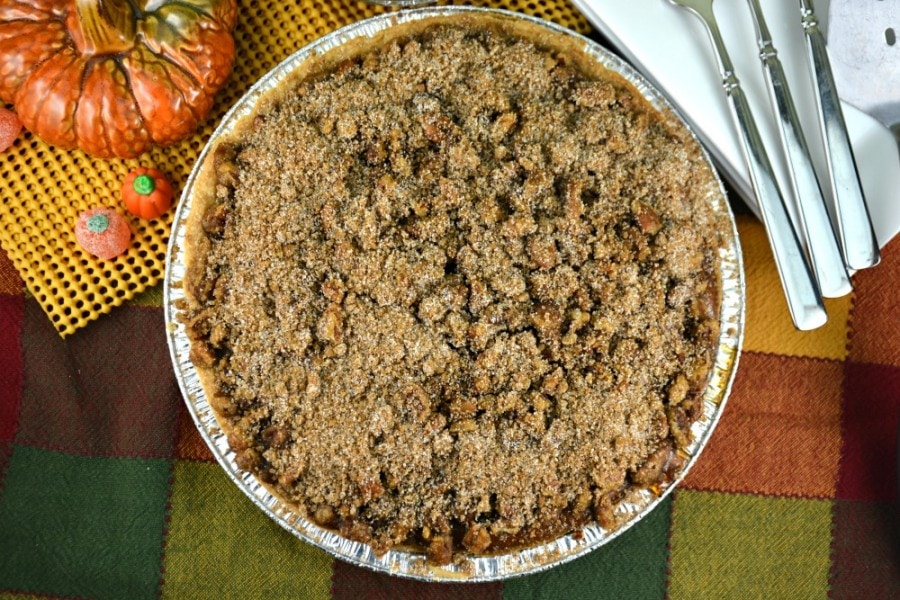 Sometimes a video says it all. Take a peek if you’ve got a minute. I think you’ll be glad you did!

This homemade Pumpkin Praline Pie recipe has the best of everything! It's a creamy spiced pumpkin pie with a sweet, crunchy pecan topping. If you ever can't decide between a pecan pie or pumpkin pie recipe for Thanksgiving, make this praline pumpkin pie for the best of both!
5 from 5 votes
Print Recipe Pin Recipe
Prep Time 20 mins
Cook Time 1 hr
Course Dessert
Cuisine American
Servings 8
Calories 462 kcal 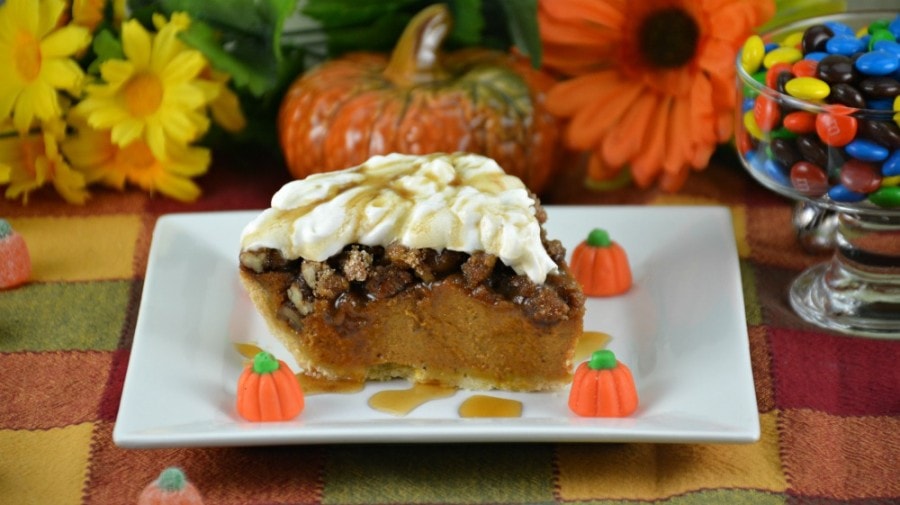