Traditional pumpkin pie is a reminder of the change in seasons and sparks memories of years gone by. If the season is the reason for making pumpkin pie, you may be selling yourself short. This no bake layered pumpkin cheesecake pie can be made any time of year no matter what’s going on outside.

My son will take this no bake pumpkin pie over the traditional one any day! Without a doubt, it’s his favorite and the fact that I don’t need to spend a whole lot of time fussing over it is a bonus!

Imagine my surprise when I learned that my wonderful neighbor and taste tester, Renate, had never experienced the taste of a no bake pumpkin cheesecake pie! Thanksgiving was the only time of year she ate the proverbial standard pumpkin pie.

I made this no bake pumpkin cheesecake pie for her in the dead heat of summer and quite frankly, it couldn’t have been a more perfect time. The conditions were right for this cool, creamy pie and Renate was absolutely delighted with it!  She looked a little embarrassed and struggled to get out the words that she would love a second helping! With recipe in hand and the remainder of the pie, she went home with such a look of contentment on her face, well, it tugged at my heart strings!

Knowing you can make the ultimate no bake pumpkin pie recipe in as little as 10 minutes is comforting to say the least! All it needs is time to chill while you get to focus on the main course with all the other fixings.

This pie can be prepared the day before or earlier the morning of the big day! If freezing, remove from the freezer at least an hour before serving. This no bake pumpkin cheesecake pie will disappear in such a hurry, I strongly suggest making two. That was a lesson I learned from my son who always ended up taking home a few slices.

My mother knew cream cheese had real substance. She always came up with creative ways of using it and this no bake cream cheese pumpkin pie was a shining example.

Now, I lovingly do it for my son. It makes him feel so special and it gives me an abundance of pleasure watching him eat this pie. On more than one occasion, I’ve witnessed Patrick almost devouring the whole thing in one sitting and had to gently remind him that his girlfriend may enjoy a slice.

With a guilty smile, Patrick would put his fork down and ask me to wrap up the rest. He frequently asked for this no bake pumpkin pie recipe as he said it looked dead easy to make. He was right about that.

But for some reason, he never made an attempt but he could always sense when I was making it and would somehow show up on my doorstep. He usually wasn’t alone either and I knew that meant he was boasting about this dynamite no bake pumpkin pie.

I can’t fault him for making that claim.

Sylvester Graham was an American Presbyterian minister who was a big proponent of whole grains and the inventor of Graham flour. This unbleached. whole wheat flour was the inspiration behind the infamous Graham cracker and ultimately the crust for this wonderful pie.

A big thank you to Reverend Graham for that!

Getting back to Patrick, he always had an appetite for this no bake pumpkin pie with graham cracker crust. Who could blame him? Graham cracker crust is such a delightful change from the standard pie crust. and its sweetness and texture is undeniably good! 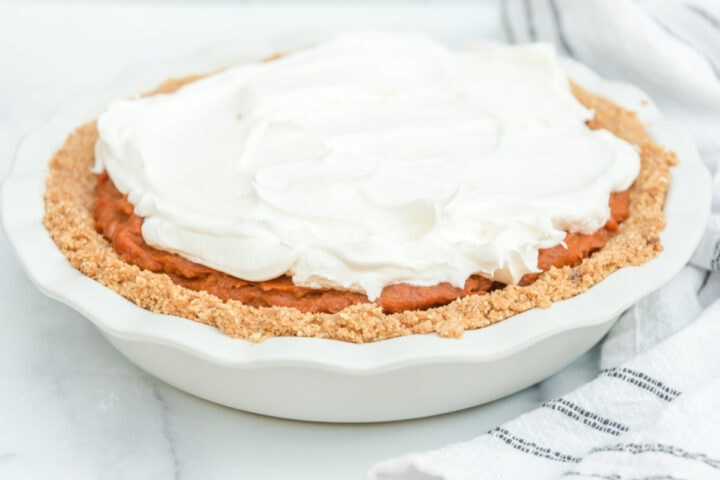 Top the whipped cream or topping with shaved chocolate, coconut or finely chopped pecans or walnuts. Or simply sprinkle with a little cinnamon spice.

How to make No Bake Creamy Pumpkin Pie

In a medium sized bowl, beat cream cheese, sugar and milk until smooth. Gently fold in whipped topping. Spread on top of crust.

In a medium sized bowl, beat milk and pudding powders together until smooth. Add canned pumpkin and spice. Stir until blended. Pour and spread over first layer.

Spread thawed whipped topping over top of pie. Refrigerate or freeze until ready to serve.

The difference between whipped topping or whipping cream

Whipped topping like Cool Whip is a substitute that contains some dairy but is largely made up of oils and syrup. The advantage of using it is that it has less calories than whipped cream and the whipping is already done for you! Personally, this is my preference as per the recipe.

Heavy whipping cream is strictly dairy and if calories and cost don’t matter, then this may be the route to go as the taste between it and whipped topping are different.

Leave whipping cream in the fridge while you chill the bowl and whisk in the freezer for a few minutes.  Place 2 tablespoons of sugar in chilled bowl, then add 1 cup of whipping cream. Whisk until firm peaks form. Whipped cream can be stored in an airtight container for up to 10 hours. When ready to use, give it another whisk for 15 seconds. Fold in as per instructions. 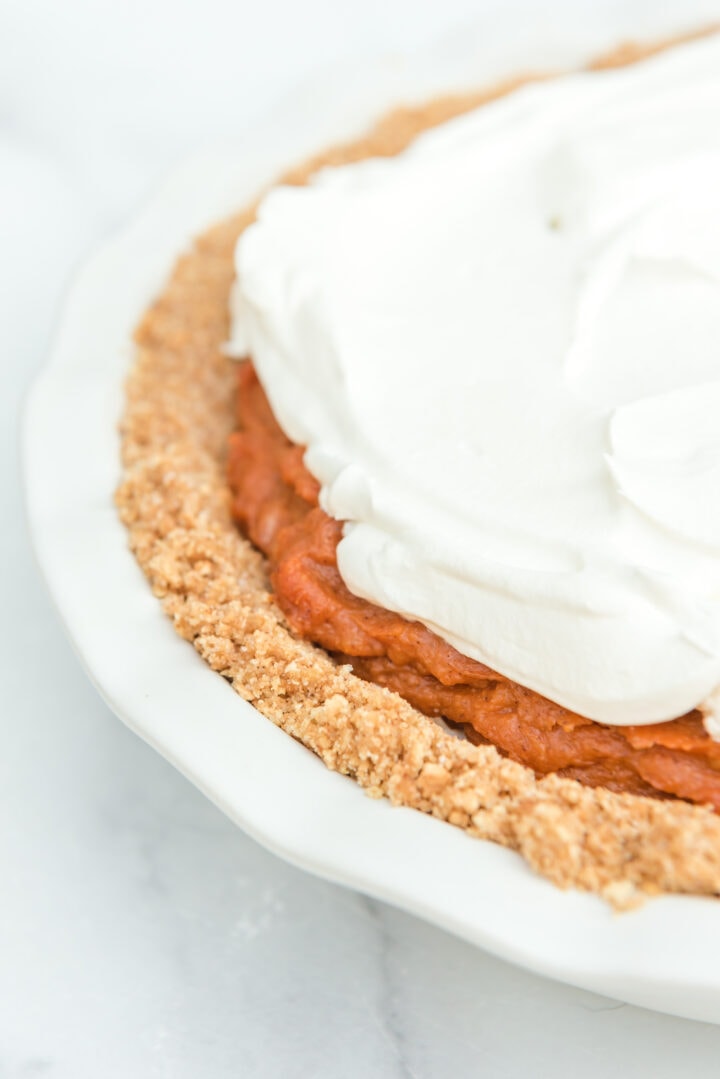 Other Desserts to Try

After Renate got a taste of this no bake pumpkin cheesecake pie, she was hungry for other desserts to try.

So if you’re short on dessert ideas, try adding one of these sweet endings to a meal. It will not disappoint. Whether it’s a special occasion, afternoon tea or coffee with a friend, these desserts are delightful indeed!

If a picture speaks louder than words, then let this recording says it all.

Don’t forget to drop me a line and let me know what journey this no bake creamy pumpkin pie took you on! Be well.

Refrigerator: This recipe will store covered in the fridge for up to 5 days. Freezer: Wrap tightly in several layers of plastic wrap, then wrap well in aluminum foil. Freeze for up to 3 months. Thaw: When ready to serve, thaw in the refrigerator for a few hours.