This healthy tuna salad recipe is easy to make and so good. This chunky vegetable tuna salad is the most delicious veggie tuna salad ever! 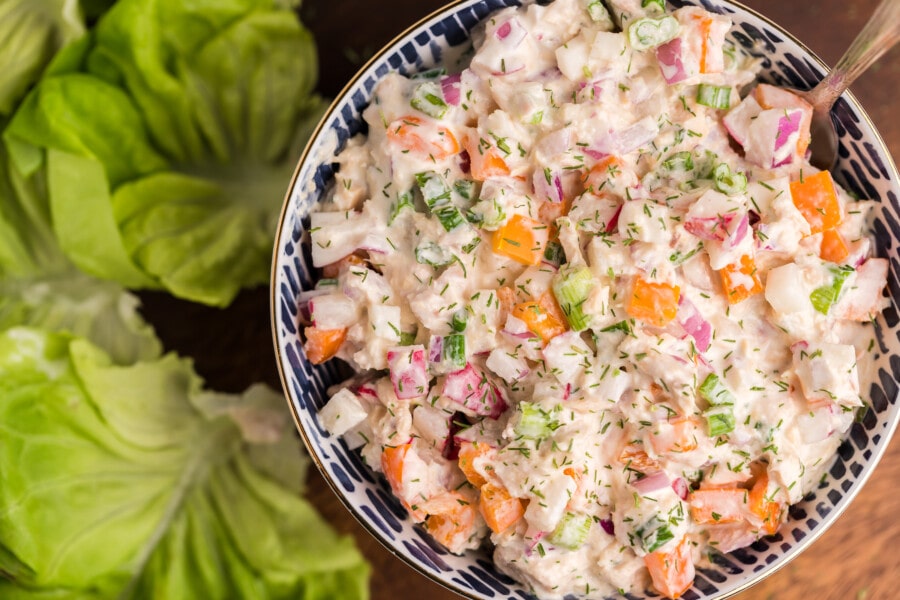 I have LOVED tuna salad all of my life and still eat tuna regularly in sandwiches, wraps, or salads for a quick and super easy healthy lunch or a small meal.

As far as quick and healthy meals go this recipe is up there as a personal favorite. I can eat this creamy, flavorful, bright, crunchy mixture on toast or crackers or in a sandwich, pita, or wrap.

I have mixed a bowl of this healthy tuna salad with a pile of lettuce or mixed greens to make the best salad or surrounded spoonfuls of this tuna salad in lettuce to enjoy the best tuna lettuce wraps.

Anything truly goes and I always enjoy every healthy bite. You will too.

Of course, it’s a huge bonus that this vegetable tuna salad is also super healthy. It’s full of lean protein and crunchy vegetables, so I always feel good about making it. 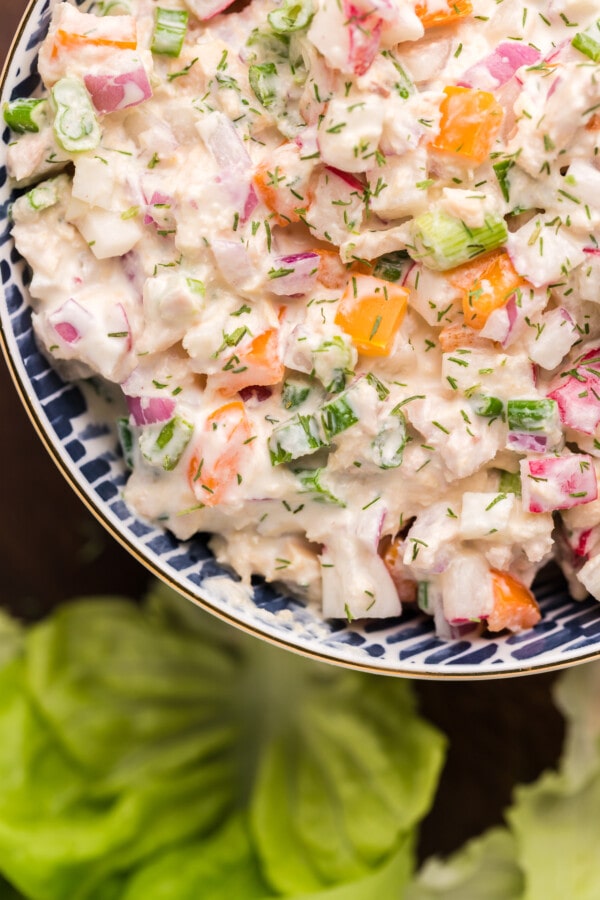 Tuna salad is super healthy. It’s packed with lean protein (3 oz contains 20 grams of it!) Omega 3 fatty acids, selenium, vitamin D, B vitamins, and more but overall how healthy your tuna salad depends on a couple of factors.

First, the ingredients used to make tuna salad. Unfortunately, mayo is most commonly used in tuna salad and it is full of calories and saturated fat.

This recipe uses Greek yogurt with mayo to give you the same texture you’re used to with a lot less calories and fat, especially if you use lower calorie or reduced fat mayo.

I urge you to taste your mayo – greek yogurt mixture and add in as little mayo as you need to make your tuna salad taste as you want it to. As long as your total is ½ cup, that is what’s important.

However, there is concern about mercury levels in tuna, or any fish for that matter, caught in the ocean. As long as you’re not consuming an excessive amount of tuna or ocean caught fish daily you have little to be concerned about.

This healthy tuna salad recipe is made with celery, red onion, sweet bell pepper, radish, green onion, and some fresh dill. I love all of the crunch and I LOVE all of the colors.

This super easy snack or feast comes together with both mayo and greek yogurt with a splash of dijon or yellow mustard that takes this incredible healthy tuna salad recipe from ordinary to extraordinary.

I kid you not. 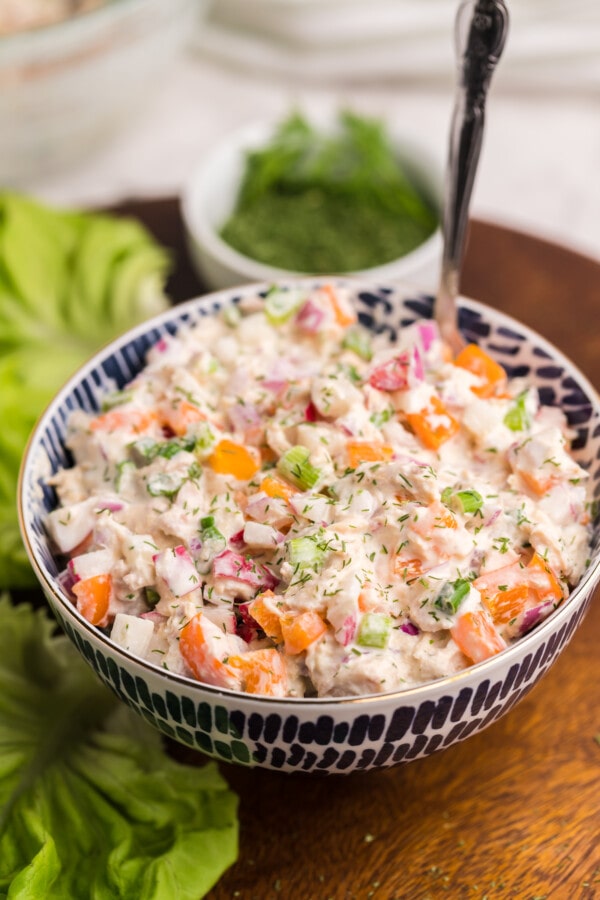 What is the best kind of tuna to buy?

The most common commercially fished tuna species for canned tuna are albacore, skipjack, and yellowfin. Generally, “white” tuna refers to albacore tuna and “light” to skipjack, yellowfin, bigeye, or a combination of any of the three.

Albacore is thought to have a milder flavor than light tuna and is higher in omega 3 fatty acids which help our hearts, brains, and eyes.

The only potential issue is that it can also have higher mercury levels because of all of the small fish they consume throughout their lifetime.

However, eating tuna regularly is generally considered safe and is encouraged.

What is the Difference Between Tuna Packed in Oil or Water?

Tuna packed in water has a milder flavor, is generally the healthier choice of the two because the tuna hangs on to more of its vitamins and minerals, especially omega 3 fatty acids which are so important to us.

The tuna will absorb some oil despite your best efforts to drain it, even if it’s usually an unsaturated oil like soybean. This means your tuna fish will be moister and have a richer texture.

Albacore is the most popular kind of tuna sold in the United States and is labeled “white” as the flesh is lighter in color and as a rule is less flavorful than “light” skipjack, yellowfin tuna, and on occasion, tongol tuna. Light tuna meat is darker and has a more pinky color to it.

Comparisons have been made to chicken breast and chicken thigh meat. Regardless, always check your labels to know which kind of tuna you’ve purchased.

What is the difference between chunk, flaked, and solid tuna?

These terms only describe how the tuna was packaged.

Solid tuna is found in large, firmer pieces usually from the loin, which are best if you’re looking to use tuna for pasta or lettuce and greens based kinds of salads.

If looking for a moist and creamy tuna texture with some chunks for tuna salad among other things grab the cheaper chunk style tuna as its in pieces that vary in size or chunks.

Flaked tuna is all of the tuna pieces that are left after the solid and chunk tuna is canned and is usually the cheapest. 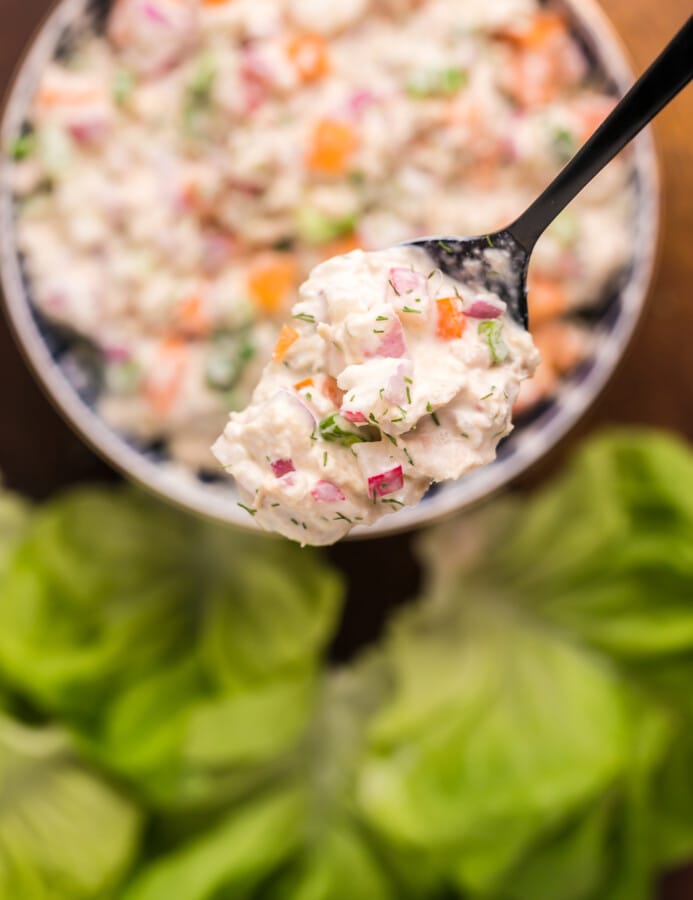 What we all think of today as a simple, easy dish that can be made at any time is the result of times that were far leaner than those we live in today. In fact, tuna salad was born from a need to stretch every last bit of food available to families.

Back in the 19th century, when there were no supermarkets or grocery stores just down the road, Americans did their best to use up every scrap of food they had. And I mean that literally.

Chicken, ham, or fish scraps from evening dinner were mixed with mayonnaise and served on lettuce for the next day’s lunch. Celery, pickle, and olive leftovers that were used to make supper relishes the night before were also mixed into the salad.

Interestingly, these various scrap salads that were the ancestor of today’s tuna salad had no tuna in them. In fact, versions made with fish usually used salmon, white fish, or trout. Most Americans didn’t even know about tuna.

With the advent of canned tuna in the early 20th century, families could skip the cooking of fish and jump right to making their salads. This is where modern tuna salad was born.

Using the old recipes that were designed to use up food scraps combined with this new fish sensation of canned tuna, families all across the country began making our modern day tuna salad. 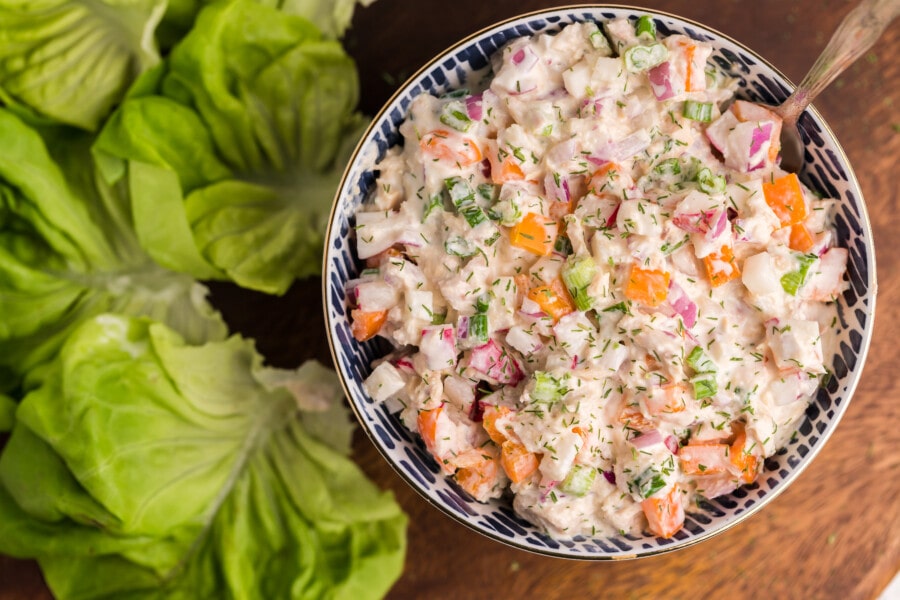 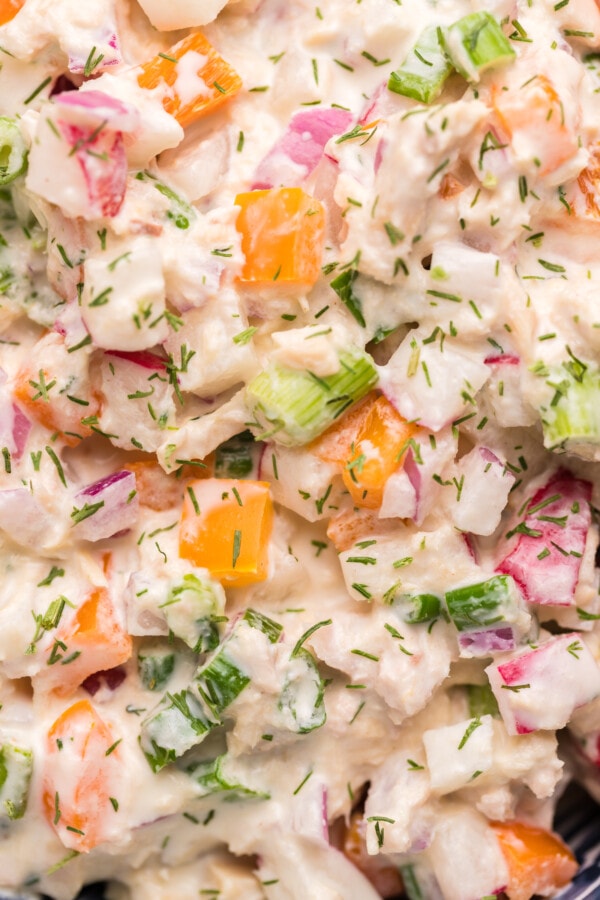 This veggie tuna salad is so easy to make, and it’s such a delicious, healthy meal. The ingredient list is very small, using tuna and a few vegetables, along with a little mayo and Greek yogurt.

You can also use greek yogurt all by itself or adjust the ratio of mayo and greek yogurt until you’re satisfied with the taste.

There are no fancy ingredients or extra special cuts of tuna. It’s just a simple, delicious vegetable tuna salad. That’s it! Here’s what you’ll need.

How to make Healthy Tuna Salad

As you’ll see in the recipe highlights below, this is a super easy recipe to make. It only involves opening a can, dicing, and mixing. That’s all there is to it.

You’ll find the full recipe with amounts at the end of the post but just take a look right below. I took two bullet points to highlight this recipe. Two! 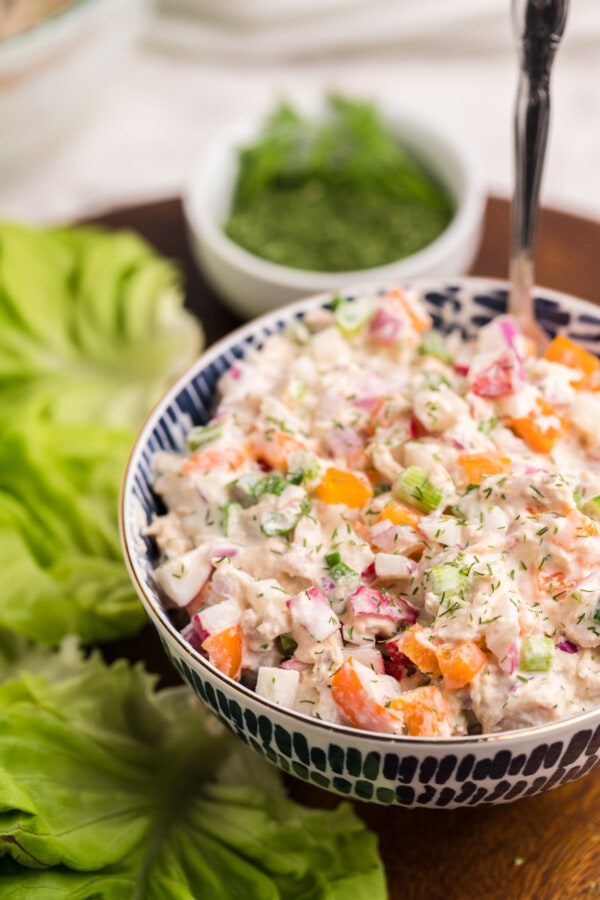 One of the great things about this veggie tuna salad recipe is how versatile it is. All you’re doing is simply mixing tuna with vegetables and a little mayo and Greek yogurt.

Because you’re simply combining a variety of ingredients, this recipe is ripe for mixing things up. You can make alterations to the recipe by varying the seasoning or veggies.

Changing the seasonings in this veggie tuna salad recipe can totally revamp the flavor and feel of it. Here are some of my favorite seasonings to mix things up.

Vegetables and Other Additions

Using various vegetables and other add ins is another great way to change up this veggie tuna salad recipe. It’s so simple to vary these ingredients to create exactly the kind of tuna salad you want. 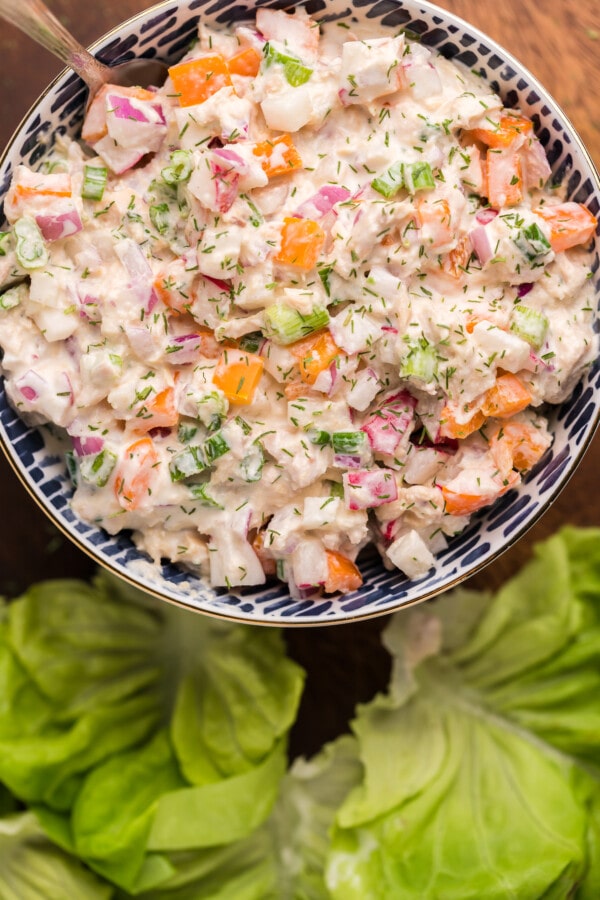 What can I use instead of Mayo?

I suggest a blend of mayo and greek yogurt but may and sour cream works well too.

Feel free to use a fat free sour cream or just use greek yogurt all by itself if you can handle the taste.

I have to add a small amount of mayo too.

Consider adding some mashed ripe avocado to your mayo, yogurt or sour cream mixture and what a mixture it will be! Avocado fans need to check that option out.

Such a creamy and wonderful variation!

How to Store Healthy Tuna Salad

You store this healthy tuna salad recipe in the refrigerator in an air tight container for up to four days. You can’t freeze this one, so make sure you eat it all up before it goes bad. Don’t worry, that’s not likely to happen! 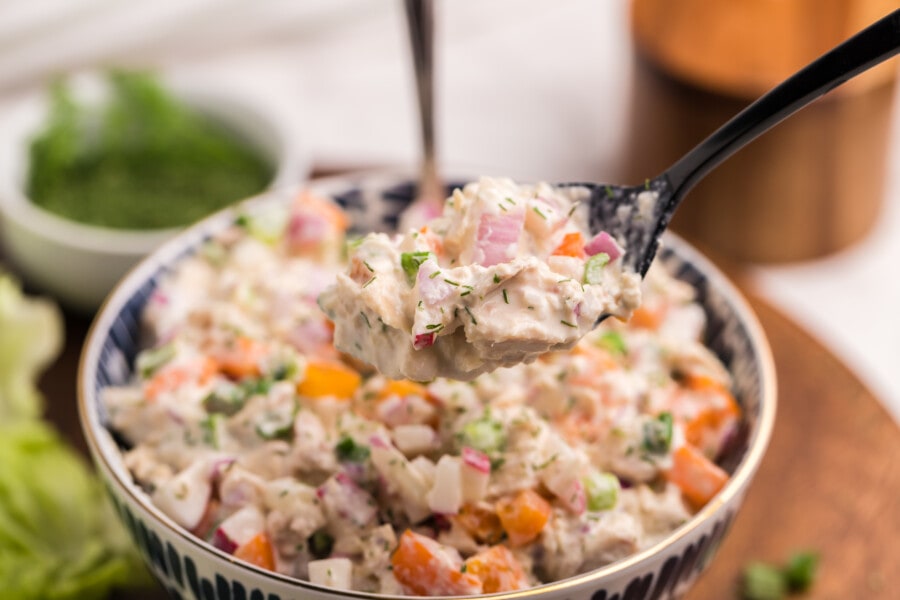 Try This Healthy Tuna Salad Recipe for Yourself

This delicious veggie tuna salad is so easy and so good, you’ll find yourself making it all the time. With a total prep time of just around five minutes, this dish comes together quickly.

It also disappears just as fast! Give it a try today, and I know your family will gobble it all up.

Other Salads to Try for Lunch 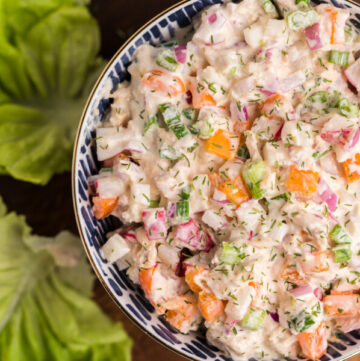 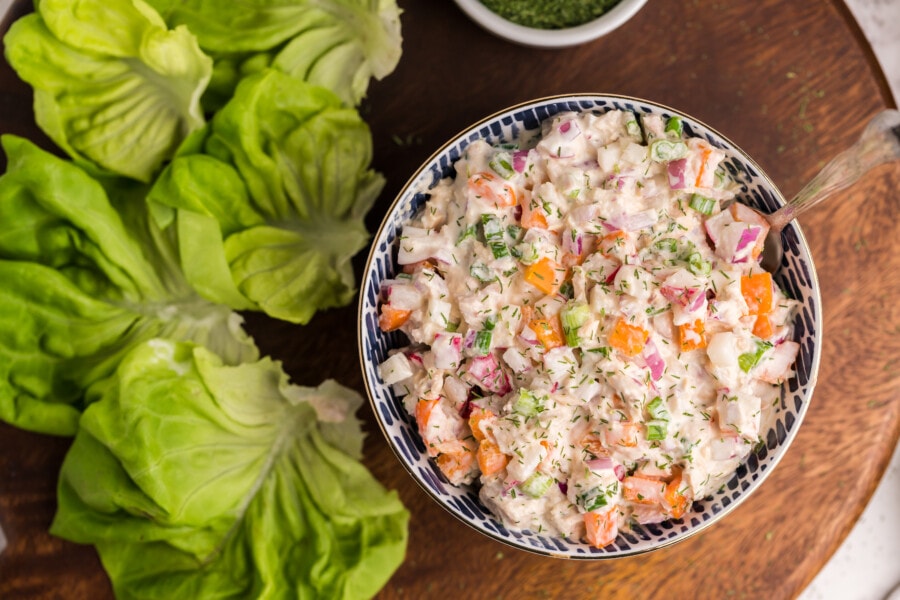