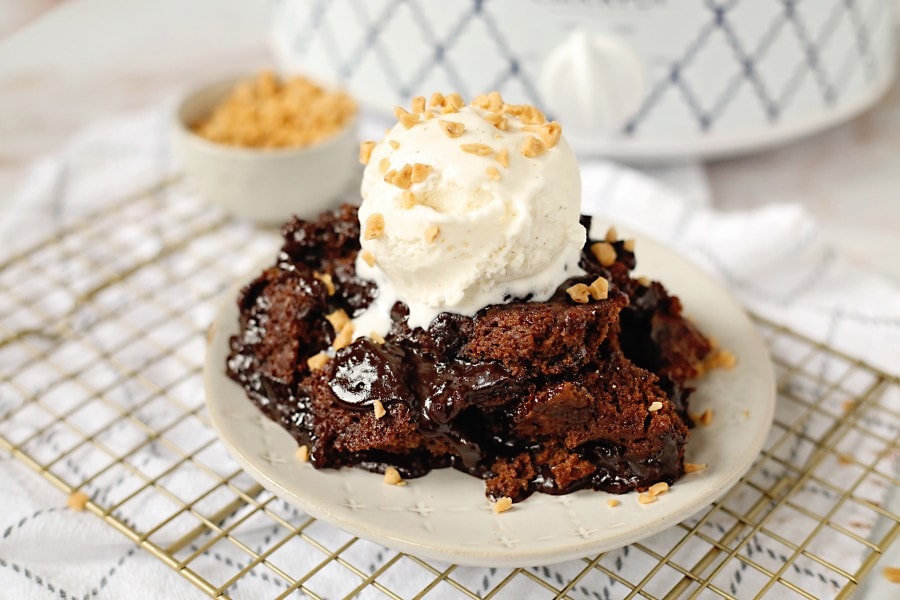 If you’re looking for a great Slow cooker fudge pudding cake, hot fudge sundae cake, chocolate pudding cake recipe or slow cooker chocolate lava cake, then you have come to the right place! I’m going to show you how to cook a cake in a slow cooker. 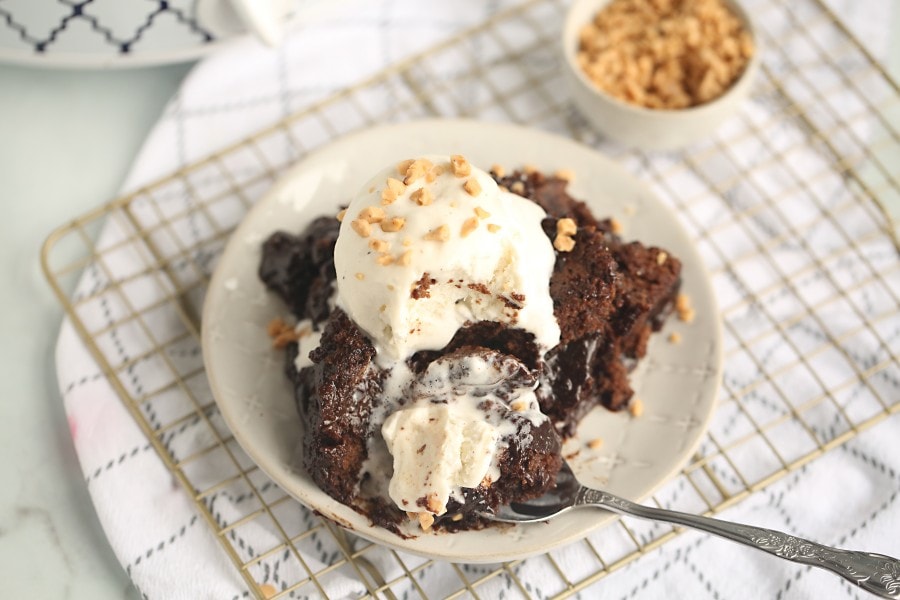 Call it whatever you want, this ooey, gooey wonderful slow cooker chocolate lava cake is perfect for any occasion.

And the best part is it’s the tastiest and the easiest crock pot cake around! 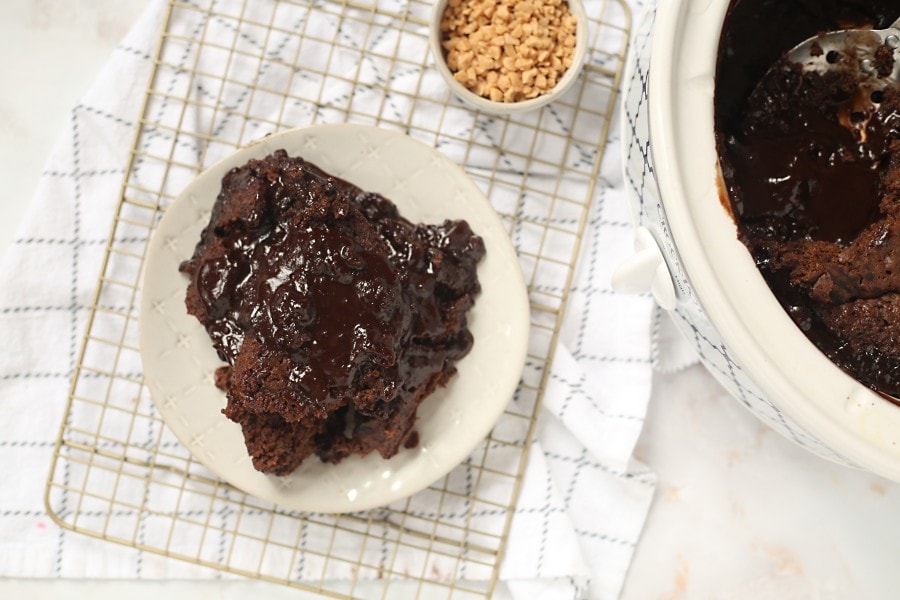 I suppose some people call this a slow cooker dump cake because you throw all of the ingredients into your slow cooker and within two hours you’re scooping out this amazing, moist cake.

Smothering this chocolate slow cooker cake in toppings is the best part.

We have put everything from strawberries, raspberries and ice cream to chocolate, candies and syrups on our crock pot cake. And every time, it’s delicious.

My husband Ken calls adding the toppings “decorating,” and we can be generous with the term here if you’d like!

He also says “less is more.” But I can tell you, with this dessert he is plain wrong!

Simple slow cooker fudge pudding cake is meant to be SMOTHERED in syrups, creams and other candies! 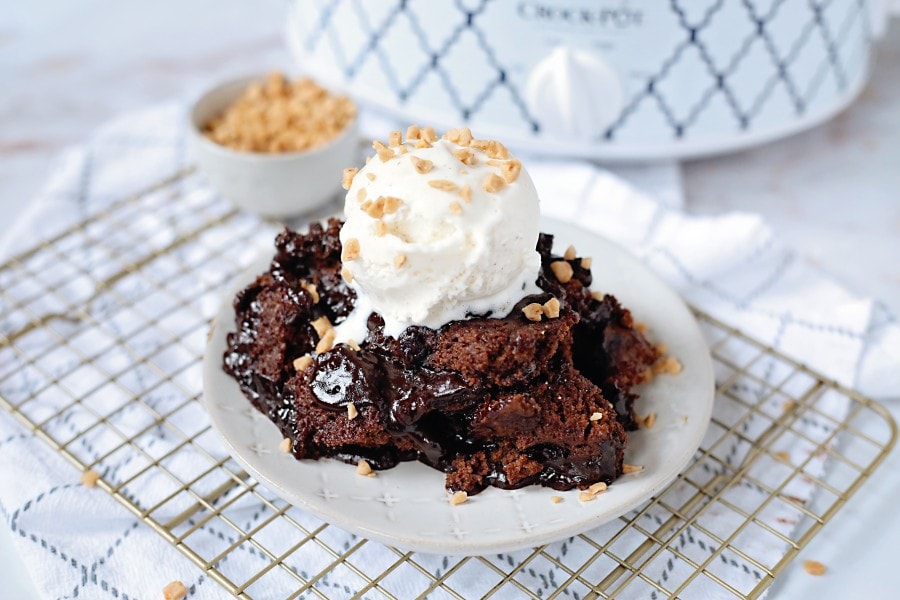 This is a great dessert to make with small kids because they all love to decorate their own slow cooker desserts with chocolate, berries, syrup, candy or whatever!

I LOVE setting up a dessert topping station for everyone to choose from. So much fun.

In reality adults love to decorate their own desserts too!
Chocolate Lava Cake Slow Cooker Style
For a gathering or party, this recipe for simple slow cooker fudge pudding cake is your perfect choice.

All you need to do is bake cake in slow cooker. Then scoop out portions for everyone and leave ample decorating options so everyone can customize their slow cooker lava cake to their heart’s content.

This is absolutely comfort food at its finest and who doesn’t love creating their own awesome dessert? 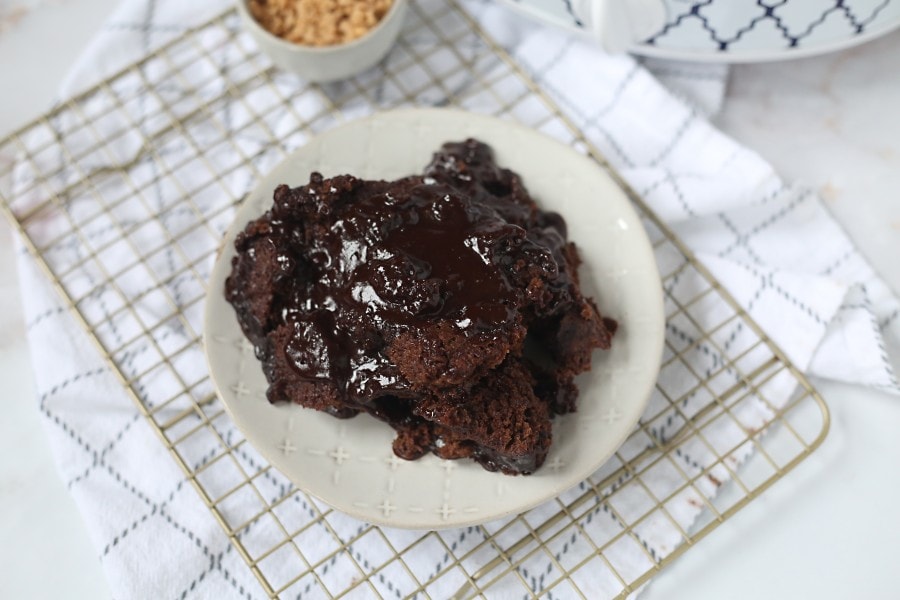 You’re going to love how quick and easy this hot fudge chocolate pudding cake is to make. The homemade batter comes together by literally throwing it all into the slow cooker and then baking it on low for about two hours.

The result is a tender chocolate cake with a rich lava-like center that is like a rich, chocolate fudge sauce. The magic happens on it’s own—the slow cooker does all the work! 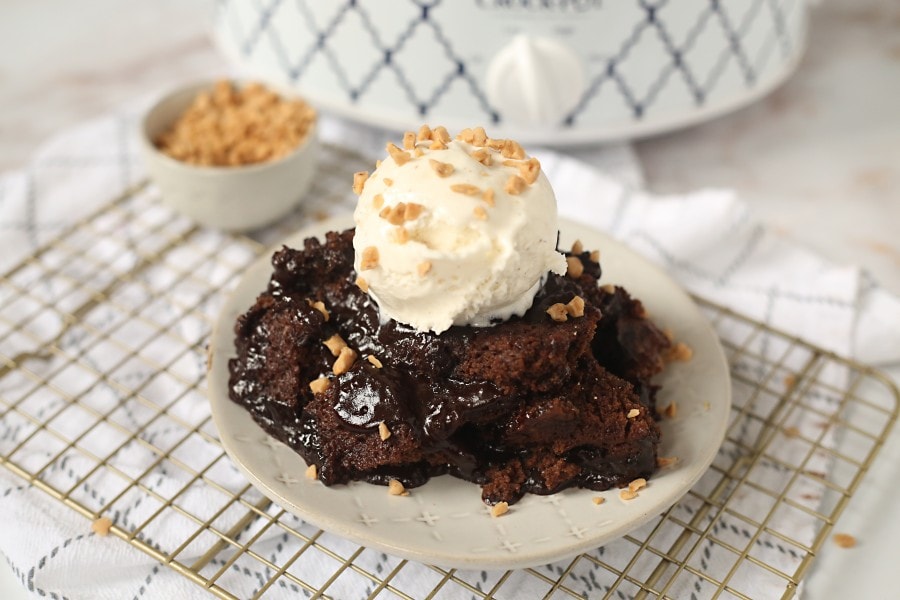 You may be wondering what the difference is between pudding and cake, and why we’re putting them together in this pudding cake recipe.

In general, a pudding is denser than cake, and is more often served in a dish with a spoon while a cake is served on a plate with a fork. This is the easiest way to differentiate the two.

So with this slow cooker fudge pudding cake, we’re baking in a slow cooker, using it as a mini oven. This method doesn’t suit every recipe but it’s perfect for this type of half pudding, half cake. 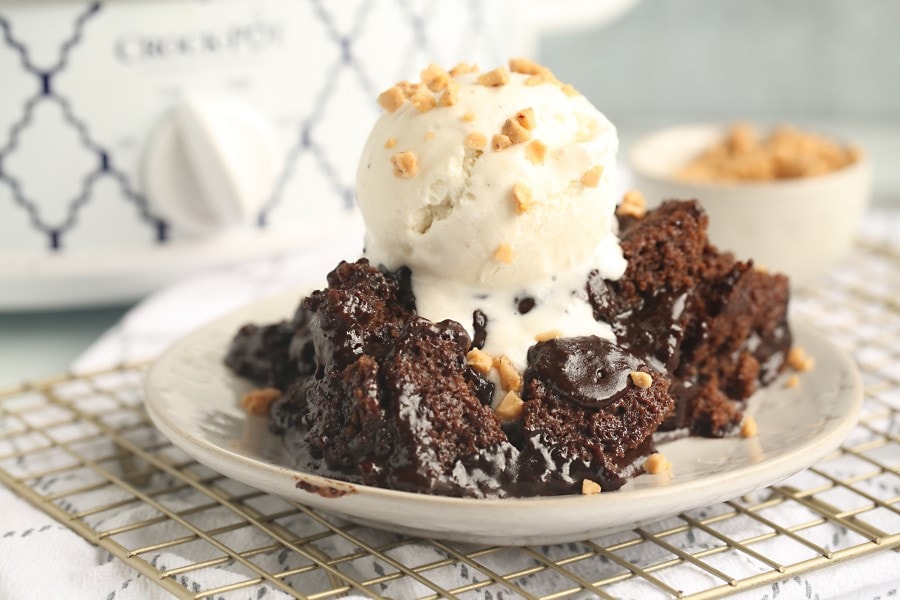 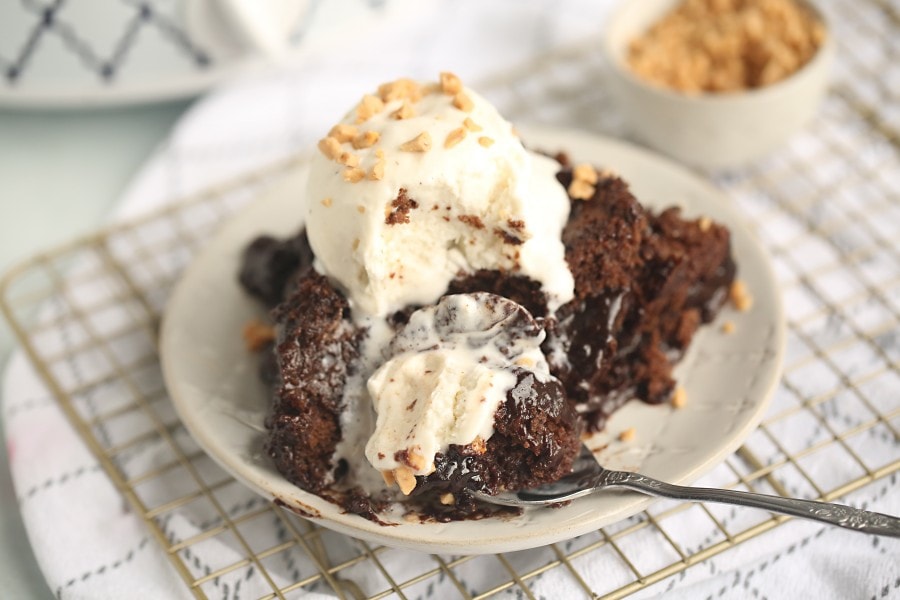 This is a completely non-traditional dessert and it’s so much fun. I’ve suggested toffee bits and ice cream for topping, but it’s totally optional and you can substitute these suggestions for basically anything you think you’d like.

When you lift the lid you’ll see a beautiful, crisp cake top and when you scoop into your chocolate in slow cooker masterpiece come to life with the fudgy sauce on the bottom.

How to make a Slow Cooker Fudge Pudding Cake

Scrape batter into the prepared slow cooker and spread to edges.

Slowly pour boiling water evenly over top. Do not stir.

Cover and cook until the cake is puffed, top is lightly set, and center is gooey when pierced with toothpick, 1 to 2 hours on high.

Discard foil collar. Turn off the slow cooker and let the cake sit, covered, for 10 minutes before serving.

In a bowl, blend together flour, half your brown sugar, 3 tablespoon cocoa powder, cinnamon, and salt.

Mix in milk, vanilla, and butter until blended, and then pour into the basin of a slow cooker generously coated with nonstick.

Sprinkle a thin layer of chocolate chips over it. Set aside.

Pour over your batter evenly, cover, and cook on high for 3-4 hours or until the cake is full and fluffy when touched.

Serve in bowls topped with ice cream and toffee bits.

How to Make a Slow Cooker Foil Liner

First, I have to briefly describe the difference between a crock pot and slow cooker. Simply put, a crock pot is a type of slow cooker made with stoneware that sits in the middle of a heat element surrounding it.

A slow cooker involves a metal bowl that sits on top of a heating element.

Therefore, the hottest spot in a slow cooker or crock pot is the bottom ring or edge and the back near where the power cord is. This is a potential problem that is solved by using a foil liner.

A foil liner acts as an insulator and assists in the prevention of burning your food or in this case a baked good. So the foil liner creates a more even cooking environment and clean up is super easy.

All you do is layer and fold a few sheets (depending on the width of your foil) of heavy duty tin foil, in both directions, before adding anything to your crock pot or slow cooker.

Carefully press foil into every side and edge, especially around the bottom, so tinfoil is touching entire inside of your crock pot or slow cooker. Fold tinfoil ends over edge around the entire top for your lid to sit in.

This foil edge is also how you’ll lift your finished cake out of the slow cooker or crock pot. 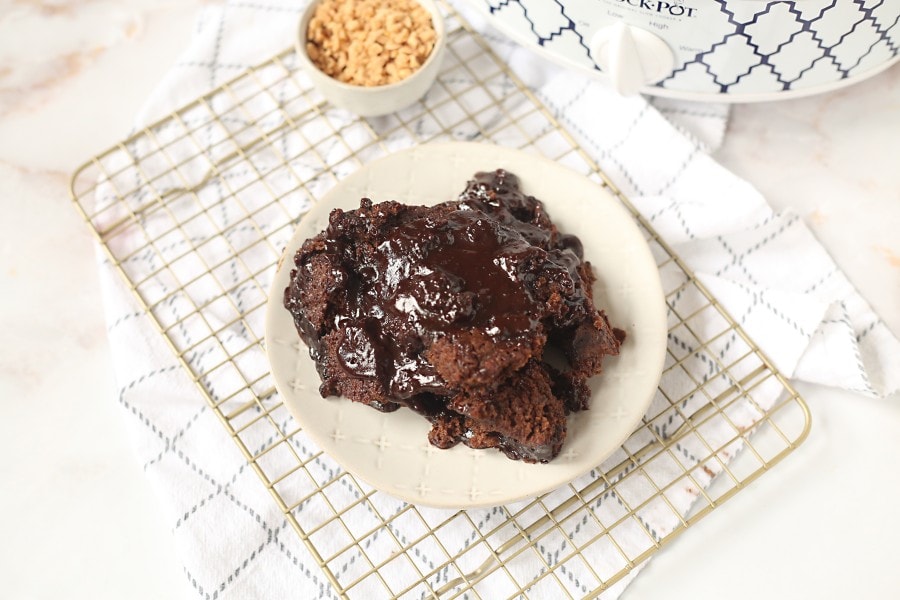 Other Delicious Recipes to Try 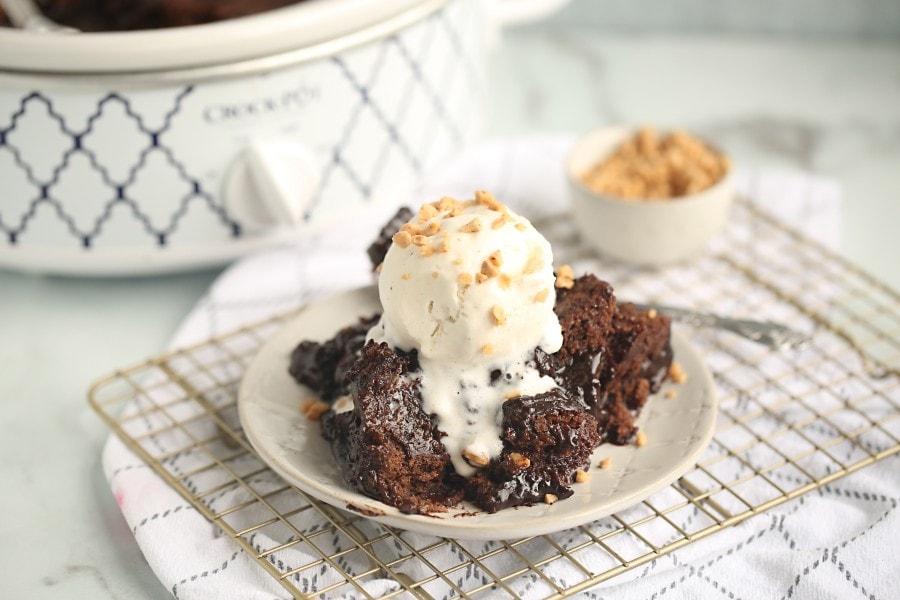 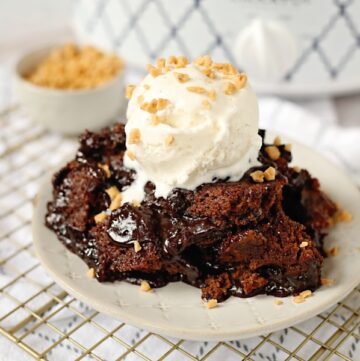 This recipe has been adapted from America's Test Kitchen.com
Keyword chocolate cake, fudge, hot fudge cake, lava cake, pudding cake
Tried this recipe?Let us know how it was! 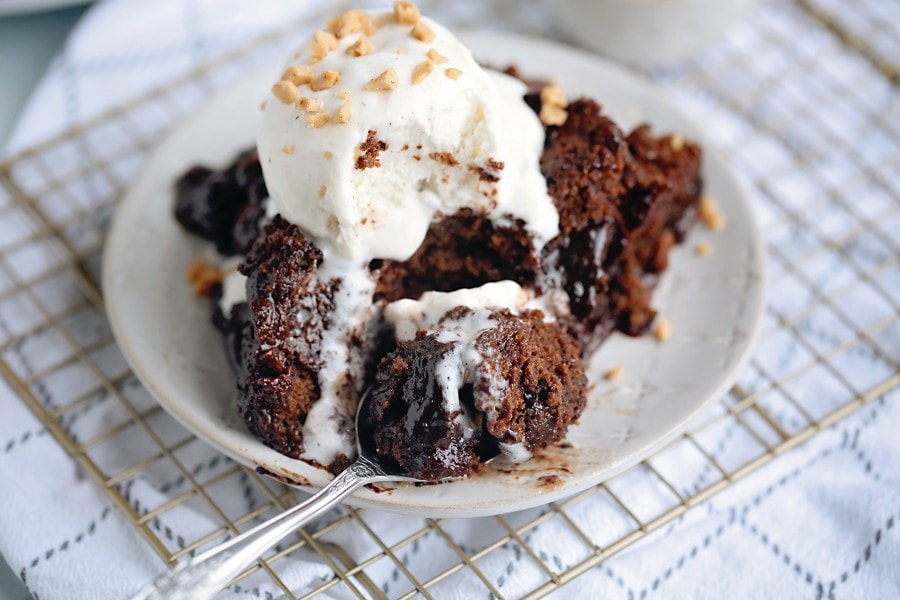