The Best Cream of Potato and Leek Soup is old fashioned, simple, without bacon, with or without cream and the perfect blend of potato and leeks! Served with green onions, cheese, parsley or chives, this soup will not disappoint! 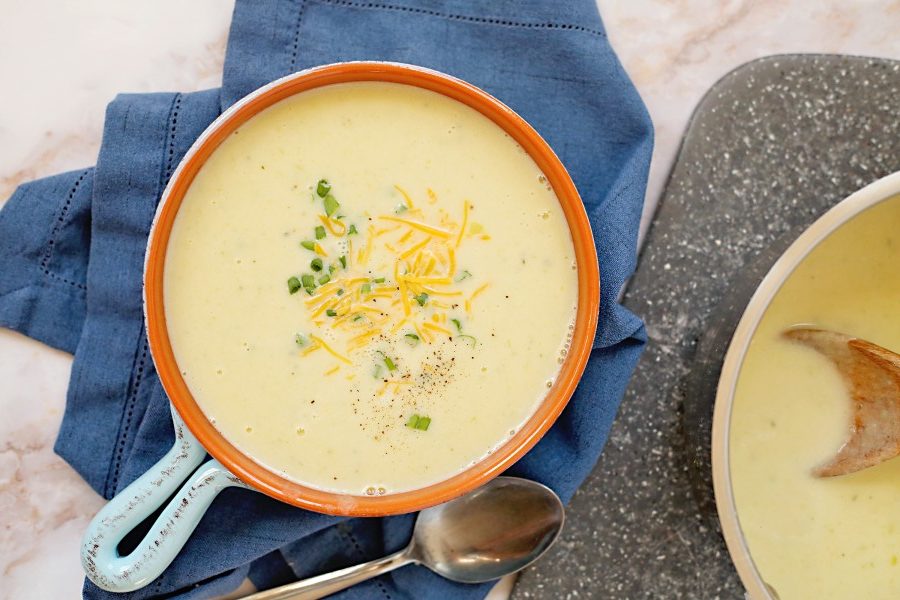 I was just released from the hospital and I had this super easy and delicious soup waiting for me when I arrived home. The Best Cream of Potato and Leek Soup is total comfort, bowl after bowl!  My husband believes this soup even helped me get better!

I suspect truthfully that the soup had little to do with it but I know for sure that I enjoyed eating every last spoonful and I believe you will too! Please let me know in the comments what you think as I always love to hear.

There is something about the way leeks taste with potatoes, especially in soup, that work perfectly together. That being said, I have used regular onions and still enjoyed this soup just as much!

It’s better to use fresh leeks from the garden, although they can be a tad difficult to wash. I also make sure to use mostly the white fleshy part with a little bit of the green leafy part in my recipe. Store bought will work great too but there’s nothing that beats food fresh from the earth.

As I’ve stated in my other posts, my son Patrick used to go nuts when it was time to harvest. He’d pull everything out of the ground and off the stalk with such precision and ease that you’d swear he had about another 20 years of experience.

He’d get dirty but it was easy because we’d just hose him off out back (and the vegetables at the same time). He’d eat the spoils of his work with a giant grin that I remember fondly and it makes me smile when I think of it still.

Soup is so easy to make and takes little time to complete. This Simple Potato Soup is no different. Some would even say it’s “super simple”!

When Patrick was young he used to chomp at the bit to help me make this soup. He loved, and still does to this day, anything cooking related. Some things I would let him assist with and others were just too dangerous. Regardless, he was able to help me with this one.

I would let him hold the immersion blender while I blended the soup. He had strong little hands and was able to keep his fingers on the button. There would be a bit of a mess but it was worth it to see the sheer joy on his face while he watched the soup transform.

This is old fashioned soup is still wonderful comfort food to this day with some modern touches.

Throughout history, potato soup has been quite popular for a variety of reasons. It’s so easy to make and there are many varieties that the possibilities are endless.

Potatoes are inexpensive, widely available and loved by all.  The universal comfort soup which can be dated back to as far as 20.000BC according to some experts. Talk about getting better with age! LOL 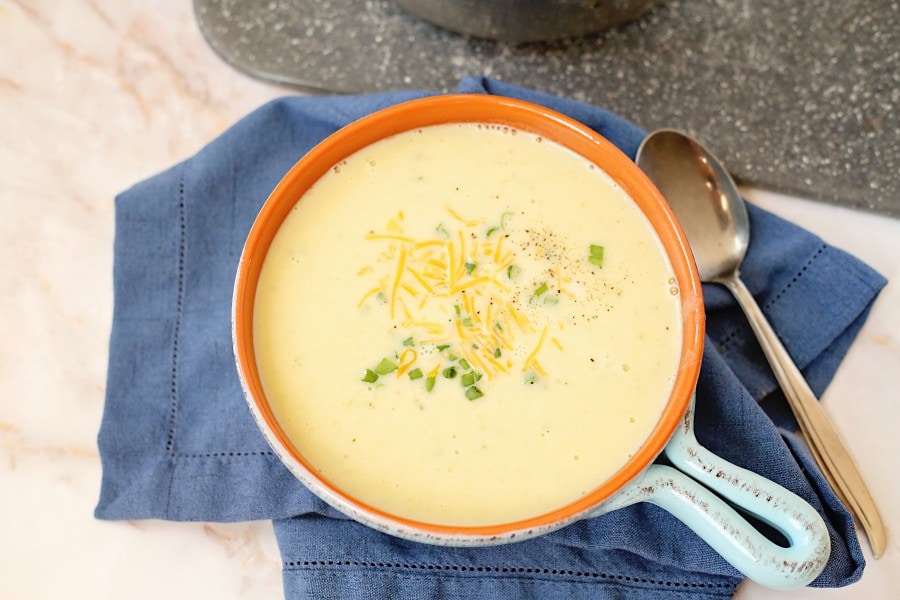 When you’re making an old fashioned potato soup, or modern day potato soup for that matter, there are a few different potatoes that you can use.

It all depends on the skin thickness, starch content, moisture content etc… It also depends on what kind of soup you’re making.  Below I have listed a variety of potatoes and what soups they work best in.

Round White Potatoes  These have a low starch content and a waxy skin.  They also have a higher moisture content which makes them great for soups where you want to put in skin on chunks.

Round Red Potatoes  These potatoes also have a low starch and a higher moisture content as well as a waxy skin.  They are perfect for soups where you want to add color on the skin chunks.

Yukon Gold or Yellow Potatoes  These have a medium starch content, moisture content and skin wax. They are best used in soups where you need the potatoes to work as a thickening agent and when you still want some potato chunks left.

Russet Potatoes  These potatoes are the best for cream of potato or baked potato soups.  Their high starch, lower moisture content and thin skin make them thicken soups quickly so it’s best to use them modestly. 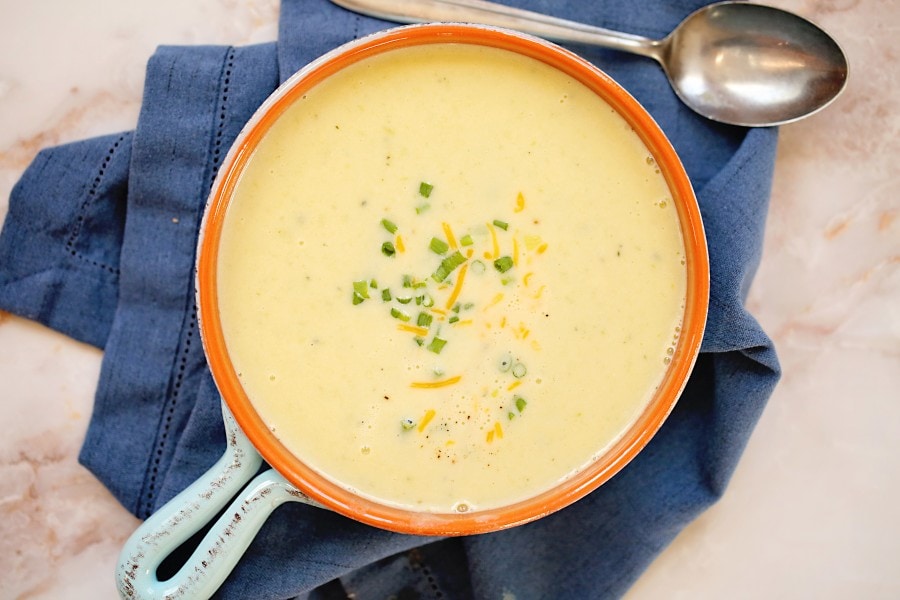 How do you make Old Fashioned Potato Soup ?

Melt butter in a large pot over medium heat.

Add sliced leeks, reduce heat to medium-low, and sauté, stirring frequently, until very soft but not browned, somewhere between 10 and 15 minutes.

Add broth, potatoes, thyme, and bay leaves, and bring to a boil over high heat, reduce to medium-low, cover, simmer, and cook until potatoes are fork tender, approximately 15 minutes.

Puree with a handheld immersion blender, or in batches, in a food processor or blender.

Season with salt and pepper to taste.

Top each serving with a dollop of sour cream and fresh sliced green onions, shredded cheese, parsley or chives as desired. 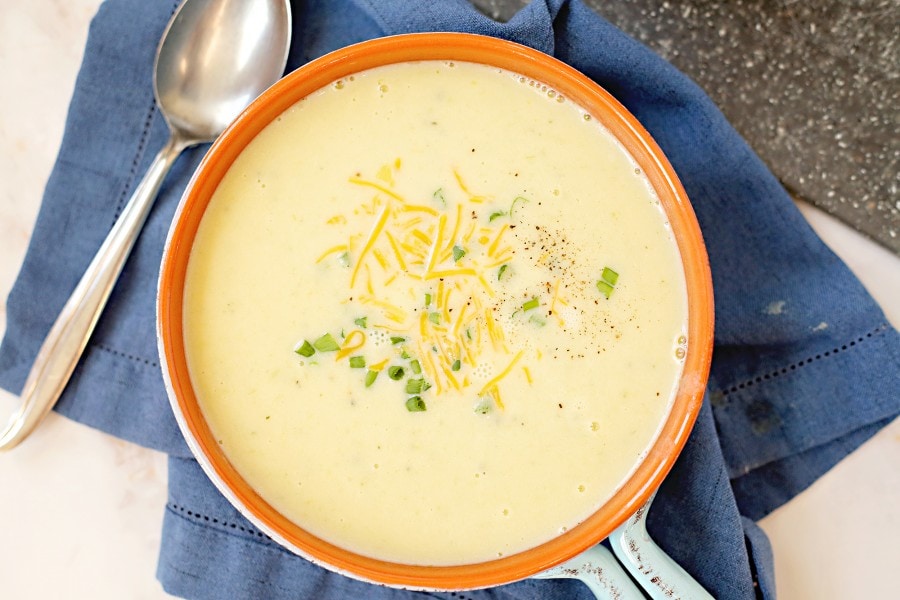 Cream of Potato Soup with Ham or Bacon

Even though this recipe doesn’t call for it, you have the option of adding ham or bacon to this old fashioned potato soup. Most commonly, potato soup is made with bacon or a ham of sorts.

Everyone associates potatoes with cheese, bacon and all that good stuff. Like I said, this recipe doesn’t call for any of that but if you like, feel free to experiment and add what you want.

You want to make your potato soup your potato soup and you can be so flexible with this recipe. Sometimes I add bacon because my husband likes it, other times with leftover ham when I want to get rid of it and sometimes I make it as is.

The beauty of the recipe is that you can do whatever you like with it.

Now I have to mention that if you’re going to add bacon then make sure it’s cooked first. Crispy or chewy, it doesn’t matter, as long as it’s cooked before it goes into the soup.

After all that talk about adding ham or bacon, let’s talk about potato soup without bacon.

I created the final version of this recipe after stumbling upon an old fashioned potato soup recipe I already had, in the winter, many years ago. I seem to recall being sick and I needed something warm, smooth and wet to sooth my throat and help me feel better.

It took me a couple of tries but finally I perfected this comforting soup recipe. So much so that, as I mentioned above, Ken made it for me when I got out of the hospital. Everyone in my family now reaches for this smooth and creamy soup when they’re feeling under the weather.

This cream of potato and leek soup is also great for those of you that can’t eat solid food for a variety of reasons. My friend Kim had her wisdom teeth out a few years back and she swore that it eased her pain. I felt so much pride over my recipe at the time, and still kinda do. 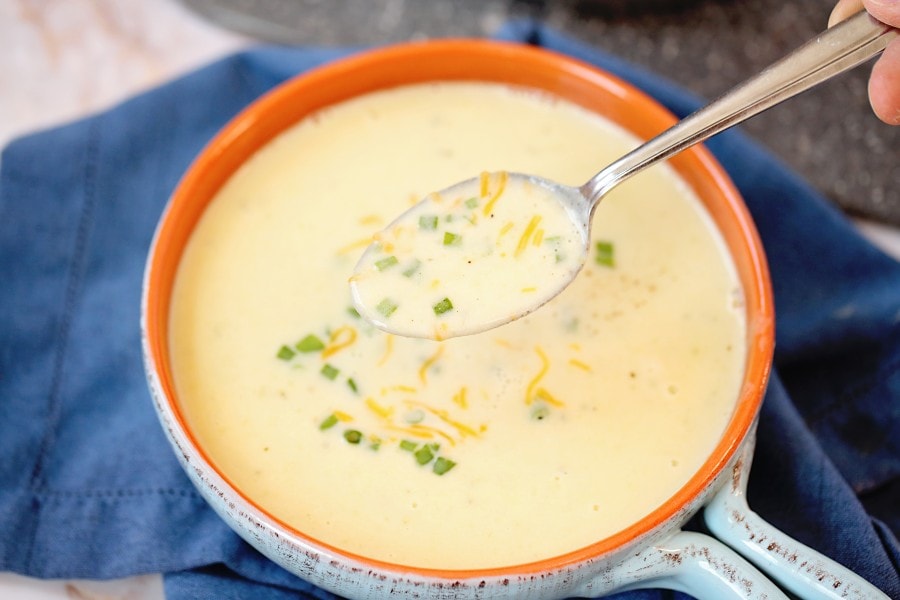 Like any of my other cream soups you don’t have to actually use cream when you make potato and leek soup. The cream adds a richness that you’re not always looking for so it’s great to have this option.

My cousin Sara is lactose intolerant so my aunt makes her all of my soups without the cream. She says that they taste delicious and that she doesn’t feel like she’s missing out on anything. I’m so glad to hear that!

Now don’t get me wrong, the potato leek soup no cream version isn’t only for those that are lactose intolerant.  If you’re looking for something a little on the lighter side but still want comfort food, then this soup version is perfect for you.

Potato and Leek Soup without Cream

Soups that contain milk or cream, like chowders and bisques, don’t hold up well in the freezer — they tend to take on a grainy texture and separate when defrosted and reheated.

This potato and leek soup without cream freezes exceptionally well though (as well as any other cream soups made without the cream). The key is to just omit the cream when you make the soup.

Transfer the blended potato and leek soup (without the cream) to an airtight container in the freezer. When you’re ready to eat it, defrost it in the microwave or on the stove, then stir in the cream and garnish.

Generally, the rule is do not freeze potatoes in soup as they will fall apart when freezing and give you a chunky consistency. Use an immersion blender, if necessary, while reheating the soup.

You can make the soup and keep it in the fridge, covered, in an airtight container for up to 3 days, or frozen for up to 3 months

Then simply add it in when you’ve reheated the soup 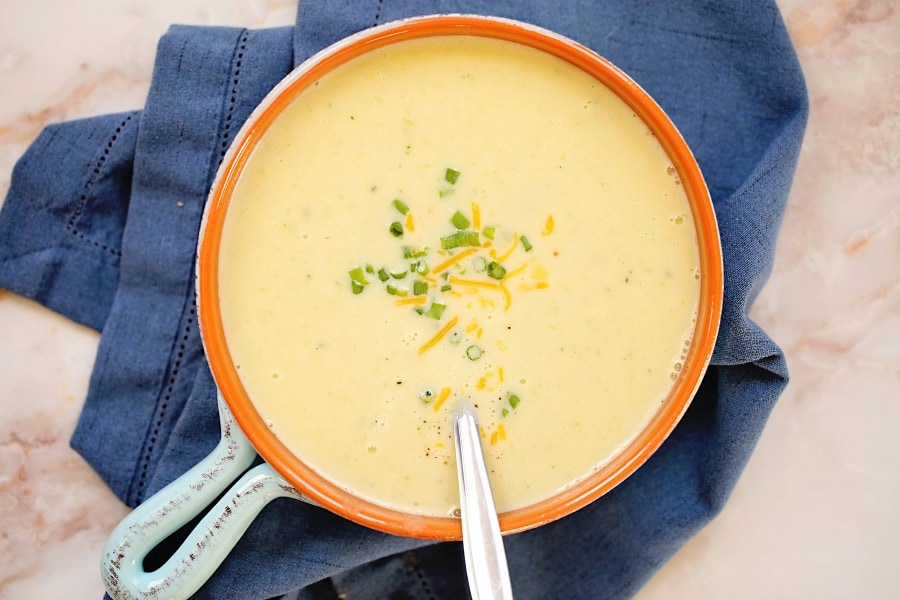 I have included a list of my favorite cream soups below and it’s it’s true that I don’t always include the cream in all of them because they ALL taste great without it, in my opinion.

I recommend tasting your soup before adding the cream, whenever possible, to get the taste you are looking for or desire.

I also don’t always blend or puree the soups after they are made either. Sometimes I just don’t feel like doing it and other times I am just in the mood for a chunky soup. Taste yours and see what you prefer.

My Grandma’s Cream of Tomato Soup

The Best Cream of Broccoli Soup

Other Soup Recipes to Try

The Best Cream of Potato and Leek Soup Video 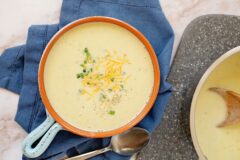 The Best Cream of Potato and Leek Soup

The Best Cream of Potato and Leek Soup is old fashioned, simple, without bacon, with or without cream and the perfect blend of potato and leeks!

Simple and delicious recipes delivered to your inbox!

Sign up today and never miss out on a Kitchen Divas creation again.