This easy, no bake banana pudding trifle is created and served in individual serving cups, and it filled with rich, creamy goodness. It’s the best of both worlds!

You always have the option of making a 13 x 9 inch instead, but I prefer these individual serving bowls. So much prettier than scooping a portion into a bowl but a little more work.

As always the decision is up to you. You won’t be disappointed either way.

I’ve left out the best part of this dessert recipe. It’s a no-bake cheesecake recipe, too! Don’t turn on the oven. Don’t make a mess with multiple pots and pans, and last but not least don’t stress out trying to figure out if your dessert is “done” baking in the oven.

All you need to do is follow the simple steps to make this simple treat. It’s literally as easy as that. I’m still in awe every time I make this banana dessert recipe because it’s crazy simple and crazy good.

As a matter of fact, I don’t know why I don’t make it more often. In my book, a no-bake cheesecake recipe is always a good idea.

Especially when a recipe is this versatile. Imagine using some chocolate pudding? or chocolate wafers instead of vanilla? Strawberries sliced up instead of or with the bananas?

Now do you see how much fun you can have with this dessert? The fun is never ending. That’s why I LOVE this banana pudding cheesecake trifle.

That is why you will love it too. 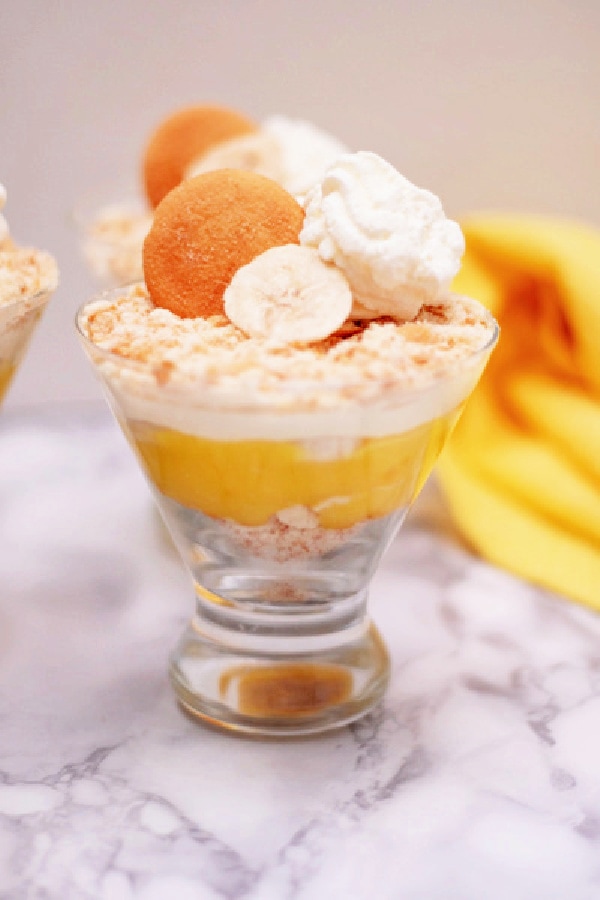 How We Go to No Bake Banana Pudding Cheesecake

This easy no bake banana pudding cheesecake is a delicious little mini-trifle dessert that is always a winner. It’s the best of two of our favorite desserts – banana pudding and cheesecake.

Without them, we wouldn’t have the recipe I’m about to share with you. So let’s take a look at how we got here.

Banana pudding is one of those desserts that is always associated with the southern United States, however, it didn’t actually begin there.

In fact, the first recorded mention of a banana pudding recipe is found in an 1888 issue of Good Housekeeping, a Massachusetts-based magazine. That’s about as far from the south as you can get.

The recipe was really just a variation on a trifle, the classic European dessert. Over the years, the dessert made its way across the United States, becoming a particular favorite in the south where southern cooks put their own stamp on it, the biggest change coming in the 1920s.

It was during that time that the traditional sponge cake for the pudding was replaced with vanilla wafers.

Thus, the classic southern version – and the version that most of us think of today – of banana pudding was born. What’s incredibly interesting is that even this version wasn’t made exclusively in the south.

However, in 1933, a syndicated column showcased a recipe for Southern Banana Pudding, and it just sort of took off. From there, papers and recipe books began to associate the dessert with the deep south.

Cheesecake has a long, long history. In its earliest forms, cheesecake is mentioned by Aegimu, a 5th century BC physician. A later, more closely related version called sambocade can be found in Forme of Cury, an English cookbook from 1390.

Over hundreds of years, Europeans began removing yeast from cheesecake and adding beaten eggs instead. Around the 18th century, with the overpowering yeast flavor done away with, cheesecake became more of what it is today.

My family loves banana-flavored anything and this recipe is always at the top of their “want” list. It’s literally comfort food in a fancy dessert bowl.

And since I’m an adult, I’m the type of person that is always going to eat their dessert first. (it has bananas in it so that counts as healthy, right?)

I’m a huge fan of this dessert because it’s nice and cool and creamy. I love the way that it makes me feel like summer is already here.

It also reminds me of the banana pudding dessert that my grandma used to make when I was little. I have such fond memories of this wafer and pudding recipe. It’s so near and dear to my heart! 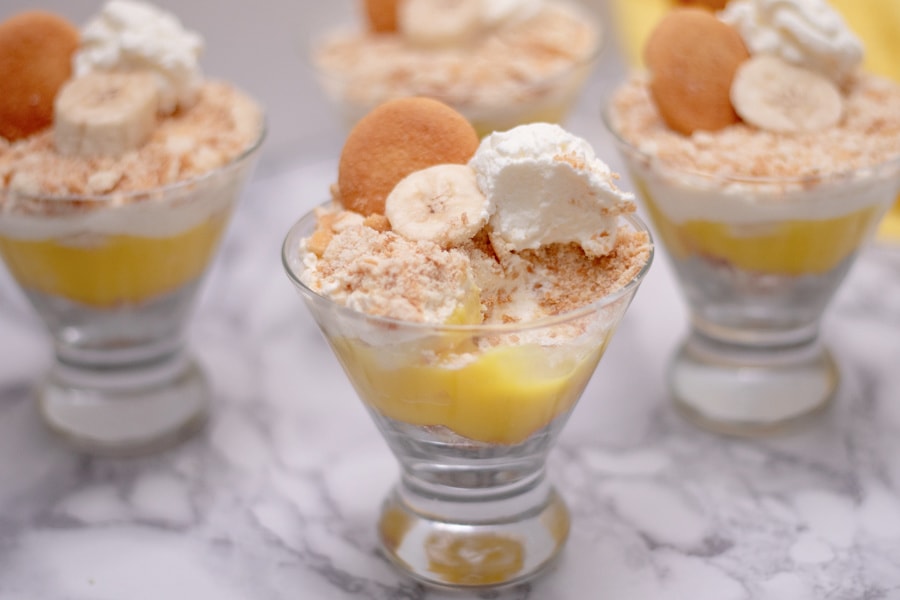 Everything you need to make this easy no bake banana pudding cheesecake dessert is easily available at your grocer and probably already in your kitchen. This banana pudding trifle recipe has just about the easiest list of ingredients you’ll find.

You’re about to see why I love this easy cheesecake recipe. Here are a few tips to remember as you’re making this dessert dish. Literally, everything used to make this recipe is pre-packaged.

There’s absolutely no cooking involved whatsoever with this recipe. You’ll simply be mixing, layering, and refrigerating. That’s it. That is all there is to it. It doesn’t get any easier. Woo hoo!

In fact, it’s so incredibly simple, I’m foregoing the highlights that I normally add to my posts because there are no highlights. Seriously. Just unbox, mix, layer, and refrigerate. That’s the entirety of this recipe. Pretty… sweet… eh? Sweet. See what I did there?

This easy no bake banana pudding cheesecake trifle recipe is seriously the easiest thing you’ll ever make. That being said, there are still some things to keep in mind.

There’s no way you can really completely ruin this recipe, but if you follow these tips you’ll make the best possible banana pudding dessert you’ve ever had.

Add to the Fridge to Thicken

Once you mix the pudding and milk, you need to set pudding mixture in the fridge and let it thicken up.

Use an Electric Mixer for Mixing

I’m always really tempted to mix everything by hand but an electric mixer is needed to mix the sugar and cream cheese. This will get out the lumps and make it nice and creamy.

You just can’t get the same super-smooth texture that you get from an electric mixer when you mix by hand.

Spread out the mixture carefully

Since you’re going to be spreading to the bottom of the baking dish, you need to be careful that you don’t jumble about the cookies. Just use a spatula and be careful in how you spread. Slow and steady wins the race here. Take your time and spread slowly and evenly, and you’ll have a great result.

Make certain that you slice the bananas thick enough that they hold their texture in the dish. I’ve found that ½ inch seems to be a great size for this recipe. Any thinner and the bananas turn to mush. If you go thicker, they’re a bit too much in one bit.

Pop in the fridge to chill

Once you have the entire dessert done, just pop it in the fridge to chill. This will help all the flavors mesh perfectly together and make every bite perfect. 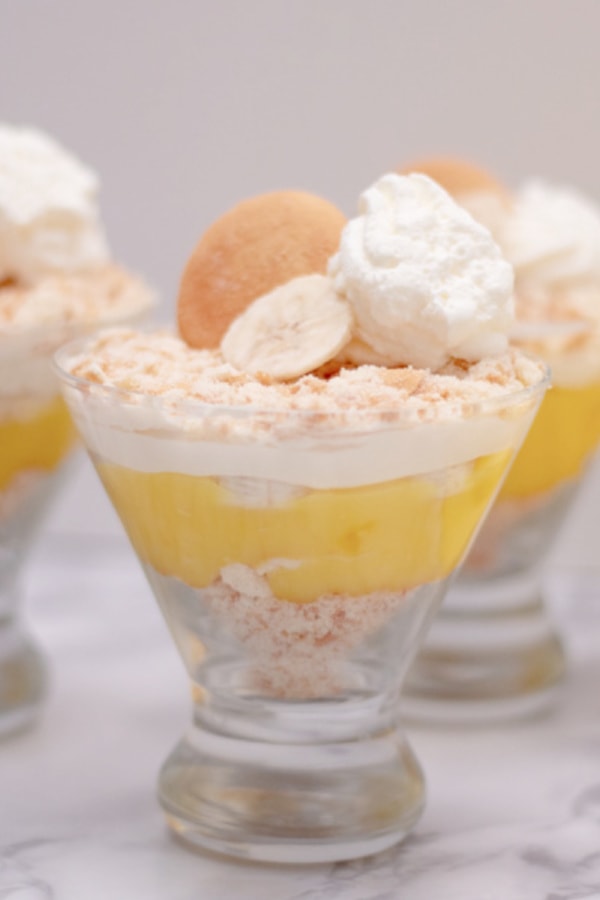 There are a few things I want to go over here that will answer some of the most common questions associated with making this dessert. These range from bananas turning brown to mushy wafers and more.

Why are my sliced bananas turning brown?

This is important to remember! Slicing your bananas needs to be something that you do at the end because if you slice them too early, the air is going to combine with the chemical makeup of the bananas and cause them to turn brown.

This doesn’t affect their taste or flavor AT ALL but it doesn’t really look all that appealing to eat. I always wait until I’m ready to serve to cut the bananas for this dish.

What if I don’t want mushy vanilla wafers?

The bottom layer of this cheesecake dessert will turn mushy, no matter what. If you want to add a bit of a crunch, you can always add fresh wafers or freshly crumbled wafers to your dish each time that you serve it up.

The bottom layer is going to be soft just because the pudding is directly on top of it. This will cause the wafers to become soft instantly.

Can you freeze banana pudding and wafers for later?

In my opinion, I wouldn’t. While I’m certain that you can, I think that this dish is best served fresh and chilled. Freezing it might change up the texture quite a bit and cause it to become a totally different dessert than you’re expecting.

It’s always a toss-up when you freeze a recipe with cream cheese because it can definitely create a different texture quickly. The same can be said of pudding, as well. Defrosted pudding has an odd texture that I don’t find appealing at all. 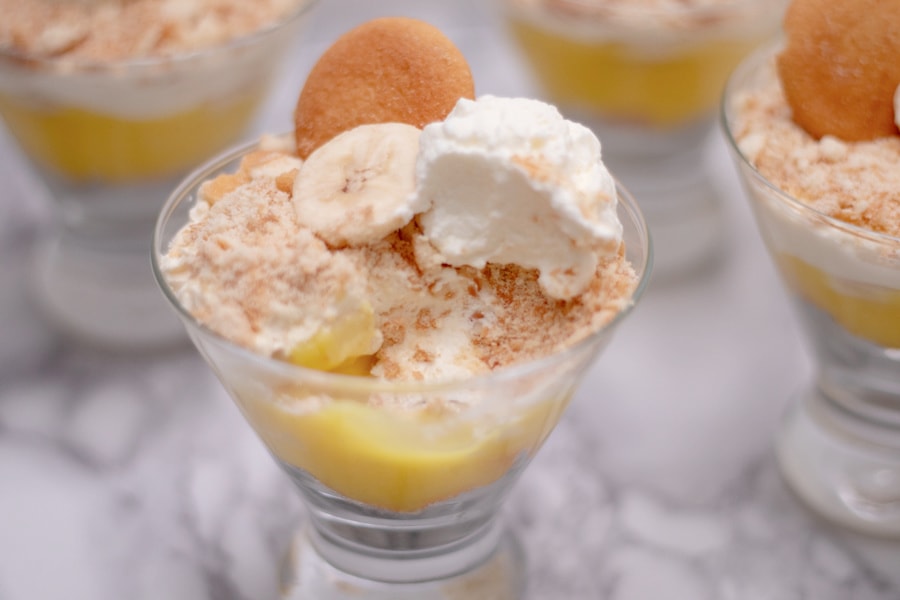 Once everyone has scooped out their servings, just pop a lid on this dessert and store it in the fridge. As long as you’re keeping it cold and chilled, there should be no issues about it staying good and ready to eat for a few days.

If you want to add on other toppings, you can! I really like to add on crushed graham crackers, shredded coconut, and even mini chocolate chips sometimes, too. Just a simple way to make a dessert new over and over again.

I can’t wait to hear what you think about this banana treat. It’s such a huge hit every time I make it and I think that every family should be able to whip this up on the spot! Once you make it once, you’re going to love the ease of this recipe.

This easy no bake banana pudding cheesecake dessert is one of the tastiest and easiest desserts you’ll ever make. Essentially a mini banana pudding trifle in every serving dish, this recipe requires no cooking or baking whatsoever, making it perfect for every occasion imaginable. Give it a try, and I’m sure you and your family will agree that it’s a winner.