This banana pudding cookies recipe takes two desserts we all love and mashes them together into the ultimate sweet treat. Classic banana pudding flavors and ingredients are combined together to form a cookie dough that’s baked to golden brown perfection in the oven.

This banana pudding cookies recipe feels like the most creative thing I think I’ve ever made. I’ve been making both cookies and banana pudding for years. I love them both. So much.

I even have an AMAZING recipe for banana pudding brownies that is definitely worth a look too.

It just makes so much sense. After all classic banana pudding incorporates both banana pudding and Nilla Wafers, which are really just a kind of cookie, right? Right. So I got to work.

It took a few passes to get everything just right, but I finally managed to do it! This banana pudding cookies recipe is the perfect marriage of cookies and banana pudding all rolled up into one delicious treat.

You guys, it tastes JUST LIKE banana pudding but in a cookie. I couldn’t have done anything better with this recipe, which is why I can’t wait for all of you to try it. It really does combine to classic desserts perfectly, and I know you’ll agree when you try it.

Okay, so by now you all know that most of my recipes have a little history section. If you’re not into that, just skip it, but I suggest giving it a read. It’s always fun to learn a little bit about the food we eat.

At least, I think it is. I like to keep this section relatively short to encourage as many of you as I can to read it, so let’s take a look at banana pudding and cookies, shall we? Without them, you wouldn’t be able to make this recipe!

Most food historians believe that cookies have their beginnings in 7th century Persia, where they were believed to have been created shortly after the use of sugar became relatively common in the region.

From Persia, cookies made their way to Europe through the Muslim conquest of Spain. By the 14th century, the popularity of cookies had spread such that they were a common foodstuff found throughout society from royal families and the social elite to common street vendors.

At around that time, global travel was becoming widespread, and cookies made a natural food to bring along on journeys. They became the standard of travel food, at that time, a modern equivalent of travel cakes that had been used throughout history.

Cookies made their way to America via the Dutch settling in New Amsterdam in the late 1620s.

It wasn’t until the 18th century that the modern style of creaming butter and sugar as a base for cookies became common. After that, the rest, as they say, is history. This new, sweeter way of making cookies took the world by storm, and today, it’s the only thing we think of when we think of cookies.

Banana pudding is one of those desserts that is always associated with the southern United States, however, it didn’t actually begin there.

In fact, the first recorded mention of a banana pudding recipe is found in an 1888 issue of Good Housekeeping, a Massachusetts-based magazine. That’s about as far from the south as you can get.

The recipe was really just a variation on a trifle, the classic European dessert. Over the years, the dessert made its way across the United States, becoming a particular favorite in the south where southern cooks put their own stamp on it, the biggest change coming in the 1920s.

It was during that time that the traditional sponge cake for the pudding was replaced with vanilla wafers.

Thus, the classic southern version – and the version that most of us think of today – of banana pudding was born. What’s incredibly interesting is that even this version wasn’t made exclusively in the south.

However, in 1933, a syndicated column showcased a recipe for Southern Banana Pudding, and it just sort of took off. From there, papers and recipe books began to associate the dessert with the deep south.

Although banana pudding goes hand in hand with the south, it’s actually quite popular all across North America. Take me, for example. I’m as far from the southern United States as possible, really. I live in Canada. But here I am talking about combining this classic southern dessert with cookies!

It really does taste just like banana pudding! My family and friends all flip for this recipe. Each bite is pure heaven. This cookie is baked to golden perfection and loaded with delicious flavors like banana pudding, Nilla Wafers, and white chocolate chips to finish off that perfectly combined banana pudding and cookie vibe.

I can promise you that you’ve never had cookies like these before, and you’ll find yourself making them again and again. They’re that good. They’re also super easy, which is a huge bonus. 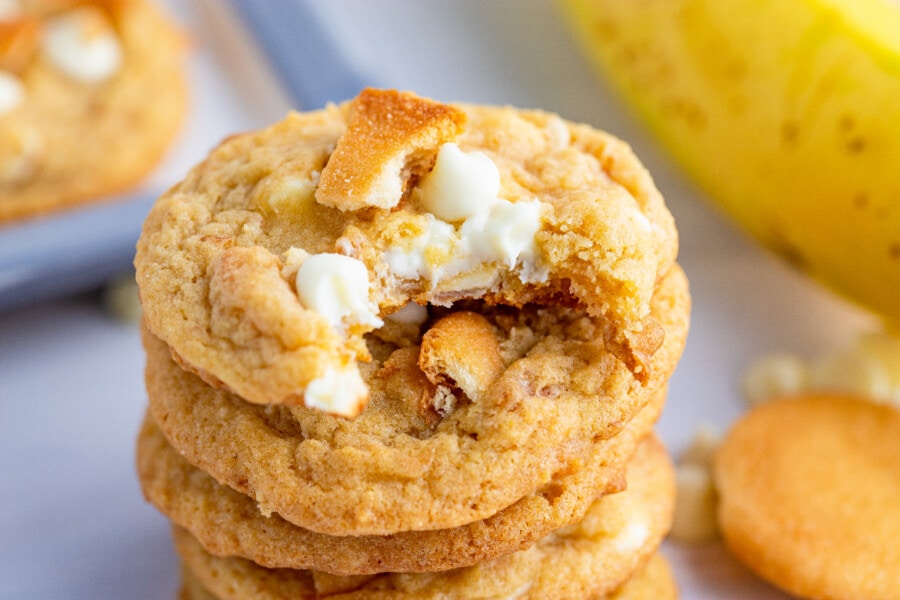 It only takes a few simple ingredients to make this delicious recipe. These cookies use a basic cookie recipe, which means that almost every ingredient on the list is a kitchen staple. The only things you might have to buy especially for this recipe are the Nilla Wafers and the banana pudding mix. Otherwise, everything on this list is almost certainly already in your refrigerator or pantry. Here’s what you’ll need.

That’s all there is to it. Every ingredient on this list is simple, and the process of putting them together is simplicity itself, as well.

Making this banana pudding cookies recipe is as easy as getting the ingredients together for it. It’s a simple cookie dough recipe that comes together quickly, which means you’ll be in and out of the kitchen in no time and ready to serve up a try of some of the best cookies you’ll ever make. 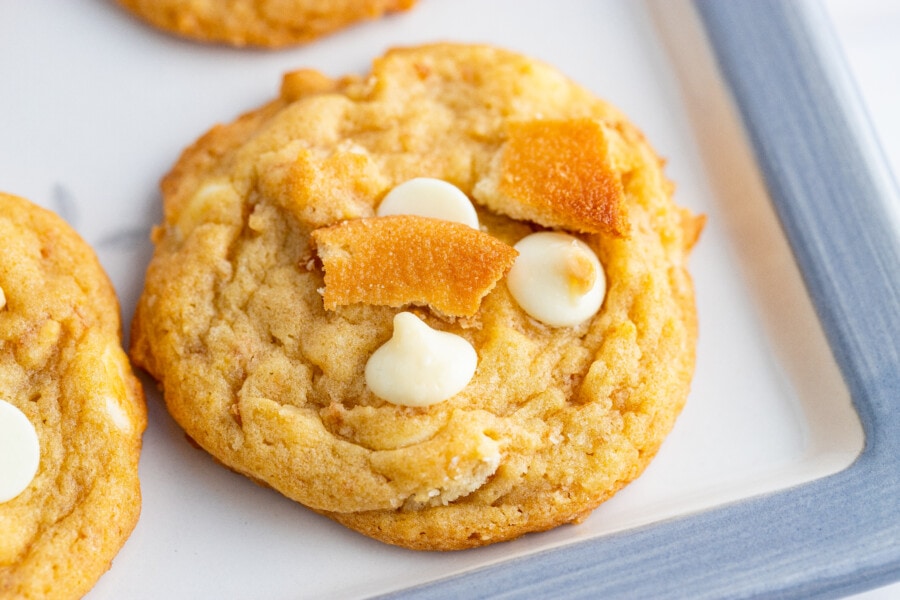 This recipe is very simple. In fact, you’d have to actively try to sabotage it to ruin it. That being said, there are a few things you can do to take this recipe from good to great. These little tips can make a big difference so don’t skip them!

Your butter should be completely softened before you cream it with the sugar. Don’t try to force it by throwing in partially softened butter or trying to soften it in the microwave. Just let it come to room temperature on its own.

Butter that isn’t fully softened will leave you with batter that has little lumps of pure butter in it, which isn’t what you want. Melted butter also won’t do the job that softened butter will do. You won’t get the same texture.

This banana pudding cookies recipe calls for added salt, so don’t blindly grab your butter if you keep both salted and unsalted in the fridge. Also, don’t assume you can substitute salted butter for unsalted butter.

Baking is a science, and if your ratios are off, your cookies will cook differently than they should They’ll also taste salty, which isn’t what you’re after in this recipe.

It’s important that you mix this cookie dough until it’s just combined. Don’t overmix it. Overmixing dough adds more air to it than you want. This causes the cookies to rise and then fall during baking, resulting in flatter, crispier cookies. Although crispy cookies are great, these cookies aren’t meant to be that way.

These cookies will last for about three days at room temperature or about a week in the refrigerator in an air-tight container. For longer storage, you can freeze them for up to five months in an air-tight, freezer-safe container or heavy-duty freezer bag.

It’s been my experience, however, that they’re usually gone in a couple of days. 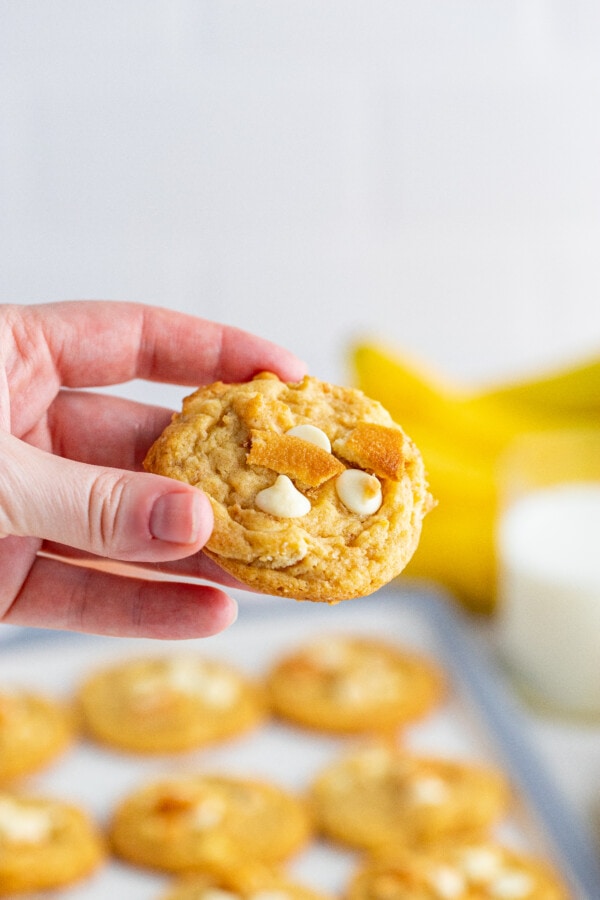 I can guarantee that you’ve never had cookies quite like these banana pudding cookies before. You have to try them. They’re absolutely delicious, filled with authentic banana pudding flavor, and so easy to make.

With a combination like that, why wouldn’t you give them a try? They’re perfect for afternoon snacks, weeknight desserts, potlucks, holiday get-togethers – any time, really. Everyone always loves them! 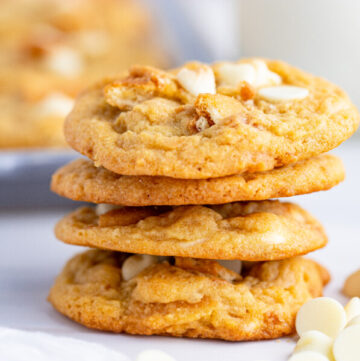 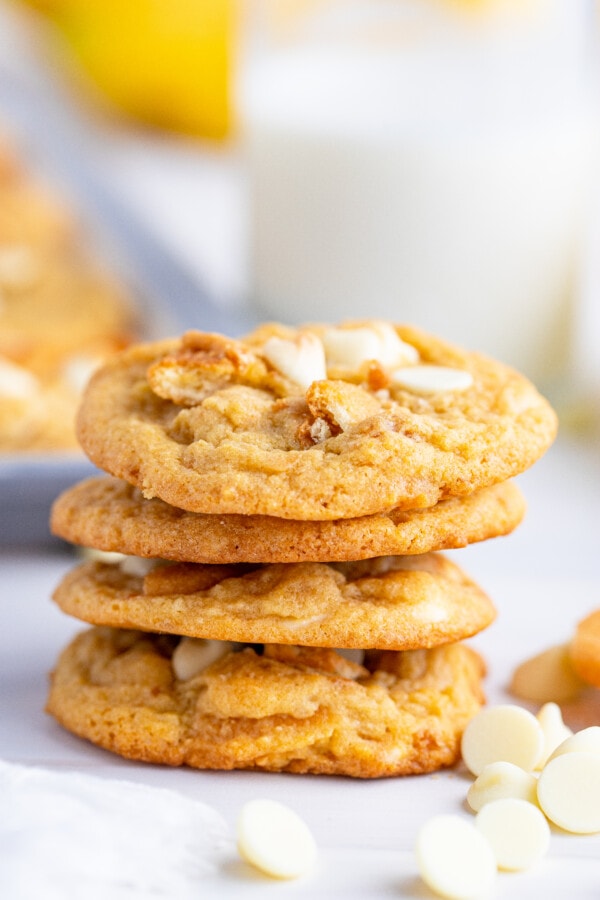