Air fryer apple crisp has all the delicious flavor we love about traditional apple crisp with an even more delicious crumbly topping. The air fryer helps make the crisp topping even crispier and more intense with flavor, creating an apple crisp that's the next evolution of this classic dessert. 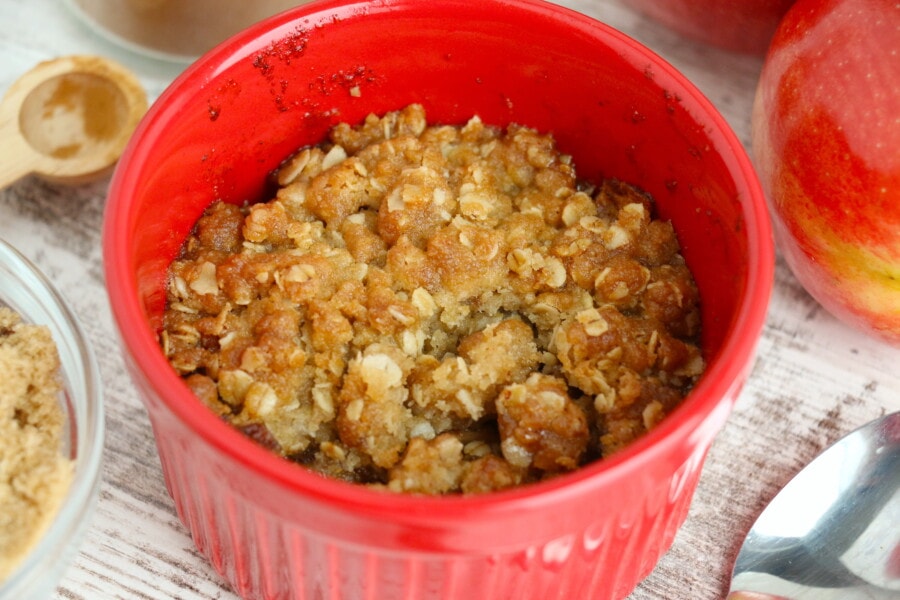 Apple crisp has been a part of my life since I was a little girl. In the fall, when the apples were fresh, my grandmother would make the most delicious apple crisp I've ever had, even to this day.

It was so rich with cinnamon and brown sugar flavors and topped with the most delicious, crisp, and crumbly topping ever. It was a simple ingredient, but I think the secret was all the love that went into it.

Of course, the crisp, fresh apples, and oatmeal crumble topping didn't hurt, either. But still, I think it was the love. That's why I've been making my apple crisp with an extra scoop of love ever since I was married.

My husband and son have always loved my apple crisp - the recipe I got from my grandmother, by the way - and so has everyone else who's ever tried it.

Since I got my air fryer, I've been on a mission to make everything possible in it, which is why I took this classic apple crisp recipe and converted it to a delicious air fryer treat.

It's so good, so crispy crumbly, and so packed with flavor. It's a real winner all the way around.

First thing's first. If you live in the USA, you're probably looking at these pictures thinking, "This isn't an apple crisp, it's an apple crumble." This is where the history of apple crisp begins.

Because fun fact, here in Canada, we use the terms "apple crisp" and "apple crumble" interchangeably. The same is true in the UK, Australia, and New Zealand!

Although apple crisp is a family favorite for so many, it's a quite modern dish, historically speaking. In fact, its earliest appearance wasn't until the mid-1920s.

We can be relatively certain that the dish wasn't around before then because it's notably absent from the first edition of Fannie Farmer Cookbook, a comprehensive collection of American recipes.

The earliest reference to appl crisp is found in 1924 as a recipe in the Everybody's Cook Book: A Comprehensive Manual of Home Cookery. In that same year, it was also featured in a newspaper article in the Appleton Post Crescent in Appleton, Wisconsin.

Although quite new, apple crisp and apple crumble have both become North American and British dessert traditions. In the USA, the popularity of the dish saw a meteoric rise during World War II when food rationing severely limited access to pastry ingredients needed for apple pies.

While these ingredients were scarce, the oats and other ingredients needed for apple crumbles and crisps were readily available.

Fast forward a few decades and apple crisp is a traditional favorite among many families, especially during the fall when apples are in season.

It's also worth noting that some sources cite England as the birthplace of apple crisp, as well. I'm no food historian, so I'm not sure. I'm not sure anyone else is, either. What I know for sure is that it's delicious. 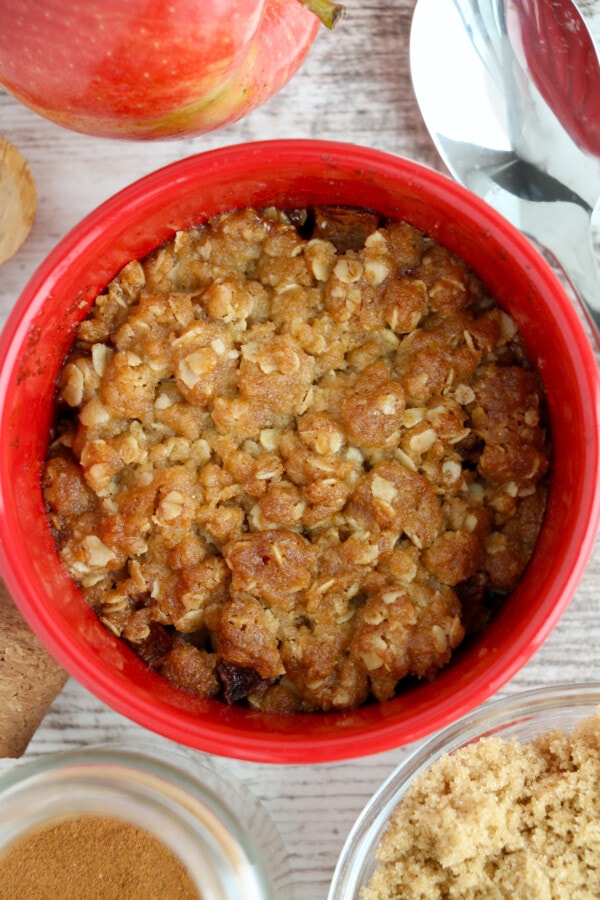 Why You Should Use an Air Fryer

Air fryers are the bee's knees. The cat's meow. They're the best thing since sliced bread. Well, you see where I'm going with this.

The great thing about making apple crisp in the air fryer, is that you can whip it up so quickly, and it's so cute in its little individual ramekin serving bowls!

In addition to the ease of preparing individual apple crisps, the air fryer gives the topping for this dessert a little something extra.

It takes that classic, crumbly texture and crisps it up even more for an extra added crunch that works so perfectly with the sweet, tender apples. It's just perfection.

Air fryer apple crisp takes everything we love about traditional apple crisp and makes it even easier. It also adds a bit of extra crispiness to the sweet oat topping that is just so wonderful.

It's the perfect dessert for any occasion, from a week night dessert to potlucks and backyard get-togethers. Of course, it's also always a welcome addition to any potluck or holiday table.

It doesn't matter when or where it's served, everyone always loves it. You'll love how easy it is to make, too! 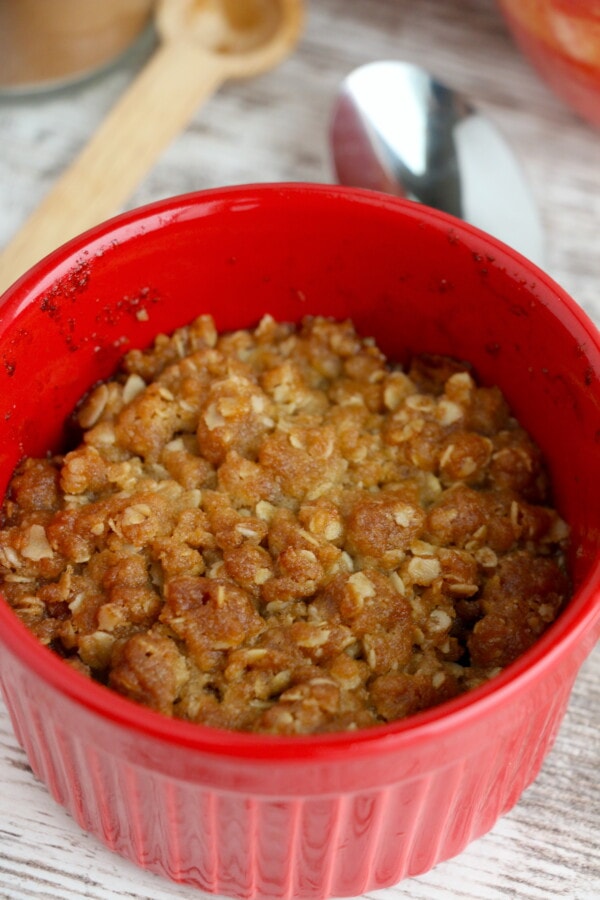 One of the great things about this air fryer apple crisp recipe is how easy it is to make, and that starts with the ingredients. It only takes a handful of ingredients to create this delicious dessert that we all know and love.

The best part is that almost all of them are already in your kitchen. Absolutely the only thing you might have to buy is apples. All of the rest of the ingredients are kitchen staples. Here's what you'll need:

That's all there is to it! I want to point out that these are all the ingredients needed for both the apple base AND the crisp topping. That's a pretty simple list, wouldn't you say? 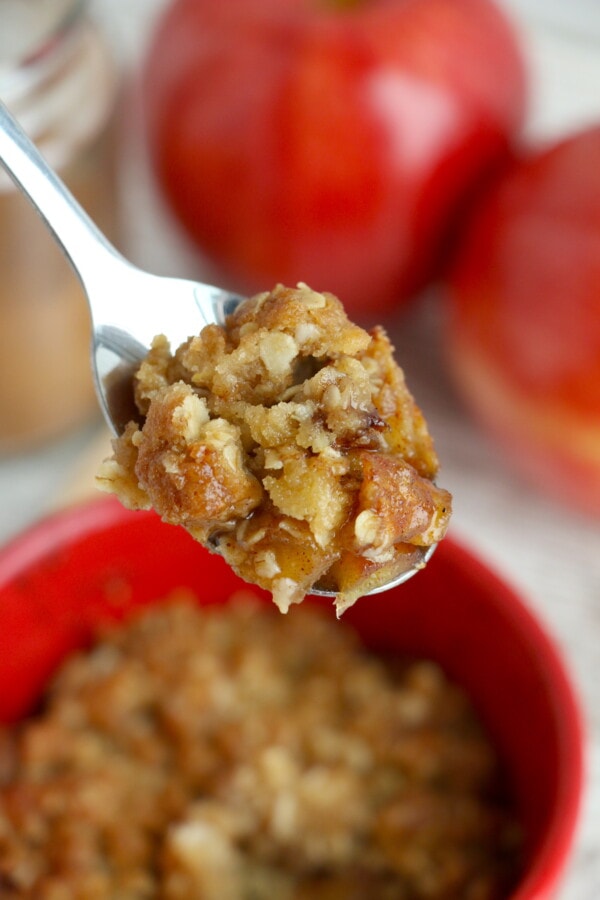 If you think the ingredients list is simple, just wait until you see the recipe. This is an exceedingly simple dessert. The most work you'll do is dicing up the apples. After that, it's all a matter of mixing and air frying. It couldn't be easier.

As always, these are just the highlights. You'll find the complete recipe with amounts and full instructions in the recipe card below, but honestly, these highlights are almost the entire recipe. 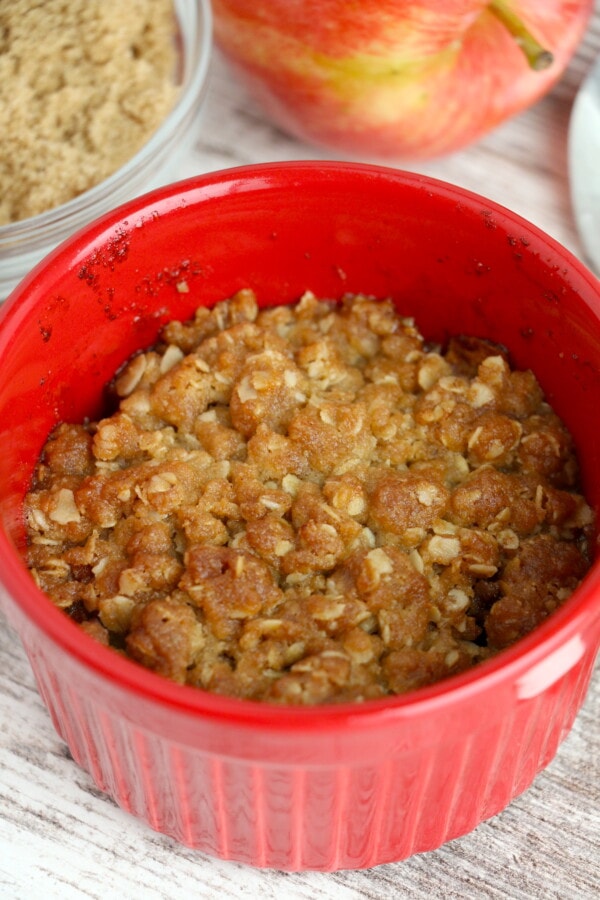 Apple crisp is best served either just as it is or topped with a dollop of vanilla ice cream and a little caramel. The classic pairings are always the best in my opinion.

There's just nothing better than cold ice cream melting over warm apple crisp covered in caramel. MmmMMM! Now I'm going to have to make some more.

This air fryer apple crisp is simply that good.

This classic dessert is great for weeknight desserts, potlucks, backyard get-togethers, or holiday gatherings. Pretty much anytime you need a tasty dessert, this air fryer apple crisp is welcome!

This apple crisp will keep well in the refrigerator for up to three days in an air-tight container. So if you made more than people ate - which is highly unlikely - you don't have to worry.

For longer storage, you can freeze this crisp for up to three months in an air-tight, freezer-safe container. It makes it easy to make up several in advance to be served for weeknight desserts. Even easier!

Be aware that refrigerating this crisp will make the topping soft. It's best to reheat the crisp either in the oven or for a few minutes in the air fryer to get the topping close to its original, crispy state.

This is a super easy recipe, but there are a few things to note that might solve any issues you have with the recipe or questions you might have.

What apples work best with this air fryer apple crisp?
I love using Granny Smith apples. They're the classic baking apple for a reason, their crisp tartness works so well with the sweetness of the other ingredients. That being said, almost any crisp apple will work well.

Is it possible to make this a sugar-free recipe?
Absolutely! Products like Splenda and Truvia have brown sugar alternatives that give you all the sweetness you want with no actual sugar. That means that even people who have to limit their sugar can enjoy this recipe.

Can I use margarine instead of butter?
Absolutely. I prefer the texture that butter gives, but if you're watching your saturated fat, calories, or both, feel free to use margarine or another butter alternative, instead. The texture will be slightly different, but it will still be tasty!

I don't have quick oats. Can I use rolled oats?
You sure can. I like quick oats because their smaller size makes for a texture that I prefer, but for an even crispier, chewier topping, you can use regular oats.

I cooked my crisp for the recommended time. Why are my apples still firm?
The recommended time is a guide, not an absolute. If you find that the apples were too firm in your first batch of air fryer apple crisp, simply increase the cooking time to get them nice and soft. 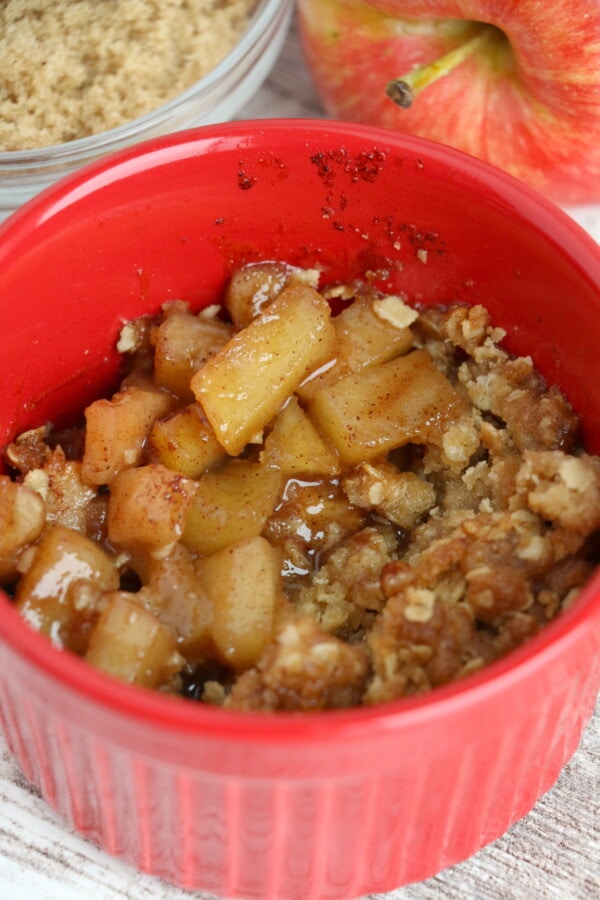 Give This Air Fryer Apple Crisp a Try

Whether you serve up this air fryer apple crisp for a weeknight dessert, a party, potluck, or holiday treat, it's always a welcome addition to any table.

With soft, sweet apples and a crumbly, crispy oat topping, this air fryer version of the classic apple crisp always leaves everyone hungry for more. AND it's so easy to make, you'll be happy to whip up a batch whenever you or your family gets a craving for it.

With such simple ingredients, a flavor everyone loves, and very little work, it's the perfect recipe for any time. Give it a try, and I'm sure you'll find yourself putting it into heavy rotation in your recipe list. 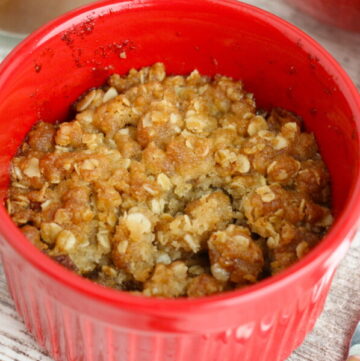 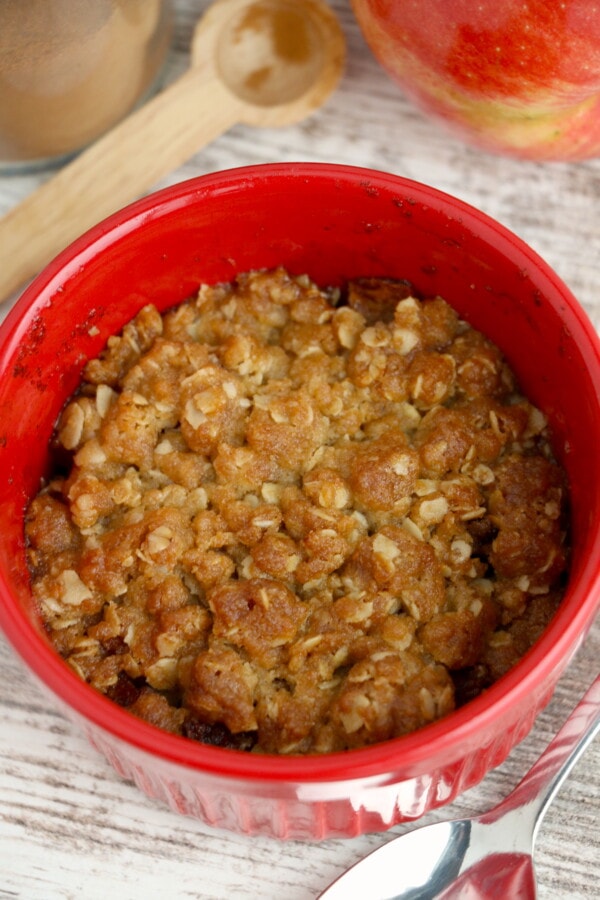