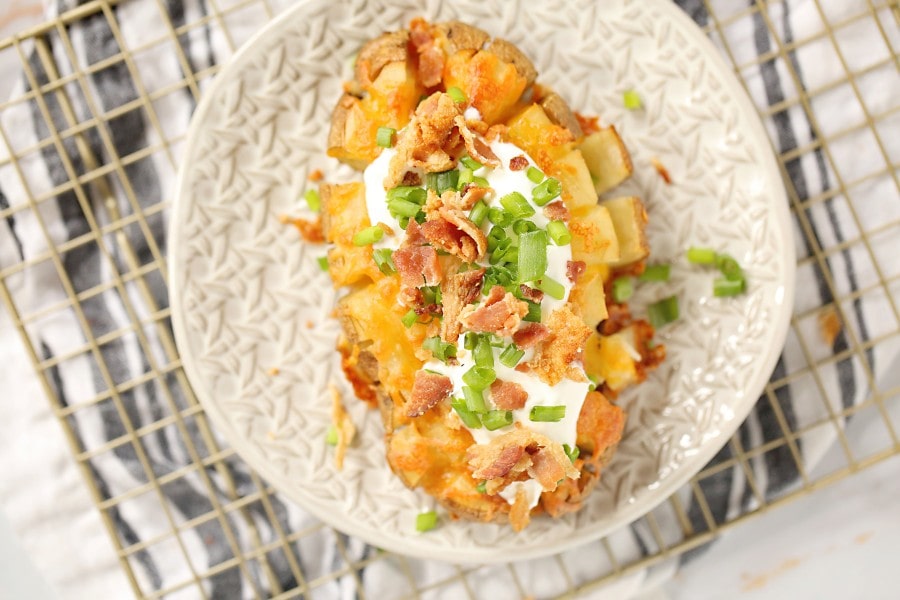 My son came home and described these potatoes as best he could. Said they were nothing special and I just thought how is that even possible?

He was describing a potato with cheese and bacon after all.

He totally got my attention though and almost immediately I began to experiment. I LOVE all things potatoes.

After several attempts, I placed these sliced baked potatoes in front of my son Patrick.

My version definitely changed his mind. These are the best oven baked potatoes. Just wait until you try them!

Although he didn’t say how delicious they were, he was holding up his empty plate looking for another one which totally said it all!

I knew I was on to something great.

This is one of the best oven baked potatoes I have ever tried. I suspect you’ll feel the exact same way after you give one a try.

There’s so many things you can do with potatoes. If you’re a fan of them, you have to put this recipe on your bucket list!

These are the best oven baked potatoes and I kid you not.

Like a flower blossom, the looks of these sliced baked potatoes are so pleasing to the eye. The way they come apart, makes them so much fun to eat.

This is one good looking potato, as the picture demonstrates, but as we all know, it’s the taste that really matters most.

Finish these potatoes off with all of your favorite baked potato toppings and you’re all set. Things like sour cream or a sour cream based dip, bacon, onions, cheese and so much more!

You’ve got oven baked sliced potatoes fit for a king or queen!

The list of potential toppings for sliced baked potatoes is really shocking. Just think of all of the possibilities!?

Your taste buds are going to thank you! These sliced baked potato blossoms are definitely worth the effort!

The key to making these sliced potatoes in the oven is using a sharp knife. Doing so can be a little tricky and potentially dangerous so as always, be careful.

Cutting yourself is a definite possibility so slicing must be done with care.

Your cuts don’t have to be perfect for these sliced potatoes to turn out great. Just do your best. I have never ever gotten a complaint about how perfect or I suppose imperfect my cuts were.

I haven’t had a potato not turn out yet. Sometimes these sliced baked potatoes look a little funny and on occasion I even break one in half. No matter what, these sliced potato blossoms taste amazing.

Taking the time to make the cuts is definitely worth the effort. These roasted sliced potatoes with baked on cheese become extra crispy and oh so good to eat.

Add your toppings and aim for a little of everything in every bite! That’s what we always do with this simple sliced potato recipe.

Making sliced potatoes in the oven with cheese baked right in tastes almost too good for words. Every time I make it, I’m always asked for the recipe.

Everyone always wants to know how to do it. How to make these roasted sliced potatoes.

Making the slices or cuts in the potato is super easy too. I’ll show you the easy technique.

There’s even a video for you to have a look at. As my husband says, a picture is worth a thousand words!

Regardless, here is how you cut each potato. Grab a cutting board and I’ll explain it as best I can!

First, slice the side off the long edge of the potato so on that side the potato will sit flat. Don’t remove a lot, or you’ll cut your potato in half.

You need to remove enough of the potato so you have the space to cut into the potato through that side.

Flip the potato over, so it is sitting flat on top of the cutting board.

Go as deep into the potato as you can, making sure your cuts don’t touch from the other side of the potato or you’ll cut your potato in half!

So, from the top of your potato press down to the bottom of the potato, right on to your cutting board until you make the cuts or slices all around the outer edge of the entire potato.

I hope this is making sense.

Flip the potato back over and carefully and gently pull the potato apart a little to separate the slices. Don’t pull too hard or the potato will snap and break apart.

You’re trying to make it possible to get some oil inside the cuts before baking these gorgeous sliced potatoes in your oven. That’s all. 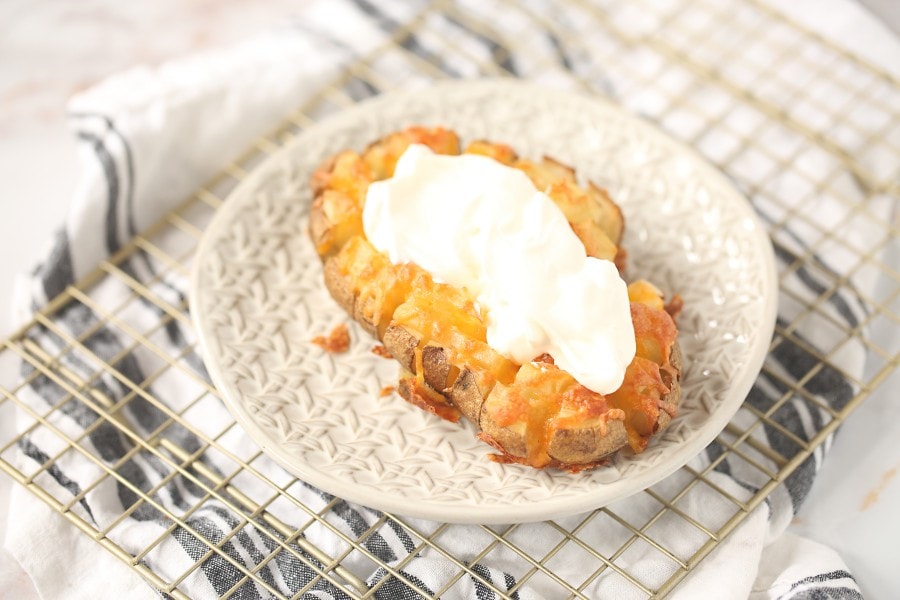 Now that you know how to create this wonderful sliced potato recipe, we need to discuss some of your options.

This sliced potato recipe can be made with any variety of potato you like. We are a potato family and overall we love all kinds of potatoes.

However generally, we use Russet or Idaho potatoes most often because we not only grow them in our garden but they’re the variety we usually grab and always have.

My parents and grandparents used those potatoes most too. That is likely why I’m such a huge fan of Russet potatoes and why I tend to gravitate towards them.

Don’t get me wrong, I love a wonderful Yukon Gold potato, especially when making mashed potatoes or red skinned potatoes. They’re amazing too.

We just seem to prefer the denser, flaky texture of a Russet or Idaho potato. Especially for this kind of recipe.

These oven baked potato slices are so similar to Hasselback potatoes which have been around forever! Have a look at our Fully Loaded Hasselback Potatoes.

If you’re a potato lover those are also definitely worth a try too.

The cool thing about roasted sliced potatoes is that they can be used as a delicious side dish or as a meal all by themselves.

This sliced potato recipe is wonderfully satisfying, eaten all by itself. At the same time, this is the perfect side dish to round out any meal.

Who doesn’t love potatoes with dinner after all?

A nice change from the average roasted potato, one thing I can say about these roasted sliced potatoes, they’re not boring!

So easy to make and without a doubt, it’s one of the best side dishes of all time.

Depending on how you enjoy your melted cheese, remember that you always have the option to broil the potatoes for a minute or two if desired.

Some prefer their cheese darker than others.

I also want to mention that these sliced potatoes are perfect for vegetarians too, if that is an issue. 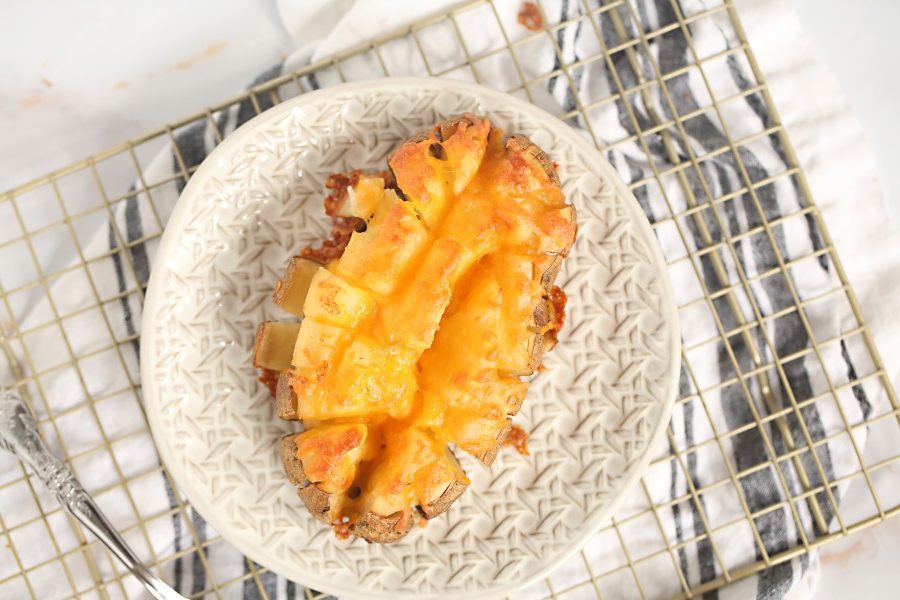 How to Make the Best Oven Baked Potatoes

Line a rimmed baking sheet or casserole dish with tin foil, for easy clean up. Set aside.

Wash and scrub potatoes. Dry with paper towel or a dry dish cloth.

Cut off a slice from the long side of your potato.

Using a small knife cut 3 or 4 ovals inside the exposed part of your potato.

Flip over and slice downwards around the entire edge of the potato about ½ to ¾ of an inch apart.

Turn potato back over and gently separate potato slightly so oil penetrates inside the slices.

Place potatoes on to prepared sheet or dish.

Coat potatoes with oil and salt. Drizzle the oil or use a brush. Do your best to get oil in between each slice in your potato.

Sprinkle with regular or seasoned salt.

Baking time will depend on the size of your potato. Potatoes are ready when the tops are brown and a toothpick is inserted in the biggest part of the potato and comes out easily.

In the meantime, dice or chop bacon (if using) and cook until crisp. Allow to drain on paper towel. Set aside.

After the allotted time, test one of the potatoes with a toothpick and if tender remove from the oven.

Taking a handful of shredded cheese, shove inside the deep holes on the top of each potato. Pile the cheese higher than the edges if you want it melted and dripping over the top of the potato.

Pack cheese in the hole but do not press too hard or the potato will split apart.

Place potatoes back in the oven and bake for 10 more minutes or until cheese is melted.

Remove potatoes from oven and add sour cream inside the hole and sprinkle with bacon and thinly sliced green onions.

Serve immediately and savor every bite! 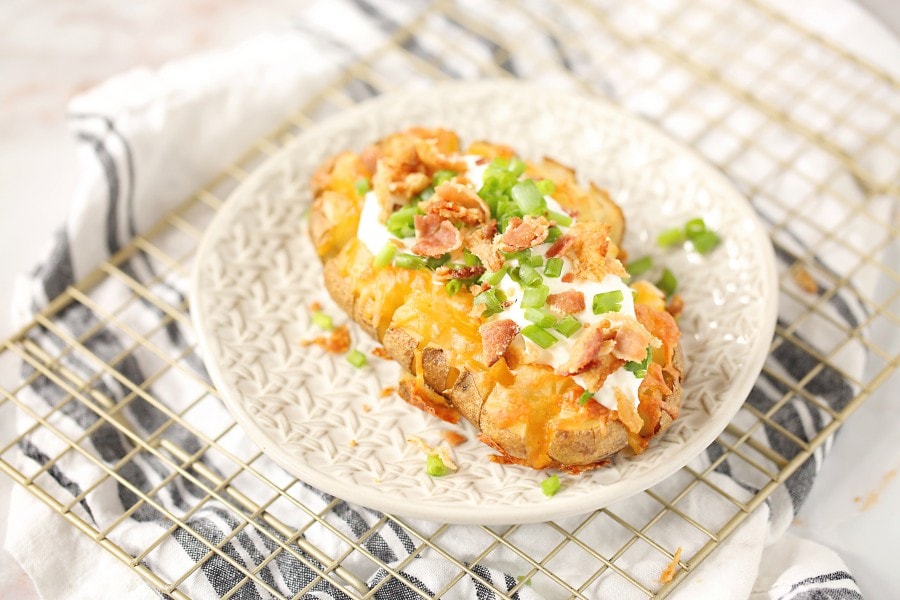 My adorable friend and food critic Renate adores these oven baked sliced potatoes especially with all the suggested toppings.

When I told her about these best potato recipes, she got excited and can hardly wait to give me her opinion on them. I’m looking forward to that!

What you have to say matters to me too. Please leave your opinion in my comment section on any and every recipe you try. I think this is a list of the best potato recipes around. 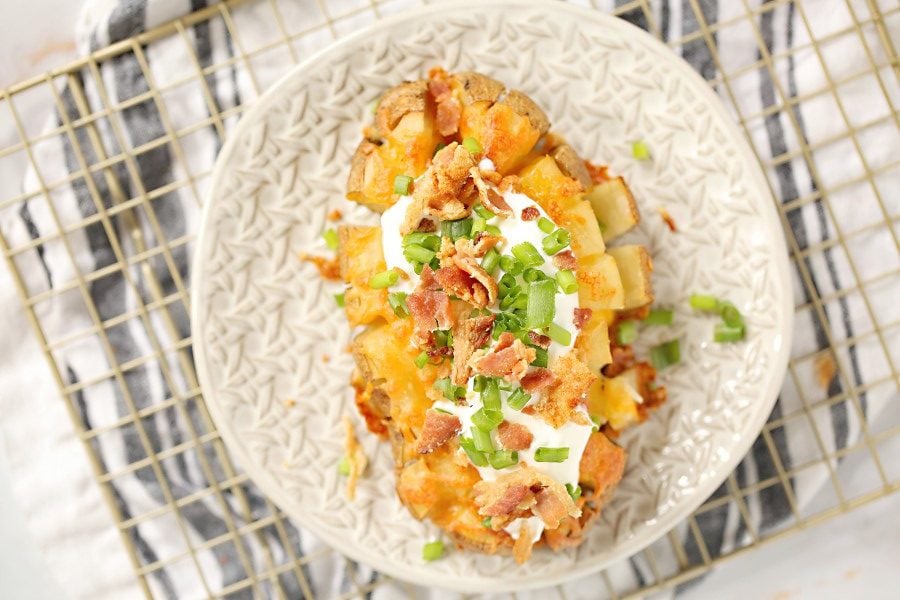 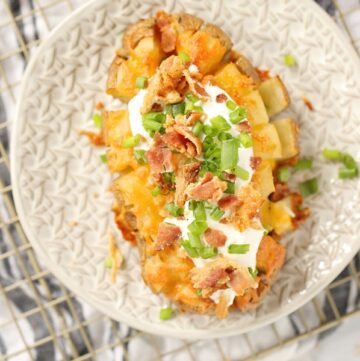 Keyword baked potato, best side dish, blossom, easy side dish, potato
Tried this recipe?Let us know how it was! 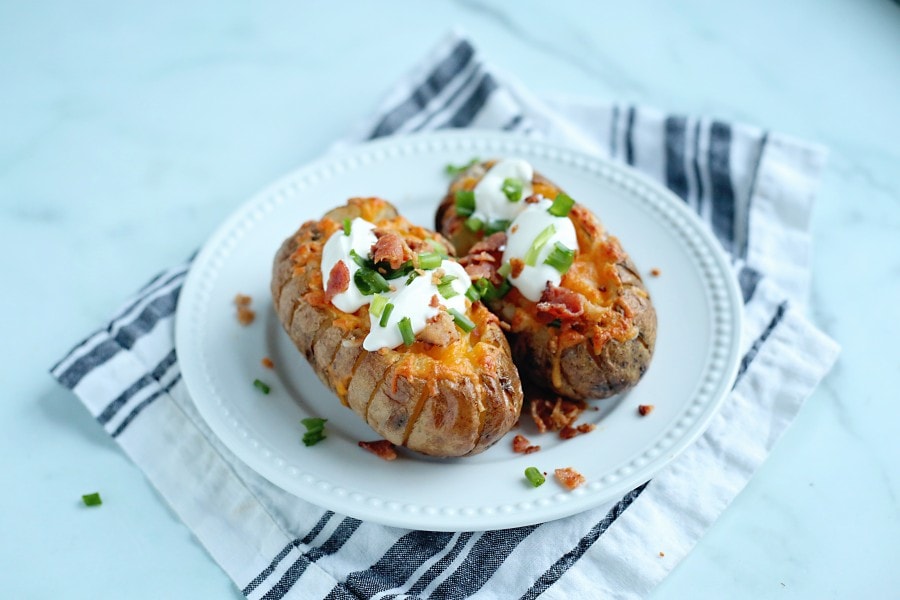