Fried Ice Cream Cake – Cinco de Mayo and more is the perfect summer dessert. Try this homemade ice cream cake recipe for yourself and see what I mean. I’m pretty sure you’re going to love it.

This Cinco De Mayo Fried Ice Cream Cake is the perfect way to enjoy a delicious, cool treat on a warm May day. This homemade ice cream cake recipe features rich, creamy ice cream topped with a crunchy topping that is absolutely full of flavor. It’s a tasty treat that is always a hit. 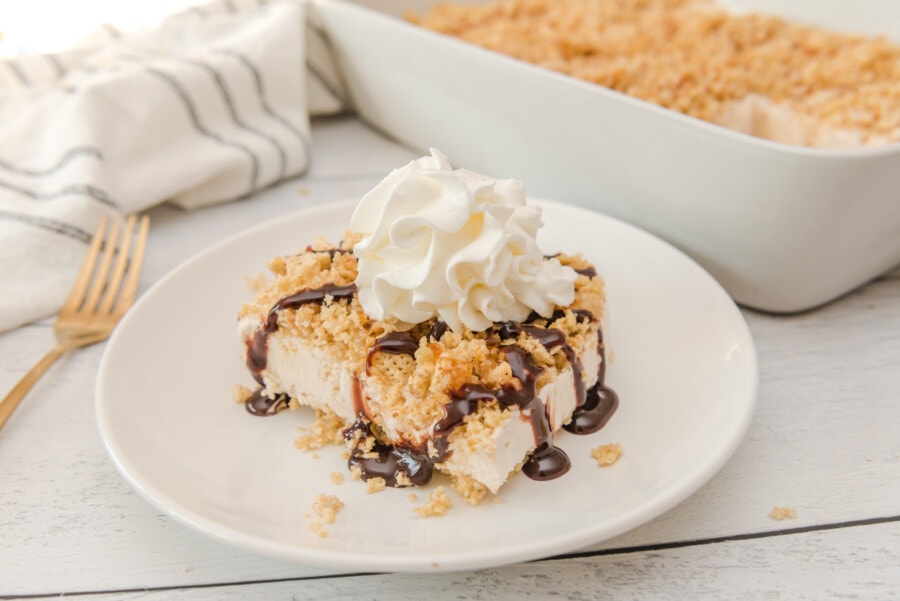 In honor of Cinco De Mayo, I was throwing a Taco party and this fried ice cream cake had to be part of it. After you review this recipe, it may not fit your definition of “fried ice cream”, but the flavors are there, and they speak for themselves!

More than just cake and ice cream, it’s got that deep-fried taste without the deep frying!

I love all things ice cream. All things cake. And all things chocolate. Put them all together and that spells “delicious” in my books! It’s crystal clear desserts are my kind “thing”, right? From the moment this cake hit my tongue, I was hooked forever!

The biggest takeaway is that this unique dessert is delightful, lovely, and so addictive! Sharing it with someone could be a challenge. And no one could blame you for that!

I once ate ¾ of a pan of it over the course of a day, one small piece at a time. It suddenly dawned on me how much I’d eaten. I’ll admit, I was a bit ashamed.

My husband and son got home just in time or there wouldn’t have been any for them!  The fact there was a piece left for each of them was the saving grace.

But eating this ice cream cake was sheer delight from the first bite to the last.

What became a dessert-for-one party, became a fried ice cream cake dessert for everyone all year long! The demand was there, and it always gets high praises.

The only comments I got were not to wait for the next Cinco De Mayo celebration to make it. So I make it often, because it’s got to be one of the best so called “fried” ice cream cake desserts out there! 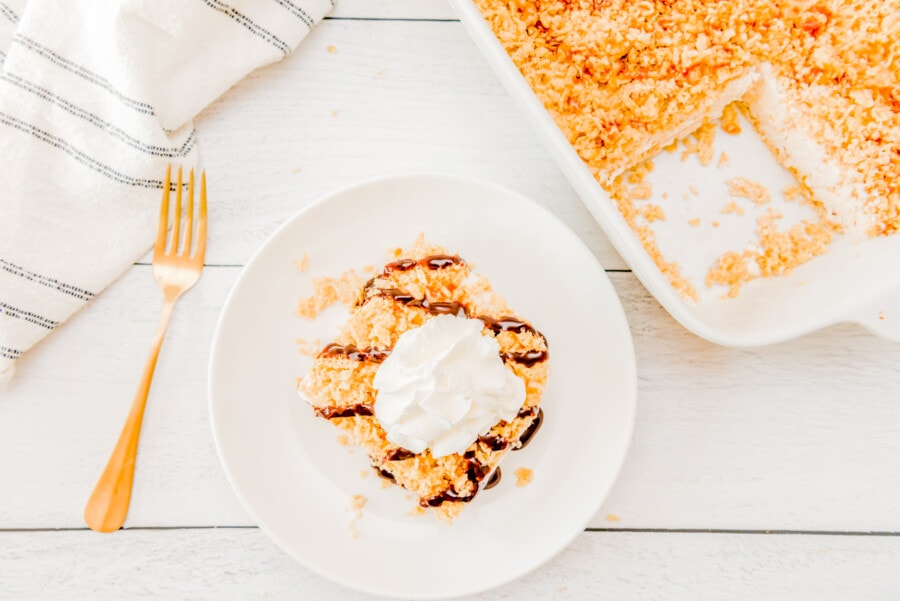 Without these two inspirations for this cake, we’d never have had it. Let’s take a quick look at the history of both fried ice cream and ice cream cakes.

When people think of ice cream cake, they generally think of Baskin Robbins and Dairy Queen, the two big names in commercially available ice cream cakes. However, ice cream cake has been around for a lot longer than that.

We don’t know exactly when or how ice cream cake came to be, but most food historians believe that it originated in England in the 1700s. It was a treat for wealthy lords and ladies who could afford such a dessert without modern appliances like refrigerators or freezers.

In the 19th century, ice cream cake, then called bombes, saw an increase in popularity among the wealthy Victorian-era elite.

These bombes were made of ice cream and fruit in decorative molds. Oftentimes, they also featured a lining of cake or biscuits. As time went on, ice cream cakes began to take a more “cake” form, with ice cream cake recipes being found as far back as the 1870s.

After World War I, ice cream cakes became more popular due to more widespread access to refrigerators and freezers.

Fast forward to the modern era, and chains like Baskin Robbins and Dairy Queen began to offer delicious frozen cakes for sale.

These days, recipes like this fried ice cream cake and other homemade ice cream cake recipes have become commonplace, making appearances at all sorts of warm-weather get-togethers.

Fried ice cream is an even newer creation than ice cream cake, but although it’s thought to have been created in the 1890s, the mystery of this deep-fried dessert is just as murky as the one surrounding ice cream cake.

There are three different stories surrounding the origin of fried ice cream. Some believe that it was first served during the 1893 Chicago World’s Fair, incidentally, also the birthplace of the ice cream sundae.

Another claim is that a Philadelphia company created fried ice cream. In 1894, a frozen treat described as “A small, solid cake of ice cream enveloped in a thin sheet of pie crust and then dipping into boiling lard or butter to cook the outside to a crisp”.

The takeaway here is that we will never know for sure! 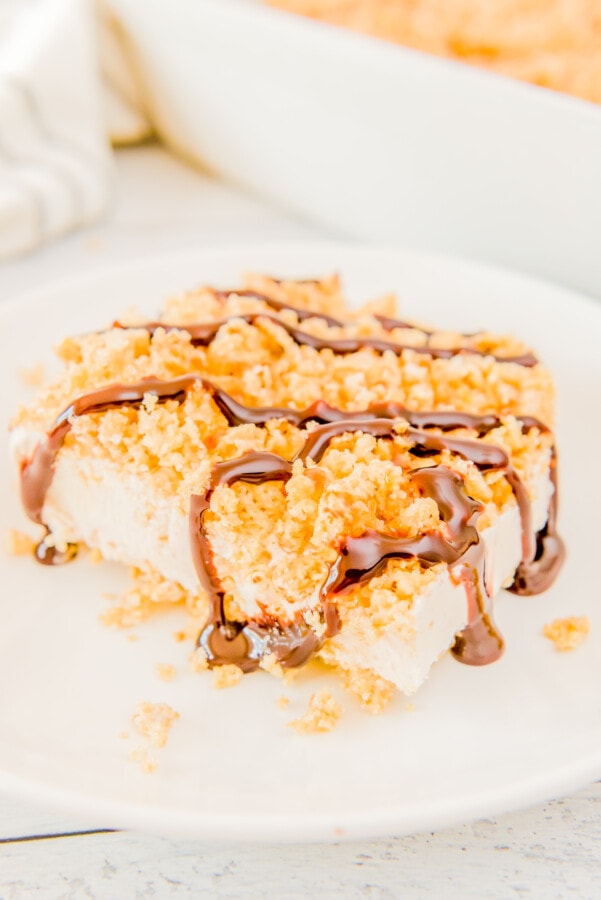 If you’re having a taco party or any kind of gathering, keep this Mexican fried ice cream cake recipe in mind. It’s sure to be a big hit and there’s no deep frying required!

Simple ingredients are listed below to get you started on this cake. This ice cream cake recipe takes very little time to put together. The hardest part is waiting for it to firm up in the freezer! A little patience is all that’s required and the rewards will be worth it.

This combination of ingredients makes for the perfect dessert, no matter what the occasion is! A fried ice cream dessert recipe so simple to whip up, you’ll wonder why you didn’t discover it sooner!

How easy is it to make ice cream cake taste like it’s fried? This recipe will show you just how easy it is. If you’ve ever ordered fried ice cream cake in a Mexican restaurant, then here’s your chance to compare.

The flavor of this fried ice cream is like no other. Chex or Corn Flakes with that little bit of honey, makes this dessert, light, creamy, sticky and crunchy. It’s a whole lot of goodness all rolled into one!

If it’s available to you I urge you to try it at least once. Otherwise you can enjoy it the way we did for years with original Chex cereal or Corn Flakes!

Pack down the cereal mixture well

Press Chex or crushed Corn Flake mixture into the bottom of your pan, as the crust is what’s going to make it strong enough to hold up the rest of those delicious ingredients.

A combination of crunchy cereal and sugar pressed down real tight, creates quite a yummy base with the remaining Corn Flake mixture, or Chex, all over the top.

As Chex or Corn Flake mixture freezes with the ice cream, the crunch factor is even more enhanced! You’re going to LOVE this cake as much as we do. Just you wait and see.

Pop it in the freezer

The biggest kicker is that it needs to sit in the freezer for at least 6 hours to set. I know – the waiting is so hard! But if you want that gorgeous frozen texture and flavor, freezing it for 6 hours or overnight is an absolute must.

Use a firm knife to cut into the frozen cake

This cake really firms up fast, so use a sharp knife for slicing. Run it under hot water and wipe with a towel before each slice. Do your best to cut the pieces evenly. Although you might want to cut yourself a bigger slice! Just saying. 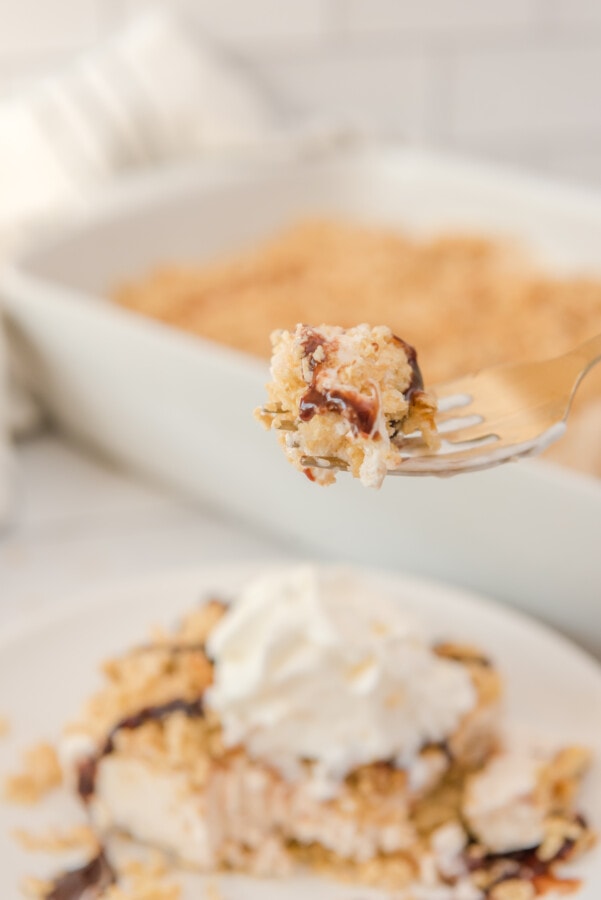 Instead of using your fingers to push down the bottom layer to make the crust, use the back of a spatula as an alternative. Push down several times to make it as packed and as flat as possible.

Make sure the ice cream and whipped cream is mixed together really well, so there are no lumps. A silky, smooth texture is the name of the game.

Again, it needs to be nice and level or as level as possible. Ice cream cakes are an imperfect science! 😉

Can you use a different flavor of ice cream for this homemade ice cream cake recipe?

For sure! Change it up with different flavors, while still maintaining that same great texture. Chocolate ice cream is one of my favorites, but there are dozens more.

Different colored ice creams can change the look of this dessert and make it more fun too. So go ahead. Try something new!

How do you store ice cream cake?

The last thing you need is freezer-burnt cake! That would be very disappointing. Store ice cream cake in a container with a lid in the freezer and there won’t be any issues.

If you haven’t figured it out by now, I ADORE toppings! And trying different kinds is what I love to do!

What’s awesome about various types of toppings is that they can really change up the taste of this homemade ice cream cake recipe!

Some simple topping ideas include:

And that’s just a start. Why not add a sprinkle of chopped nuts?

Every time you slice a piece, try a new and fun topping. Each slice would be like a different dessert. How cool is that? (Pardon the pun)!😉 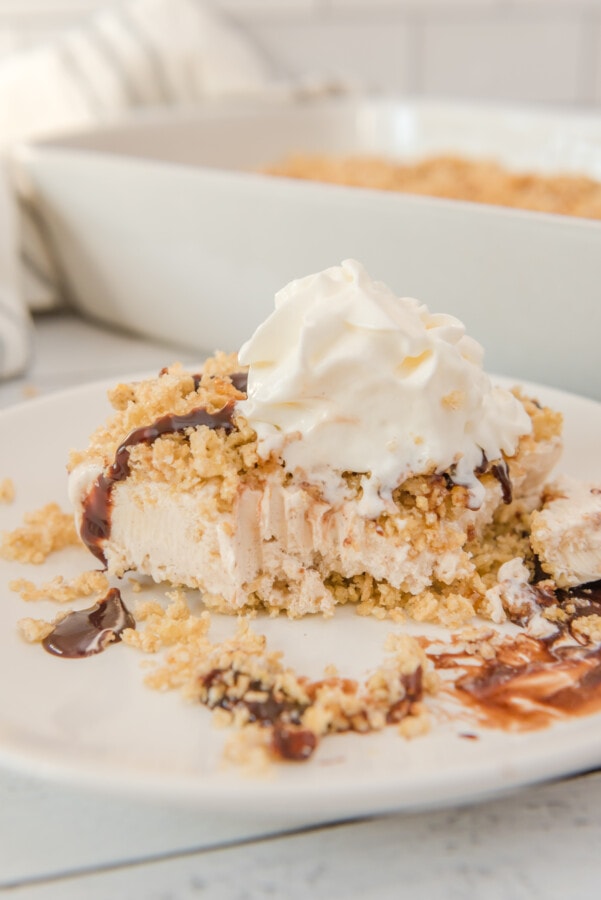 They say there’s a time and place, a reason, and a season for everything. This recipe is an exception in that it can be made in no time, in the comfort of your own home, and you don’t need a reason or a season to make it!

An ideal treat for a fun get-together with family and friends on a hot summer day. Or any time you’ve got a hankering for something cool and crunchy. 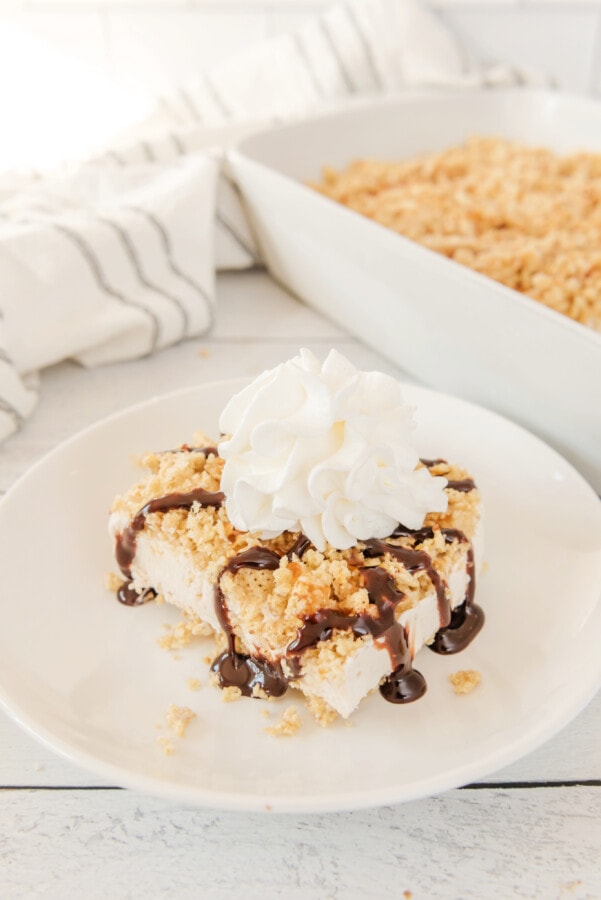 Speaking of treats, here are a few more treasures for adults and kids alike:

See you next time! 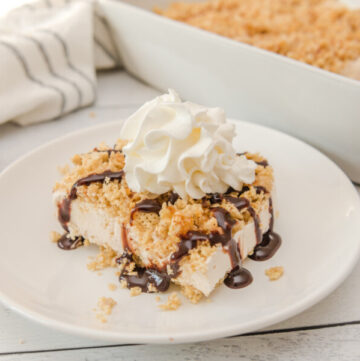 For serving, if desired

I have used Cinnamon Chex cereal to make this recipe and omitted the cinnamon and Honey Nut Chex cereal as well and used cinnamon. I will now use the Cinnamon Chex Cereal now at every opportunity. If it's available to you I urge you to try it at least once. Otherwise you can enjoy it the way we did for years with original Chex cereal or Corn Flakes!
Keyword cinqo de mayo, fried ice cream cake, ice cream cake
Tried this recipe?Let us know how it was! 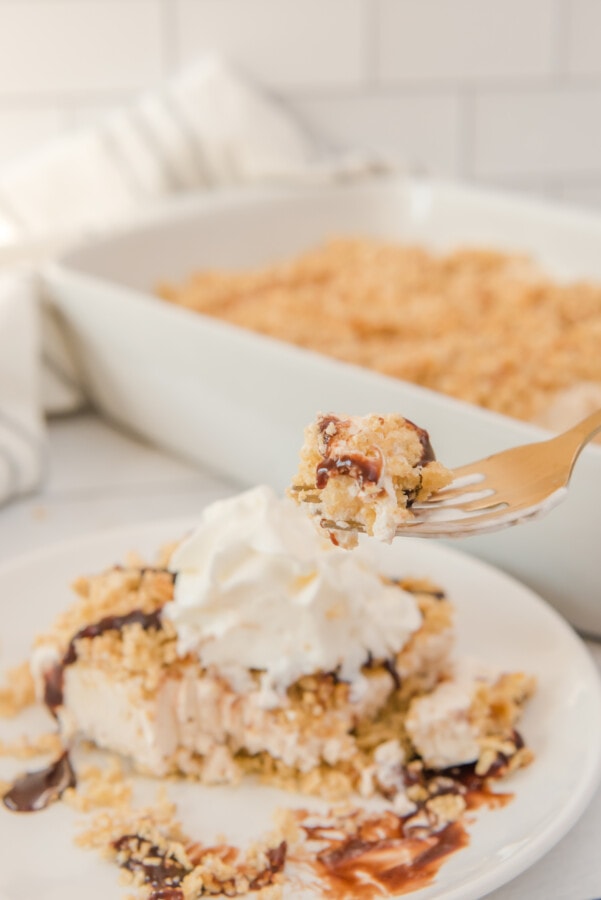