Orange Julius popsicles are the perfect frozen treat on a hot day. This delicious orange creamsicle variation will leave everyone satisfied.

Orange Julius popsicles are the best way to enjoy the flavor of that classic food court treat and beat the summer heat. This delicious take on an orange dreamsicle is rich, creamy, and full of that super tasty orange flavor we all love about Orange Julius.

It's the perfect summer cool down snack! 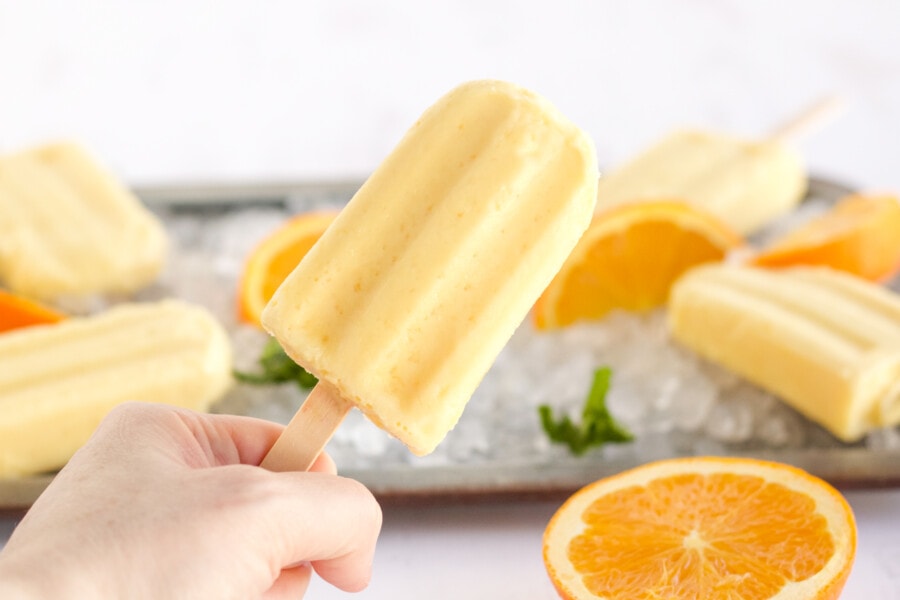 Today I am all about that creamy citrus blend you get with a distinctively delicious Orange Julius. I found the key to transforming a time-honored and iconic treat into smooth silky orange popsicles perfect for a hot summer day.

Orange Julius popsicles are a must to have in your freezer as the temperature rises throughout the season. Here's some background about this fantastic citrus beverage made from orange juice concentrate and how you can enjoy it frozen.

Orange Julius and its signature orange drink are a favorite of almost every family who's ever visited a mall in North America. This rich, creamy orange drink is so satisfyingly sweet and smooth.

In fact, I think it might be some kind of law, and if it isn't it should be!

When you add that to having anything frozen on a stick in the summer months, you have a recipe for one of the most satisfyingly refreshing summer treats you'll ever make.

The thing is, without both the Orange Julius and the popsicle, we wouldn't be able to enjoy this delicious recipe idea that I had. So how did we get here?

It's strange for me to think that anybody would not know what an Orange Julius is. But I guess shopping malls don't enjoy the popularity they once did. So, it makes sense that would-be shoppers could miss this mall snack staple.

Especially, since more people than ever have stayed away from large gatherings f any kind thanks to last year's pandemic. The silver lining here is that maybe emerging customers might return to their local malls to pay homage once the health threat has been neutralized.

I know we're all anxious to get out from behind our computers and do some real shopping. For that, you need an Orange Julius.

Orange Julius is a food and beverage stand that's actually been around for nearly 100 years. You'll usually find it at the mall food court. Sometimes it's a stand-alone store or a kiosk.

If your lucky you come across one on your regular route between the stores you typically like to shop. Otherwise, you have to drag yourself all the way across the mall (hopefully not changing floors, with all your shopping bags in tow.

All of that being said, where the heck did it come from? It's an interesting story, actually.

The drink comes from an orange juice stand that was opened in Los Angeles in 1926 by Julius Freed. It was a mix of orange juice, sweetener, milk, and vanilla.

It was actually developed by Freed's real estate broker who concocted it to make the acidity of orange juice easier on his stomach. Freed, liked the drink so much when he tried it that he began selling it at his stand, albeit with a frothier, creamier texture.

Its popularity took off and by the 50s and 60s, Orange Julius was sold in outlets all over the country ranging from state and county fairs to freestanding kiosks.

In 1967, it was sold to the corporation that owns IHOP, It was during this time that the marketing wizards made the brand explode, landing it in almost every mall across the country over a period of a few years.

Frozen treats have been around for since time out of mind. As far back as ancient Rome, slaves were sent to retrieve blocks of ice from the mountains which were then crushed and served with fruit and spice syrup.

Famed explorer, Marco Polo, was introduced to sorbet when he traveled to China, visiting the court of Kublai Khan.

In that year, a boy named Frank Epperson who lived in Oakland, California accidentally left a glass filled with water, powdered soda mix, and a wooden stir stick outside overnight. It was a cold night, and the mixture froze.

The next day with Frank found it, he ran the glass under hot water and removed the frozen block with the wooden handle. After that first mistake, he knew he'd made something great and began making the pops for his friends.

Later, after he'd grown up and started a family, he made them for his kids.

Epperson filed for a patent on his creation in 1923. For years, he'd called them Eppsicles, but his children demanded that the name be changed to Pop's 'sicles. It stuck, changed a bit over time, and today, we call these frozen treats popsicles.

Epperson partnered with Joe Lowe Co., which allowed for broad distribution of popsicles, and they became an immediate hit, being popular treats at amusement parks, fairs, and the like.

Fast forward to today, and there are more popsicle flavors, shapes, and varieties than you can shake a stick at. This brings us to this new popsicle creation - Orange Julius popsicles. 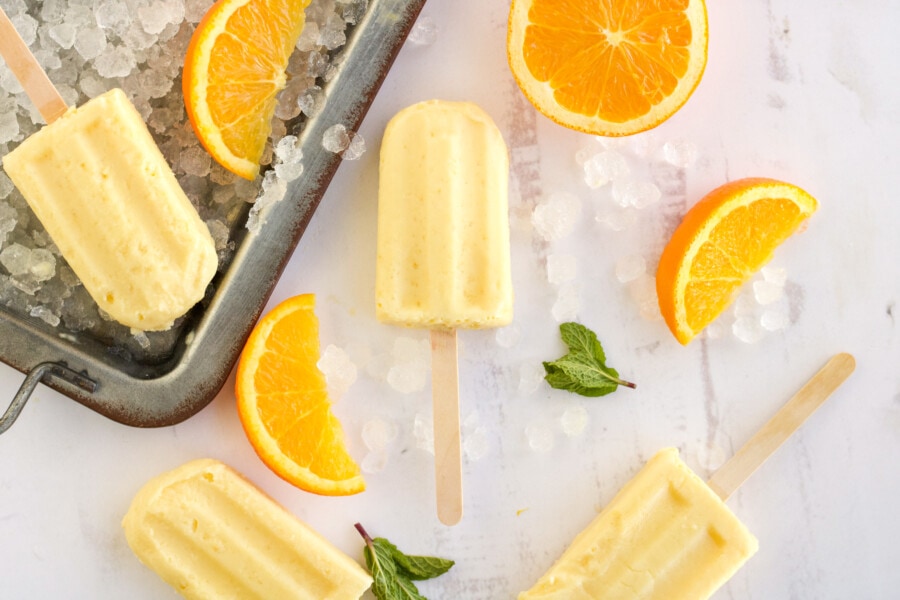 How to Make Orange Julius at Home

We all love orange and vanilla together. Think of your old-fashioned orange cream soda or a classic 50/50 bar. If all of that sounds like Greek, then you are missing out on one of the best partnerships in flavor since peanut butter and chocolate.

Orange Julius is like the original smoothie. In fact, it was the original. I only say like because blenders weren't actually invented until the 1930s after Orange Julius's were invented by Julius Freed.

Although the smoothie as we know it today was popularized in the 1970s, Its roots go back to the Orange Julius which is made with Orange juice concentrate and then tempered with milk vanilla, and ice to make it less acidic and more palatable for sensitive stomachs, which Freed himself suffered from.

To make an Orange Julius at home all you need are these basic ingredients. Simply blend them together. To make a drinkable Orange Julius, simply follow my recipe for the Orange Julius Popsicles but leave out the yogurt.

Skip the step about pouring it into molds. Once you blend it, it's done. Just make sure you have some straws handy.

What is Orange Juice Concentrate?

You may have noticed that Orange Julius is made with orange juice concentrate. Lots of people hear concentrate and assume that the orange juice is not good for you, or even bad.

That's not the case at all, and the concentrated form is so important to delivering the right flavor and texture to this particular recipe. It's always been made that way and it's so distinctive that it's very important to get that right if you want to nail the flavor.

Orange juice concentrate is not worse for you than fresh-squeezed orange juice. It might taste different, but that's about it. Additives are often placed in juices made from concentrate, but those additives tend to have more health benefits than otherwise.

This results in the concentrate, which you must then add water to again in order to restore it to its juice form. There's nothing wrong with it and it costs less because it's less expensive to ship. 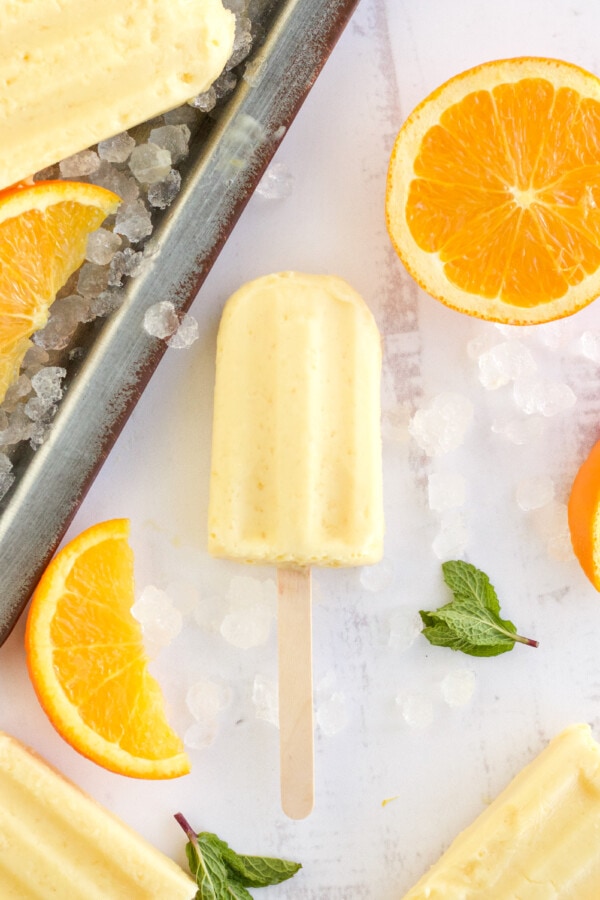 How to Make Orange Juice Concentrate

The great thing about orange juice concentrate is how easy it is to buy. It's way more time-consuming and expensive to make your own concentrate at home.

However, lots of people ask how you can do it. There are two basic ways that you can do it if you are up to the challenge. The first way is to heat the orange juice and let it reduce as the water streams out of it. You'll get a thick syrup, which you can then freeze for later.

The other way to get concentrate from regular juice is to freeze it in a bottle and then turn that bottle upside down. As the juice melts and drips the concentrate will come out first.

The ice takes longer to melt so let the juice come out and then stop the process as the drips lose their orange color. Repeat this method again to develop a finer concentrate. 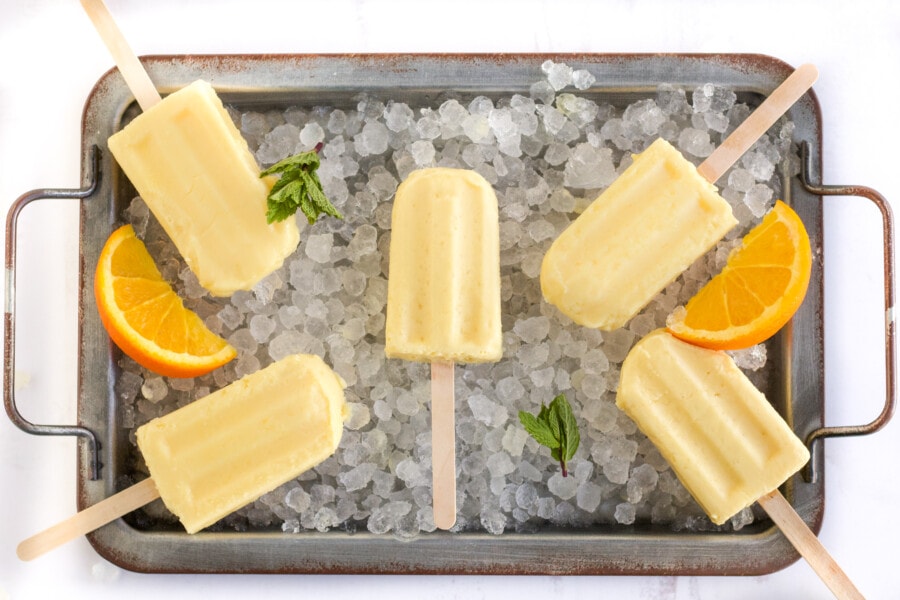 How to Make Orange Julius Popsicles

The process of turning a delicious Orange Julius into an orange popsicle is easy. Just add some yogurt to the Julius mixture and pour it into your favorite popsicle molds.

Molds range in price from under $10 to about $25 and come in various sizes. Have a look and find the mold perfect for you.

This recipe is easy, fun, and a total burst of nostalgia if you haven't enjoyed one of these frozen treats in a while! It's a great take on the classic orange creamsicle! 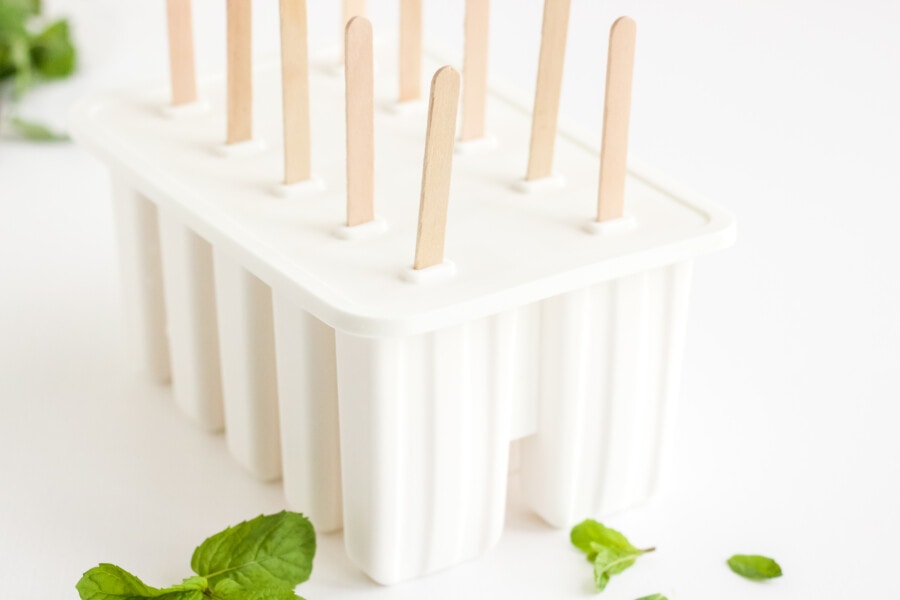 It only takes a few ingredients to make this delicious orange creamsicle treat. The best part is that you'll have every ingredient you need to make these treats in your kitchen already!

See? Easy, right? Every ingredient needed to make these popsicles are simply breakfast beverages or foods that you probably already have on hand, making this one heck of an easy recipe that tastes absolutely amazing. It doesn't get much easier.

Making these super easy Orange Julius popsicles is just as simple as the ingredient list. All you'll be doing is throwing them into a blender, mixing them, and freezing. That's it. There's really nothing to it at all! Here's what you do.

See? Nothing to it. It's one of the easiest recipes you'll ever make, and it's also one of the tastiest. I mean a recipe that's just blending and freezing? Come on now. Winner winner popsicle dinner. Hey, I'm not judging. 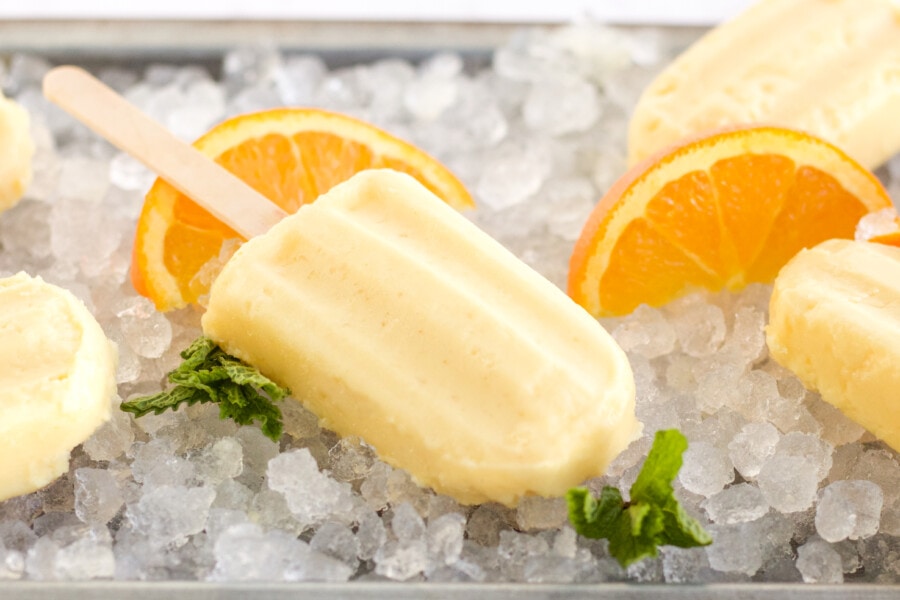 And the easy train just keeps on rolling. To serve this delicious orange creamsicle popsicles recipe variation, just pull one out of the freezer on a hot day, and hand it to your loved one. That's all there is to it.

I know I keep saying this, but it doesn't get much easier than this. These are orange popsicles, so storing them is simply keeping them in the freezer. They'll be good for months. Of course, they probably won't last that long! 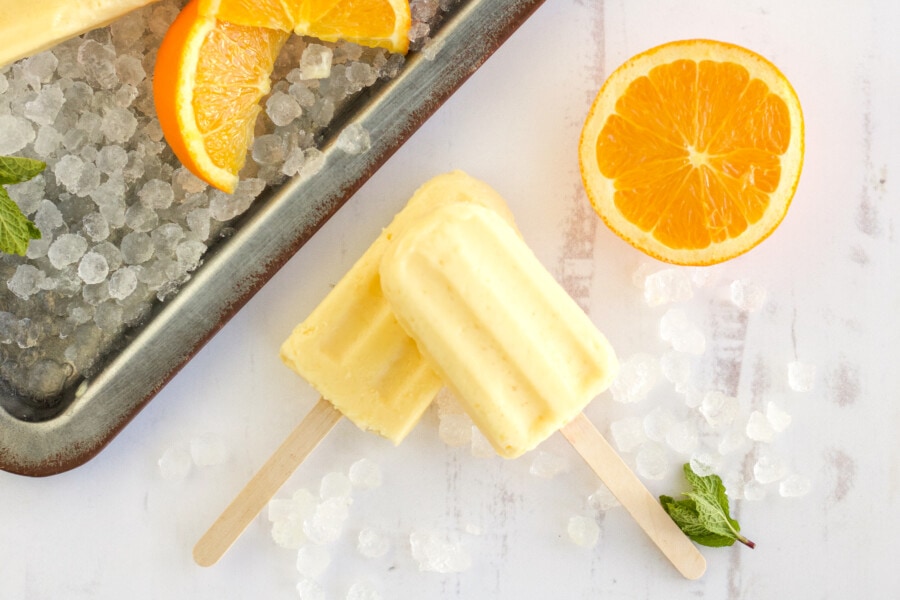 Give These Orange Julius Popsicles a Try

This orange creamsicle recipe is so easy to make and so delicious, there's no reason not to give it a try. On a blazing hot summer day, Orange Julius popsicles are the perfect way for you and your friends and family to cool off and feel refreshed with one of the tastiest frozen treats you'll ever eat.

So break out the blender, crack open the fridge and get ready to blend up a refreshing orange frozen treat that everyone will love. These orange popsicles are the perfect thing for hot summer days, backyard barbecues, and any get-together that requires some tasty, cool refreshment. 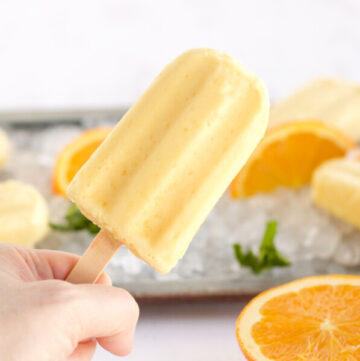 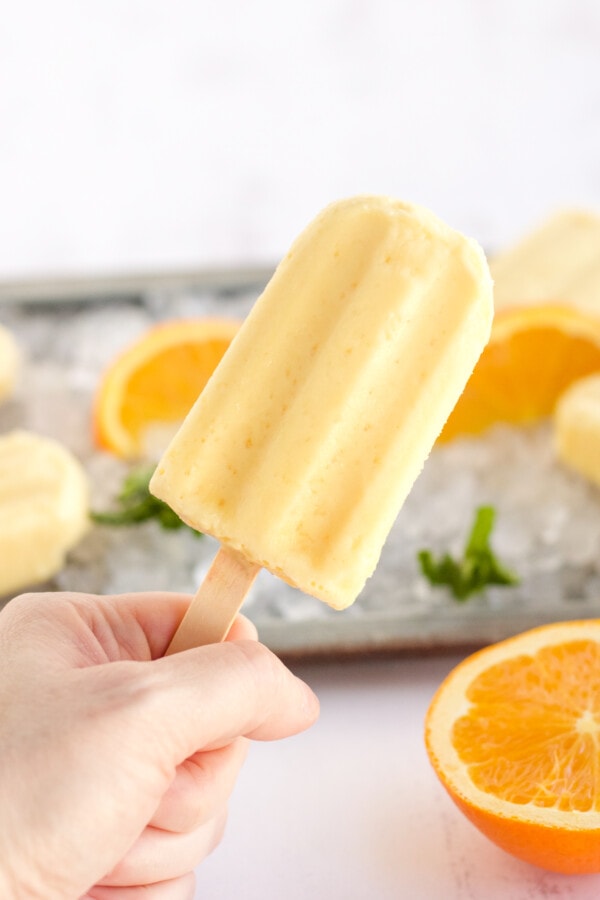