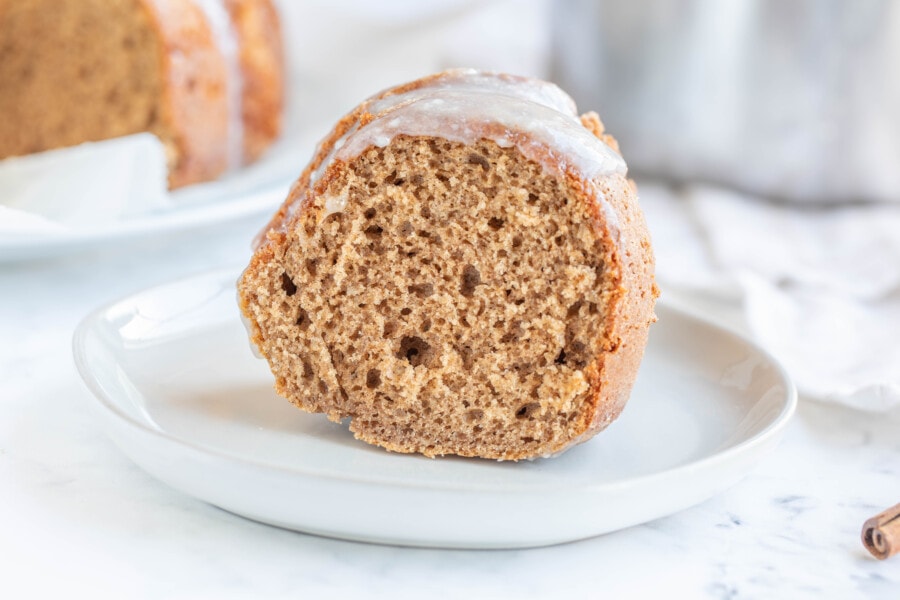 This recipe has two options, I just couldn’t help it! Truth is, I can’t decide which Bundt cake I prefer. The one with just ground cinnamon and cream cheese glaze or the one with pumpkin pie spice. They’re both so delicious.

I debated over making two separate posts for this fabulous Bundt cake. However, the recipe is exactly the same except for the spice so here it is, one beautiful Bundt cake recipe with a few different options for you.

As many of you know, the more options the better I always say.

Pumpkin pie spice is usually made up of cinnamon, nutmeg, ginger and allspice. The flavors are similar but at the end of the day they are so different.

In a totally delicious way.

If you enjoy cinnamon as much as I do you will LOVE this cake. Just the perfect amount of cinnamon flavor.

I have been known to start my day with a hot beverage and a wonderful slice of cinnamon roll Bundt cake.

Even for breakfast or brunch. Yep I said it. I can imagine the look on my mother’s face if I mentioned to her that I love cake for breakfast.

Once I gave her a slice I knew she’d understand and join me with a huge smile on her face. She would have loved this super moist, soft and fluffy cinnamon Bundt cake.

I look at it like I’ll make whichever version I’m really in the mood for.

This easy cinnamon cake recipe (or pumpkin spice Bundt) is light and wonderful. Prepare the batter from scratch and bake in a Bundt pan for a beautiful presentation.

Cinnamon is one of my most favorite smells, so when I first made this cinnamon Bundt cake recipe I already knew how much I would love it. 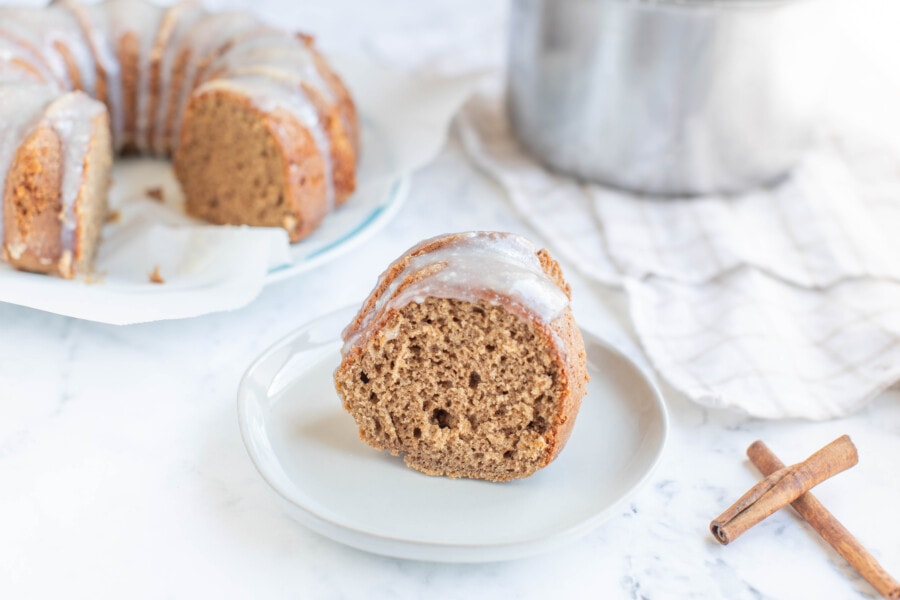 As the name suggests, this cinnamon roll Bundt cake is a simple cake. It does have a cinnamon syrup glaze, but no frosting, no layers, no mix-ins.

It’s light and wonderful. Perfect for a brunch or Easter!

Cinnamon honey butter and this cinnamon roll quick bread also make me weak in the knees!

How to Make an Easy Cinnamon or Pumpkin Spice Bundt Cake

Preheat your oven to 350 degrees. Flour and grease a 10-inch Bundt pan.

In a separate mixing bowl, add butter and granulated sugar.

Beat with an electric hand mixer until light and fluffy.

Then beat in brown sugar.

Beat in eggs one at a time.

Bake for 37 to 40 minutes or until a toothpick comes out clean.

While the cake is baking, prepare the glaze. 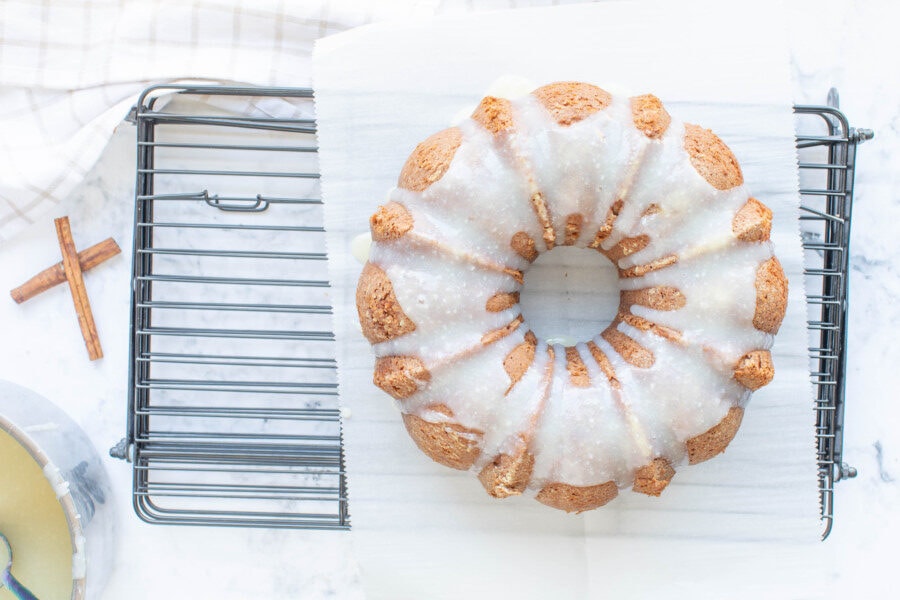 How to Make Cream Cheese Glaze

Heat for three to four minutes, whisking frequently until cream cheese has fully melted. Then set aside.

Allow the cake to cool in the pan for 15 minutes, then with a rubber spatula release the cake from the pan by gently removing the edges with the spatula.

Then, move the cake to a parchment-paper covered cooling rack.

Set the cake on a serving plate or platter.

Poke holes with a fork all over before drizzling with glaze.

Pour cream cheese glaze all over the top. 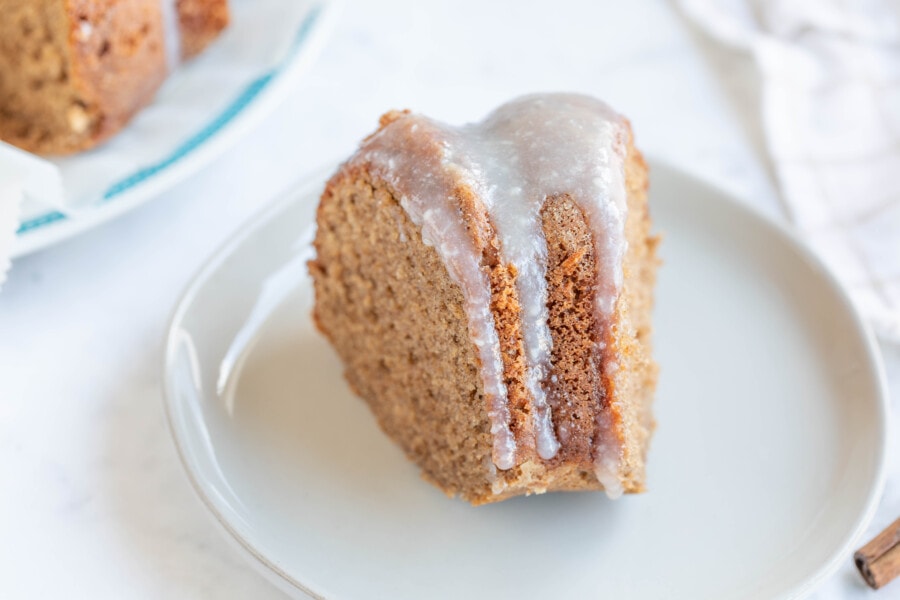 Occasionally, I will throw in some apples into the cinnamon Bundt cake and totally cover it in an apple cider glaze or a dusting of powdered sugar. Yum! You can do this with toasted pecans or walnuts, or without.

This variation on the traditional cinnamon Bundt cake is heavenly and such a nice change. Every slice is total comfort.

You can also add ⅔ cup chopped toasted walnuts or pecans too.

How to Make Cider Glaze

You can always add a crumble topping to your cinnamon roll Bundt cake, or drizzle it with simple syrup.

Here’s what you need to make a cider glaze:

Whisk together confectioners’ sugar and cider. Drizzle over top of cake, letting it drip down the sides.

How to Store your Cinnamon Bundt Cake

Leftover cake that has been sliced should be tightly covered in plastic wrap. It can sit on the countertop at room temperature for three days, including the day you made it.

Longer than that, it will need to be refrigerated and can be stored for up to one week. Just remember to unwrap the cinnamon Bundt cake and bring it to room temperature before serving.

You can extend the Bundt cake’s life even longer in the freezer.

Wrap the cake tightly with plastic freezer wrap and aluminum foil. Properly stored, it will maintain best quality for about two months. Thaw in the refrigerator overnight and bring to room temperature before serving.

What is a Bundt Cake?

This may seem too simple to be true, but a Bundt cake is a cake that’s baked in a Bundt pan. It has a distinct donut shape but isn’t associated with any specific recipe. It’s all about the shape.

Do you have to use a Bundt pan?

No, but yes. The fluted shape of the Bundt pan allows for an even distribution of heat, and the hole in the middle of the pan allows air and heat to rise through the center of the cake. This is important when baking dense batters like pound cake or coffee cake, because they take longer to cook. If you’re baking a dense cake and use a regular round cake pan, your easy cinnamon or pumpkin spice Bundt cake might not cook in the center, or could burn at the edges.

For a visual, check out these Bundt pans from Nordic Ware.

The main difference between a frosting and cream cheese glaze recipe isn’t the ingredients. Glaze is simply a thinner version of frosting. You obtain the glaze consistency by adding liquid.

No, cream cheese glaze doesn’t harden. This is good to know when baking goods you may want to stack and store. However, it’s excellent on cinnamon bundt cake since you won’t be stacking that!

Want more Bundt in your life? Try these great recipes! 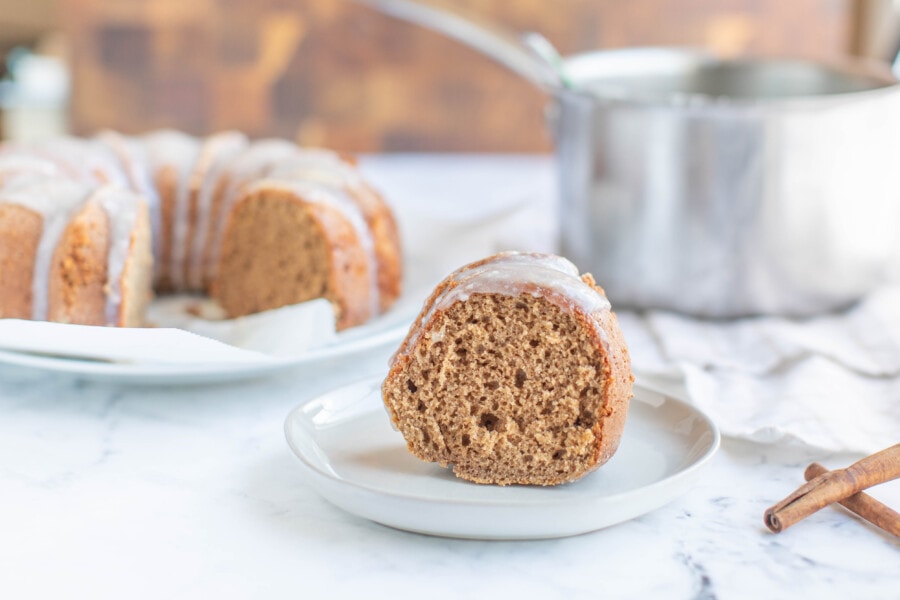 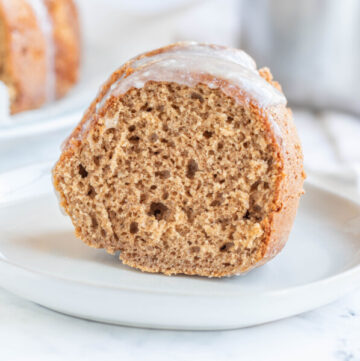