Air fryer cinnamon rolls cook up so light, fluffy, and delicious! A simple homemade dough with butter, cinnamon, and sugar is rolled up and sliced to create the perfect sweet breakfast treat that everyone will love!

The air fryer cooks everything up much more quickly than the oven thanks to circulating air and it's one of my favorite kitchen tools for just that reason. I love making these cinnamon rolls in the air fryer for brunch events or even just a decadent treat for a weekend breakfast.

This was inspired by another cinnamon roll recipe on Kitchen Divas, and pairs well with this amazing coffee recipe. More easy, sweet air fryer recipes I think you will like are this Air Fryer Lava Cake recipe and these rich, fudgy Air Fryer Turtle Brownies.

If you also enjoy savory foods in pastry to cook in your air fryer you might also like these Mini Chicken Cordon Bleu Croissants and these Air Fryer Buffalo Chicken Egg Rolls.

I know the list looks long, but don't worry these homemade cinnamon rolls using the air fryer are made with easy-to-find ingredients, many of which you may already have on hand.

See the recipe card further down on the page for the exact quantities of each ingredient.

Here is an overview of making air fryer cinnamon rolls. You will find step-by-step images in the recipe card so you can follow along as you make homemade cinnamon rolls air fryer.

In a large bowl microwave-safe bowl, mix milk, water, and butter together.

Microwave on high just until butter is melted and the mixture is warm.

Add the flour, sugar, salt, yeast, and egg to the wet ingredients. Use a stand mixer or your hands to mix together until a uniform dough forms.

Step 2: Knead and Rest the Dough

Transfer the dough to a floured work surface and continue working the dough with your hands for about 2-3 minutes.

Spray a bowl with non-stick cooking spray and place the ball of dough inside.

Cover the bowl loosely with a towel and allow to rest for about 15 minutes.

Step 3: Roll and Fill the Dough

Transfer the dough back to your floured work surface. Roll the dough out until it is about 8 inches by 10 inches.

Roll the dough tightly starting with the short side.

Cut the roll into 6 pieces and arrange them in your greased air fryer basket.

Cover the pan tightly with plastic wrap. Allow rolls to rise in a warm place for about 60-75 minutes or until the rolls have doubled in size.

Air fry at 320ºF for 8-9 minutes or until the rolls are golden brown and cooked in the middle.

While rolls are baking, prepare the icing. Place all ingredients in a medium mixing bowl and beat together.

Drizzle over warm rolls and serve.

Don't have the correct ingredients on hand? Or want to change something up? Here are some helpful tips for you to change this homemade cinnamon rolls air fryer recipe.

Want to personalize this cinnamon rolls in the air fryer recipe? Here are some of my tried and true tips for changing up this recipe.

If you love recipes like this, you may also enjoy Grandma's Old-Fashioned Caramel Sticky Buns.

Here's the list of the kitchen tools and equipment needed to make this recipe at home.

Once cooked, air fryer cinnamon rolls can be stored on the counter for two days. For a longer period of time, it's best to store them in the refrigerator.

If you want to warm up leftovers you can use the microwave, regular oven, or air fryer to heat them up.

Whether you're a dough expert or this is your first time making homemade pastries, here are a few tips to make sure things go easily and you have great results.

Do you like a variety of sweet breakfast pastries? Here are some recipes you may also like to try:

Can cinnamon roll dough be made in advance?

Cinnamon roll dough can be made the night before and rise in the refrigerator overnight. They will be ready to cook the next morning. Remove them from the refrigerator and let them sit on the counter for 30 minutes to 1 hour before cooking.

How do you heat up cinnamon rolls in an air fryer?

Return the cinnamon rolls to the air fryer and heat at 325 degrees F for 2-3 minutes. Watch them closely that they don't burn.

Why make cinnamon rolls in the air fryer?

When you air fry cinnamon rolls, it means you don't need to heat up the house by turning on the oven. Plus there's no need to preheat the oven for 15-20 minutes before cooking. Finally, the air fryer cooks up cinnamon rolls in about half the time it takes in the oven.

Ready to get cooking? Remember that you can print this recipe if you would like. 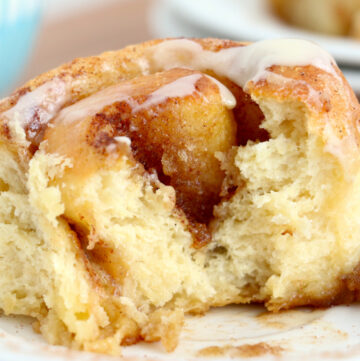 Cook in the Air Fryer