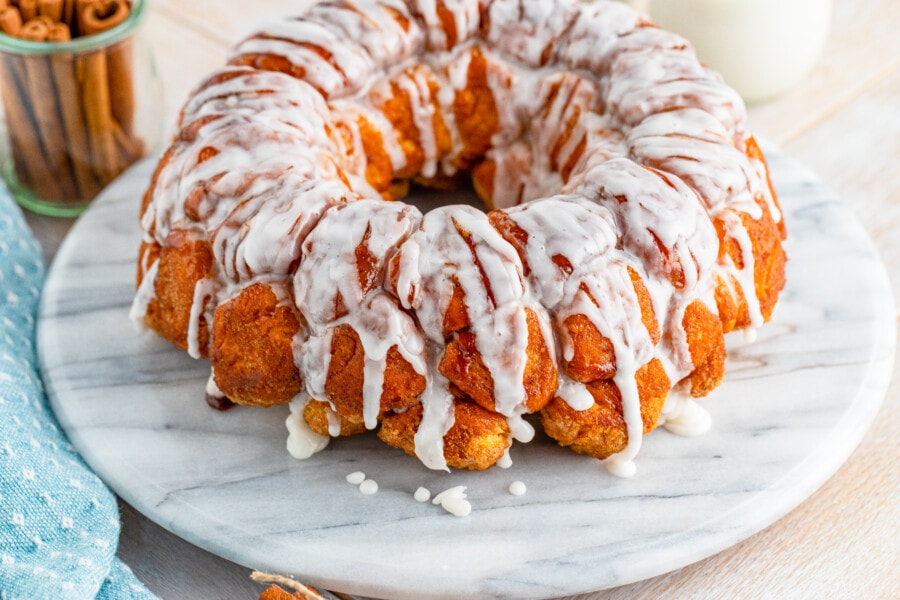 I first discovered this cinnamon roll pull apart bread at a local festival and it was love at first bite. That’s all that stands out in my mind about that day.

Since then, I’ve made this amazing treat on so many different occasions. Give me a reason to make this pull apart bread recipe and consider it done! Any excuse will do.

Many times, Ken and I have eaten this pull apart monkey bread while watching television. I can barely recall what we watched, but I definitely remember this snack! Isn’t that terrible? Or maybe it isn’t so terrible. It all depends how you look at it, I guess. These gooey, sweet little balls are so yummy you can’t help but eat a bunch of them!

Best served warm, this dish never disappoints!  Haven’t met anyone yet that has. Everyone I know, including, (you guessed it) my next door neighbor and proud taste tester, Renate. Without hesitation, she gobbled these down so quick, she actually looked a little embarrassed afterwards. 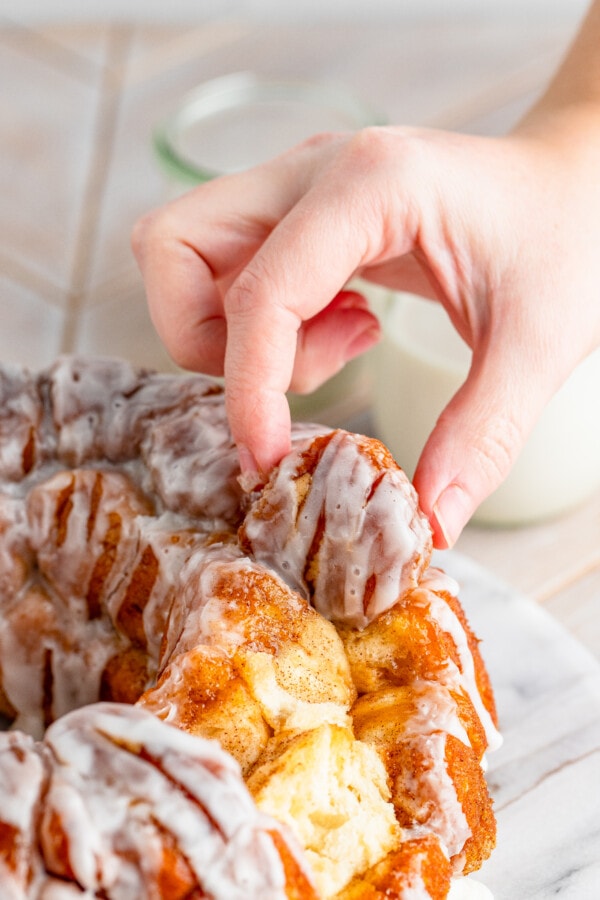 Renate profusely apologized for her behavior, but said it only served to demonstrate just how good this pull apart monkey bread was. She gave this cinnamon roll pull apart bread high marks and said if you’re a bread, cinnamon and sugar lover, it would be impossible not to fall in love with this dessert.

Make this once and I’m pretty confident it will score high on your “must make” list. Friends and family alike will be enamored with this delightfully scrumptious bread.

Pull apart cinnamon bread goes by several names; monkey bread being one of them. Monkeys love to pull apart their food so calling it monkey bread makes perfect sense. They’re not the only ones! People love finger foods as well and this easy caramel cinnamon pull apart bread is definitely one of them.

Also known as monkey brains, monkey buns, bubble loaf, pluck it bread and sticky buns, these are fun names indeed! But the real fun is in the tasting. No question.

Originally called, Hungarian coffee cake, we owe a big thanks to the Hungarians for bringing this treat to America. Many Americans, kids and adults alike, are very fond of this bubble loaf and I can’t say I blame them.

Call it what you will, bread, lovingly coated in cinnamon and sugar glaze is sheer genius! Can’t think of a better way to start your day. Or end it for that matter! Can you? 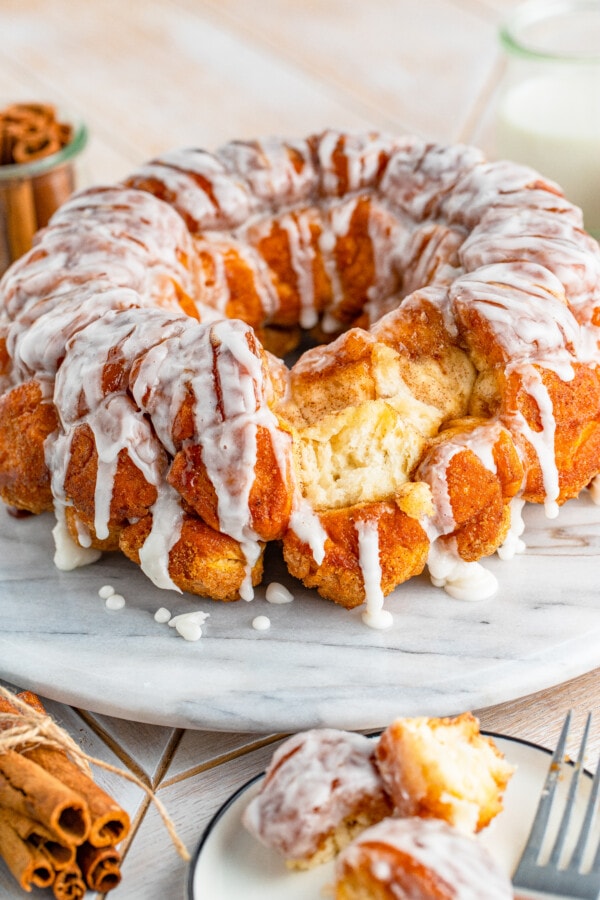 How can so few ingredients result in such a wonderful dessert? Cross biscuit dough with caramel, cinnamon and sugar and you’ve got one fabulous pull apart bread recipe in the making!

Start with refrigerated biscuit dough. Exact measurements are listed in the recipe card. 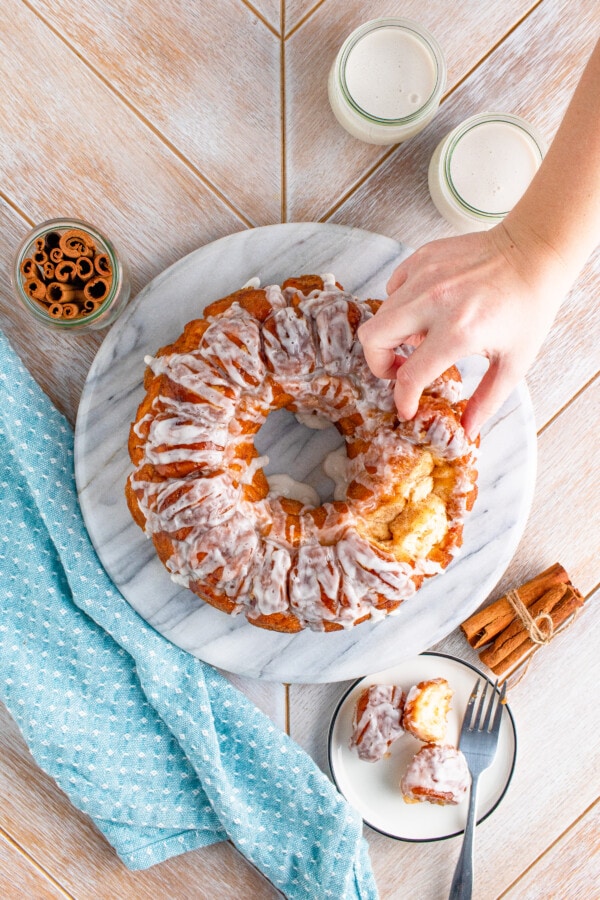 Speaking of kids, tell them there’s some monkey brains waiting for them at the table and watch them dive in! The pleasure they get out of pulling this cinnamon pull apart bread is a joy in itself.

Smiling faces covered with cinnamon and sugar as they lick their sticky fingers is a hoot! While it’s happening, I implore you to take pictures. You’ll treasure the memory for years to come.

Although my son is an adult now, he becomes a kid all over again when he bites into this monkey bread. I mean, what’s not to love when you think about it?

My husband is no different. You should see his eyes light up when I pull this caramel cinnamon bread out of the oven. You’d think Santa Claus came to town bringing the best gift ever! It’s laughable really.

Can’t blame either one of them for loving something that tastes so darn good though! 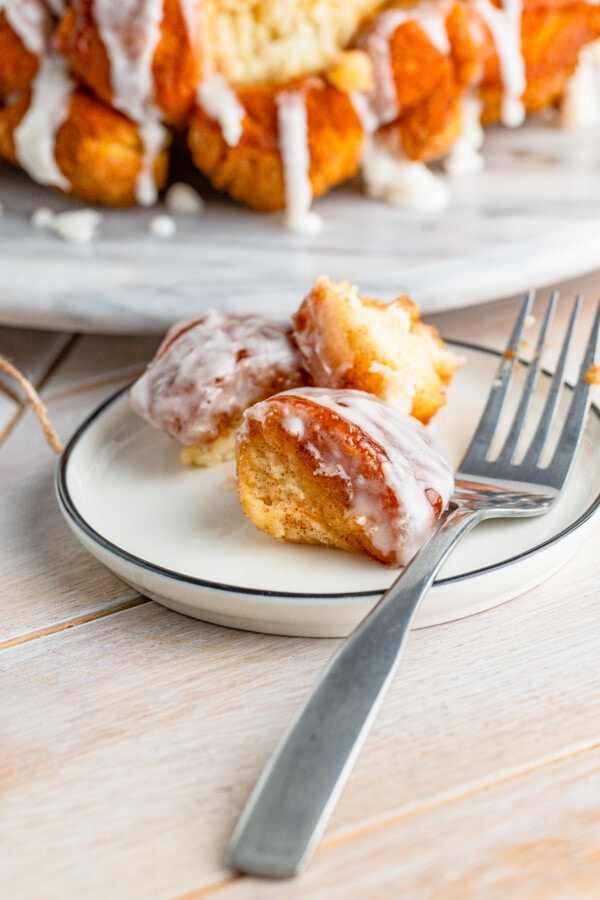 Ken said his grandmother once made this pull apart monkey bread but said it didn’t come close to mine. He didn’t think she’d used enough cinnamon and glaze. Those two ingredients are vital to making this monkey bread a success. She wasn’t the best cook and baker in the world, but she did her best.

From what Ken tells me about his gran, she was quite the character. Ken recalled a time he was watching a scary movie on TV, when she suddenly jumped up from behind wearing a purple wig and a spooky mask. It scared the living daylights out of him. Her laugh was so infectious, the two of them ended up howling.  She was quite a prankster, that one. Every time Ken thinks about her, he smiles. Listening to his granny tales is so heartwarming. I’m glad he had such an hilarious and wonderfully warm grandmother.

Warm is a word that comes to mind when I think about these monkey buns.

Calling it monkey bread, doesn’t do this recipe the justice it deserves. This pull apart bread recipe, elevates bread to whole new level and satisfies the yearning for carbs and something sweet like no other.

So much more than bread, it warms the belly and comforts the soul! It’s bread made sweet and beautiful.

Monkey bread became a long standing Christmas tradition when Ronald Reagan was president back in the 1980s. It’s been said many people follow that custom today. And why not add it to the many delights during the holiday season? In my humble opinion, you can’t have too many treats.

Don’t limit yourself to making this bubble bread at certain times of the year. The time of day shouldn’t be a factor either; although as a breakfast, it’s nothing to sniff at.

Ready made dough makes this one heck of an easy dish to bake. In 40 minutes, a platter of warm, glazy, cinnamony bread awaits you. The temptation is so great, you have to give in. 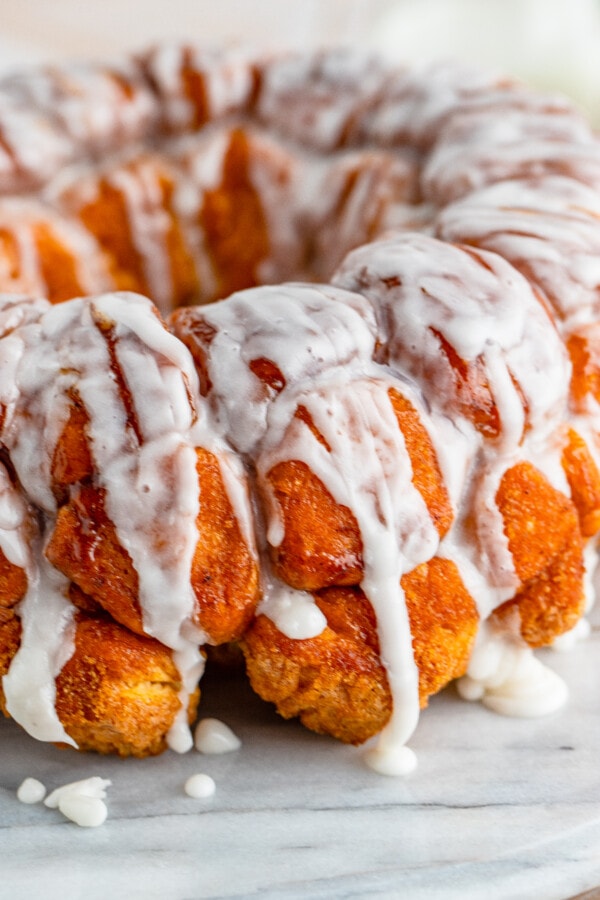 Chatted with my BFF recently and the topic of monkey bread came up. She said coffee and pull apart cinnamon bread go hand in hand. We quickly made a date to get together and told her that cinnamon roll sticky bread will definitely be on the menu. She was thrilled and, quite frankly, can’t wait.

Expecting company? These sticky buns are sure to please.

Sometimes words won’t do when it comes to explaining just how easy this recipe for Easy Caramel Cinnamon Pull Apart Bread is to make. The video below will show you how. With warm wishes, see you next time! 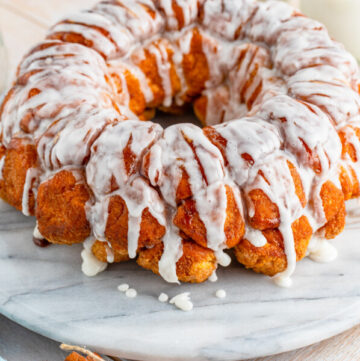 FOR THE BROWN SUGAR COATING