These Easy Cheesecake Chimichangas, also called Taquitos or Xango deep fried cheesecake, is an amazing baked or air-fried, tortilla-wrapped, fruit-filled, Xango dessert with cream cheese! Give this cheesecake chimichanga dessert a try and you won’t look back! 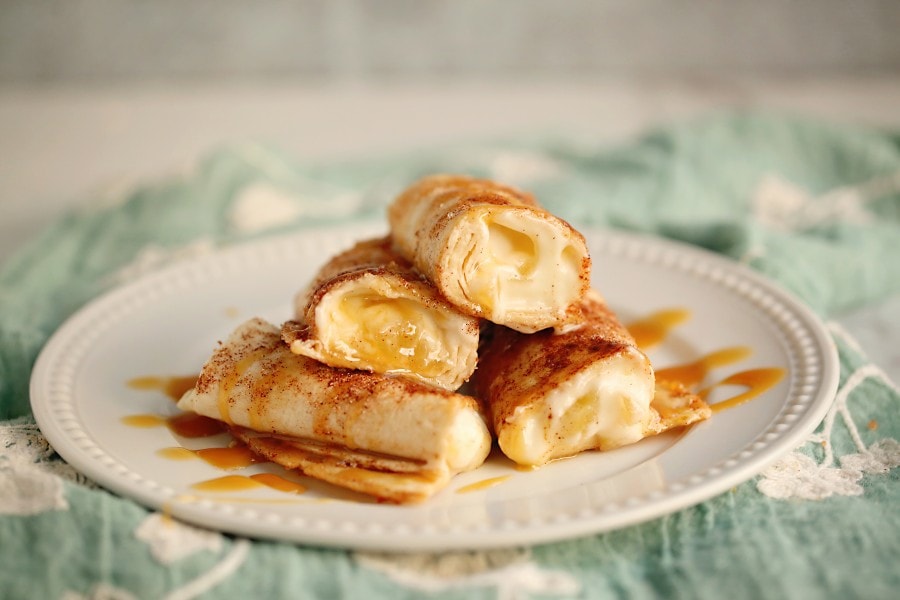 For all those unfamiliar with easy cheesecake chimichangas, I am here to tell you this is a bucket list kind of thing. I am not even kidding.

A cheesecake chimichanga is similar to a burrito, and can be filled with everything from cream cheese to meat. Chimichangas are often savory, like our pork and bean burritos or easy chicken salad snack wraps.

In contrast, a xango dessert recipe tends to be sweet, like these AMAZING easy cheesecake chimichangas. I’m not even exaggerating at how delicious this chimichanga dessert is to create.

Like the name implies, xango deep fried cheesecake is usually deep fried. However, you can also bake or air fry them and they’re just as good.

This deep fried, baked or air fried chimichanga dessert is filled with a dreamy, creamy cheesecake filling, your favorite pie filling (we chose apple for this recipe), caramel sauce, all stuffed inside a soft tortilla shell and rolled in cinnamon sugar.

Easy cheesecake chimichangas are cooked to crispy, warm perfection, and are absolutely amazing.

This xango dessert recipe is cheesecake without the graham cracker crust so you can hold it in your hand. How awesome is that? And you made it yourself, inside your own home!

Of course, the ease of this chimichanga dessert is both a good and a bad thing. They’re so easy to make and so tasty you might just find yourself eating way too many. Don’t say I didn’t warn you.

As a result, I only make this xango dessert recipe once in a while. And that’s not because they’re just delicious, it’s because they’re almost too good! If I made these regularly, my husband and I would both eat ourselves into oblivion, I’m sure of it.

Honestly, telling you this amazing xango dessert recipe is addictive is an understatement. I kid you not. No matter which pie filling you choose to use for your cheesecake chimichanga, you will not be disappointed with your results.

It is impossible to be.

When my son was young, I’d try to make xango deep fried cheesecake on Taco Tuesdays. They make an absolutely fantastic air fried or baked dessert chimichanga that fits the theme perfectly. 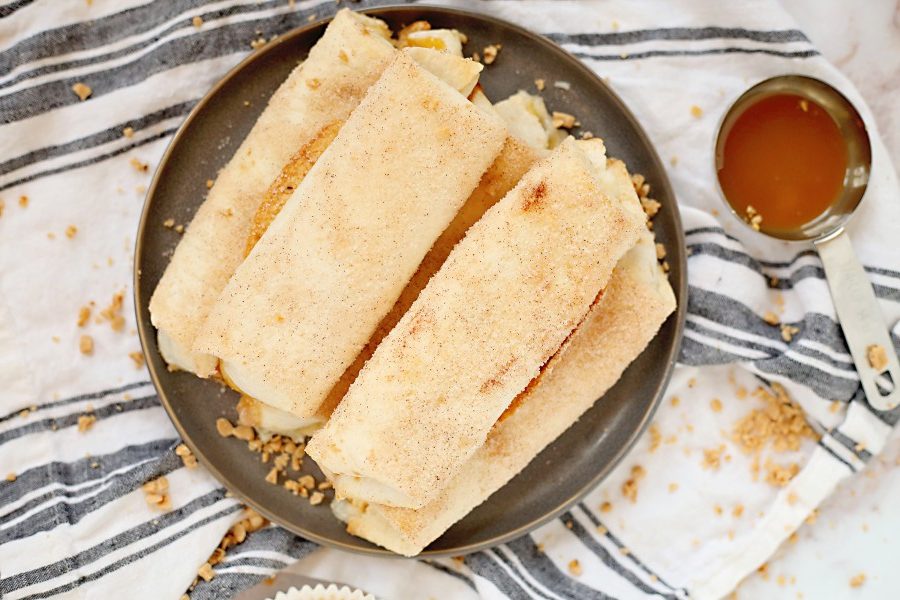 What is Xango Dessert? Chimichangas vs Xangos

Where xango and chimichangas are different, is what’s inside them.

Chimichangas can be savory or sweet, while xangos can best be described as fried cheesecake wraps.

Both are simple variations on burritos so when you get right down to it, they’re the same thing with different insides.

For this cheesecake chimichanga or xango dessert recipe, I’ve put together a delicious baked or air fried version of the classic xango deep fried cheesecake that I know you’re going to love.

While we’re here, and since I just told you chimichangas are a variation on burritos, let’s talk about the difference between these two foods as well.

Chimichangas are traditionally deep fried no matter what kind of filling they have, while burritos are not. 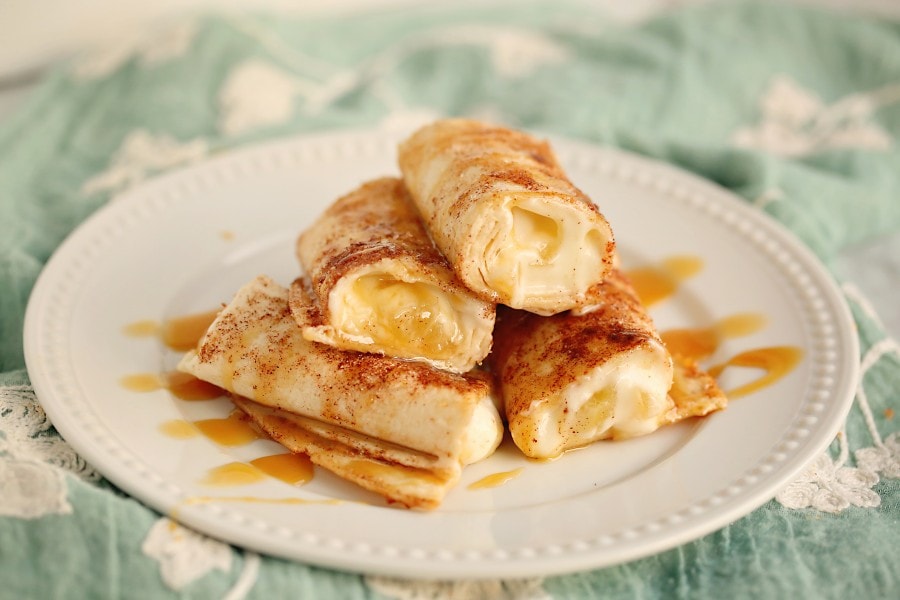 This baked chimichanga dessert is both incredibly delicious and simple to make. It only takes a few ingredients and a few minutes to whip up this absolutely mouth watering xango food. In fact, the hardest part about this cinnamon xango dessert recipe is stopping yourself from eating them all!

As you can see, the ingredient list is simple. You’ll most likely have most of the ingredients needed for this tasty dessert already stocked in your refrigerator and pantry.

More good news: whatever you don’t have is readily available at your local store, so it’s a simple matter to get everything you need.

See? If you do any sort of baking, you likely have all of these ingredients. There’s nothing on this list that will be difficult to find, even if you’ve never used the words “xango food” or “chimichanga dessert” before. 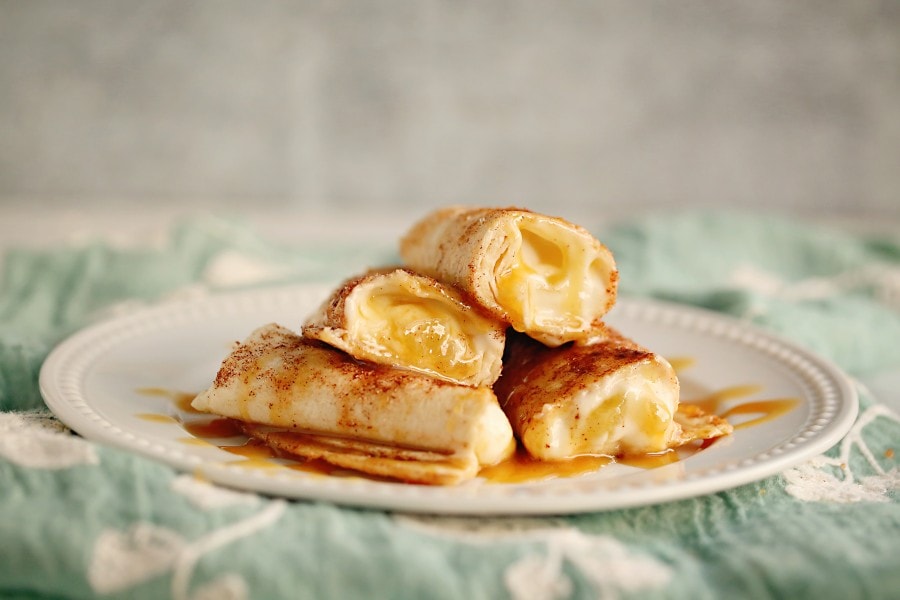 How to Make Easy Cheesecake Chimichangas

Making this delicious chimichanga dessert recipe is as easy as the ingredient list. You don’t have to do very much at all, especially compared to most recipes.

Mainly, you’ll be mixing, beating and baking. That’s all there is to it. It’s ridiculously simple and so, so good.

The first decision you’ll need to make is how you want to cook your cheesecake chimichanga. Bake, air fry or deep fry. Once you’ve decided, you’re ready to go.

That’s it. Easy peasy. A little mixing. A little baking. And poof. You have delicious dessert wraps just waiting to be devoured.

Once hot, prepare your basket with cooking spray. Makes cleanup so much easier.

Use toothpicks to secure chimichangas if needed. I usually put them inside the air fryer so the open edge is underneath.

Add your cheesecake chimichanga to the air fryer and fry in batches, if necessary. You want to avoid them touching each other while they cook.

Allow to cool enough to handle and enjoy every bite.

While I generally like to bake my xango Mexican dessert, another method is pan frying them. I prefer this to classic deep frying because of the mess that deep frying makes. Pan frying these chimichangas is incredibly easy.

Just remember that you should always freeze them for at least an hour to make sure they’re firm enough to stand up to the frying process. Otherwise, the filling will just ooze out of them and all over your pan.

If you fry these up right, you’ll have one of the best things you’ve ever eaten in your life—sweet or savory. I recommend trying these chimichangas all three ways, baked, air fried and pan/deep fried.

Each variation is incredibly delicious in its own way and while the filling may taste the same, the texture of the tortilla is different, leading to a different experience. 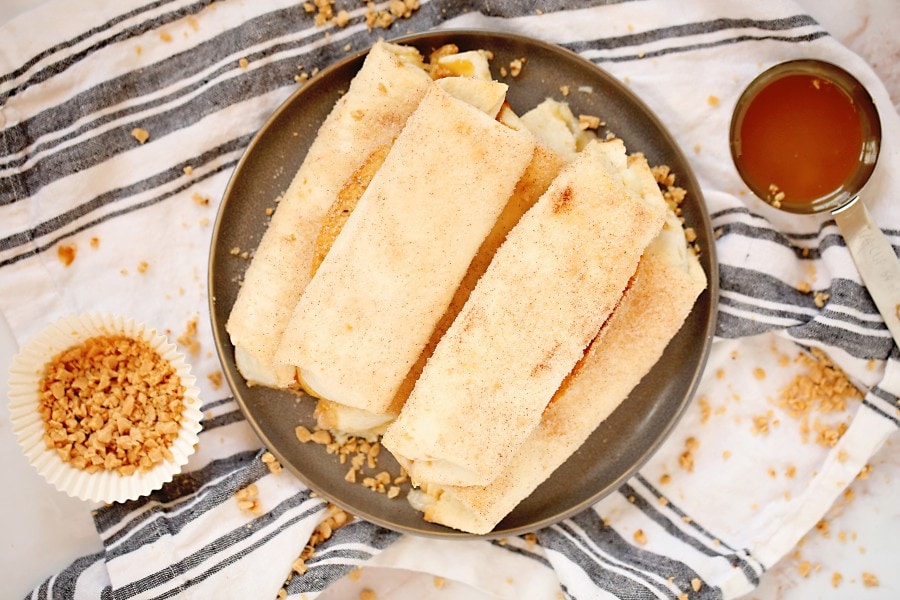 This is a super versatile recipe that lends itself to all kinds of creative cooking ideas.

Because this cheesecake chimichanga is basically a pie in wrap form, you can do all kinds of creative variations to change up the flavor.

Try adding different fillings or serving your xangos with different toppings. There are so many possibilities, which is one of the great things about this recipe.

If you’re feeling like you want something more substantial than a bit of cinnamon and caramel sauce on your baked dessert chimichanga, try adding some toppings like:

I added the last two because they are such classics!

Although this Xango dessert recipe is cheesecake-filled, you can also use other fillings. Remember, this is just a rolled-up pie, so almost anything works.

Some great filling variations include: 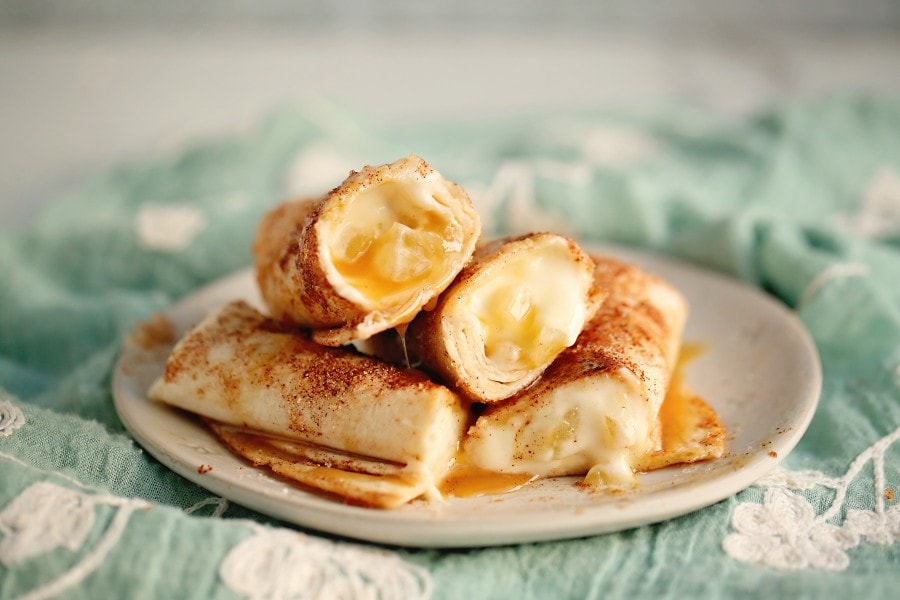 This baked dessert chimichanga is basically a hand-held pie in wrap form, so serve it accordingly. You can serve this with any traditional topping that you’d normally serve on a regular pie. That means things like whipped cream and ice cream work well. You can also drizzle them with caramel sauce for a super tasty treat.

Classic cinnamon sugar is always a great bet, too. I even like to serve these alongside fresh berries. It’s so good!

You can store these delicious Xango Mexican dessert wraps in the refrigerator for up to four days in an airtight container. You can’t freeze them, so be sure to gobble them up before time runs out!

Don’t worry too much about storing these. I’ve found that they’re usually gone in a couple of days!

This recipe is so easy to make, there’s not a lot to remember. In fact, this entire FAQ revolves mostly around variations and storage. Even then, there’s not much to say. It’s just that easy!

What are some variations I can try with this recipe?
The better question would be what can’t you try? Mix it up by using different pie fillings and topping this dessert with different ingredients. Anything goes!

How long do homemade chimichangas last?
They will keep for about four days in the fridge in an airtight container. You can’t freeze them, so be sure to eat them while they’re still fresh.

I tried frying my chimichangas and the filling got all over the pan. What happened?
The most likely answer is that you didn’t freeze them long enough. It’s so important to freeze your chimichangas until they’re fully firm before pan frying to avoid a mess of filling all over your pan.

This xangos cheesecake dessert is absolutely delicious, and it’s so easy to make. The entire thing comes down to a bit of mixing and then a little baking. That’s it. It’s one of the easiest recipes to make and it’s so much fun. There’s nothing better than what is basically a hand-held pie wrap that you can fill with anything and top with almost anything.

Give this super versatile recipe a try today. With so many great variations and such easy preparation, it’s the perfect dessert for any occasion.

Tried this recipe?Let us know how it was! 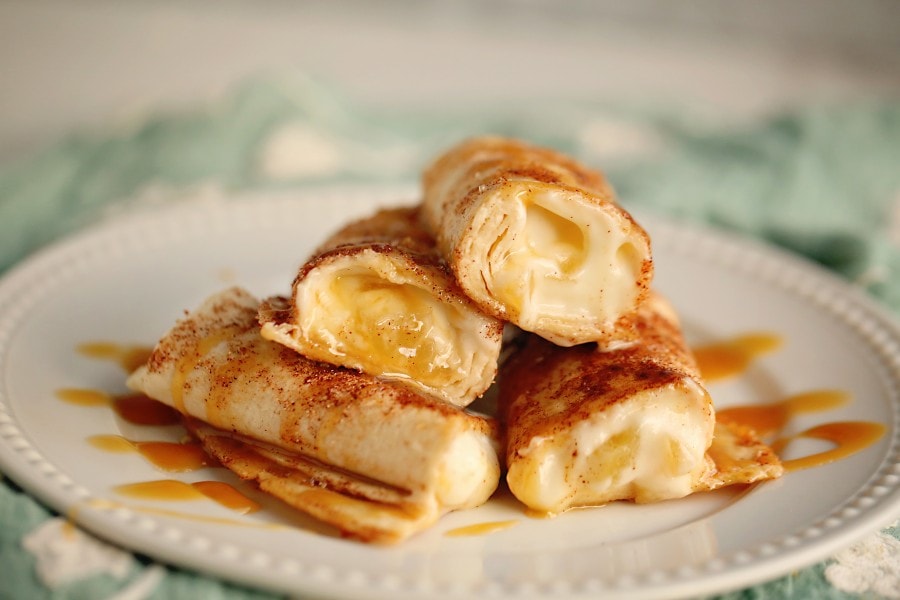