This Slow Cooker Chicken Enchilada Chili recipe has all the wonderful flavors and ingredients in enchiladas but is an easy-to-make slow cooker chili.

Chicken, beans, corn, enchilada sauce, and more delicious ingredients combine to create an incredibly easy dish that always has everyone coming back for more. Fire up your slow cooker and get ready to dive into delicious, cheesy flavor!

I'm a huge fan of Mexican and Tex-Mex food, and I particularly love enchiladas. I make them almost as often as I make tacos.

Mexican food is comfort food for me, much like a hot bowl of chili.

Sometimes I like to mix things up, and that's what I did with this chicken enchilada chili recipe. I took the zesty flavors of enchiladas and wrapped them all up into a warm and comforting bowl of chili.

If you think about the flavors found in both chili and enchiladas, it really becomes a no-brainer to put them together.

After all, they both have southwestern and Mexican spices, peppers, and other Tex-Mex staples such as beans and olives. Combining them results in a dish that’s the perfect marriage of chili and enchilada flavors and, of course, cheese! It’s a bit like cheesy chili spiked with a taco, and it’s legit.

This recipe turns both chicken enchiladas and chili into something new and interesting. Add the ease of preparation you get from a slow cooker, and this Mexican-inspired recipe hits a home run.

Just set it, forget it, and devour it later! That's all there is to it.

If you love using your slow cooker for hands-free cooking, you need to check out this slow cooker lemon chicken or flavorful slow cooker Korean beef.

To any of these one-pot meals, add a simple salad or crusty garlic bread or homemade cornbread and you’re good to go!

Why You Will Love This Recipe

Don’t be intimidated by the list of ingredients in this easy to make chicken chili. You'll find many of them in your pantry already. The prep takes only about 15 minutes and then slowly cooks throughout the day.

Added to the ease is that all of the vegetable ingredients come from a can! It's a snap to gather up everything you need in no time.

How to Make Chicken Enchilada Chili

Here are the step-by-step photos and instructions for making this easy slow cooker chili. For the complete instructions, check the recipe card further down on the page.

2. Place diced chicken in the bottom of the slow cooker. Top with taco seasoning and toss to cover the chicken completely.

4. Toss until all ingredients are well combined.

7. Return to the slow cooker and cook for an additional 30 minutes.

8. When cooking time is done, remove chili from the slow cooker.

9. Top with scallions and sour cream if desired.

And that's all there is to it. The only way you'll make chili any easier is if you buy it in a can.

Don’t have the correct ingredients on hand or want to change something? Here are helpful tips to change this crockpot chicken enchilada chili recipe.

Want to personalize this slow cooker chicken enchilada chili? Here are some ideas to change things up.

If you love recipes like this, you may also enjoy Slow Cooker Turkey Tortilla Soup.

The difference is in consistency. Chili has a thicker consistency than soup, which contains more liquid ingredients or a thickening agent.

What goes well with chili?

Cornbread is the perfect side dish to any chili, and there's nothing better than homemade cornbread.

What size slow cooker do I need for this recipe?

You will need a large crockpot for this chili. We used a standard 6 quart crockpot.

Is this chili spicy?

This chicken enchilada chili is mild. You can make it more spicy with hot sauce, additional seasonings or toppings such as jalapenos.

The History of This Delicious Chili

Without both chili and enchiladas, I would never have had the inspiration to make this delicious slow cooker enchilada chili. Food is delicious, but it's also quite interesting to learn about where it came from.

Because I love to learn about food as much as I love to eat it, I want to take a minute to look at the history of both enchiladas and chili.

Like so many dishes, the history of chili is shrouded in mystery. No one really knows where this spicy dish first came from or how it was invented.

Many historians posit that ancient man probably figured out how to combine meat and peppers into stew thousand of years ago, but it's pure conjecture, like almost every story about chili.

In addition to being mysterious, chili is also a source of myths and legends. One popular myth is that a Spanish nun, Sister Mary of Agreda, supernaturally appeared to Native Americans in the early 1600s bearing the first recipe for chilis. It consisted fo chili peppers, venison, onions, and tomatoes.

What we know as chili today appears to have roots in the American West, particularly Texas. One old story that continues to persist is that immigrants from the Canary Islands brought a recipe for chili with them when they settled in what is now San Antonio in the early 1700s.

The only thing food historians know for sure is something that we all already know - chili was popular among cowboys and pioneers out on the Western frontier.

We all know what enchiladas are. These delicious rolled tortillas are filled with meats and other ingredients and then bathed in a sauce and baked. They can be found all over North America in every Mexican restaurant you enter.

As you might guess, enchiladas come from Mexico. As far back as the early Mayans, people of the region rolled ingredients into tortillas. It's been a centuries-old way of eating in that area of South America.

The first enchiladas were not the saucy, baked dishes that we think of today. Rather, they were corn tortillas wrapped around fish. Spanish conquistadors were first introduced to this type of food as they made their way across Mexico.

The popularity spread among explorers and crept into North America over time, as well. Settlers along what is now the Texas/Mexico border were used to the flavors found in this dish, and they enjoyed it immensely.

In fact, enchiladas were featured in one of the first Mexican cookbooks every printed in the early 1800s.

Over time, enchiladas were altered by North American cooks, eventually becoming what we now think of today when we think of them.

Although today's enchiladas might not be entirely authentic, they are entirely good, which is exactly what this slow cooker enchilada chili is all about. It has all the sensibilities of both chili and enchiladas wrapped up, as it were, into one delicious dish that's easily made in the slow cooker.

If you love chili and enchiladas, you're going to love this recipe. It's a great twist on both of those classic dishes, and it's one of the easiest recipes I've ever concocted. It's perfect for a weeknight dinner, at gameday bashes, and at special events and potlucks.

Basically, there's never a time when this chili won't be welcomed with open arms, open mouths, and spoons in hand. Give it a try, and I know you'll love it as much as we do. It's so simple, I'm certain you'll find yourself making it again and again. 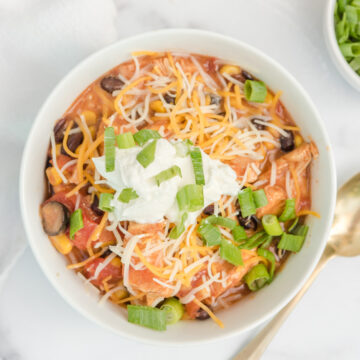 Notes:
This is an easy option for dinner that has a ton of flavor!
An alternative way of cooking the chicken is placing the whole chicken breast(s) inside the slow cooker and shredding with a fork before adding in cheese.
Keep the left-overs inside the refrigerator for up to 4 days after cooking.