This Reuben sliders recipe is a delicious, appetizer-sized take on the classic Reuben sandwich we all know and love. This tasty Hawaiian roll slider recipe is packed with cheese, corned beef, and even that classic 1,000 Island Dressing that makes the classic Reuben so tasty or our homemade dressing. These sliders are perfect for any event, and they’re always a winner. 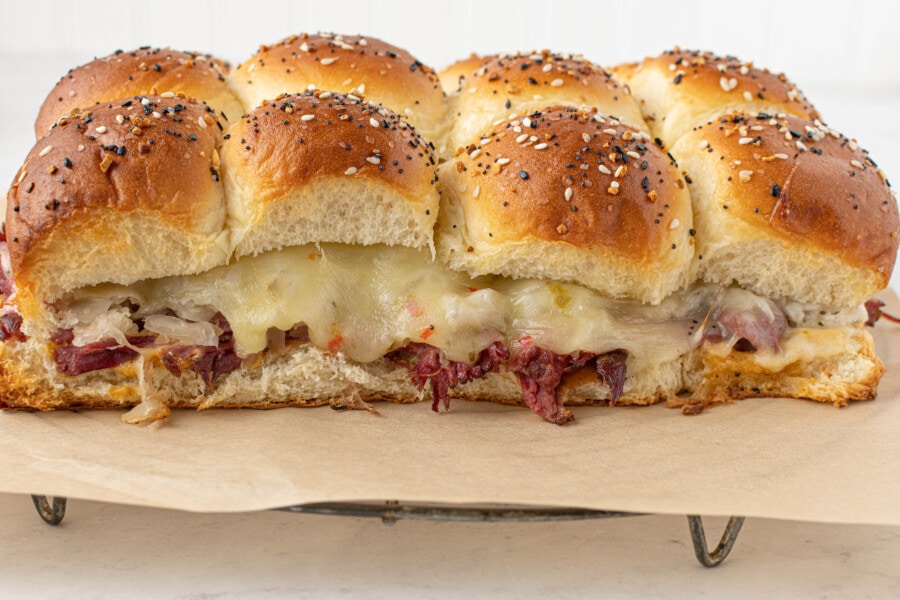 Reuben sliders are one of my new favorite treats to make. I’ve always loved the classic Reuben on toasted bread. All that tasty cheese covering that delicious, tender corned beef, topped with 1,000 Island or Russian Dressing, and sandwiched between two slices of delicious toasted rye bread. It’s a classic that I keep coming back to again and again.

For the record, personally, I find Russian dressing too spicy for me. Between the horseradish and hot or chili sauce I just find the sweetness of thousand island dressing, with all of those sweet pickles, superior. My son disagrees with me.

I’ve been eating Reuben sandwiches since I was a kid, and I’ve been making them for almost as long as I’ve known how to cook.

When I got married, I kept making them for both myself and my husband. When we had our son, I introduced him to the Reuben. Now, we’re a household of pure Reuben lovers, and we can’t get enough of them.

Now that I have perfected my own corned beef in an instant pot we can have corned beef anytime we want and we enjoy it even more!

The only problem with coming back to something over and over is that it can get stale. That’s when I decided to try switching things up.

How could I get all the great flavor in a new, creative way that shook some of the dust off of my favorite recipe?

One day, I was making some simple chicken sliders for a party, and that’s when it hit me. I could take the classic flavors of a Reuben sandwich and turn it into a slider! It was a genius moment if I do say so myself.

I made up a batch and served them up to my son and husband, waiting to see what the verdict would be. It was a resounding yes. Even though I made quite a few of those little sandwiches, they were all gone in just a couple of days. 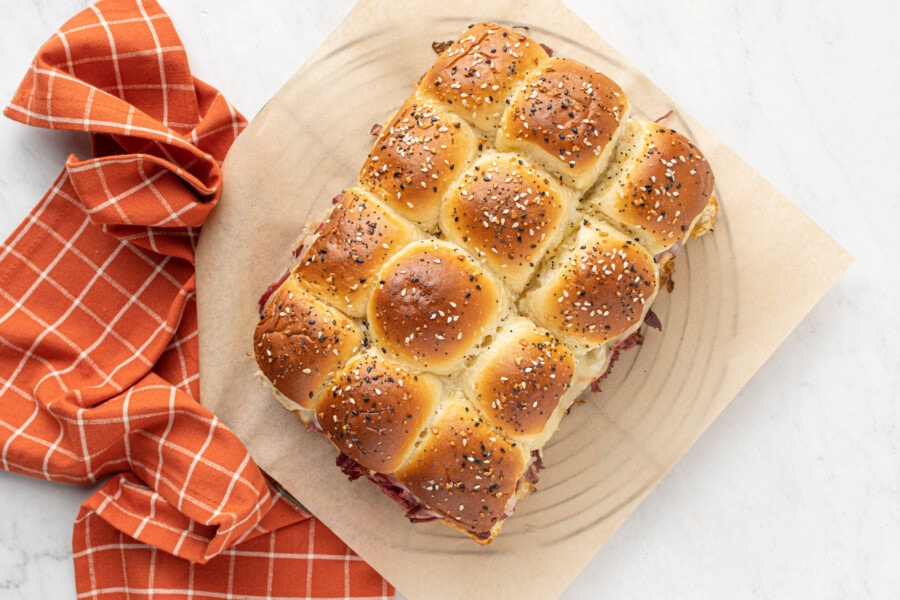 How This Amazing Appetizer Came to Be

This Reuben sliders recipe takes the flavors of the classic sandwich and, well, sandwiches them into the equally classic Hawaiian roll slider recipe. It’s two great tastes that taste great together, to quote a famous candy slogan.

There are three main points of inspiration for these sliders – the Reuben sandwich, sliders themselves, and Hawaiian rolls.

Because I love the history behind food as much as I love food itself, I want to take you on a brief tour of each of these aspects of this Reuben sliders recipe.

History of the Reuben Sandwich

Although the Reuben Sandwich isn’t that old, no one is quite sure where it actually comes from. There are two competing claims to the Reuben throne.

This story asserts that Reuben Kulakofsky, a grocer in Omaha, Nebraska, asked for a sandwich made of corned beef and pastrami at his weekly poker game which was held in the Blackstone Hotel from 1920 through 1935.

The story goes that the son of the Blackstone’s owner, Charles Schimmel, made the first Reuben for Kulakofsky. The sandwich became a local hit with it was put on Blackstone’s menu, and that fame spread when a former employee of the hotel won the national sandwich idea contest with the recipe.

The competing account states that the Reuben was created by Arnold Reuben, the owner of Reuben’s Delicatessen, in New York City.

According to this version, Arnold Reuben created the “Reuben Special” around 1914 when the famed Broadway actress, Marjorie Rambeau visited the deli one night for a snack when the cupboards were low on everything.

Arnold Reuben created the sandwich with what he had on hand, and thus, the Reuben was born.

Whichever account is the correct one, we know one thing for sure. These sandwiches are delicious!

These days, the term sliders is used to describe any kind of small hamburger or sandwich, but there was a time when it was synonymous with White Castle, a popular burger joint in the United States.

The moniker was coined in the 1940s by sailors in the U.S. Navy. According to the sailors, the delicious miniature burgers were so greasy that they slide right down in one or two bites.

Sailors may have called these tiny burgers sliders in the 40s, but they were being made well before then. The White Castle System of Eating Houses was founded in Witchita, Kansas in 1921.

As White Castle – as the aforementioned system is now called – is America’s oldest burger joint, the star of their menu was, as you might expect a five-cent hamburger.

White Castle regularly promoted their burgers in newspapers, offering five burgers for ten cents. Over time, the company’s burgers got smaller and their prices got bigger, but the popularity of the burgers never faltered.

In fact, it only grew. White Castle was the first hamburger chain to sell a billion hamburgers.

Fast forward to today, and you can get sacks of 20 or more of these little burgers at White Castle restaurants all over North America.

They’ve become so popular, in fact, that you can even find them in places like Japan, Malaysia, and Mexico.

These days, Hawaiian rolls are the bread of choice for any type of slider. They’re soft, sweet, and so delicious. Unlike many foods featured on my blog, we know exactly where they came from.

They’re the result of a local baker who made good using bread recipes of Portuguese descent.

Hawaiian buns are closely related to Portuguese bread because of the Portuguese settlers who came to the islands. Food historians say that when Portuguese farmers settled the islands, they brought their bread recipes with them.

These recipes were embraced whole-heartedly by locals, and they soon began to make their own variations. That’s where we make the move from Portuguese rolls to Hawaiian rolls.

When we talk about Hawaiian rolls, we’re almost always talking about King’s Hawaiian rolls. They’re the only commercially available Hawaiian rolls that I’ve ever seen. These rolls were born in Hilo, Hawaii in the 1950s.

It was there that founder, Robert Taira, started a bakery selling loaves of the soft, sweet bread. From there, its popularity spread all across the islands and then across the ocean to the mainland.

Today, you can find it in every store and supermarket across North America and beyond. 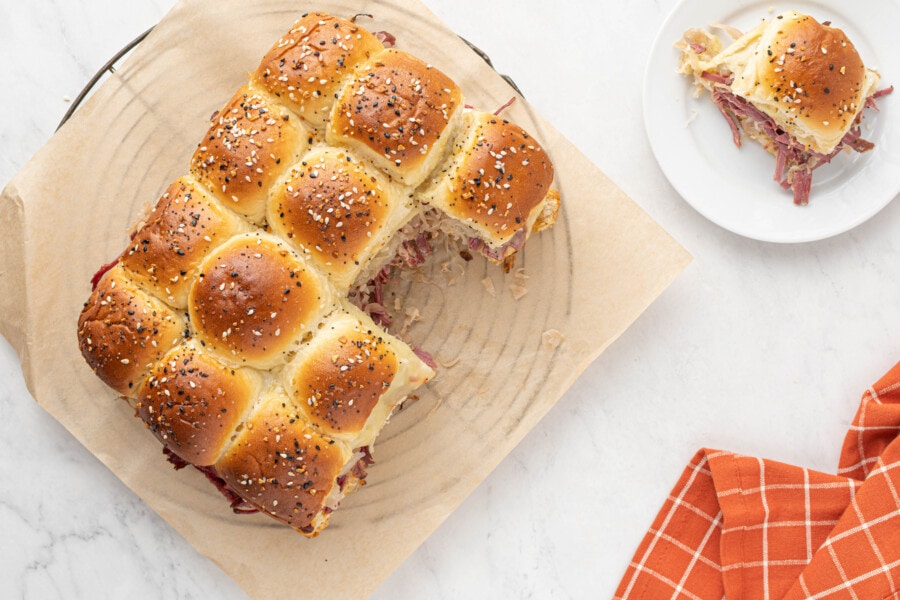 This Reuben sliders recipe is a delicious combination of the classic flavors of the Reuben sandwich and the soft bun and fun-sized portion of a Hawaiian roll slider recipe.

One of the easiest seasonings to find and buy or make yourself. Everything bagel seasoning consists of

What did I tell you? Is that easy or what? It’s not just easy. It’s super easy.

If you thought the ingredient list for this Hawaiian roll slider recipe was simple just take a look at the recipe. You’ll find the complete recipe with all amounts and cooking times in the recipe card, but this overview will show you just how simple this recipe is to make.

These delicious sliders should be served piping hot right out of the oven. Just put them on a plate and let everyone enjoy. There’s no need for extra condiments or toppings. Just gobble them up!

I like to serve mine with a side of fries. Any fries are excellent with it from classic French fries to curly or home fries. That’s all you need for this tasty Hawaiian roll slider recipe. 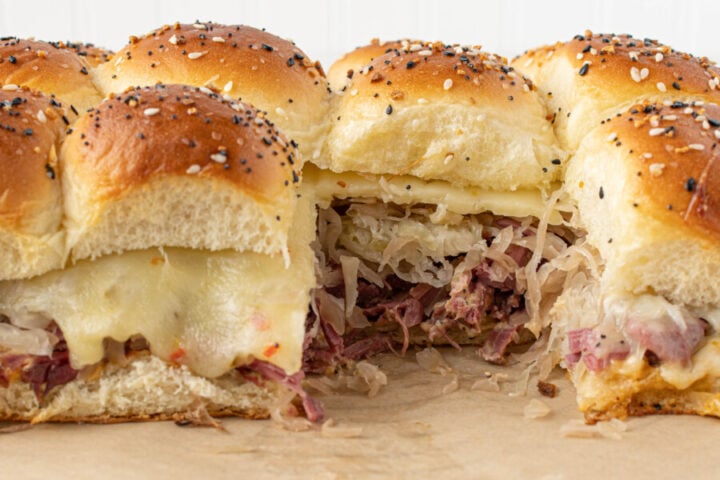 These sliders will keep well in an air-tight container in the refrigerator for up to five days. You can’t freeze these sandwiches, so be sure to enjoy them before your time’s up! Don’t worry. They rarely last longer than a couple of days.

There are just a few points to note before we go. Read below, and I’ll answer why Hawaiian rolls work best, where to find corned beef if you aren’t making it, the cheese, I chose, and more tidbits.

This Reuben sliders recipe is everything we love about both Reubens and sliders, and it is so legit. A classic Hawaiian roll slider recipe approach coupled with the flavors of a Reuben combine to create little sandwiches that are absolutely divine and disappear in no time flat.

Give them a try, and I’m sure you’ll find yourself making them more often than you might think. 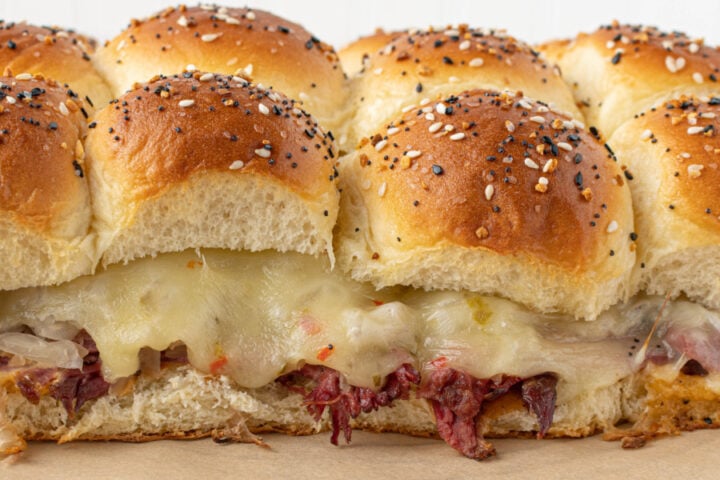 If this post has you hungry for more delicious Reuben everything, you’re in luck! I’ve got some more great recipes that involve everything we love about Reuben sandwiches from sauerkraut to corned beef. 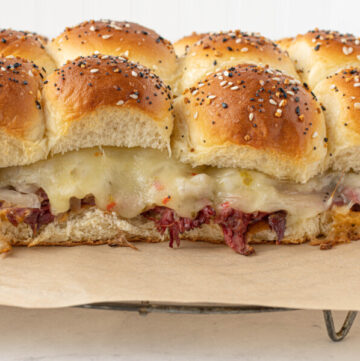 Reuben Sliders - An Easy Variation on a Classic

Storage: Sliders may be stored in an airtight container or a baggie in the fridge for up to 5 days. 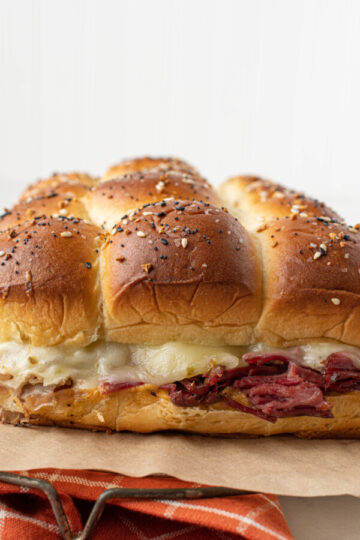