This homemade Cornbread and Sausage Stuffing recipe is full of flavor and is perfect for any holiday meal. Loaded with flavor and taste, this southern sausage stuffing is so simple and easy to make. 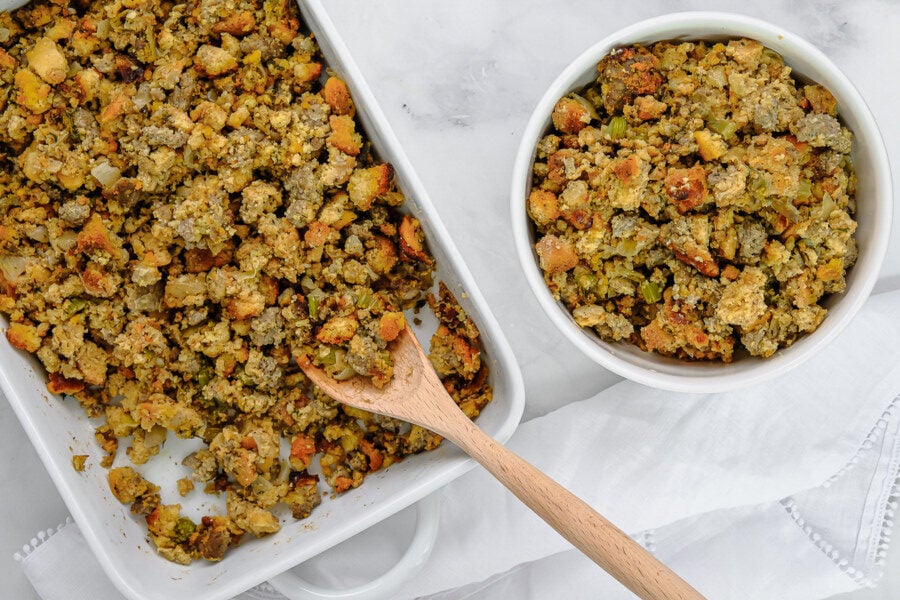 Can we all just agree that stuffing is one of the stars of the holiday dinner show? There’s something so comforting about the hearty dish that makes it irresistible to deny.

I’ve been a fan of stuffing for as long as I can remember and I’ve eaten it several different ways. I’ve found that I prefer my stuffing to have meat in it but there are plenty of recipes that don’t have meat that you can easily make as well. (or you can simply alter this recipe and leave out the sausage if you really don’t want it in there.)

The flavor of this Sausage and Cornbread Stuffing recipe really won’t disappoint.

Just when you thought that your Thanksgiving or Christmas meal couldn’t get any better, along comes this simple stuffing recipe. It might taste like it took all day, but you’ll know the truth!

This isn’t like your traditional stuffing recipe, though. This cornbread sausage stuffing recipe is baked outside of the turkey in a separate baking dish, which is what makes it unique.

As a matter of fact, have a look at our Best Oven Roasted Turkey. We make both of these every chance we get. For the record I haven’t stuffed our turkey in years!

These are the two recipes I have relied upon for years.

You can also use store-bought cornbread or my cornbread recipe as well. Either is perfectly fine. (but let’s be real – homemade is always the best!) 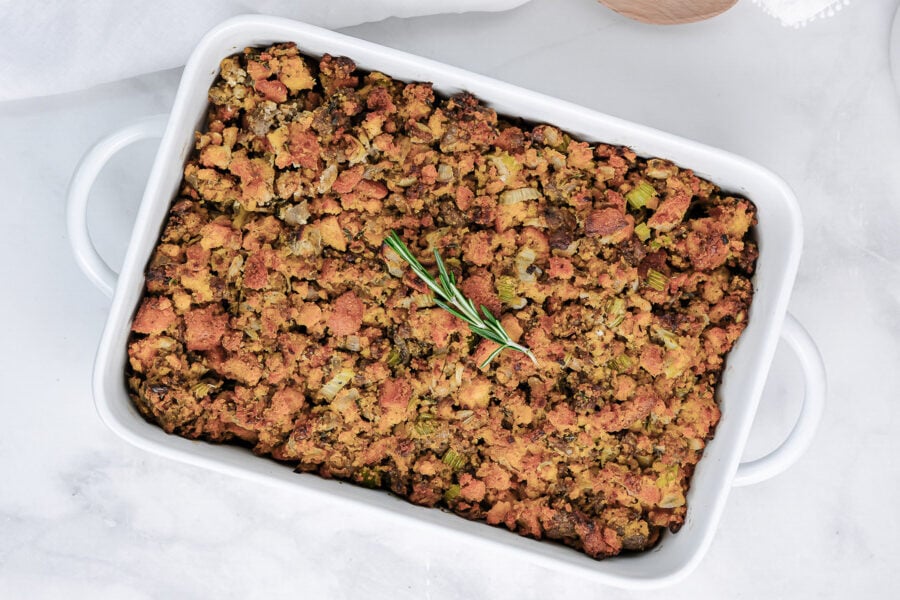 I find it amazing when people don’t have stuffing as part of their holiday dinner table. It’s seriously one of my favorite parts!

And in my mind, if people don’t make it as one of the main side dishes, this just means that they haven’t tried this recipe yet…because when they do, they’re going to be hooked.

While I love the flavor that this simple stuffing recipe has when it’s taken out of the oven, it’s actually really good as leftovers the next day as well. I’ve even been known to eat it cold, straight from the container because I enjoy the flavor so much.

When you only make it a couple of times per year, there’s a craving that you just can’t deny! 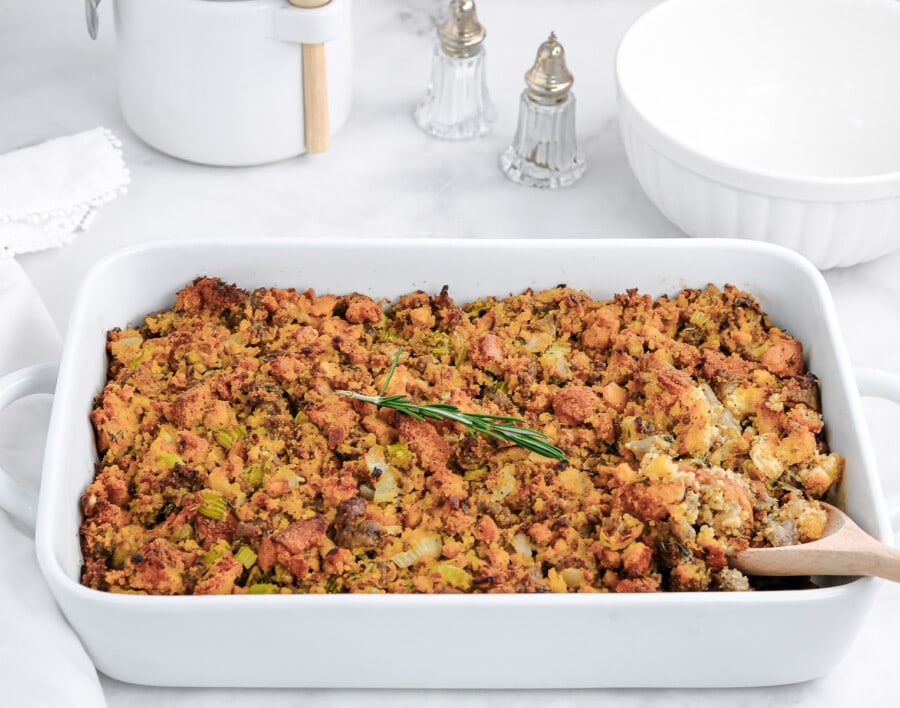 While I’m pretty proud of the recipe as it stands, there are a few ways that you can alter it a bit to fit your taste buds and dietary needs. I’ll go over some of the simple suggestions that you can do to alter this recipe easily.

If you don’t want to add in the meat, you don’t have to. It does add a lot of flavors but it’s not a requirement to make this dish. You can omit the sausage if you want and still create a delicious side dish of stuffing.

This is another addition that adds a ton of flavor as well but if you want to swap it out for a low-sodium option or liquid, you can absolutely do that without worry.

I’m a huge fan of adding sweet onions to my stuffing but this is another addition that you can take or leave. If you are going to use onions, I do highly suggest using sweet ones so that they don’t overpower the dish. If you choose to leave them out, that’s totally fine as well. 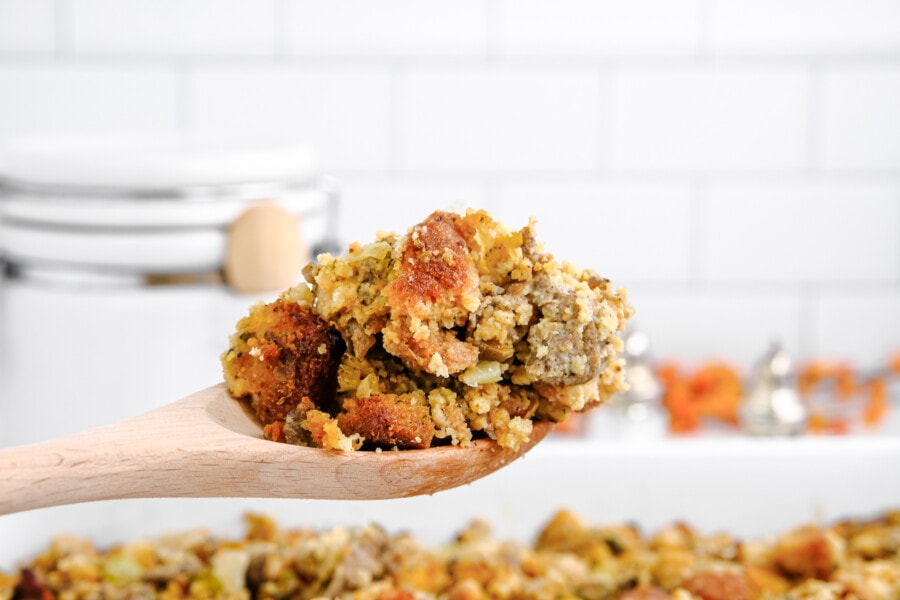 What goes good with cornbread stuffing?

So many things. You can easily eat this stuffing recipe as is but there are additions that will go perfectly with it as well. This homemade cornbread dressing can be topped with a homemade gravy or even a bit of cranberry sauce as well.

All the other traditional holiday side dishes taste so good with this recipe, too. Green beans, mashed potatoes….all of it. Delicious.

Does cornbread need to be stale for stuffing?

You don’t want to use cornbread that is super moist but you don’t have to let it set out on the counter for days, either. Luckily the consistency of cornbread is pretty much perfect for making stuffing. It’s a bit drier than other bread, making it ready to use easily.

How do you know when dressing is done?

You’re going to have to eyeball it. One of the biggest clues to know that the stuffing is done cooking is to make certain that there isn’t any liquid just sitting on top of it after it’s done baking in the oven.

If the top is dry and looks a bit golden, that’s a good indicator that it’s done and ready to be pulled.

How to Make This Cornbread Stuffing Recipe 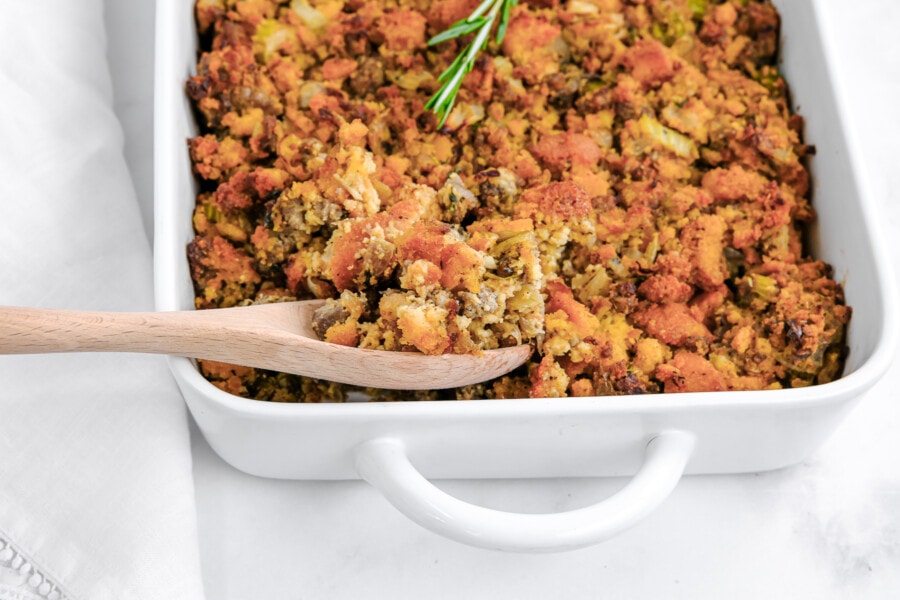 How to make cornbread stuffing from scratch

If you are using this cornbread for your stuffing, you will use about three-quarters of the recipe—the rest is for nibbling. For best flavor and texture, dry the cornbread, add a little half-and-half, and let it soak for at least an hour.

To make the stuffing a day in advance, increase both the chicken stock and half-and-half by ¼ cup each and refrigerate the unbaked stuffing 12 to 24 hours; before transferring it to the baking dish, let the stuffing stand at room temperature for about 30 minutes so that it loses its chill.

Place cornbread in a large bowl. Whisk together stock, half-and-half, and eggs in medium bowl and pour over cornbread. Toss carefully to coat so cornbread doesn’t reduce into tinier bits. Set aside.

Heat skillet until hot. Add butter, then sausage, and cook until sausage no longer pink. Remove sausage with slotted spoon and place in a bowl until needed.

Add half of onions and celery to skillet until tender. Transfer to bowl with sausage.

Add butter to the skillet and sauté onions and celery until tender.

Add thyme, sage, garlic, and stir for about 30 seconds.

Add to cornbread with sausage mixture and stir softly until blended watching not to break up the cornbread into even smaller pieces.

Cover bowl with plastic wrap and refrigerate for at least 1 hour or up to 4 hours.

Butter baking dish and fill with stuffing. Press gently with a spatula to fit stuffing into dish. 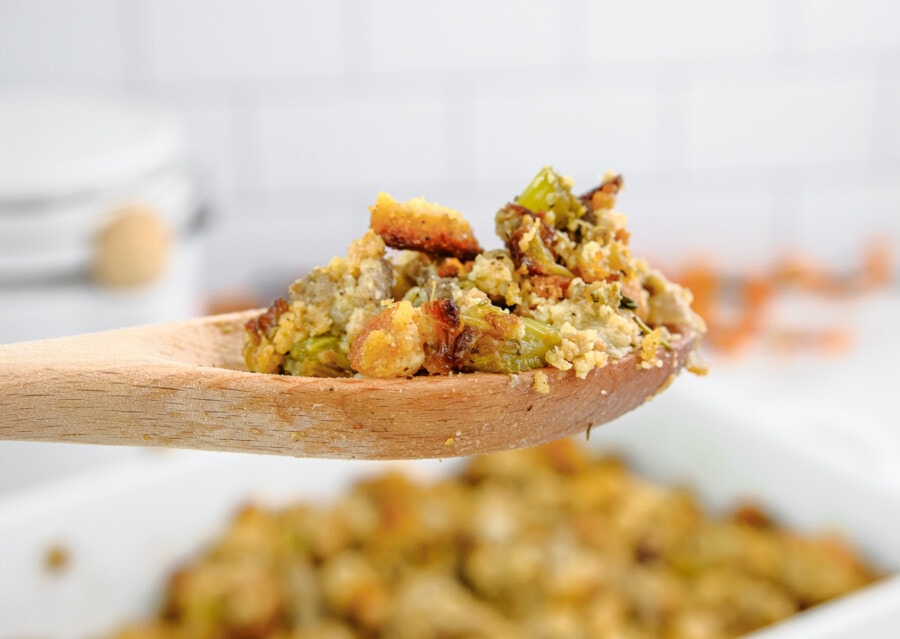 How to store leftover stuffing

If you’re worried about how to store your stuffing, don’t fret. All you need to do is add your stuffing to an airtight container and place it in the fridge. This will keep it as fresh as possible for as long as possible.

You can then easily reheat it to enjoy it over the next couple of days.

Can you freeze stuffing to enjoy later?

You can freeze stuffing to eat later, should you choose to do so. It might alter the texture of this stuffing a tad bit by doing so but you could easily reheat and add in some extra liquid later if you needed to. 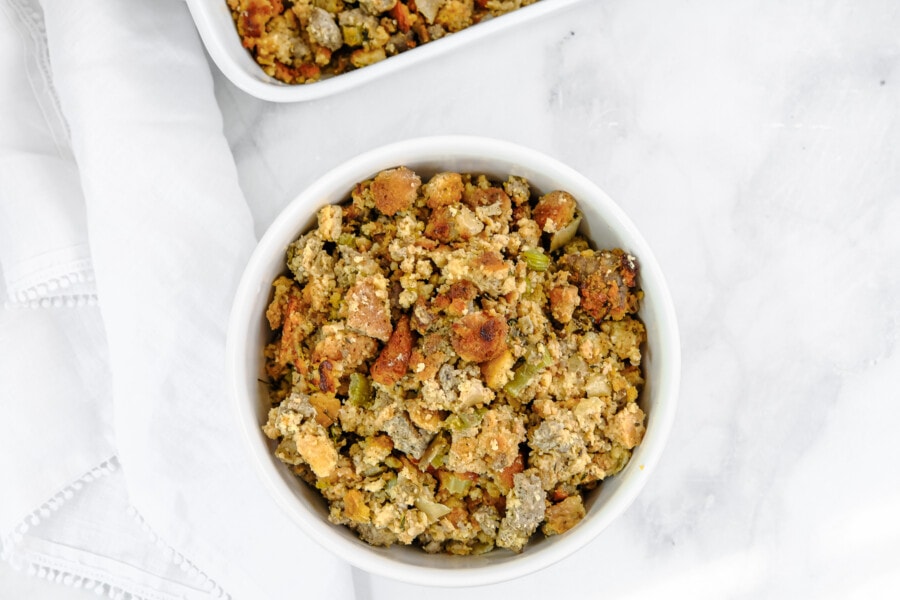 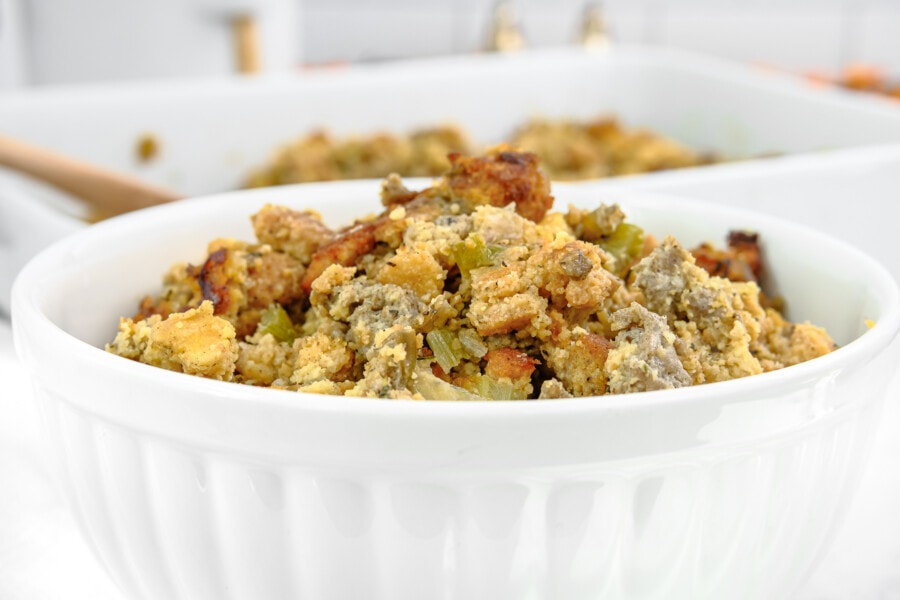 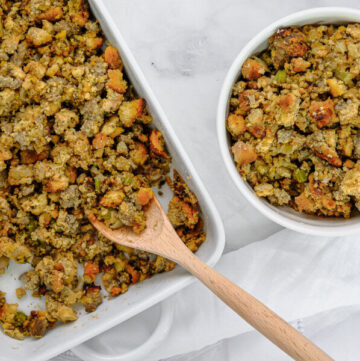 You're going to love this cornbread and sausage stuffing recipe. It's a simple side dish option perfect for holiday dinners.
Print Recipe Pin Recipe
Course Side Dish
Cuisine American

To make the stuffing a day in advance, increase both the chicken stock and half-and-half by ¼ cup each and refrigerate the unbaked stuffing 12 to 24 hours; before transferring it to the baking dish, let the stuffing stand at room temperature for about 30 minutes so that it loses its chill. Recipe adapted from America's Test Kitchen
Keyword homemade stuffing, stuffing, stuffing and sausage
Tried this recipe?Let us know how it was!