This Swiss Roll lush cake if full of sweet flavors that everyone will love. This delicious icebox cake features Swiss Rolls, pudding, whipped topping, and more to create a delicious, chilled treat that will satisfy even the sweetest of sweet tooths!

I don’t know about you, but I love Swiss Rolls. I’m not talking about the homemade kind, although I love them, too. No, I’m talking about those little pre-packaged rolled up logs of cream and chocolate cake that you find at grocery stores and gas stations everywhere. I’ve been a huge fan of them since I was a little girl. I had my first one when I was just about six or seven, and I was immediately hooked for life. Those little logs are packed with delicious chocolate and cream flavors, and they always hit my sweet tooth’s spot.

I never lost my love of Swiss Rolls as I got older. I was still eating them when I met my husband, I ate them after I had my son, and I still eat them today. So does my son. He learned from mom just how delicious these little treats are! Because I love the flavor of these little confection treats so much, I decided to make a dessert that revolved around them completely. That’s how I came up with this Swiss Roll lush cake. 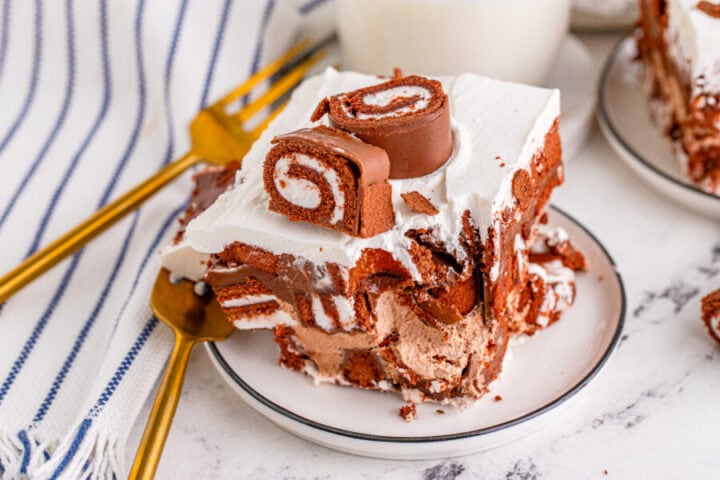 On a Roll to Swiss Roll Lush Cake

This is absolutely one of the most delicious desserts you’ll ever make – and one of the easiest! I routinely find excuses to make it, and no one ever complains, let me tell you. However, if it weren’t for three key components, I’d never have been able to dream up this tasty dessert. This dessert is a combination of cake, icebox cake, and of course, Swiss Rolls. Before we get into the recipe, I wanted to take a second to journey back in time and take a look at the history of all three of these tasty treats that make up my easy recipe. 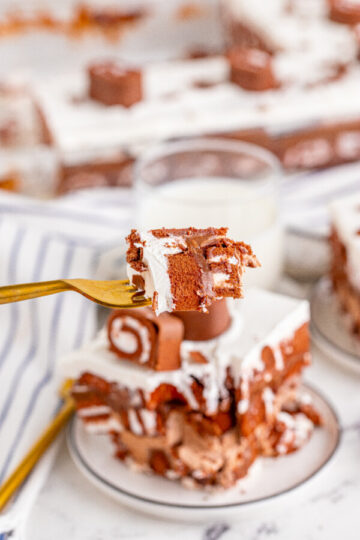 Traditionally, a cake is a sweet baked food made from flour, sugar, and various other ingredients. In their oldest and simplest form, cakes were actually modified bread. These days cakes are made in more ways than you can count, being as simple or as complex as the baker wishes. We even call certain dessert cakes that aren’t actually cakes, strictly speaking.

The cake has been around for centuries. The word cake itself is actually Viking in origin, coming from the ancient Norse word kaka. Ancient Greek called this baked good plakous. Believe it or not, Romans called cakes placenta.

Cakes remained nothing more than sweetened bread even until their earliest appearance in England. The first “modern” cake, the sponge cake was invented during the Renaissance period. Most food historians agree that this probably happened in Spain.

The icebox cake is a layered dessert usually made with layers of cream, wafers, and various other sweet ingredients and then put in the refrigerator to set.

Icebox cake is a variation of desserts like the charlotte and the trifle that was introduced in the 1930s as a more accessible version of the two desserts. It was also one of the prime selling points for promoting the icebox as a staple appliance for the modern kitchen.

Throughout the 30s the popularity of icebox cake skyrocketed because its use of commercial shortcuts and pre-made ingredients made it incredibly easy to make. This soaring popularity prompted many companies that made ingredients like condenses milk and wafer cookies to begin printing various icebox cake recipes on the back of their boxes.

Over the years, there have been a few variations on the icebox cake, but the one that most of us know and make today is composed of a series of layers using some sort of wafer, pudding, and whipped cream. Our delicious icebox cake uses Swiss Rolls in place of a wafer base.

The kind of Swiss Rolls we’re talking about today is the storebought variety from Little Debbie and other manufacturers, not the homemade variety. These rolls first appeared in 1962 when O.D. McKee, the founder of Little Debbie decided that the next big thing would be a miniature version of a popular dessert called a roulade. He’d seen roulades in several bakeries and decided that he could make a small version to be packaged and sold. Upon returning to Tennessee from his trip of touring bakeries, McKee added Swiss Rolls to the Little Debbie lineup a year later. 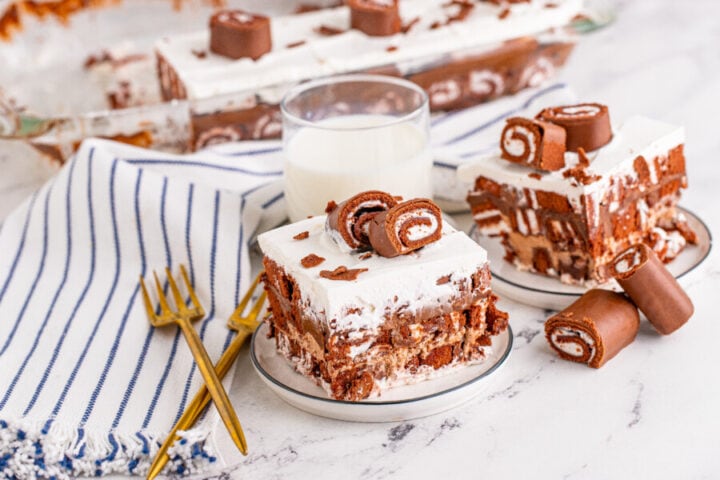 This Swiss Roll icebox cake has all the delicious flavors that we all love about Swiss Rolls but in a delicious cake form! The base is made from those delicious chocolate confections, then it’s topped with chocolate pudding, more little rolls, and finished off with whipped cream.

It’s a decadent dessert that no one seems to be able to get enough of. Eating this cake is like eating your childhood! It’s absolutely delicious, so easy to make, and it’s packed with as much nostalgia as flavor.

I love making this ultra rich icebox cake whenever I have the chance, and I know you will, too. That’s why I’m sharing all of this delicious goodness with you today. You’ll never look at cakes like this the same way again!

It only takes a few ingredients to create this super simple, super delicious recipe. You only need four ingredients to make this recipe, and you almost certainly have at least a few of them in your kitchen right now. Here’s what you’ll need.

That’s all there is to this list. I told you it was simple! It’s one of the shortest recipe ingredient lists that I have on the site!

Making this delicious icebox cake is as easy as grabbing the ingredients. There’s no baking involved at all – not even baking a crust. The “crust” or base of this recipe is simply Swiss Rolls! The entire recipe is simply a matter of mixing, layering, and chilling. You’ll find the complete recipe along with ingredients at the bottom of this post, but if you look at the recipe outline below, you’ll have a great idea of how incredibly easy it is to make this recipe.

That’s all there is to it! That’s the magic of an icebox cake like this. It only takes a few minute to create something that is so incredibly delicious that everyone begs for more. 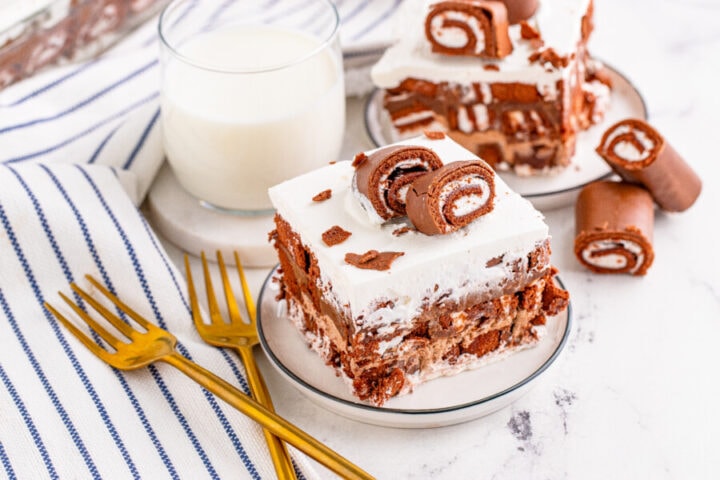 This is a super simple recipe that comes together so quickly and easily, you might there are no tips to mention, but there actually are. Sometimes, a recipe this easy actually requires a little know-how to pull it off beautifully, making it an amazing recipe rather than just a great one. This is one of those recipes. Take a look at these tips before diving into your recipe!

Use a Sharp Knife

The base of this recipe calls for Swiss Rolls that have been cut into pieces. To ensure that you get actual pieces instead of just smashed bits, be sure you use a sharp knife. I keen edge will help you create little Swiss Roll medallions that make the perfect base for this recipe. If you use a dull knife, you’ll just crush the rolls.

Do not rush the chilling process. You want to chill this cake for at least six hours and preferably overnight. When chilled thoroughly, it’s incredibly easy to cut this icebox cake into slices. If you don’t take the time to chill it enough, you’ll be spooning it out rather than cutting it out. Of course, if you’re into that, it’s totally fine. It tastes amazing, either way.

Serving this icebox cake is as easy as making it. All you have to do is cut a slice and put it on a plate! This cake might be made primarily with pudding and whipped cream, but it cuts surprisingly well if you let it sit long enough. This delicious dessert has absolutely everything you need in it already, so there’s no need to top it with anything.

This is the perfect dessert to serve for weeknight family meals, potlucks and get-togethers, holidays, and of course, hot summer days! 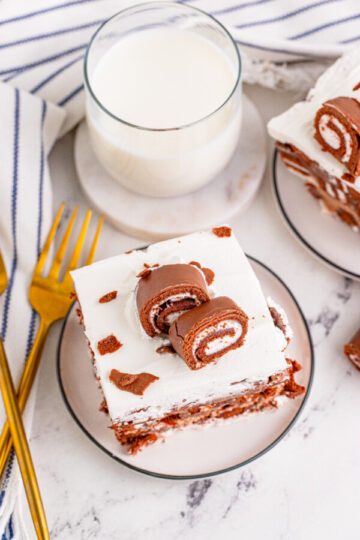 Give This Swiss Roll Lush Cake a Try

This delicious Swiss Roll lush cake is one of the easiest and tastiest icebox cake recipes you’ll ever make. It comes together so fast, and it’s an absolute explosion of creamy, chocolaty goodness in your mouth with every bite!

It’s so simple and so good, I can’t think of any reason that you wouldn’t want to give it a try. Get ready to be amazed and to make it far more often than you thought you would. This is the kind of recipe that will immediately end up in heavy rotation in your kitchen! 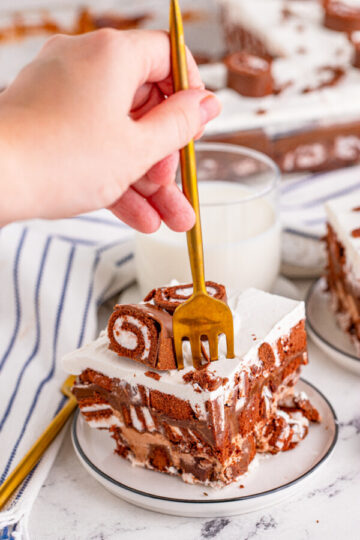 Other Cakes to Try 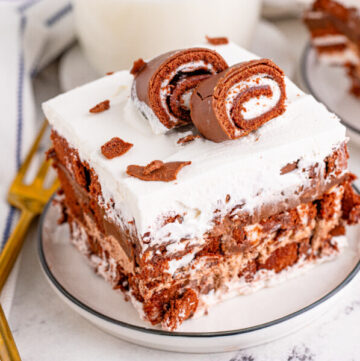 This Swiss Roll lush cake is one of the easiest, tastiest icebox cake recipes you'll ever make. It's always a hit, so give it a try!
Print Recipe Pin Recipe
Prep Time 20 mins
Course Dessert
Cuisine American
Servings 18

Keyword lush cake, swiss roll
Tried this recipe?Let us know how it was! 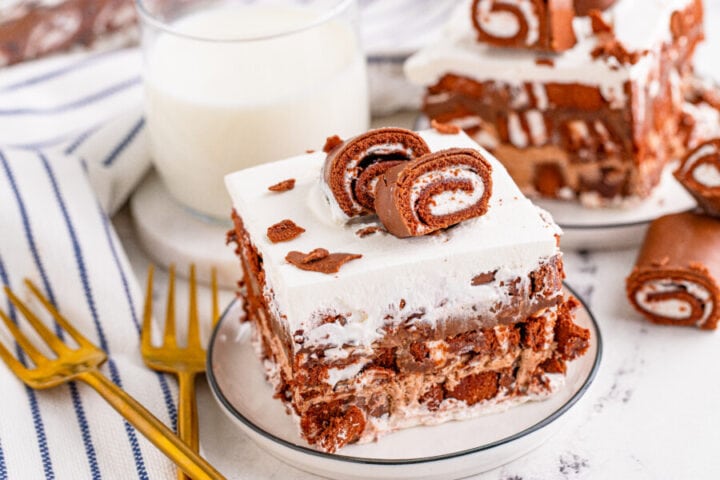