This recipe is so ridiculously easy, as long as you have a popsicle mold, there’s no reason you won’t be making this every day through the month of July. 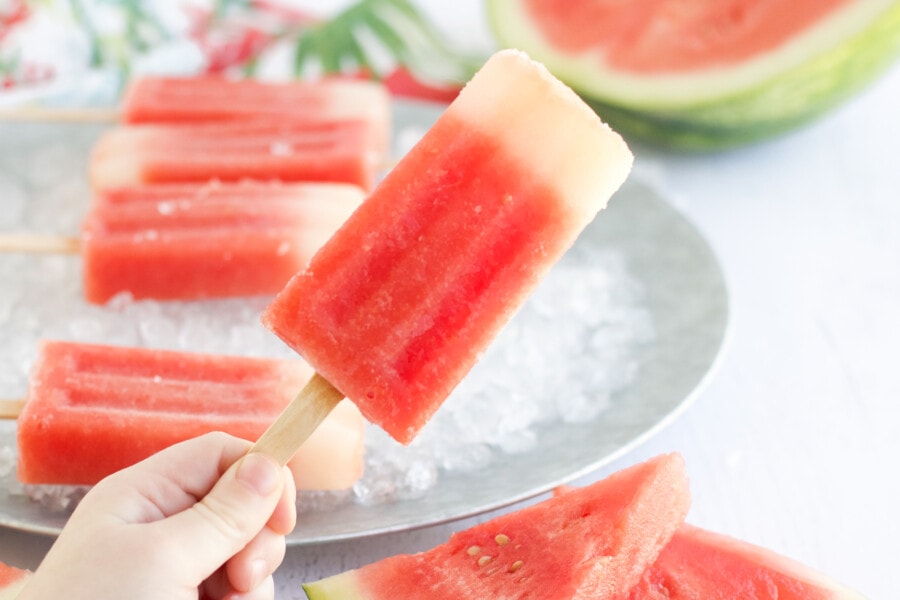 Watermelon is delicious. Popsicles are delicious. It only makes sense that we would put those two things together, right? But without the popsicle or the watermelon, we wouldn’t have this delicious frozen treat that I’m about to share with you. So let’s take a look at how these two ingredients came to be before we smashed them together into this tasty treat.

Frozen treats have been around for since time out of mind. As far back as ancient Rome, slaves were sent to retrieve blocks of ice from the mountains which were then crushed and served with fruit and spice syrup.

Famed explorer, Marco Polo, was introduced to sorbet when he traveled to China, visiting the court of Kublai Khan.

In that year, a boy named Frank Epperson who lived in Oakland, California accidentally left a glass filled with water, powdered soda mix, and a wooden stir stick outside overnight. It was a cold night, and the mixture froze.

The next day with Frank found it, he ran the glass under hot water and removed the frozen block with the wooden handle. After that first mistake, he knew he’d made something great and began making the pops for his friends.

Later, after he’d grown up and started a family, he made them for his kids.

Epperson filed for a patent on his creation in 1923. For years, he’d called them Eppsicles, but his children demanded that the name be changed to Pop’s ‘sicles. It stuck, changed a bit over time, and today, we call these frozen treats popsicles.

Epperson partnered with Joe Lowe Co., which allowed for broad distribution of popsicles, and they became an immediate hit, being popular treats at amusement parks, fairs, and the like.

Fast forward to today, and there are more popsicle flavors, shapes, and varieties than you can shake a stick at. This brings us to this new popsicle creation – Orange Julius popsicles.

As the name implies, watermelon is mostly water. It’s 92% water, in fact. Watermelon’s long history is over 5,000 years old, where its ancestor, a tough, drought-tolerant melon thrived.

No one knows the exact name of the plant, but what historians do know is that it was prized for its high water content. The indigenous people of the Kalahari Desert area used it for water, as well as roasting and eating the seeds. The flesh was incredibly bitter and was not eaten.

From there, watermelon found its way to Egypt. Ancient Egyptians immediately began to improve the melon, using cultivation methods to being producing melons with more palatable flesh rather than the bitter, almost inedible flesh of the original.

Here, the history of watermelon becomes murky, but we do know that it can be found referenced in medical books, recipe collections, and even the bible. By the 7th century, watermelon was being cultivated in India. B

y the 10th century, it was in China, and by the 13th century, it had made its way to the Iberia Peninsula. Around the 17th century, watermelon was a widely planted crop throughout Europe.

Those Europeans brought the melon to the New World as they settled, and today, watermelon is grown all across the United States, Canada, and many other countries across the globe.

Popsicles are pretty simple to make, but of course, it’s easier to buy popsicles at the store. So why make your own watermelon popsicles? There are a couple of reasons. The first reason is that you can’t always find watermelon-flavored popsicles.

It’s not the most widely available option. Even more importantly, when you make your own watermelon popsicles, you know what’s in them. You control the measurements and the ingredients you use. mainly the sweetener, but also you leave out additives like “natural flavor”.

I don’t want to throw anybody under the bus, but one brand that has more of a healthy image still has an ingredients list that is paragraphs long. There is no reason to include so much stuff in your popsicle.

When I see the word “real fruit” or “natural flavors” I run in the other direction. These store brands may add things like vitamin c or spotlight real cane sugar as though that’s a nutritional bonus, but don’t fall for it.

If you really want the kind of popsicle the marketers are trying to convince you they have, you have to make your own and this easy watermelon popsicle recipe is the perfect way to do it!

How to Pick a Watermelon

Particularly watermelon, which has very distinct skin and a thick rind. This brings us to the first tip in selecting the perfect watermelon: the rind. If the rind is too thick, it isn’t ripe enough.

The way to tell if the watermelon has a thinner rind is to knock on it and listen for a hollow sound. A ripe watermelon will also be heavier than It looks.

You can also very easily get a visual sense of whether a watermelon will be ideal. For starters, pick a round watermelon that is more ball-shaped than oblong. Those ones are sweeter.

You also want to pay attention to the striping. Look for clear stripes that show deep dark green and pale yellow. The striped pattern doesn’t need to be consistent though. You want to also see a big pale yellow spot where the watermelon ripened on the ground.

This is a good sign that the watermelon wasn’t picked too early and is ready to consume. Another sign to look for is the color of the stem. Green is not good, whereas brown is.

Follow these tips and you can be reasonably confident that you picked the best watermelon for your homemade watermelon popsicle recipe. 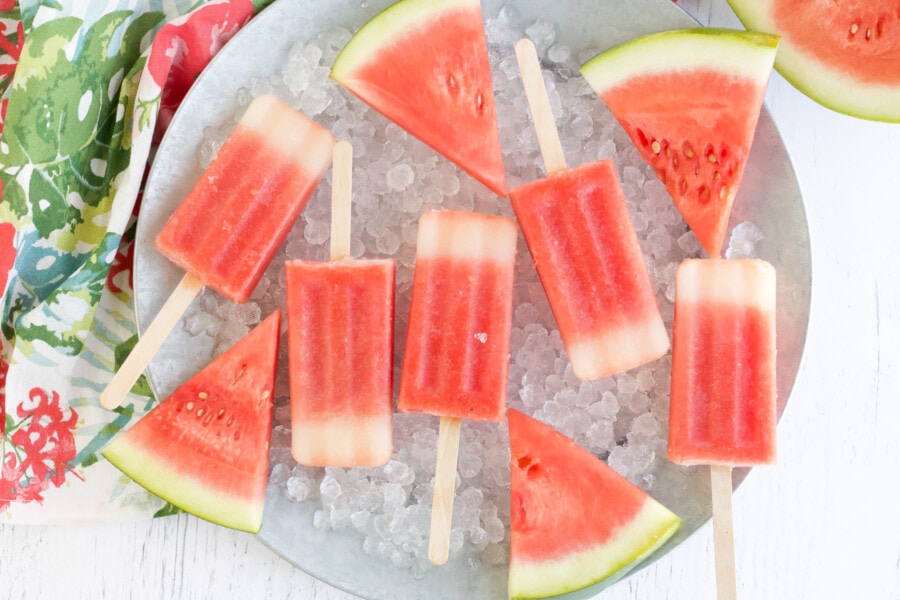 How to Cut a Watermelon Into Chunks

Cutting up a watermelon into chunks is fairly easy, but it is a bit of a process. If you haven’t done it before, it may seem like a mystery. Luckily, there are simple basic steps that you can follow to help you get the job done.

Make cuts length-wise from top to bottom through the skin all the way around. Then, starting with one end of the exposed side cut with a sharp, flexible blade along the rind.

Run the blade as close to the rind as possible to preserve the most flesh. rotate the watermelon and continue until all skin is removed.

Once you have skinned your watermelon half, place it flat side down on your cutting board and make a horizontal cut all the way through the middle from end to end. Then make 1-2 inch slices from one end to the other. rotate the cutting board and slice it again to make cubes.

How to Make Watermelon Popsicles

The good news is that making your own Watermelon popsicles is totally easy and uses very few ingredients. I use a very small amount of granulated sugar in this watermelon popsicle recipe, but if you prefer other sweeteners, you should substitute it the way you like.

For me, just regular white sugar does the trick. Another trick I have up my sleeve for this recipe is an equal amount of lime juice. That is, equal to the sugar. The lime juice balances the sugar and brightens up the flavor of the watermelon.

Watermelon has a very subtle taste, so the sugar and lime help to fill it out and give it just a little bit more of a candy quality.

It’s mostly chunked up watermelon that you puree and then pour into a mold. When it reforms as a frozen popsicle, it looks the same as did before you cut it up into bits. One of the fascinating things about watermelons is how close they always are to disintegrating.

I guess that helps them keep up appearances as you break them down and then put them back together.

Making simple popsicles from fruit with minimal ingredients is so rewarding. You can produce a tasty treat with only a small amount of effort and patience while you wait for them to freeze. It’s my favorite way to get my fruit servings on a hot summer day.

Kids love ice cream but these frozen treats are perfect on a hot summer day. You’re going to LOVE this homemade popsicle recipe. These watermelon ice pops are the perfect summer treat. 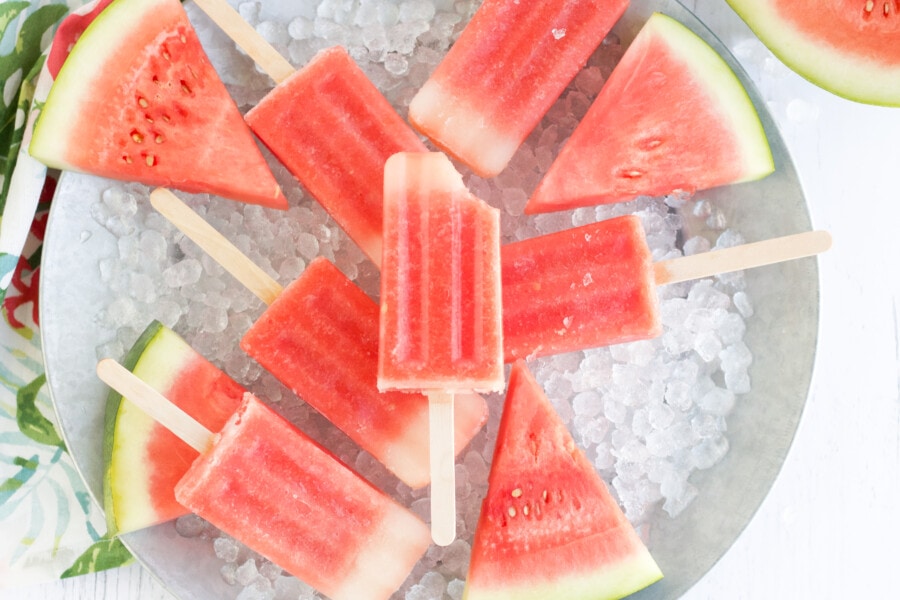 How to Make Watermelon Popsicles

1. Cut the watermelon and combine it with lime or lemon juice and sugar in a blender.
2. Pulse a few times before moving to a full blend until a smooth puree consistency is achieved. Adjust the amount of lemon or lime and sugar to suit your taste before putting it inside the mold.
3. Pour into popsicle mold and make sure all of the popsicles sticks are secured in your silicone or plastic mold.
4. Freeze for at least 5 hours or overnight before removing from molds. 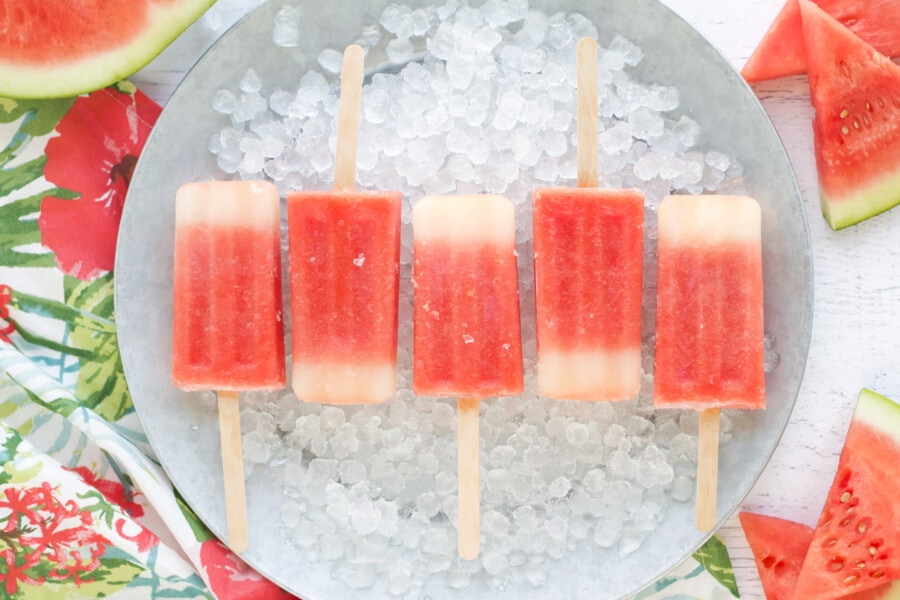 I have to mention that I have tried these watermelon popsicles with fresh strawberries in them as well and boy oh boy did I wish I tried them sooner.

I never knew until that moment that making homemade watermelon popsicles could be even more fun!

What a wonderfully refreshing change and I urge you to consider trying to add other fruits with the watermelon as well. Strawberry watermelon popsicles are terrific.

We made popsicles with watermelon strawberries and some whole blueberries inside and they disappeared lightening fast. I have to admit I wish I could have eaten another.

Besides strawberries, I encourage you to try any and all of the following fruits at one time or another. Just keep your fresh fruit total to 6 cups. These are the fruits we have tried but there are so many more to try!

Try This Watermelon Popsicle Recipe and Feel the Refreshment

This delicious watermelon popsicle recipe is absolutely delicious and so easy to make. That’s the perfect combination if you ask me. Whip up some of these delicious frozen treats for the hot summer months and watch your family clamor for more. With a recipe this delicious and easy, there’s no reason not to give it a try. 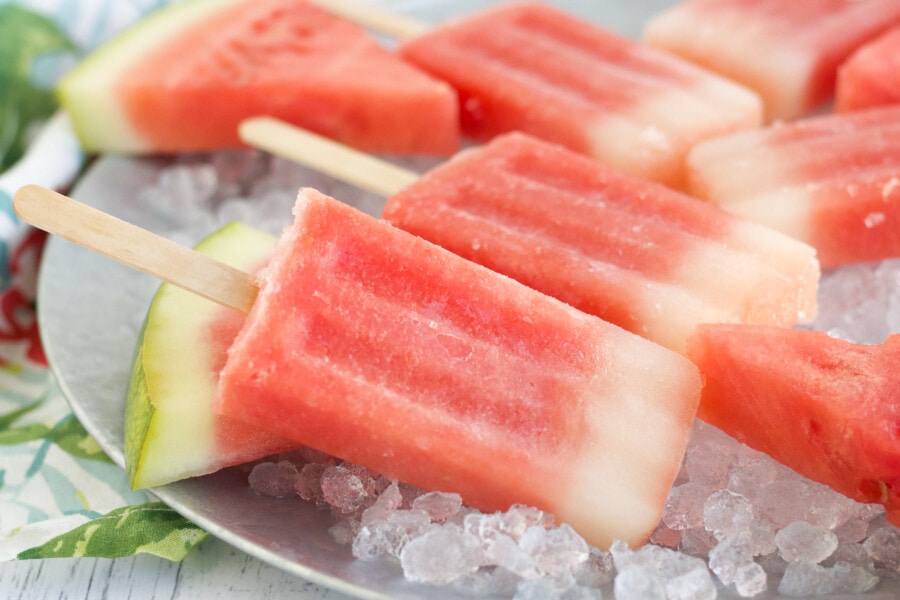 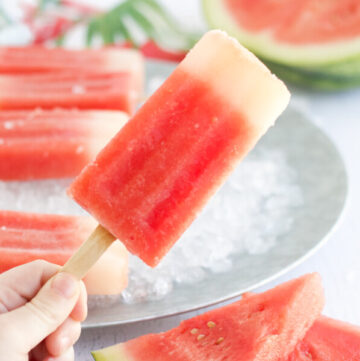 How to Make Watermelon Popsicles - Homemade

It's hard to do much better than pure watermelon when you want sweet and refreshing, but not if you are making a homemade watermelon popsicles recipe.
Print Recipe Pin Recipe
Prep Time 5 mins
Freeze Time 5 hrs
Total Time 5 hrs 5 mins
Course Dessert
Cuisine American 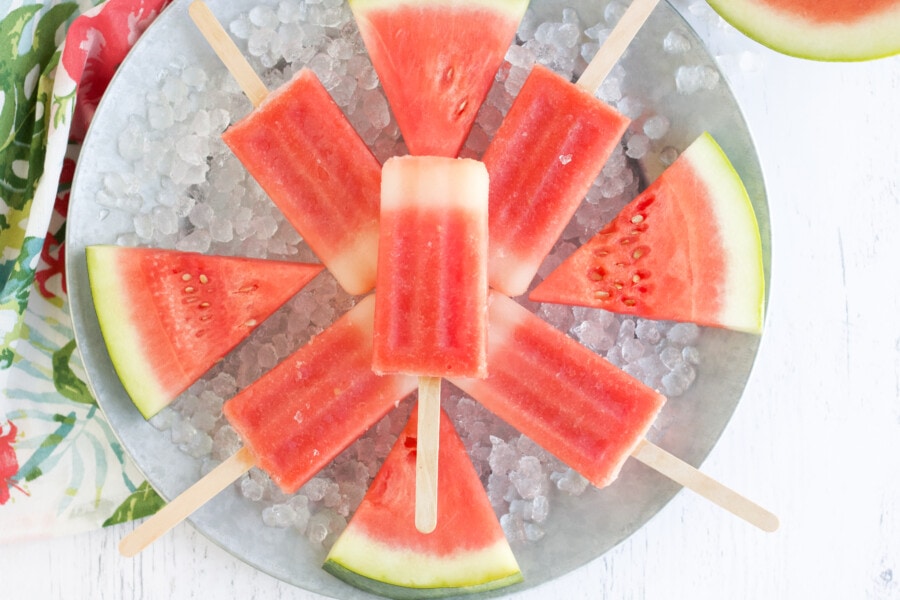