This copycat Taco Bell chicken chalupa supreme has all the flavors we love about the chain version, but it’s even better! This chicken chalupa recipe uses real, fresh ingredients to deliver flavors that are far more authentic than the Taco Bell version and even tastier, if I do say so myself. 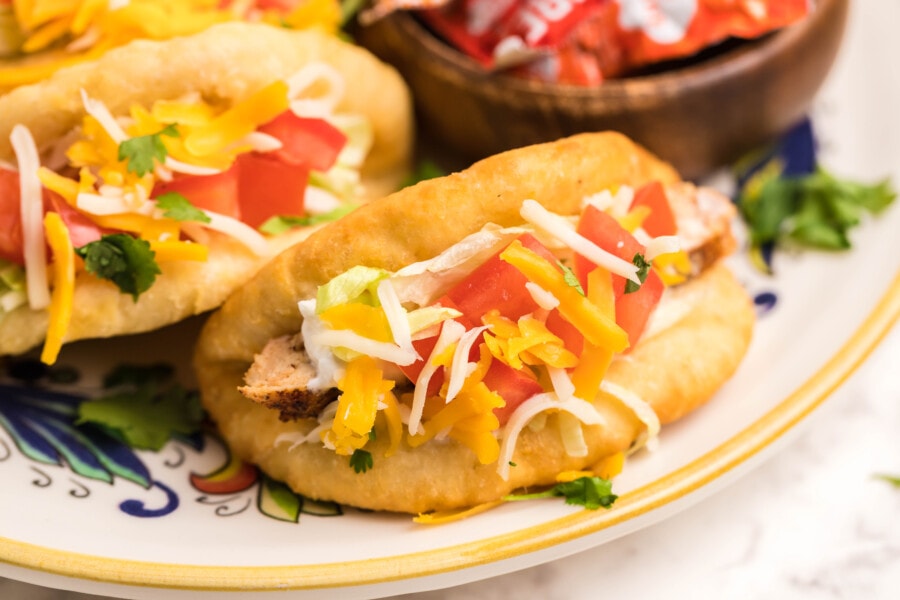 I’ve been a fan of Taco Bell as far back as I can remember. Years ago, my husband and I used to spend about $50 and bring home 3 or 4 big bags full of many different kinds of burritos and tacos.

I would set them all up on our dining room table in piles on plates and platters and game day or with UFC game night would begin.

I did not do any cooking or baking at all. Clean-up could not have been easier.

Now, however, we want more control over ingredients, and frankly homemade always tastes better. This Copycat Taco Bell Chicken Chalupa Supreme recipe is worth the effort.

Buying or going through a drive-thru is definitely easier and faster but these chalupas taste so much better. You’ll make them over and over again.

This flatbread is prepared and filled with seasoned meat of choice (or beans,), sour cream, fresh shredded lettuce, a blend of cheeses, and fresh diced tomatoes. 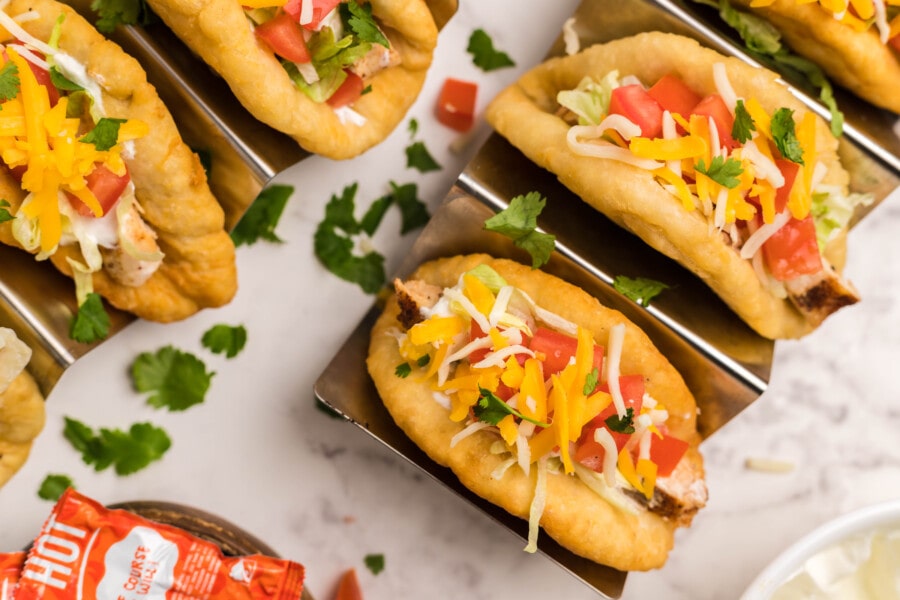 This chicken chalupa recipe is absolutely delicious, but without two things we wouldn’t have it. First, of course, is the invention of the chalupa itself – which, by the way, is not a Taco Bell brainstorm.

The second is Taco Bell itself. Because while many authentic Mexican restaurants offer chalupas, most of us know the dish from its Taco Bell fame.

As you know by now, I’ve gotten into the history of food, so let’s take a look at both the chalupa and the fast-food chain that skyrocketed it to national fame.

The chalupa is a tortilla-based dish from Mexico. It’s like a bigger, thicker version of a hard shell taco. Food historians think that chalupas originated in the south-central region of Mexico somewhere around Hidalgo, Puebla, Guerrero, and Oaxaca.

They’re made by pressing a thin layer of masa dough around the outside of a small mold which creates a container resembling the boat from which it gets its name.

The real history of chalupas is shrouded in mystery. Food historians know that the first written mention of them dates back to 1895, but it’s believed that they’re far older.

They can’t say for sure, but most food historians believe that the dish dates back as far as pre-colonial times.

Unlike its Mexican namesake, the Taco Bell chalupa is a thick, fried tortilla shell fill with a variety of ingredients that you won’t find in an authentic chalupa, as the real deal is only filled with salsa, cheese, and lettuce.

The history of Taco Bell is short but interesting. For example, did you know that Taco Bell was born from a hot dog stand? It’s true!

Mitla Cafe was famous for its hard-shelled tacos. See the opportunity in the tacos’ popularity, Bell attempted to replicate the recipe, with the owners eventually allowing him to watch how the tacos were made.

In 1951, Bell took what he learned and opened a new taco stand. He tried several names like Taco-Tia and El Taco before finally settling on Taco Bell. Finally in 1962, he opened the first official Taco Bell.

The restaurant gained popularity quickly, with the first franchisee opened in 1964. By 1967, the restaurant chain had expanded to 100 locations. Finally, Taco Bell went public with 375 restaurants in 1970.

Over the years, the chain grew from offering traditional hard-shelled tacos to the vast variety of options we see today. No longer a true Mexican restaurant but no less popular, Taco Bell serves up all kinds of Mexican-inspired recipes today.

How to make a Taco Bell Chicken Chalupa Supreme

Let’s be real – Taco Bell makes a killer menu. So many good flavors and so many fun recipes. This got me thinking that this was something that I could easily do at home.

Low and behold, I was right. (as I typically am – just ask my husband lol) And once I realized that a copycat recipe was fairly simple and easy to do, I couldn’t wait to share this simple copycat Taco Bell supreme recipe with all of you. 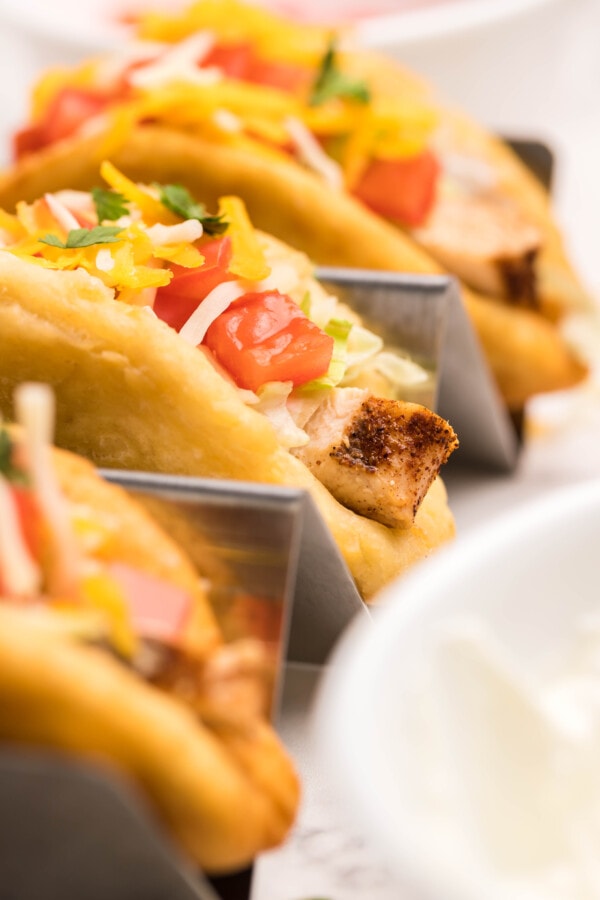 All you need is the list of ingredients below to get started. You’ll find that this delicious recipe isn’t hard to do at all! Aside from the chalupa ingredients, the filling ingredients are pretty much standard chicken taco fare. 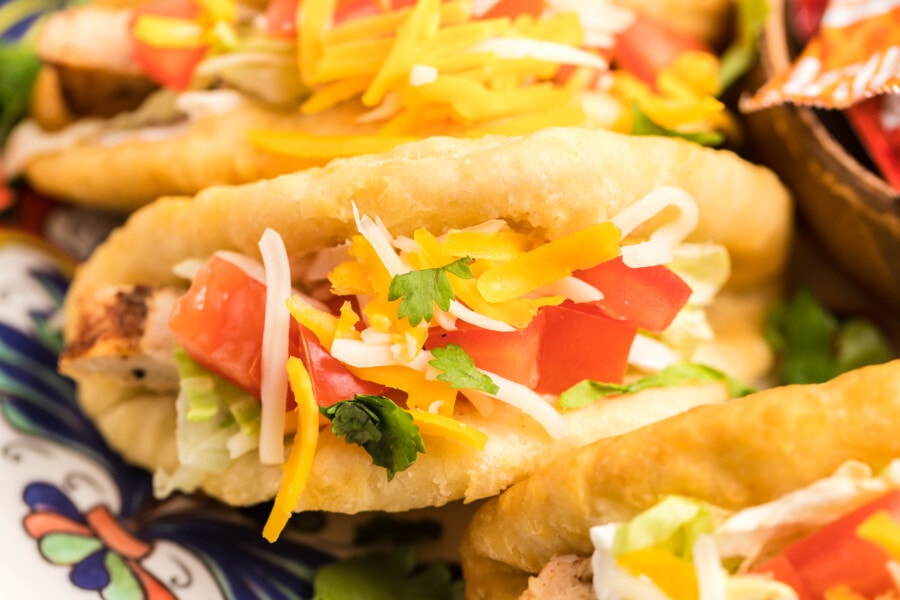 Making this chicken chalupa recipe is fairly straightforward. Both the chalupa and the chicken are easy to make and only require a few steps. It’s a recipe that looks so much more involved than it actually is. The best ones are always like that!

Mix paprika, garlic powder, chili powder, and cumin together in a small bowl. Season both sides of chicken with this mix. Heat 1 tbsp olive oil in a separate skillet over medium-high heat. Once shimmering, add the chicken to the pan and cook 5-7 minutes per side, or until the internal thermometer reads 165* Let the chicken rest for 5 minutes, then slice into thin strips. Set aside.

Dice tomatoes and add to a bowl. Add lettuce, sour cream, and cheese to separate bowls.

How to make Chalupa Shells

In a few simple steps, your chalupas will be ready!

Add 2” of canola oil to a large skillet and heat to 350 degrees.

In a large mixing bowl, add the flour, baking powder, salt, and shortening. Use a fork to mix the ingredients together. Add the milk and use your hands or a wooden spoon to mix to form a dough ball.

Hold the chalupa into shape until it starts to turn light gold, about 30 seconds.

Flip over to cook the other side for 30 seconds.

Remove from oil and place on a paper towel-lined plate. 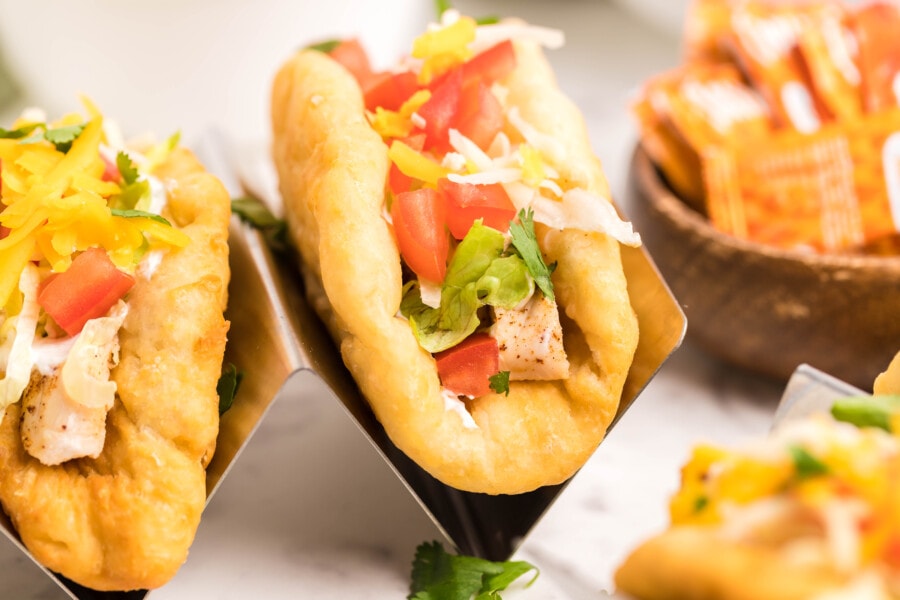 Prepare chalupas, Add chicken, sour cream,  lettuce, tomatoes, and a pinch of cheese into each shell.

Garnish with cilantro and serve with your favorite hot sauce. Enjoy! 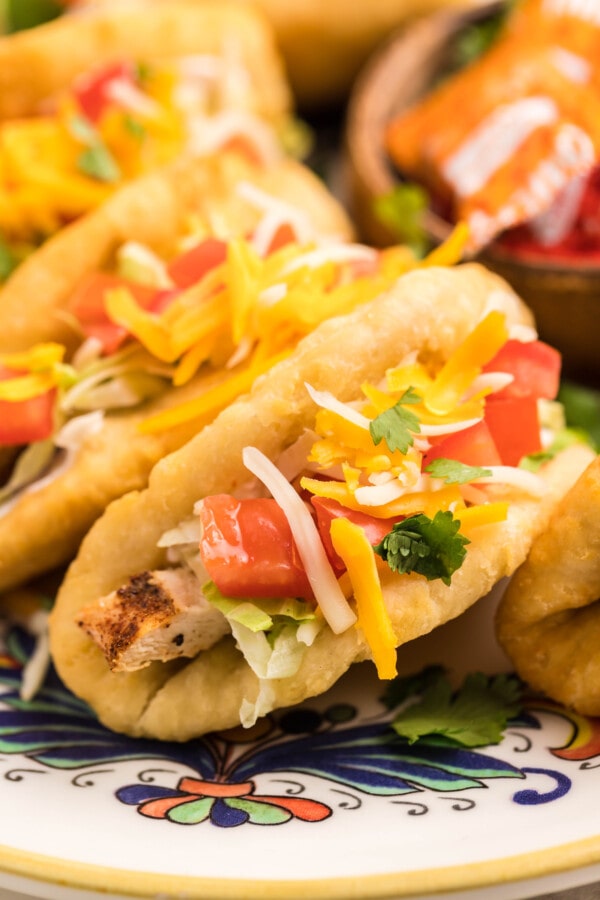 Can you freeze chalupa shells?

I wouldn’t recommend it. The reason being is that these need to be served fresh and hot. This is where they get their flavor and hold their shape. Since they don’t take long at all, just plan on making them fresh.

What other toppings can you add to chalupas?

Anything you want. To stay true to the copycat, add the toppings in the recipe but if you want to vary, have fun. Some other delicious topping ideas include:

And more. Put on whatever toppings that you want and make it your own!

We love to make these on a monthly basis. They’re just too good not to. I’ve been making them for years and I’m certain that by now Taco Bell is missing our business by now lol.

I have to admit that I actually prefer these better than anything that I can buy at the restaurant because I find them less greasy and more crispy. I love the way that they crunch and hold all my toppings and meat just right.

Fresh and homemade is always better! 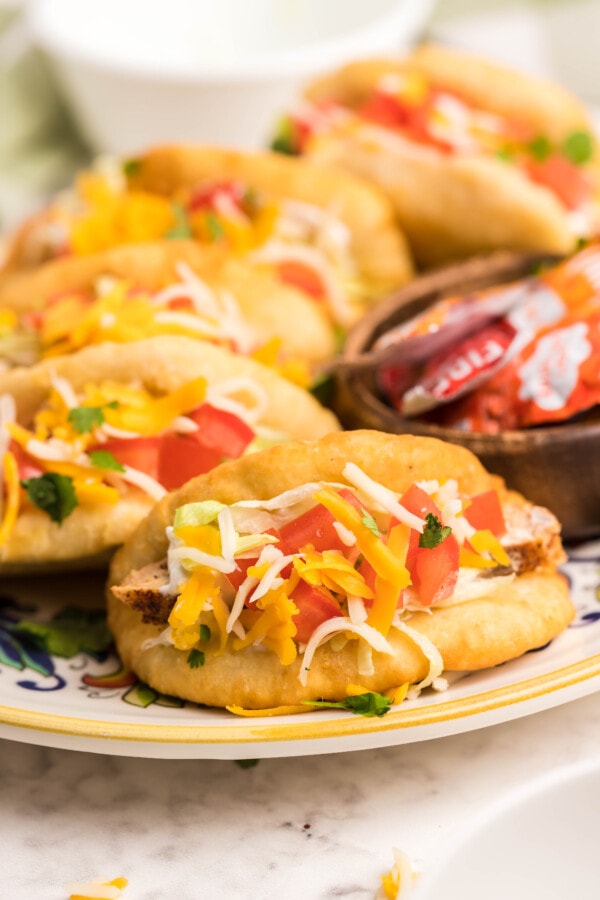 Give This Copycat Chicken Chalupa Supreme Recipe a Try

This chicken chalupa recipe is absolutely delicious and far easier to make than you’d think. Filled with all the flavors we love in the Taco Bell version but even more delicious, this copycat chicken chalupa supreme recipe is bursting with flavor and texture, and it’s always a big hit.

With a crispy, doughy shell cradling delicious, tender chicken and all the taco fixings, it’s a bit of Mexican heaven in every bite. Give this recipe a try, and I know you and your family will absolutely love it.

If you’re looking for even more great Taco Bell copycat recipes and all things Mexican flavored, don’t miss out on these. You’ll have enough recipes to last you for months! 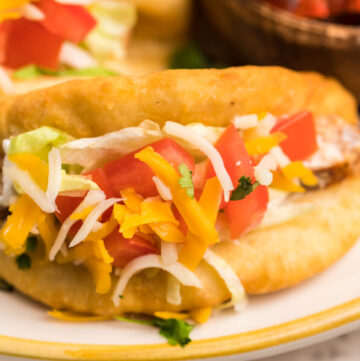 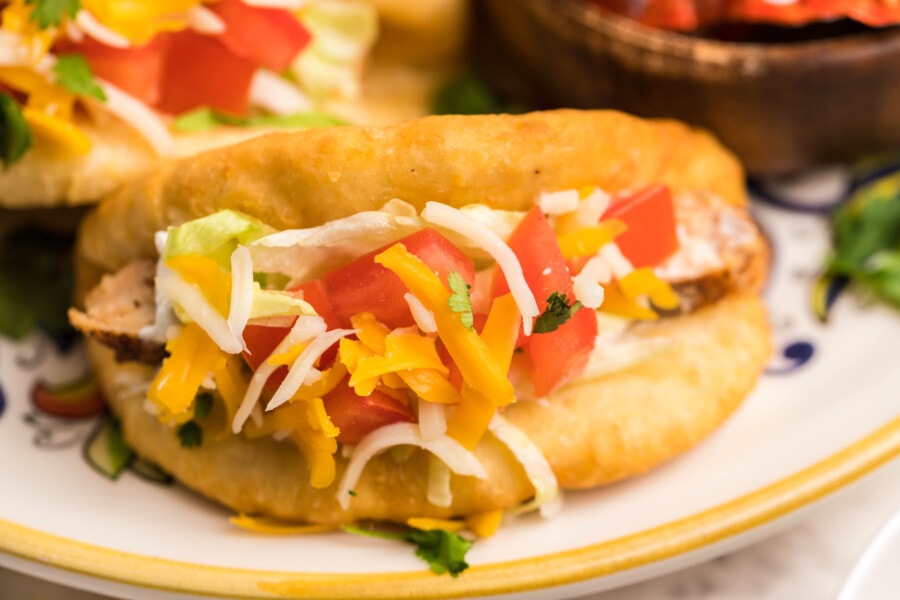