This smoked bologna recipe takes plain bologna to a place you’ve never been before. Slow smoked for hours, this bologna is crispy on the outside, juicy on the inside, and features the perfect combination of smoke and classic bologna flavor.

Bologna has been a go-to lunchmeat for my family for as long as I can remember, but after I met my husband, Ken, I discovered it all over again. Ken smokes it, and it’s absolutely amazing!

This was inspired by my smoked hot dogs recipe on this site, and pairs well with these amazing smoked baked beans. Ken immediately thought that if we could smoke hot dogs we could smoke bologna, and he was right. It’s so good on a sandwich with the baked beans as a side!

We have this recipe for smoked bologna along with a homemade barbecue sauce recipe, as well. It only takes a handful of ingredients for the bologna and just a few more to make the barbecue sauce.

For the Barbecue Sauce

See the recipe card at the end of the post for quantities.

It only takes a few simple steps to make both the smoked bologna recipe and the accompanying barbecue sauce. The hardest part of this recipe is waiting for the bologna to finish smoking!

Score the entire bologna with a pairing knife about a half-inch deep every inch both horizontally and vertically. Then, bush the entire thing with mustard and sprinkle it with barbecue rub.

Fire up your smoker or grill to 225 degrees, adding chunks of soaked wood chunks when the grill or smoker comes to temperature.

Whisk the ketchup, molasses, vinegar, Worcestershire sauce, mustard, and pepper together in a bowl. Then, heat oil in a medium saucepan over medium heat until it’s shimmering. Add the onion and garlic and cook until the onion is softened.

Add chili powder and cayenne and cook until fragrant, then whisk in the ketchup mixture and bring it to a boil. Reduce the heat and simmer over medium-low heat for about five minutes.

To make your barbecue bologna sandwiches crispy, prepare the grill with a charcoal chimney, pouring out evenly when the ashes are coated and gray. Oil the grilling grate to prevent sticking, then grill the bologna slices until browned and crisp on both sides – about two to three minutes per side.

Place a slice of your smoked bologna – regular or crispy – on a roll and then top with the barbecue sauce. Serve with your favorite barbecue sides!

Hint – When preparing the grill for making crispy bologna slices, let it come to temperature and preheat with the lid on for five minutes to ensure proper cooking.

Don’t have the correct ingredients on hand or want to change something up? Here are some helpful tips for you to change this smoked bologna recipe

Want to personalize this smoked bologna recipe? Here are some of my tried and true tips for changing up this recipe.

If you love recipes like this, you may also enjoy this smoked eye of round.

It takes very little equipment to make this recipe, even if you make the barbecue sauce to go with it. You’ll only need basic kitchen equipment along with your grill or smoker.

For the Smoked Bologna

For the Barbecue Sauce

You can store this bologna in the refrigerator for three to four days in an air-tight container or up to three months in the freezer.

Both the smoked bologna and the barbecue sauce are incredibly easy recipes. That being said, even easy recipes have their little tricks, and that’s what I’m sharing below.

Where do I find uncut bologna?

It’s at any grocery store with a deli. Just ask for the poundage you want unsliced. Remember those slices have to come from somewhere.

How long will this bologna last?

This will last in an air-tight container for three to four days in the refrigerator. You can also freeze it for up to three months.

How do I freeze bologna?

Wrap the leftover bologna in plastic wrap and then again in foil. Then, store it in an air-tight, freezer-safe container or heavy-duty freezer bag.

What can I serve with these bologna sandwiches?

This classic smoky flavor works well with any of your favorite barbecue sides like baked beans, macaroni and cheese, coleslaw, and the like.

What can I do with smoked bologna?

In addition to making these delicious sandwiches, you can fry it for breakfast, cut it into chunks for chili or baked beans, add it to charcuterie boards, and more. It’s a great addition to so many foods.

Ready to get cooking? Remember that you can print this recipe if you would like. 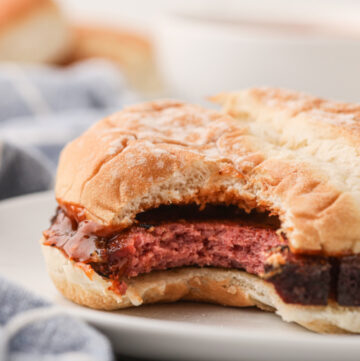