This zesty ranch oyster crackers recipe is the perfect semi-homemade snack! Ranch seasoning mix, Italian dressing, dill, and red pepper are combined with your favorite oyster crackers to create a snack that’s packed with zingy heat that can’t be beat. 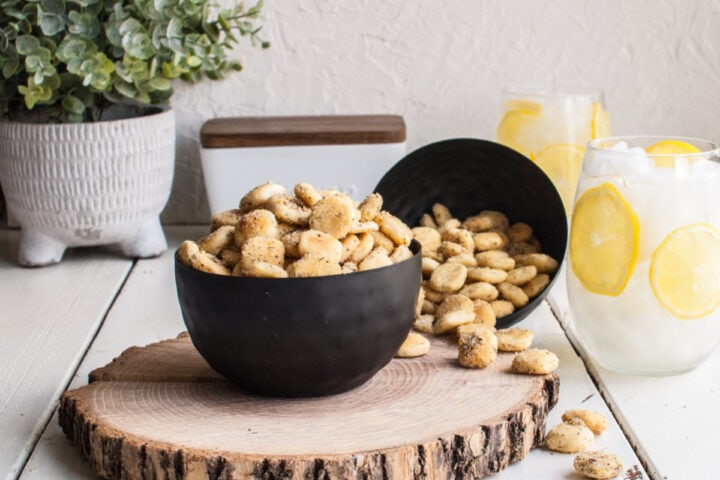 I love oyster crackers? Who doesn’t? They’re great in soups. They’re great for keeping in a bag and snacking. They’re just tasty little treats all the way around. They’re so simple, but they really satisfy.

I’ve been using oyster crackers in my soup for as long as I can remember. I don’t like using regular saltines because they just turn to mush. When you put them in your soup, you end up with a soggy blog rather than another interesting flavor and texture. That’s not the case with oyster crackers. They really hold up, so you get a sort of subtle crouton effect that I really like. I love putting them in all kinds of soups and even stew for a little something extra.

For years, that was the only way I made them, but then I came across a recipe for zesty oyster crackers. It’s actually a sort of a snack mix when you think about it. The crackers are coated with a mixture of ingredients that make a spicy, zesty flavor. They’re great in soups, as a snack, or as an ingredient in snack mix.

There are lots of ways to use them, and they all work so well! Since I found this recipe, I’ve been making it quite often, and my husband and I can’t get enough of it. Neither can my family and friends. I bring them to special events, and my husband and I even have them as a snack when we watch movies! 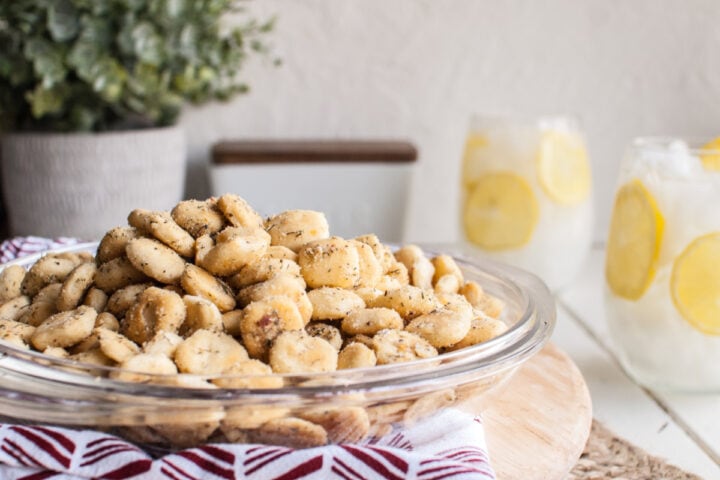 I love food. I love eating it and learning about it. I’ve gotten on a big history kick over the past few months when it comes to food, and it’s been so fascinating. You would not believe some of the history behind our favorite foods.

We love so many kinds of foods, but we know nothing about them. That’s why I love including a little history into my posts. Because oyster crackers are a variation of crackers, I’m going to take a quick trip into yesteryear and discuss the history of both crackers and oyster crackers.

Crackers are actually the evolution of hard biscuits called hardtack. The first cracker – which was simply hardtack back then – was made in 1792 by John Person in Newburyport, Massachusetts.

Pearson was attempting to make a new type of biscuit that would last longer than the traditional sailor’s biscuits of the time. After several attempts, he eventually mixed only flour and water together, baked the mixture, and called it “Pearson’s Pilot Bread”.

His new bread eventually ended up being called “hardtack” or “sea biscuits”. This new biscuit became an incredibly popular item among sailors due to its long shelf life, allowing them to keep food on hand without the worry of spoilage.

Although Pearson’s invention is the first known “official” type of cracker, most food historians agree that such a simple recipe of flour and water was probably made long before then, as early foods were of that rudimentary ilk.

The history of oyster crackers is disputed. There are two conflicting claims to fame when it comes to the origin of these little crackers. One story goes that the first oyster crackers can be traced all the way back to 1847. In this version, Adam Exton, the owner of New Jersey-based Cracker Bakery, is credited with their invention.

However, The Westminster Cracker Company of New England disputed that claim, asserting that they came up with oyster crackers about twenty years earlier in 1828.

Today, these crackers are often used as a topping for clam chowder, seafood stew, tomato soup, and Cincinnati-style chili. You also might hear them referred to as water crackers, Philadelphia crackers, and Trenton crackers. 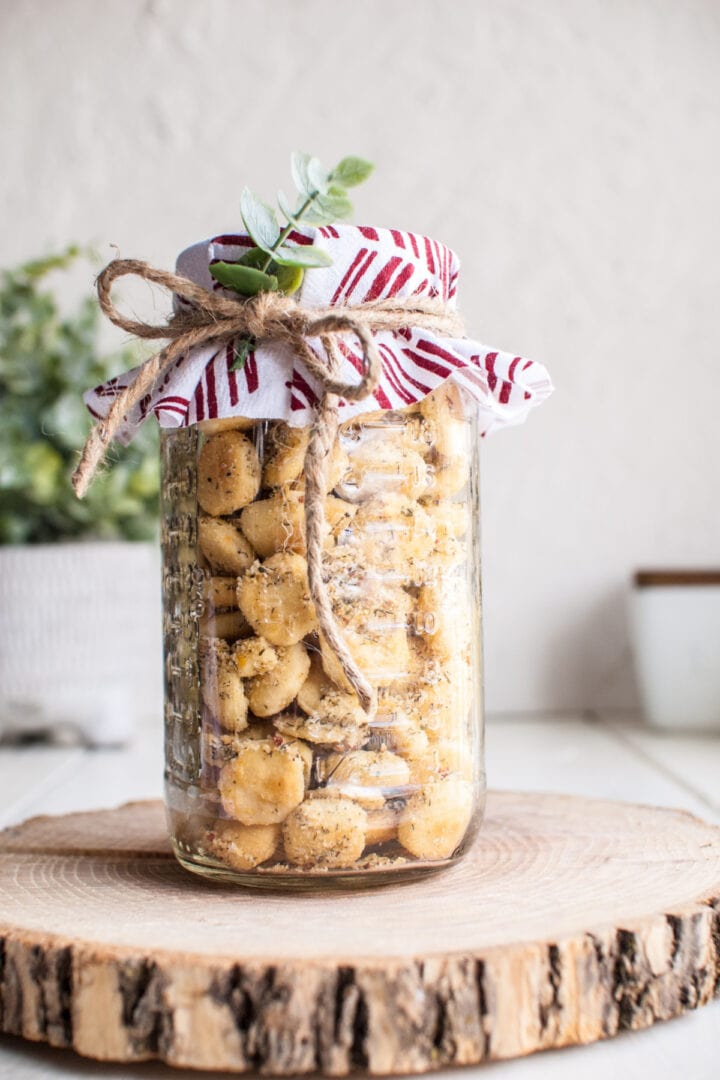 These zesty oyster crackers are absolutely loaded with flavor, but they don’t take loads of work. This ranch oyster crackers recipe comes together in no time, and when it’s all said and done, you have a great snack or zippy addition to your favorite soups and stews.

The ranch and Italian dressing add a kick of flavor, while red pepper flakes add a kick of heat. It’s all counterbalanced by the mellow flavor of the dill, creating a flavor profile that is so good with almost anything you pair it with.

It only takes a few ingredients to make these delicious crackers. Because it’s semi-homemade, you won’t have to look for anything special at all. You don’t even have to worry about flour!

You most likely have all of these ingredients in your kitchen, and if you don’t, you can easily find them at literally any grocery store anywhere. Here’s what you’ll need.

That’s all there is to it! You only need a handful of ingredients to make a delicious snack that you’ll be eating by the handful.

Making these zesty oyster crackers is a breeze. The entire process is mostly a matter of mixing ingredients and then coating the crackers. After that, you simply bake them for a few minutes, and you’re all done! It couldn’t be easier.

See? That was pretty simple, right? This ranch oyster crackers recipe is a fantastically easy recipe that just explodes with flavor, and you’ll be done in a jiffy. 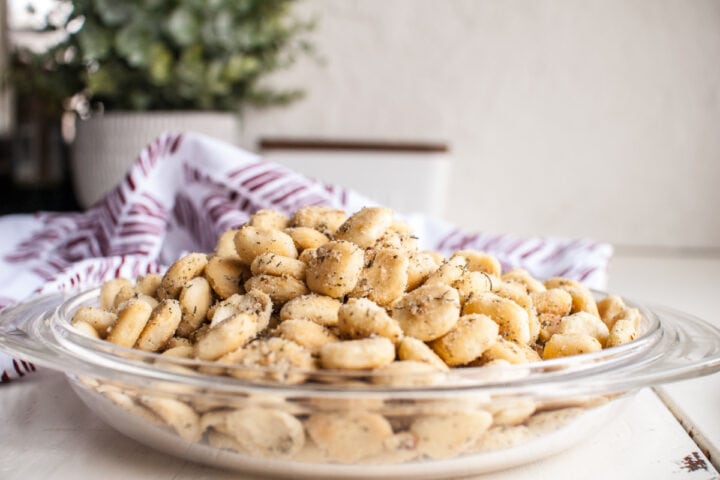 You can change up this recipe in a few different ways if you’re so inclined. You don’t have to married to the idea of a certain size of oyster crackers. They come in various sizes, and they all work well with this recipe.

Use your different-sized crackers for different dishes like soups, stews, or snack mixes.

If you don’t like heat, simply leave out the pepper flakes. You’ll still get all of the great flavors of this recipe. You just won’t get all the heat. Hey, some people don’t love the feeling of their mouth on fire the way my family does!

Serving these zesty oyster crackers is the best part of the entire recipe! They’re so good on their own, but you can also put them in soups, stews, chowders, and chilis. Another fun way to use these crackers is to use them as part of a larger snack mix.

For example, you could make a trail mix and add some of these crackers to it.

If you’re bringing these crackers to an event – which is another great option, by the way – consider packing them in a large tin or a serving dish that’s on the deeper side. Bring along a large spoon and let everyone take as many or as few as they like!

Another wonderful way to serve these crackers is as gifts! Package them up in a mason jar or a clear snack sleeve tied off with a string, and you have a great gift for birthdays or the holidays. These crackers are so good, they make a fantastic gift for any foodie.

These ranch oyster crackers will keep well in an air-tight container at room temperature for a week or two. Only make as many crackers as you can eat in that time period because you can’t freeze them.

Freezing these crackers changes the texture and dries them out. So just be prepared to eat them all when you make them. I know, I know. It’s a total bummer, right? 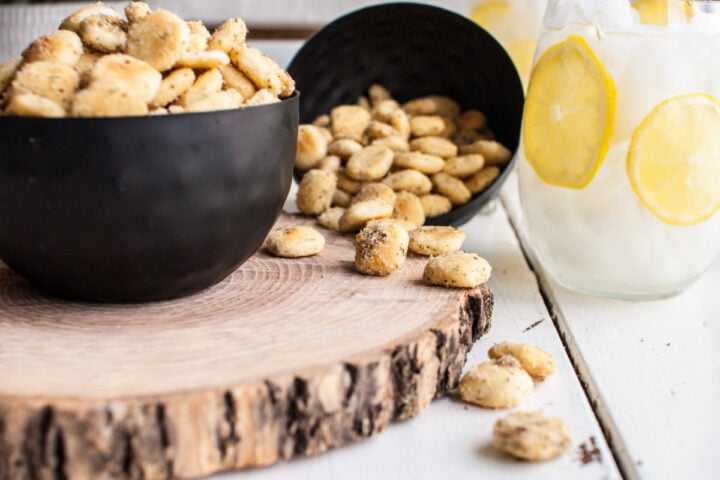 Try These Ranch Oyster Crackers for Yourself

The best part about this oyster crackers recipe is how versatile it is – outside of how delicious it is, of course.

Give this recipe a try, and I know you’ll love it as much as I do. You’ll find yourself looking for reasons to make it again and again! 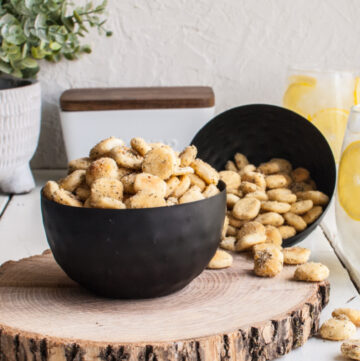 This zesty ranch oyster crackers recipe is so simple and so delicious. This oyster cracker recipe is full of flavor and great in everything.
Print Recipe Pin Recipe
Total Time 20 mins
Course Appetizer, Snack
Cuisine American

Tips
This recipe is easily doubled!
Different brands of oyster crackers can be different sizes, any size will work.
If you prefer less spicy foods you can omit the red pepper flakes.
These make great gifts! Package them up in a mason jar or clear snack sleeve tied off with string and you have
a great snack to gift! 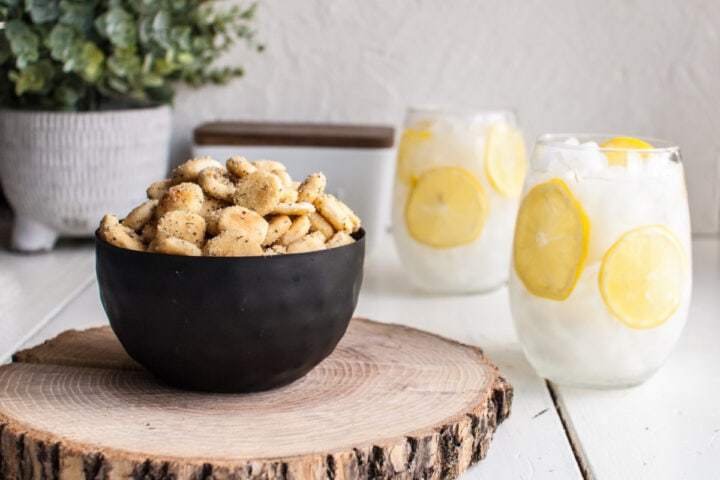