This ramen chicken noodle soup recipe has everything you want in an Asian chicken soup you never thought of or imagined. Pay close attention to how the flavors traditionally used for each kind of soup are combined to make a very special version of two classics!

Chicken soup was the cure-all meal. A hot bowl to warm and soothe me when I didn't feel well.

Chicken noodle soup is a comfort food staple and practically an over-the-counter medication during the cold and flu season. So it's no wonder I gravitated to this classic recipe, even though there are so many variations on it, both subtle and not-so-subtle.

On the other hand, I cannot get enough ramen. Ramen noodles are a common symbol of the independence of young adulthood. In that way, it serves as a fitting antithesis to classic chicken noodle soup.

When you take the traditional flavor and elements from both types of cuisine, you end up with a truly magical Asian chicken soup that's a synthesis of the two opposing states—each one promoting its own theme and melding with the other.

That might be a little too psychological, but there are some foods that are very psychologically driven as I believe both of these soups are. Because of that and my equal love for both types of soup, I had to meld these two soups together into this ramen chicken noodle soup recipe and see if the taste matches the concept.

I think it does.

What is Ramen Broth?

Ramen, and the broth with which it's made, is widely thought to be a Japanese dish, but it actually originated in China in the 19th century. In reality, Ramen is an imported dish to Japan that didn't gain wide popularity until the 1950s.

Ramen was actually a popular black market food item in Japan in World War II when food rations were in their most strict phases. Well, the wheat used to make the noodles were actually purchased on the black market.

This concludes my exceptionally short historical lecture on ramen. On to the broth, which is a key player in this Asian chicken soup fusion dish.

When you think of ramen broth, you may think of simple chicken stock. Or maybe those little flavor packets that come in the instant ramen packs come to mind.

However, ramen broth is actually a very specific type of broth. It's important to the ramen aspect of this dish in order to achieve the appropriate synthesis of soup styles in this recipe.

Ramen broth comes in four types. The three flavors of ramen broth are essentially soy, salt, and miso (from fermented bean paste). The fourth variety has a fatty base to it.

It's called tonkatsu and it traditionally comes from simmered pork bones, but you can use chicken as well. The salt, or Shio, flavor is the most transparent and lowest in fat. It's the furthest from the viscous creamy mixture of tonkatsu broth.

The most available ramen broth is going to favor kelp stock and includes ingredients such as soy milk and mushrooms.

A 32-ounce carton of ramen broth at the store favors simplicity and relies on us to make the enhancements, which is perfect for what we are trying to do with this delicious ramen chicken noodle soup recipe. 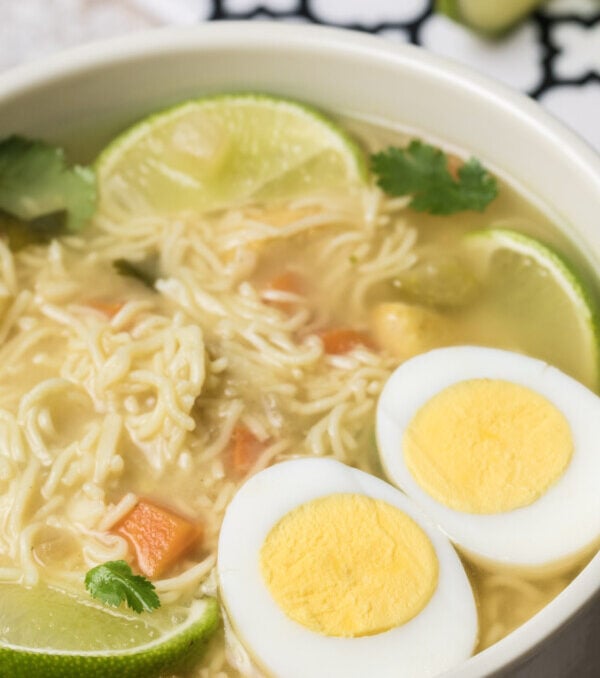 When most people think of ramen broth they think of one thing. sodium. It's true that some ramen broths are very high in sodium, but this is not always the case.

There are also numerous other health benefits of ramen broth that don't often get brought to light. While there are varieties high in fat content, it's important to know that others are relatively low in fat.

Sodium is also not necessarily as high as you might think, making up only about a third of the recommended daily value.

Ramen broth does contain some nutritious vitamins and minerals you may not consider. Phosphorus and potassium are two examples. While the values for these minerals are somewhat low percentage-wise, it's important to look at these values in context.

This is broth, not a meal. So these values can only enhance healthier meals such as a hearty chicken noodle soup. From 2% calcium to 4% for other important nutrients including magnesium, as found in Ocean's Halo Organic Broth (one of the most common ramen broths) there is a noticeable benefit, including vitamins D, B-6, B-12, and E.

How to Boil an Egg for Ramen

Boiling an egg is deceptively easy. It's one of those things that once you know there's a trick to it, you can nail it every time without an issue. Unfortunately, if you don't have somebody to teach you how, you may over or under-do it.

Then there is the tough task of peeling the egg when the shell is stuck to the whites. Take the guesswork out of boiling an egg. Here is the quick guide to getting the perfect hard or soft boiled egg.

Hard-boiled eggs are most common because people think they are easier. However, with ramen, most eggs you see are soft boiled. You can do it either way, but I want you to know both ways so that you can give it your best shot and cook with confidence.

How to make a hard-boiled egg

To hard-boil an egg, set it in a small pot and add water to one inch above the egg.

Turn the burner to high heat and let the water come to a boil.

Once the water is boiling, remove the pot from heat and cover.

When the time is up, quickly remove the egg and run it under cold water, or place it in an ice bath.

How to make a soft-boiled egg

Making a soft-boiled egg is exactly the same as a hard-boiled egg, except you let it sit for less time in the hot water.

About 4 minutes will give you a cooked egg white and a nice runny yolk.

If you like your yolk only slightly runny, let the egg cook a little bit longer.

In either case, don't let the eggs boil in the water for too long, or sit in the hot water longer than directed. Doing so results in a chemical reaction that turns the outside of the yolk green. You have probably seen this before in improperly boiled eggs.

This ramen chicken noodle soup recipe may have an exotic Asian chicken soup flair, but it's incredibly easy to make. Although there are several ingredients in this tasty fusion of Asian and American cuisine, it only takes about 10 minutes of prep and 30 minutes to cook.

I'd say that's easy, wouldn't you? 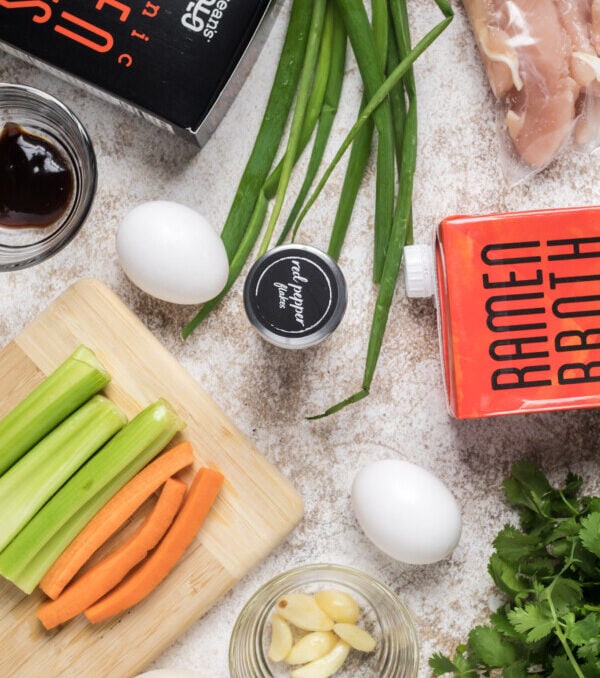 While there are several ingredients in this soup, they're all quite simple, and most require only minimal prep like dicing the vegetables. The real magic is putting all of these ingredients together in a pot and letting them simmer into a delicious Asian chicken soup fusion flavor explosion.

Again, although there are several ingredients, this entire recipe revolves mostly around simmering them all in a pot and letting them come together. You'll only need to use a knife for a few minutes, and after that, you simply let it cook away.

To begin, cut chicken into ½ inch pieces and season.

Mince the garlic and cook it for about half a minute with 2 tablespoons of olive oil in a pot.

After that, add the chicken and saute for 5 minutes.

Dice the vegetables and cut the lime into wedges, setting aside half the lime to be juiced, and add all to the stock pan.

Pour the ramen broth, juice from the half lime, sea salt, black pepper, hoisin sauce and red pepper flakes into the stock pan and stir.

Bring it all to a boil, then reduce and simmer for 15 minutes.

Add ramen noodles and cook for 10 more minutes. Garnish with fresh chopped cilantro and hard-boiled eggs, and you're done.

This ramen chicken noodle soup will keep in the refrigerator in an air-tight container for up to 4 days.

For longer storage, you can freeze this soup in a freezer-safe, air-tight container or heavy-duty freezer bag for about 4 to 6 months.

This makes it a great dish to make up ahead of time for future use.

This super-easy Asian chicken soup fusion recipe that came out of the fever dreams of my brain is a breeze to make, so there's really not much to say in this section.

However, you know me. I like to take out all the guesswork for you so you can create a dish that's as good as the original. So let's go over a few points before we part ways.

Can I use any kind of ramen broth?

You absolutely can. Each type of ramen broth has a different flavor, but it's all ramen, and it's all delicious in this recipe.

Can I use other meats in this soup?

While this is an Asian chicken soup recipe, you could also use pork, which is another traditional ramen protein source.

How long will this soup last?

You can store this soup in the fridge in an air-tight container for up to 4 days. You can freeze it for between 4 and 6 months.

I'm not a fan of heat. Do I have to use the red pepper flakes?

Absolutely not! This recipe—and any recipe, for that matter—comes down to personal preference. If you leave out the red pepper, you'll still enjoy a delicious ramen chicken noodle soup.

Trust me, you WILL enjoy it! This ramen chicken noodle soup recipe takes the classic flavor of chicken noodle and turns it into a delicious Asian chicken soup that everyone in your family will love.

It's such an easy recipe, you owe it to yourself to try it. Make this soup once and it will become a key part of your recipe rotation. 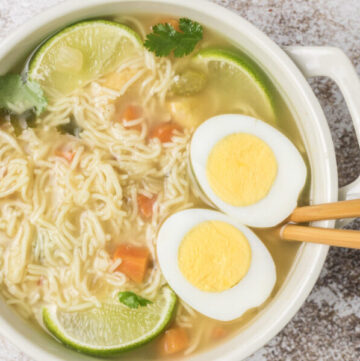 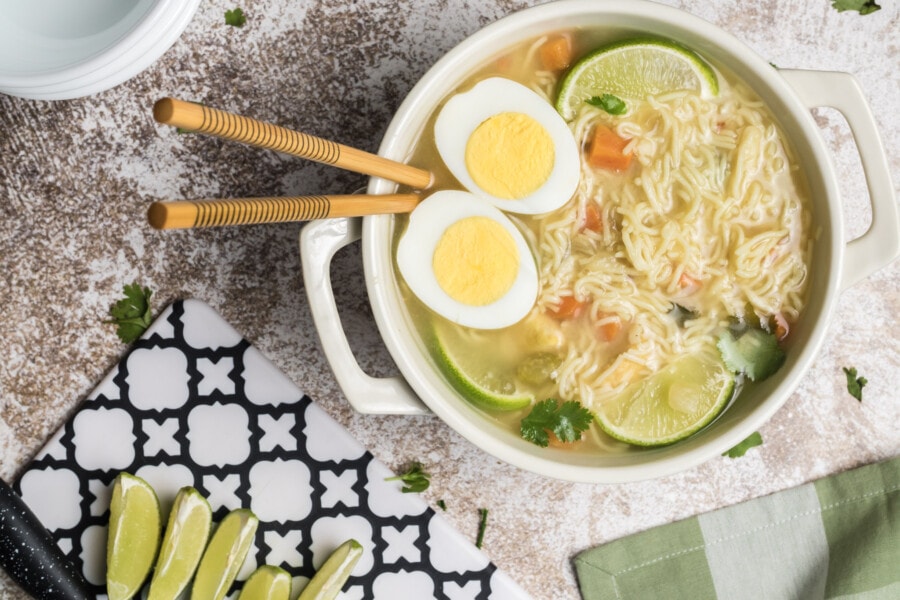 Other great recipes to try