You’re going to love this eggnog cheesecake recipe. And the best part? No baking! Follow this foolproof eggnog no bake cheesecake recipe and enjoy the delicious, smooth and creamy dessert. It’s light, fluffy and a perfect holiday treat! 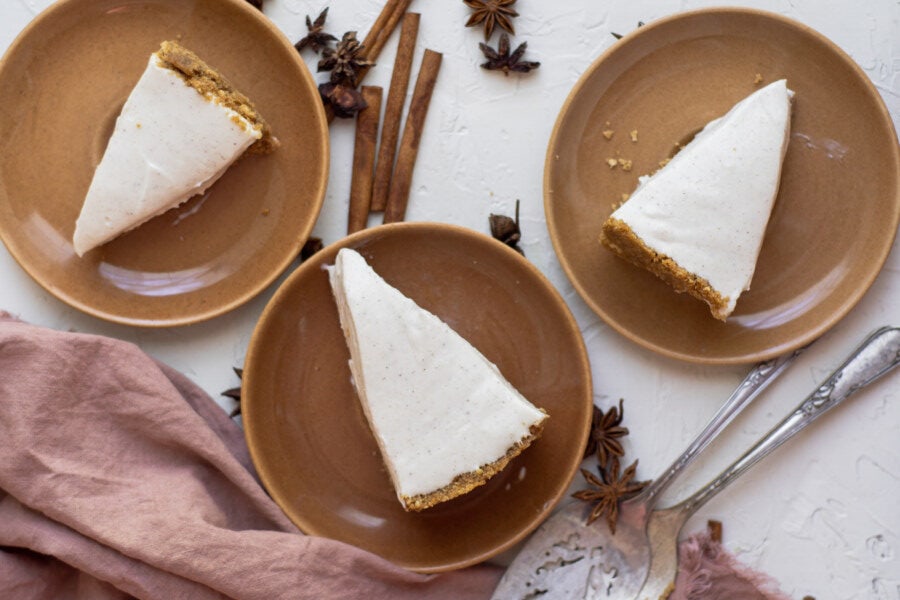 ‘Tis the season for surprises, but one of the things about the holidays that most surprises me is that eggnog isn’t as pervasive as it should be. As soon as August hits, pumpkin spice is everywhere. It’s not just on menus. people rave about it. They can’t get enough of it from August to November.

Meanwhile, eggnog, which is symbolically the same thing for winter, isn’t nearly as beloved, which is a shame, because it’s so traditional and with good reason.

For some of us, Christmas just doesn’t feel the same without eggnog. I think it deserves pumpkin spice status and is long overdue for some internet support.

One of the ways I’m doing my part is by sharing this no-bake eggnog cheesecake recipe.

Yes. That’s no-bake. Find out more about how to easily make this essential holiday treat. 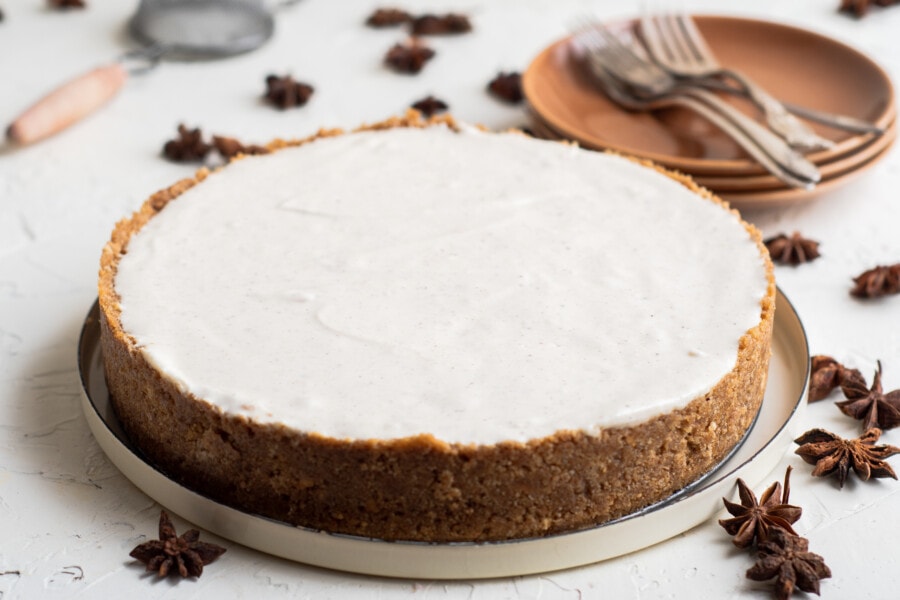 What is Eggnog No Bake Cheesecake?

As difficult as this is to believe, this recipe is exactly as the name suggests. It’s an eggnog cheesecake you don’t bake in the oven. Shocking, right?

This is a great dessert you can whip up when you don’t feel like turning on the oven or baking. Because you’re not using eggs, there’s very little room for error.

Cheesecake is perfect on its own. Whether you toil and mix and bake, or make an easy no-bake version it tastes incredible. However, cheesecake in its perfect simplicity lends itself to the most outrageous and over-the-top spin-off varieties you can think of. There is a cheesecake recipe for anything sweet and they cover the entire spectrum of possibilities.

One of those possibilities is the holiday approach which we’ll be exploring through no-bake eggnog cheesecake. Eggnog cheesecake is eggnog forward with nuanced cream cheese flavor and the airy consistency of a delicious no-bake cheesecake. 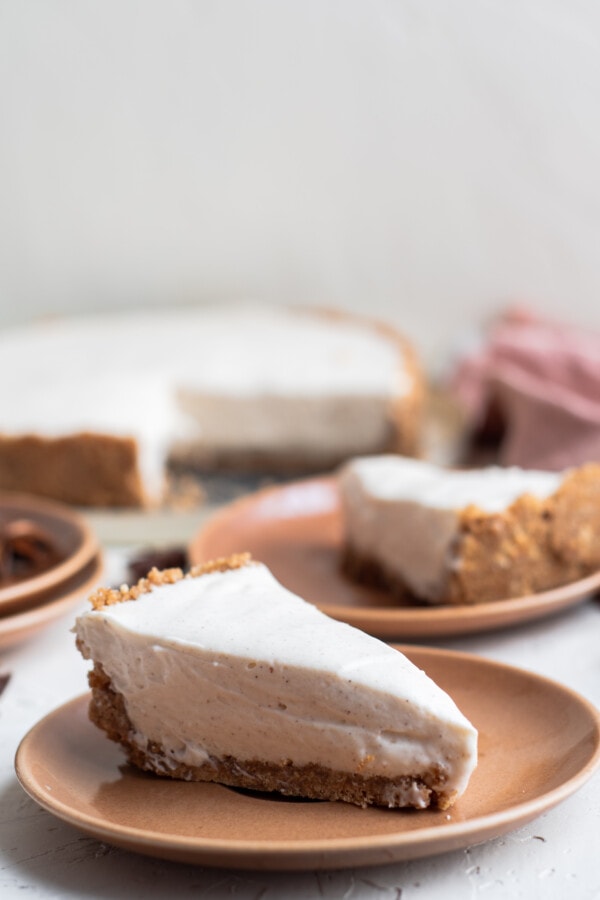 Is Eggnog No Bake Cheesecake the Same as Baked Eggnog Cheesecake?

With the texture, you’ll notice the main difference is inconsistency. Baked cheesecake is dense and silky smooth. Whereas it’s no-bake counterpart is airier and more falls somewhere between a cheesecake and a mousse.

While there are some differences, none of them take away from this incredible dessert. And you will love the no bake aspect of this recipe.

If you’re baking a traditional cheesecake, you know how easy it is to overbake or underbake. Or overbeat the eggs. There’s a lot of over/under pressure.

With no bake eggnog cheesecake, we are cutting out the complicated bits and doubling down on the delicious results! 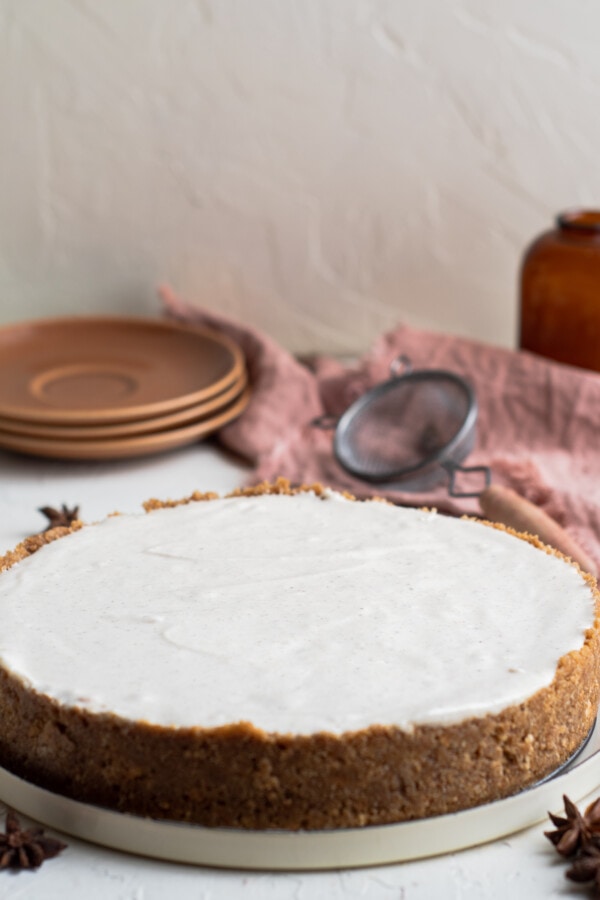 What You Should Know About No-Bake Eggnog Cheesecake

Ironically this eggnog cheesecake recipe uses one key ingredient that includes raw eggs. However, you shouldn’t worry about the health risks associated with raw eggs when drinking eggnog or using it as an ingredient.

Eggnog uses raw eggs traditionally, but this recipe for no-bake eggnog cheesecake doesn’t require you to make your own eggnog. Instead, it calls for premade eggnog, which is usually pasteurized. The pasteurization process kills potentially harmful bacteria in raw eggs.

So, using eggnog in your egg-free no-bake recipe won’t defeat the purpose of scrapping the raw eggs. It will only add some delightfully festive flavor to your favorite dessert. 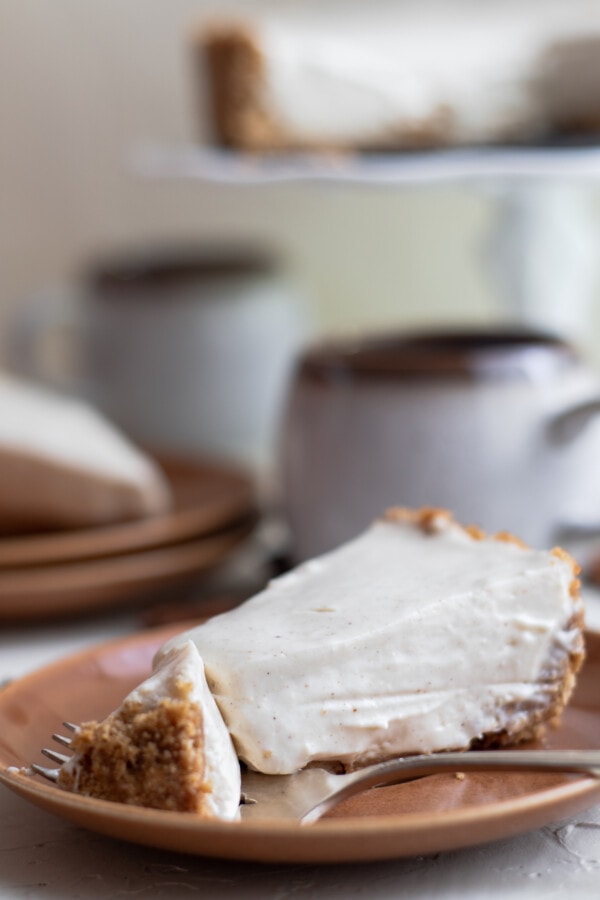 Other Amazing Eggnog Recipes to Try

If you’re curious about eggnog, read about the history of eggnog here. 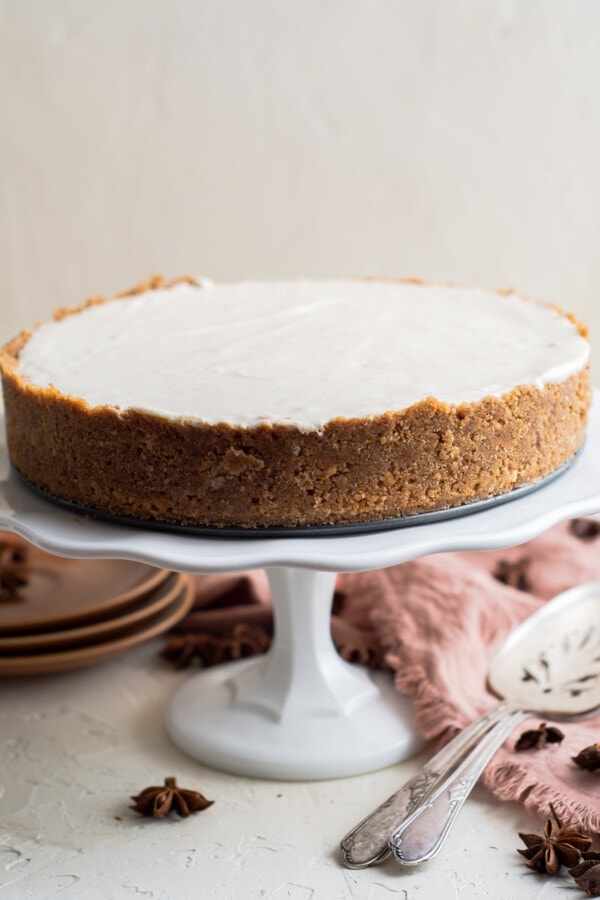 While no-bake recipes are not a direct replacement for a baked cheesecake recipe, they are a good alternative. Both versions of cheesecake are flat out delicious and each has its attributes.

One of the things I prefer about no-bake recipes, especially for cheesecake is that it takes the guesswork out of the equation. If you don’t make a lot of cheesecakes, there are several hurdles you have to overcome to do it just right.

For all the information available on how to cook a proper cheesecake a lot of things you just have to learn from practice. It takes familiarity to know what the surface of the cake should look like when it’s done baking. You need the experience to know how much the cake should jiggle in the center when it’s ready to take out. The biggest trouble most people face when baking a cheesecake is trying not to let it crack. That comes from mixing in eggs and other ingredients when they are still too cold.

Unfortunately, most people can’t afford to devote so much time to get it right, so if you struggle with baking cheesecakes, no-bake cheesecakes make a nice alternative.

They are also distinct in their consistencies, so in many cases, a no-bake cheesecake might just be specifically the type of dessert you want to make as opposed to the baked version.

Some people regardless of experience level, just like the fact that they can simply mix the ingredients and chill. However, no-bake cheesecake is not without its challenges. 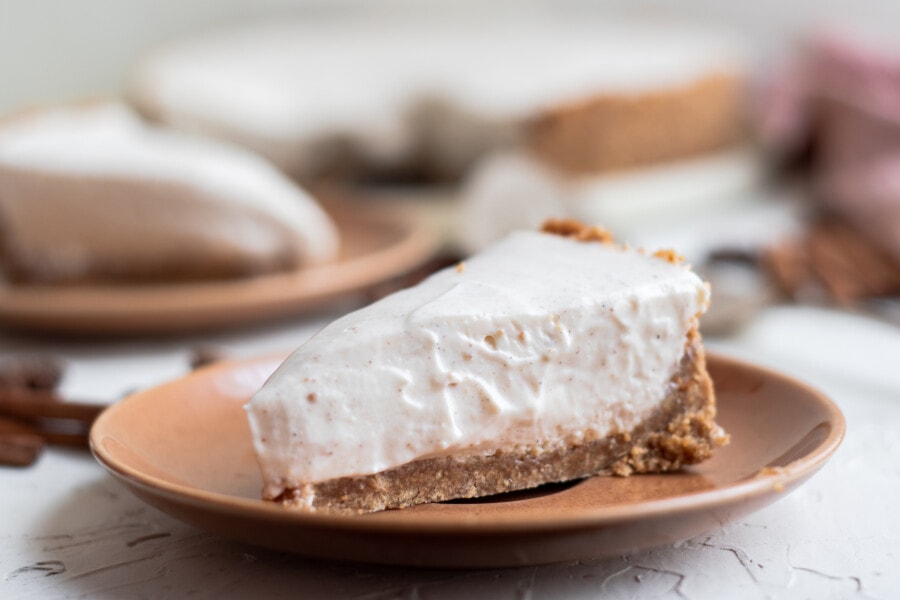 The Challenge of No Bake Cheesecake

There are a couple of challenges with making a no-bake cheesecake. Like regular cheesecake, you use a graham cracker crust, which requires some finesse when pressing it into the pan and getting it to adhere to the sides.

Thankfully, this is not a timed event, so you should be able to get it right with a little bit of patients even if this is something you have never done before.

Another challenge is a little bit tougher to master because it requires patients and stamina. I recommend using a stand mixer if possible when making this recipe because it will make everything go so much smoother, not just in the consistency of the cake, but in the impact on your arms and sides.

If you do hand mix, it’s a rigorous and lengthy process to get your heavy cream to peak.

The eggnog goes into the whipped cream gradually after you get the heavy cream to peak. You need to continue whipping it until you again have stiff peaks of eggnog infused whipped cream.

The following step requires you to fold the whipped cream into the rest of the cream cheese mixture. Folding is a gentle process and it’s important in achieving the right texture in the batter.

Although critical, these steps are not complicated and fairly easy to carry out, so even if you do have to make it by hand, don’t worry that it won’t come out right. Unlike watching a cake bake in the oven, you have complete control over the outcome.

Once it’s mixed, pour it onto your crust, cover, and let your refrigerator do the rest of the work. The best part is, you can’t overchill it or leave it in for too long. Just remember to either eat it or put it in the freezer within five days of making it.

That won’t be a problem, though. This recipe is so good it will be gone before you know it.

What You’ll Love About Eggnog Cheesecake

Eggnog cheesecake is thick, creamy and full of delicious eggnog! This easy cheesecake recipe is perfect for the holidays and a great way to enjoy one of my favorite drinks of the season.

Here’s what I love about eggnog cheesecake:

Even if you are not a fan of eggnog, I highly suggest you give this eggnog dessert a chance. You will be surprised at how tasty it is. 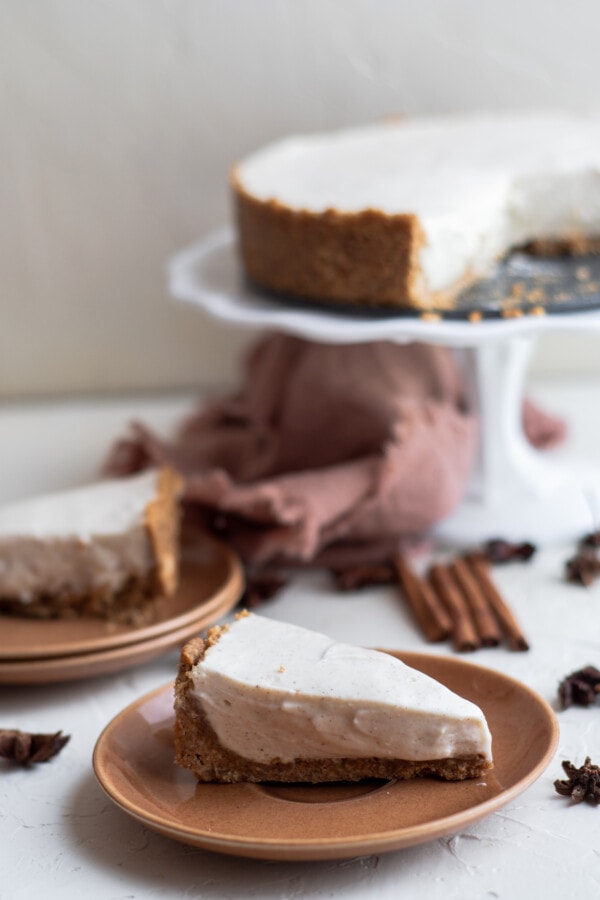 Ingredients in No Bake Eggnog Cheesecake:

This eggnog no bake cheesecake can be stored in an airtight container for up to one week in the fridge. 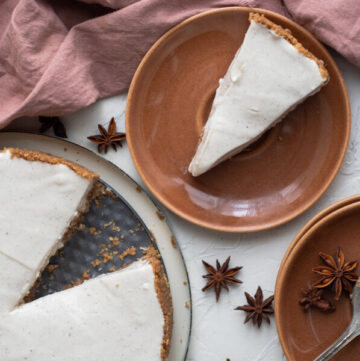 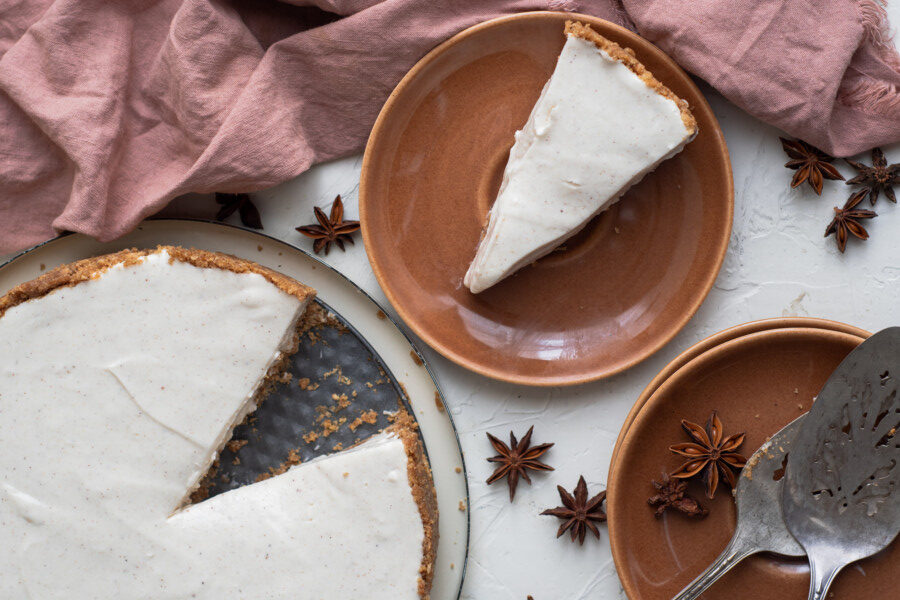