Since I love making popsicles, I thought the Dole Whip would lend itself nicely to a delicious tropical treat frozen pop. I was so right! 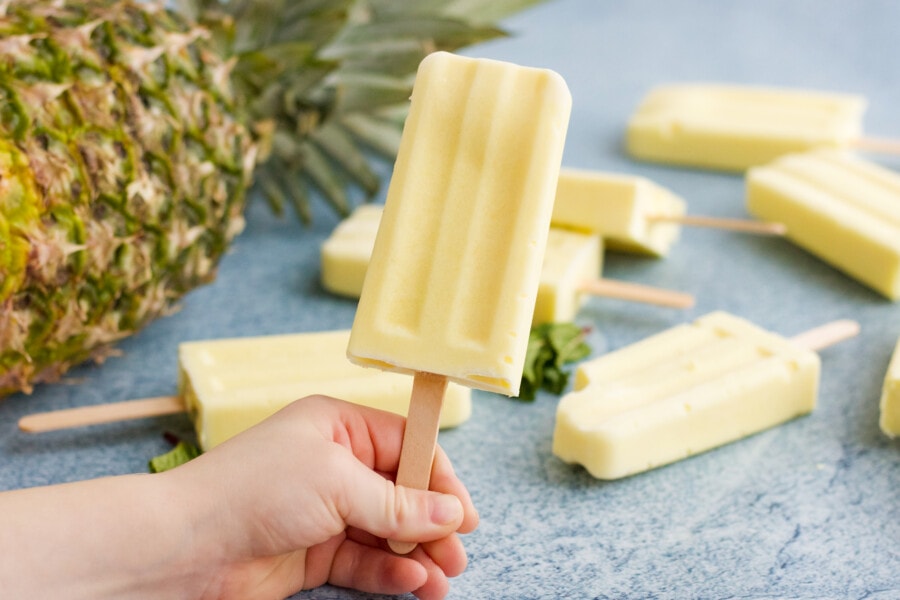 When I think of my favorite summer flavors, I can’t help but think of one of the best summer vacations ever. That’s a trip to Walt Disney World.

There’s nothing as inspiring as Disney’s iconic Dole Whip.

It’s so popular it’s got its own merchandise. Since I love making popsicles, I thought the Dole Whip would lend itself nicely to a delicious tropical treat frozen pop. It’s a great way to enjoy a small piece of the Magic Kingdom at home.

Since not everybody is able to travel just yet and a lot of us are anxiously awaiting our next chance, this recipe for a Dole Whip inspired popsicle should help.

Read on to find out more about Dole Whip and how you can bring the unique flavor home in popsicle form. 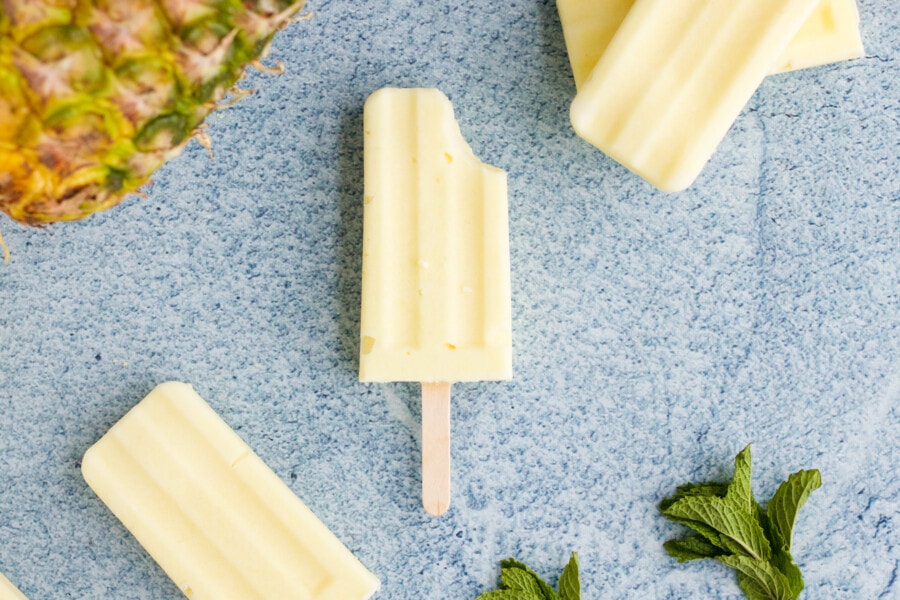 What is Dole Whip?

The original Dole Whip is a pineapple soft-serve treat that originated at Disneyland in 1984. The frozen snack became a cult favorite among Disneyland visitors after it appeared on the scene more than ten tears behind Dole’s sponsorship of Walt Disney’s Enchanted Tiki Room.

Although the snack made a late appearance, it is now a staple at the park. It was once thought that Dole Whip was only available in two places, Disneyland and Hawaii.

Of course, The Dole whip made it over to Walt Disney World as well. Although it is a relatively new offering given nearly 70 years of Disney parks history, the instant classic is now a worldwide sensation.

The remarkable characteristic of Dole Whip pineapple soft serve is that it is so creamy and balanced. It does not taste like a sorbet but has a rich and velvety smooth texture that is dense and also light.

The bright pineapple flavor mellowed sweetness. There is no harsh tartness that you might expect from the acidic fruit and there is no icy crunch as you so often find with attempted duplicates. 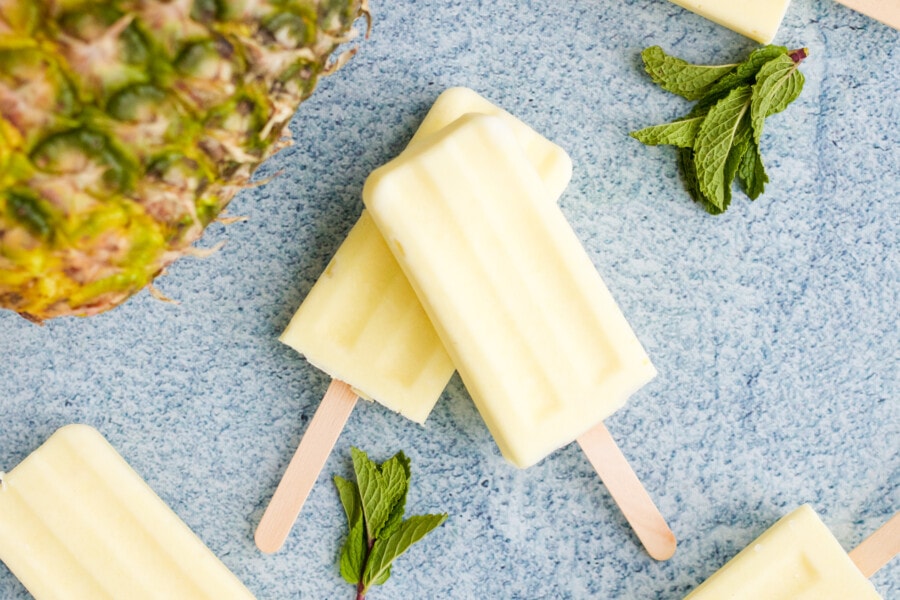 Does Dole Whip Have Dairy?

No. It actually doesn’t. The recipe is vegan and has been since at least 2013. However, there is a creamy texture to Dole Whips that would make you think otherwise. Interestingly it isn’t dairy that made the original nonvegan.

It was a byproduct called sodium caseinate according to isitvegam.com. While chocolate and vanilla soft serve still include the nonvegan ingredient, pineapple, and several other Dole Whip flavors are safe for vegans to consume and therefore also lactose intolerant.

The only milk used in the official Dole recipe is coconut milk, which is a creamy substitute indeed.

However, there is another way to make this frozen treat with Dairy. Disney released an alternate recipe on their Disneyland app according to Glamour.com, which listed three ingredients for the recipe including frozen pineapple, pineapple juice, and vanilla ice cream.

This may not be the official recipe, but it is a good shortcut. If you wanted to make it a little closer to the real thing, you could make it with coconut ice cream instead. 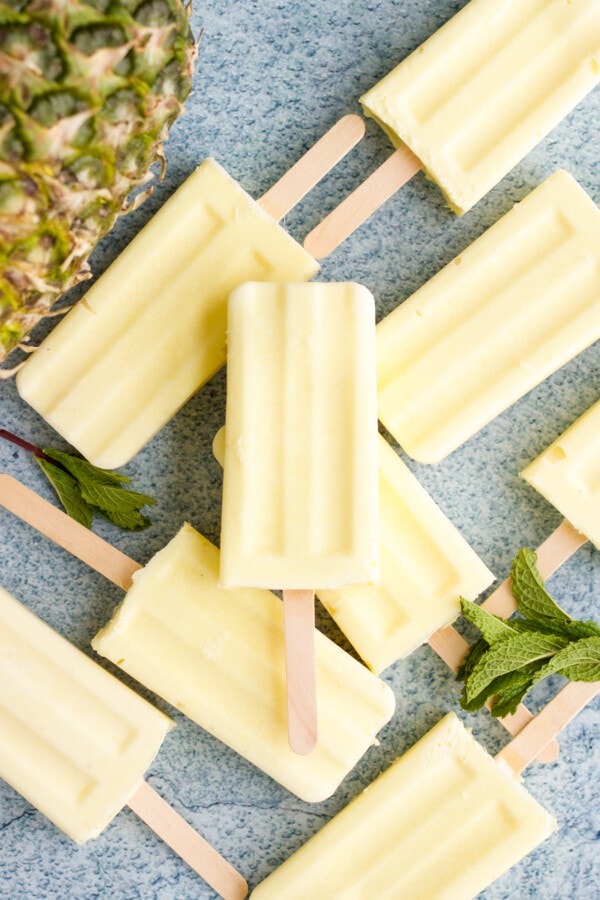 Where to Get Dole Whip

In recent years, Walt Disney World has expanded the number of locations where you can get a pineapple Dole Whip. You can also get the Dole Whip in other flavors at other locations. Here is a brief list of places that serve Pineapple Dole Whip and other Dole Whip Flavors:

These flavors served in various combinations make up specialty Dole Whips for seasonal special events and are often inspired by Disney characters.

At Disneyland, the original Dole Whip is largely unchanged although new offerings at the Tropical Hideaway between the Enchanted Tiki Room and the Jungle Cruise include a few additional flavors and embellishments. 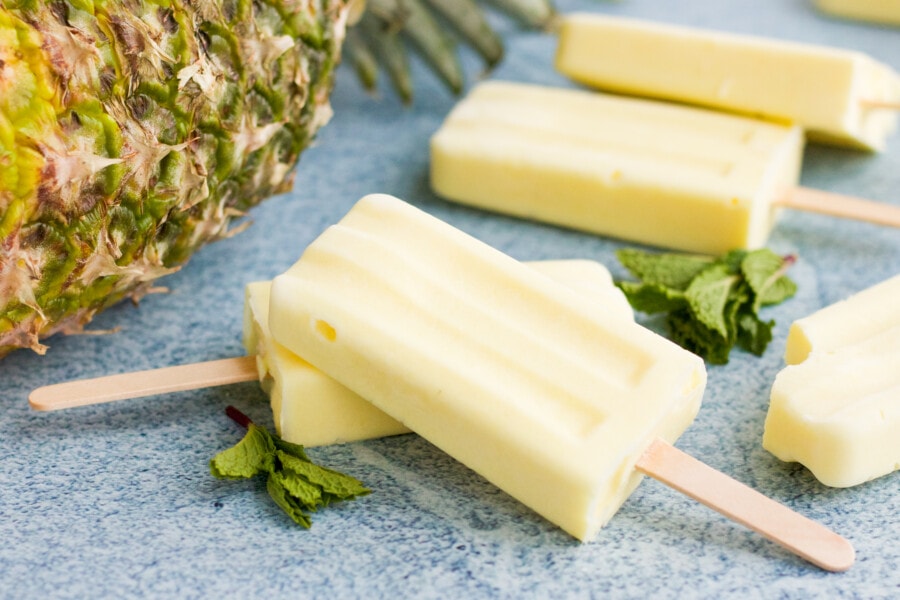 Other ways to get Pineapple Soft Serve

It’s a bit controversial. Some people say it’s the same thing with a different name. Others say it’s decidedly different. You can buy Dole mixes for soft serve on Amazon, but they are powder so they are not the real thing.

Frozen yogurt chains often offer a version of Dole soft serve. They don’t call it Dole whip, but there are some convincing versions out there. Others are not convincing at all and you can tell it’s not the same thing.

This could be the ingredients, or how they are mixed. I’m leaning toward the latter. At any rate, it’s not the official Dole Whip. If you are a Disney fan, you are likely to be somewhat disappointed, but still happy to get your fix.

There is a better way to get Dole Whip outside of Disney parks. That is to make it yourself at home. 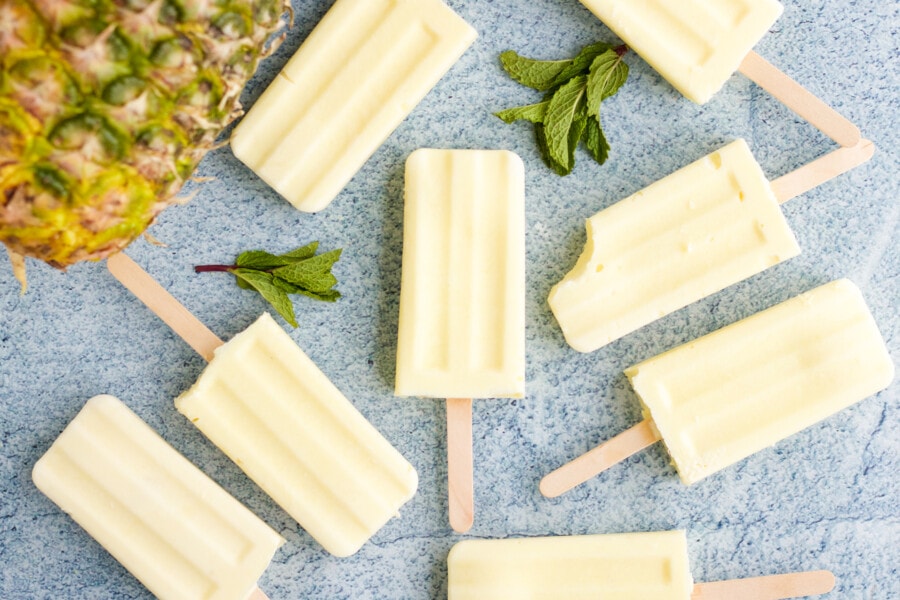 How to Make Dole Whip

As we’ve seen with the recipes above, it will be difficult to get a straight answer about what is truly the official recipe. Disney seems to enjoy its status as the only place to serve Dole Whips barring the Dole pineapple plant in Hawaii.

You can take the advice of the Disneyland app, coconut or not, and blend up the three ingredients listed. It’s closer to the real thing than anything outside of Disney you are likely to have tasted.

My recipe is very similar, with one major exception.

Since this recipe is meant to be dole whip flavored and not an actual soft-serve treat it is made a little differently. Instead of lending the pineapple ingredients with ice cream, I use heavy cream.

The mixture is going to be frozen in a mold, so you need it to be liquidy. I found that heavy cream does the best job of creating the desired texture.

Follow my recipe below to get the exact Pineapple Dole Whip popsicle I created, but you can also make it frothier by increasing the speed of your mixer. The froth will make the mixture go in lighter, but be aware that the frozen effect will not be as smooth on a frothy popsicle mix. 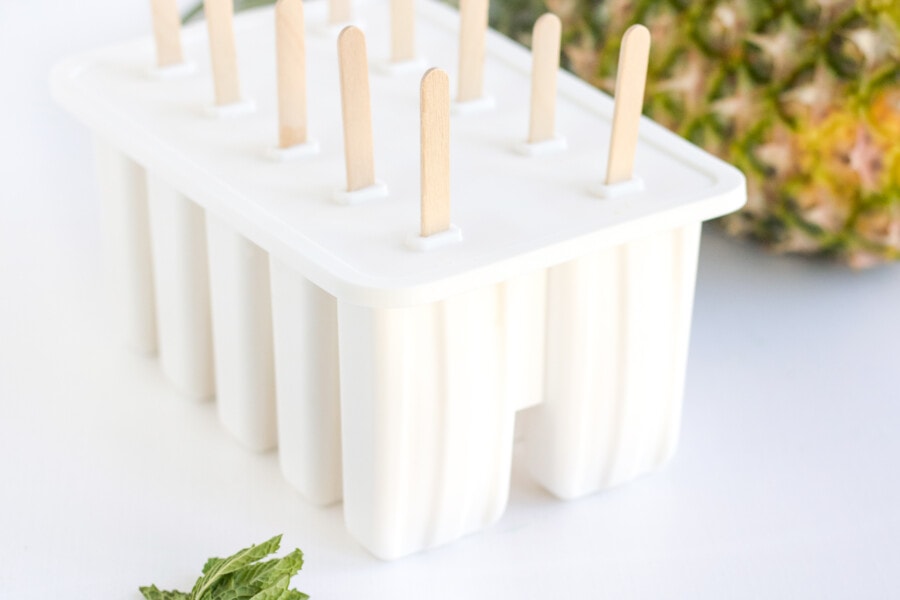 How to Make Dole Whip Popsicles

1. Combine crushed pineapple (with juice) and additional pineapple juice in a blender.
2. Blend on low until fully incorporated.
3. Add the whipping cream and pulse until well mixed. For a frothier popsicle, you can increase to a full blend to give it a light whipped texture.
4. Taste and add additional whipping cream if desired.
5. Pour into molds and allow to freeze at least five hours or overnight before serving 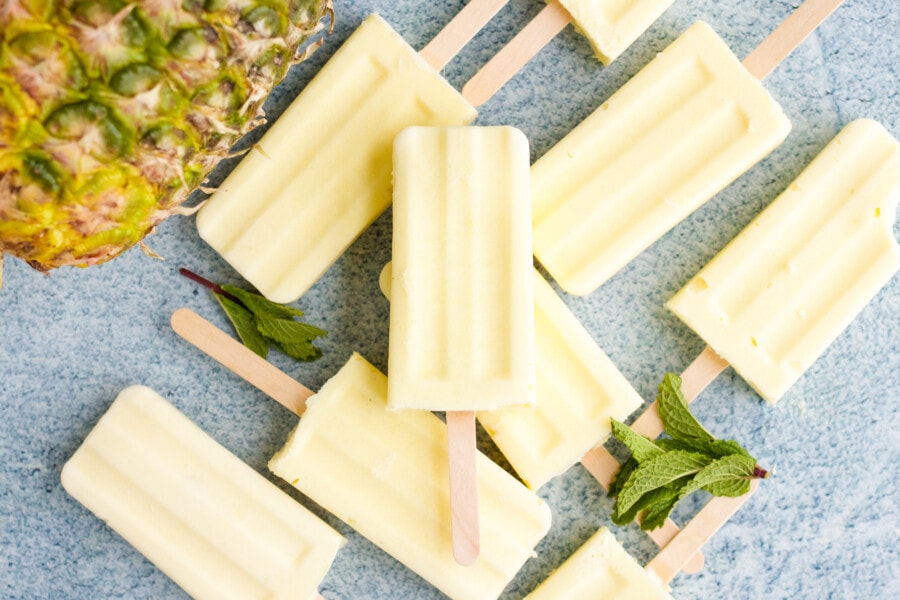 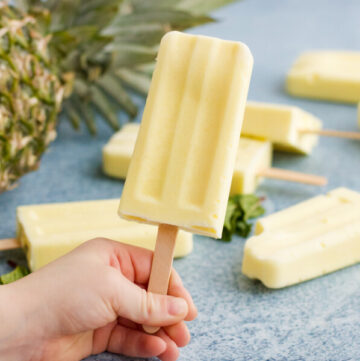 Keyword dole whip, homemade popsicles
Tried this recipe?Let us know how it was! 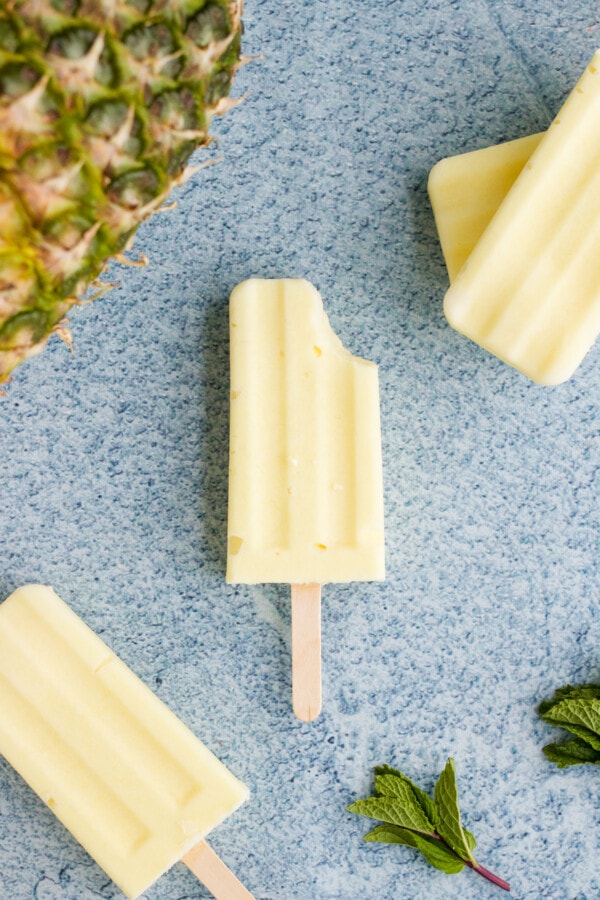