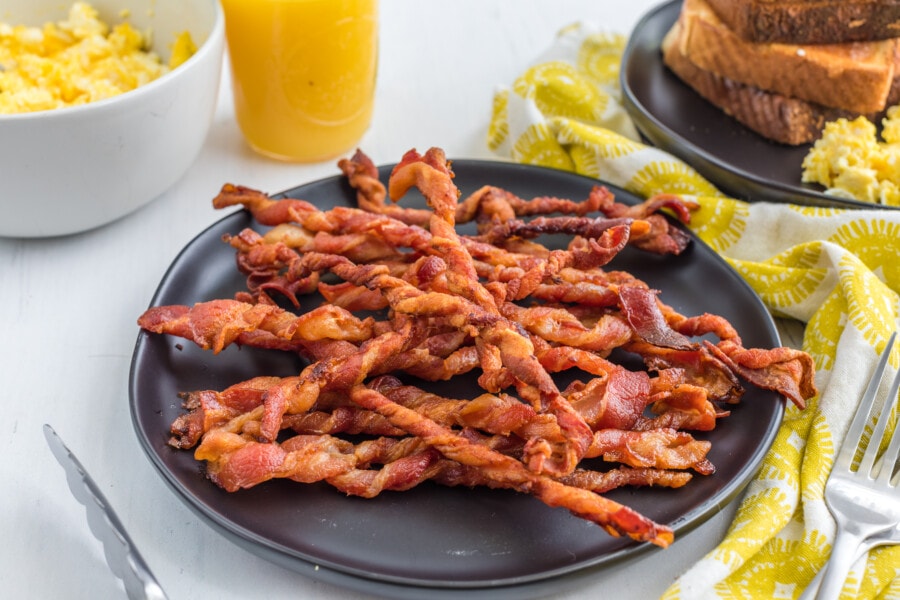 Is there anything better than bacon? I’m not sure I can think of anything. Bacon has been on my breakfast menu for as long as I can remember. My grandmother made bacon almost every morning for breakfast, and so did my mom.

When I moved out and started my adult life – and later, started a family – I put bacon on the plate at breakfast at least three or four times a week. Whenever I made eggs for breakfast, bacon was always there to accompany it.

I just LOVE bacon. Luckily, lots of us do!

Over the years, I’ve made bacon in all kinds of ways. I’ve candied it. I’ve even made my own bacon from pork belly. Now that I have an air fryer, I’ve been making bacon a bit differently over the past few months. I’ve been twisting it!

Thanks to the air fryer and TikTok, I’ve been making delicious bacon in this unique way for a bit, and I have to say, it might be my new favorite way to make it.

Before we go any further, I want to stop for a minute and talk about where bacon came from. It’s actually quite interesting.

After all, if it weren’t for this glorious cut of meat, our breakfasts would never have been as delicious as they are. Let’s take a look at where this much-beloved but often taken for granted cut of pork comes from. 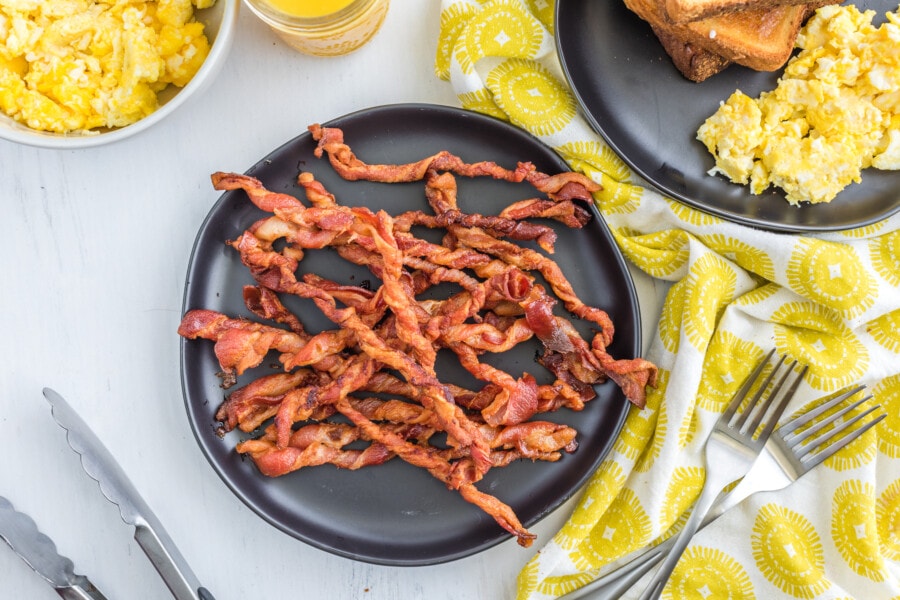 Food historians cite China as the birthplace of bacon. Salted pork belly, the cut of meat from which we get those delicious pork strips of heaven, first appeared thousands of years ago in ancient China.

From there, pork curing methods spread all across the Roman Empire. Anglo-Saxon peasants cooked with bacon fat.

Until sometime in the mid-16th century, the Middle English term bacon referred to all pork in general. At that point, people began referring to sliced pork belly as bacon, but no one knows why exactly.

An interesting little fact is that in the 12th century, a church in Great Dunmow, an English town, promised a side of bacon to any married man who could swear before the church and God that he hadn’t argued with his wife for a year and a day.

A husband who could do so was held in high esteem by the community. This is where we get the term “bringing home the bacon”.

Journey to the New World

Hernando de Soto is credited as being the “father of the American Pork Industry”. he brought 13 pigs with him to the New World in 1539, and after three years that number had exploded to 700.

It’s said that the indigenous people of the area fell in love with pork and were glad to accept pigs and pork as peace offerings and gifts.

Another interesting fact is that pigs are the reason that Wall Street has that name.

In 1653, a growing horde of pigs almost stopped the Dutch construction of a wall on Manhattan Island that was to be used to keep the British and indigenous population out of New Amsterdam. Later, the site was called Wall Street.

Today, bacon is a beloved product used in breakfast, lunch, and dinner, along with appetizers and even desserts!

You would think it would have fallen out of favor in today’s health-conscious society, but no matter how healthy a person is trying to be, they just can’t seem to say no to bacon! 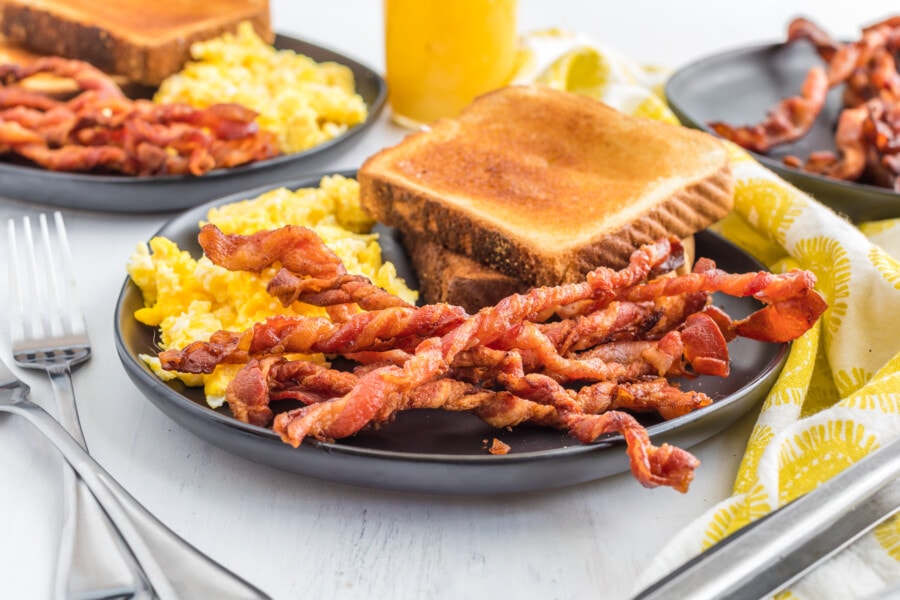 I must say, when I first saw these crispy air fryer bacon twists on TikTok, I was surprised. I’m by no means a social media novice. I’m a blogger, after all. That being said, my TikTok experience is… well, it’s limited.

I’m not exactly itching to get in front of the camera and make videos, and I must confess, I have long looked at TikTok as a place where kids do dances and the kinds of things that most of us older folks are happy we were never recorded doing in our younger years. LOL

But then I decided to give it a look. After all, part of staying young in your spirit is being open to new things. So I hopped on, and I couldn’t believe how much it had to offer. There’s SO MUCH FOOD on there, you guys!

I have found all sorts of great recipes, but the one that really caught my eye was twisted bacon. I decided to bust out my air fryer and try the recipe for myself. And that’s how I ended up making crispy air fryer bacon twists.

I know I’ve called many of my recipes easy in the past, but this one is by far the easiest. It takes one ingredient – bacon. That’s it. That’s all you need. Just bacon. If that isn’t the easiest ingredient list in the world, I don’t know what is! 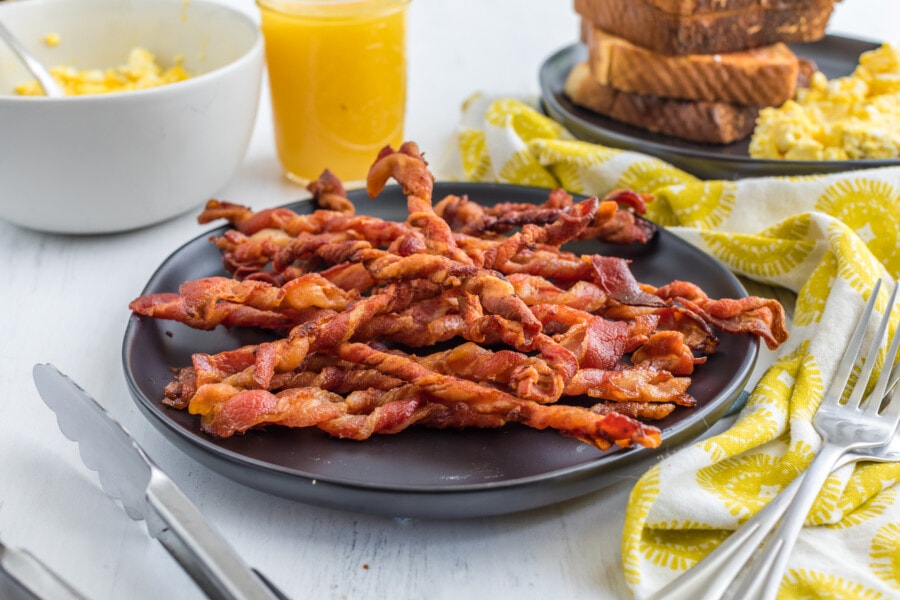 Cooking up these air fryer bacon twists is simply a matter of tweaking the basic recipe for regular bacon that everyone uses – 350 degrees for 10-12 minutes, still depending on how ultimately thick the bacon is.

I made these with both thick-cut bacon and regular bacon and using your air fryer makes the best bacon! It’s super easy to do.

Making Bacon Twists in the Oven

If you don’t have an air fryer, don’t worry! You can make this absolutely delicious TikTok sensation in the oven, as well. The process is just as simple as making this twisted pork treat in the air fryer, so it’s not any extra work.

It’s simply a matter of changing up what you use to make the twisted bacon in the oven. That’s it!

Here’s what you do to make twisted bacon inside your oven.

That’s all there is to making twisted bacon in oven! As you can see, the only real difference is simply using the oven instead of the air fryer to make the bacon.

Nothing to it! Let’s twist and bake some crispy bacon!

The only drawback to this easy oven method is that you have to clean a broiling pan, but even so, it’s a small price to pay for this absolutely delicious twisted bacon treat. 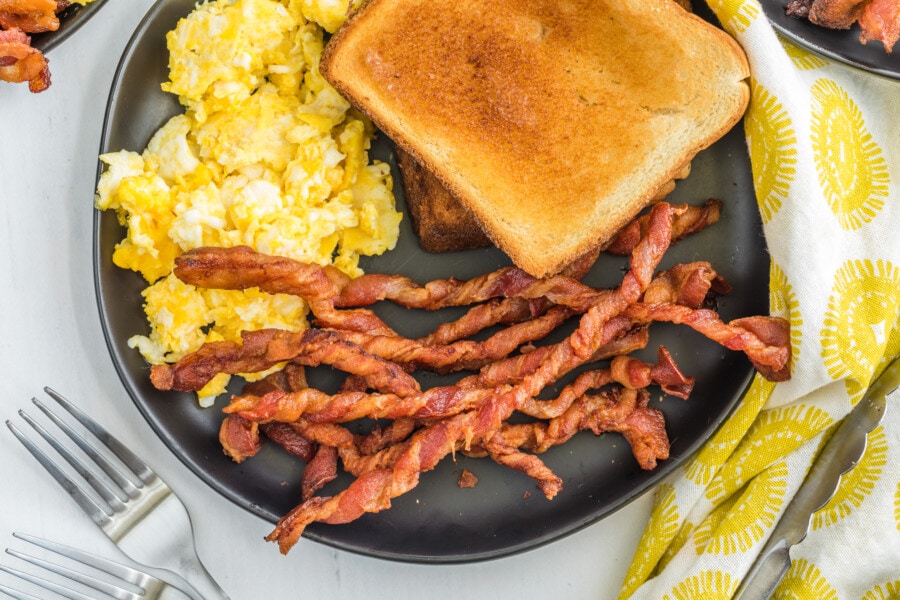 This is just about the most basic recipe you’ll ever make. I mean, it’s just twisted bacon cooked up in the air fryer. That being said, you can mix things up.

There are all sorts of bacon recipes out there that use various sauces or other ingredients to kick up their flavor. You can simply use those recipes, twist up the bacon, and then air fry it.

I recommend trying a twisted version of my Sweet Glazed Bacon. You can also try our Smoked Maple Bacon recipe and simply twist the bacon and air fry it after curing it rather than smoking it. Be sure to cut it a bit thinner than the recipe calls for so that it twists easily.

There aren’t a lot of tips for this recipe, as it’s simply twisting bacon and then air frying it. I only have two tips, in fact, but they’re very important.

Both of these tips are key to making sure you get the best texture possible with your crispy air fryer bacon twists, so be sure you read over them both. Here we go.

When you twist your bacon before cooking, do it as tightly as you can. The tighter the twist, the better it is. It will be crispier when twisted tightly, so really get in there and twist away.

You might be surprised to know that you need to spray your air fryer basket to make this crispy bacon. After all, bacon has a lot of fat in it, right?

Well, that’s true, however, until the bacon has cooked a bit, there’s still the potential for it to stick to the basket. So be sure you give your air fryer basket a nice, even coating of non-stick spray.

By the way, if you’re cooking this twisted bacon in the oven, the same holds true for spraying your broiling pan, too. 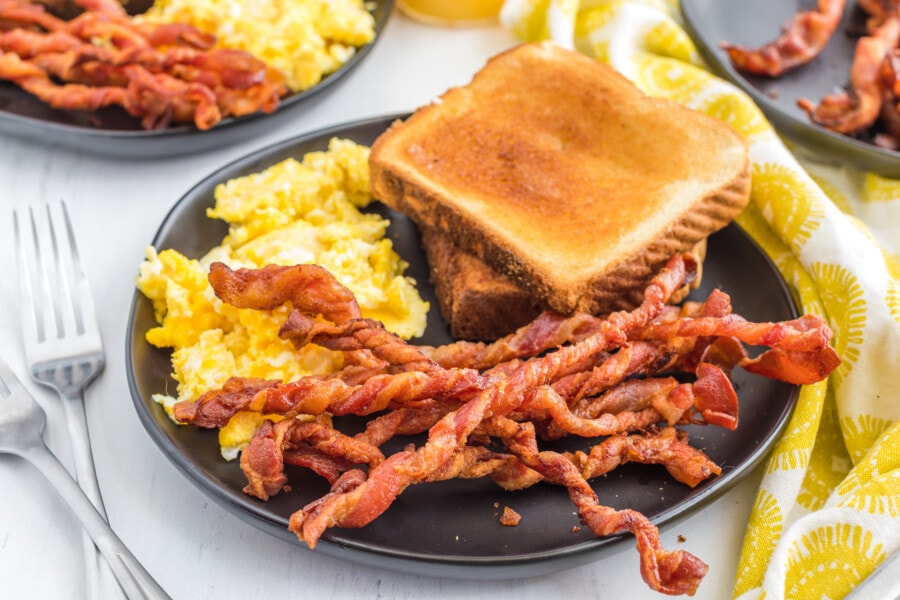 Of course, this recipe is the perfect addition to any breakfast table. It’s a fun twist on a classic breakfast treat that we all love, so adding it to the menu is a no-brainer. However, you can use it in other ways, too.

I like to serve up this twisted bacon on its own as an appetizer or snack with a side of maple syrup for dipping. It’s also great when cut into pieces and added to homemade (or even store bought) mac and cheese.

Basically, you can serve up these crispy air fryer bacon twists in the same way that you would regular bacon. They work well in any recipe that you’d add bacon to, as well. 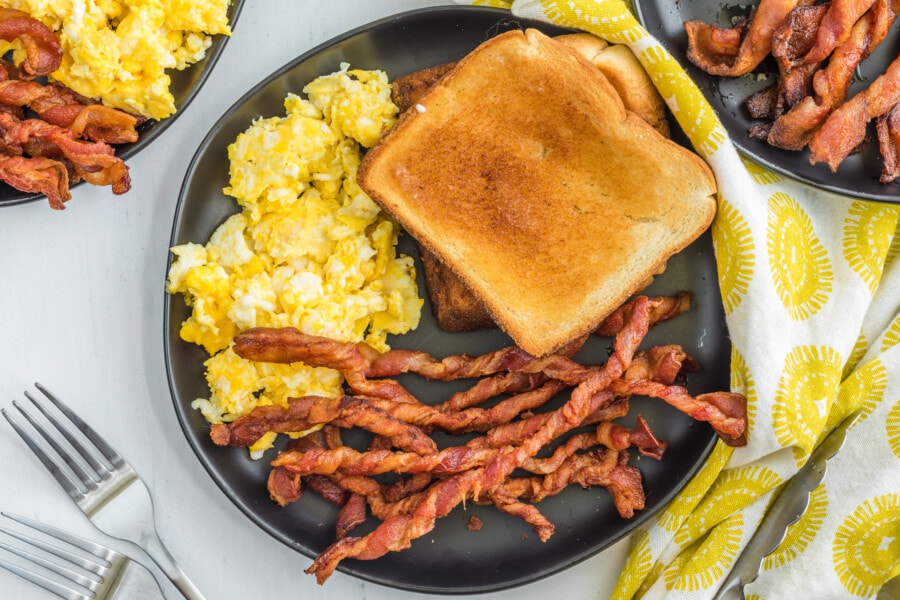 These bacon twists will keep well in the refrigerator in an air tight container for up to five days. You can also freeze these twists for up to a month. To reheat, simply microwave them or give them a quick pop in the air fryer.

Be aware that no matter how you reheat these crispy air fryer bacon twists, they will not be as crispy as they were when you first made them. That’s why I recommend only making as much bacon as you and your family will eat in one seating. 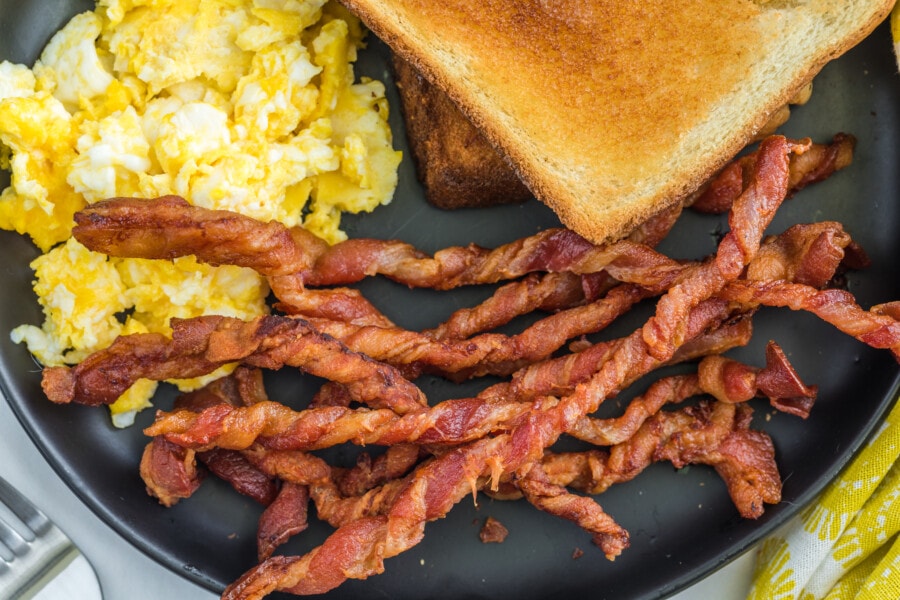 Before you go, let’s take a quick look at this brief FAQ. It only has a few entries, but they might just answer your questions if you happen to have any trouble with the recipe.

Why is my bacon soft?
You probably didn’t cook it long enough. This bacon cooks up crispy and delicious, but it takes a bit longer because the bacon is compacted together rather than laying in a flat piece.

Why is my bacon ripping when I take it out of the air fryer?
You probably didn’t spray your air fryer basket with non-stick spray. It won’t always happen, but if you don’t spray your basket, there’s a chance that your bacon will stick.

What can I do with this bacon?
Of course, you should put it on your breakfast plate. But you can also use it in any recipe that normally calls for bacon. You can also serve it as an appetizer or treat paired with maple syrup for dipping sauce.

These crispy air fryer bacon twists are absolutely delicious, and they’re a super fun twist on a classic breakfast dish. They’re incredibly easy to make, and everyone always loves them. These super crispy twists of bacony goodness are a fantastic addition to any breakfast table, and they’re so easy to make, you can hardly call it cooking. I like to say this recipe is cooking in name only. LOL

Give this recipe a try, and I’m sure you and yours will be super happy with the results. I mean, it’s bacon, after all. 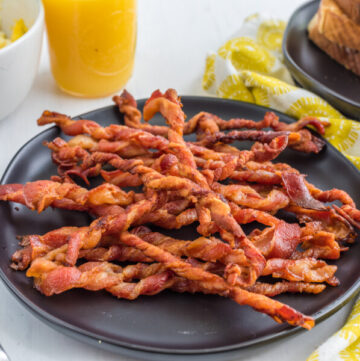 Crispy Air Fryer Bacon Twists - In the Oven, Too! 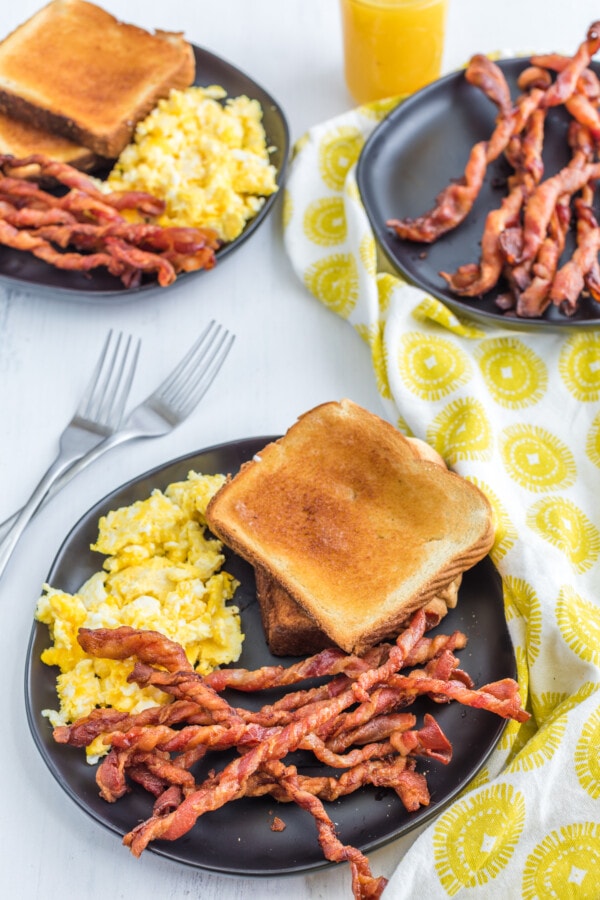 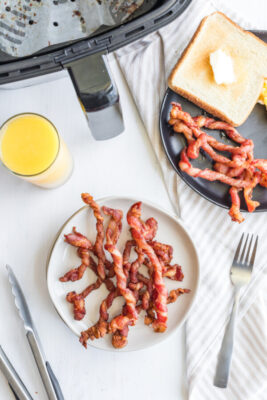 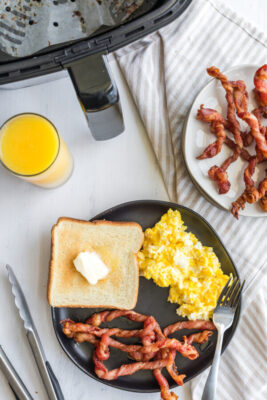 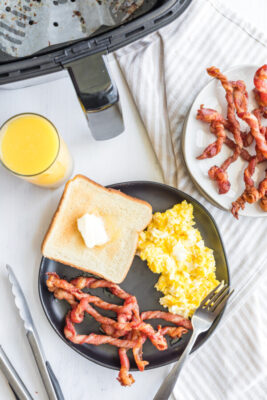 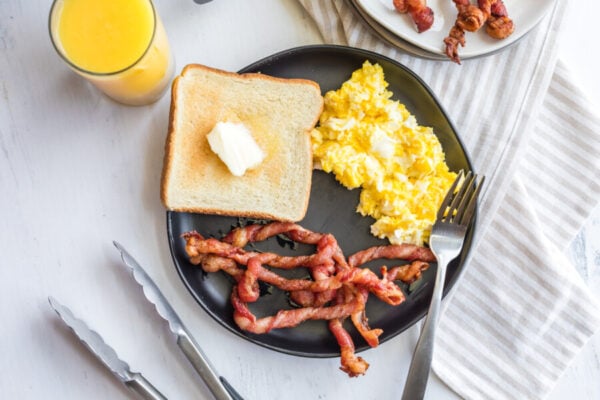 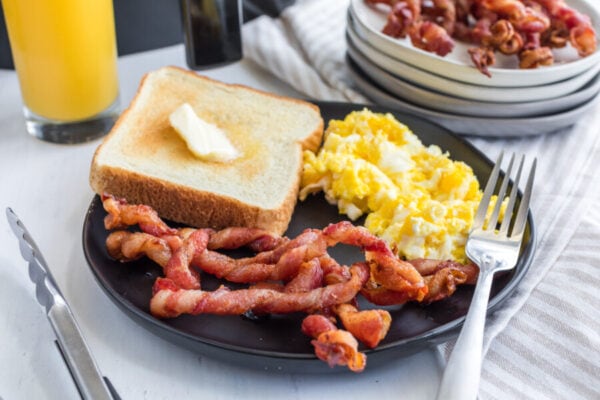 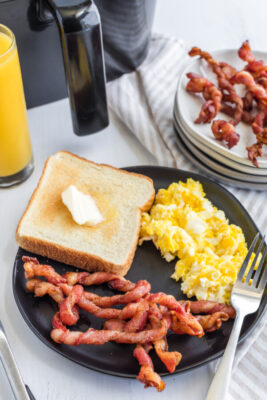 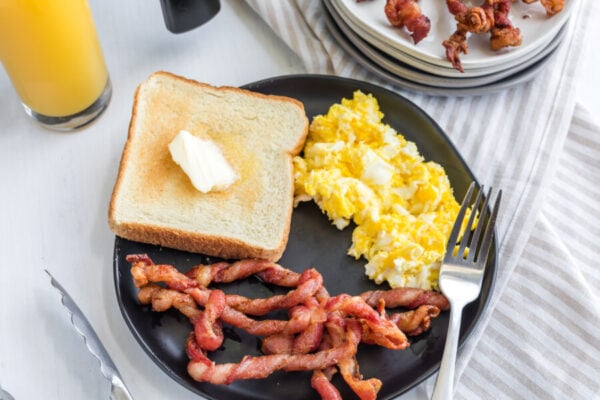 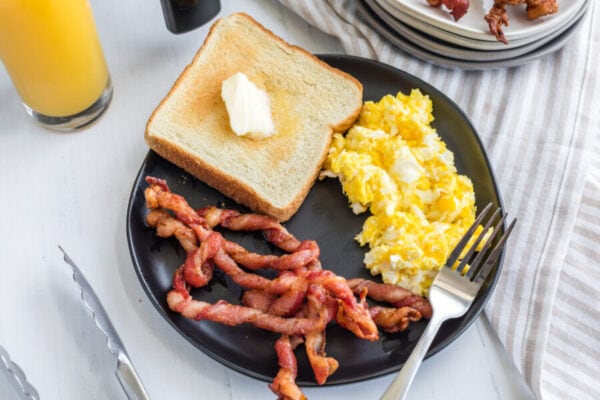 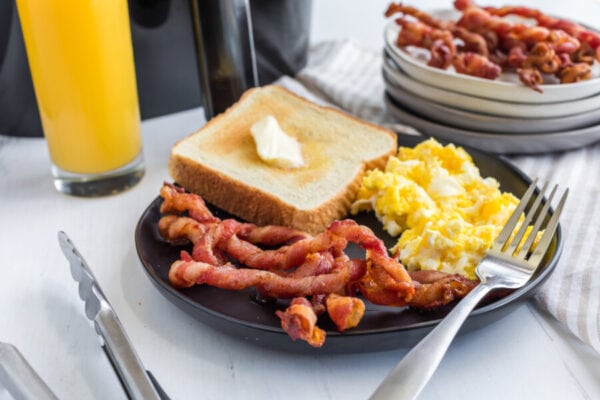 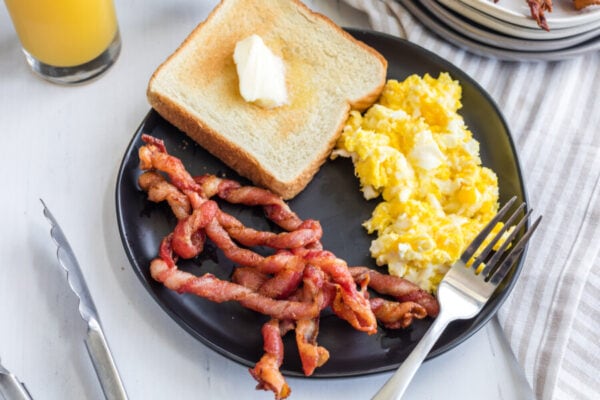