Blueberry baked French toast is one of the easiest and most delicious breakfast recipes you'll ever try. This Blueberry French toast bake has all the flavors we love about traditional French toast along with a delicious cream cheese filling with a hint of lemon and blueberries to finish it off!

You probably love French toast. You've probably made several French toast bakes before. You may have even tried a microwave-mug-French-toast because that's how much you have to have French toast. I get it. I'm right there with you.

But you don't have to stoop to microwave tactics to make this baked French toast which has everything a French toast lover such as yourself could ask for. It's brilliantly layered with cream cheese filling and bursting fresh blueberries and lightly seasoned with cinnamon.

This blueberry baked French toast with cream cheese filling has everything going for it. It's all baked into one gorgeous loaf of spongy custard-soaked brioche slices.

The best thing about it is the pep is easy and you can make it fast. Not microwave fast, but fast. And yes. This recipe does include ice cream and honey as a topping. Dessert for breakfast? Oh yeah, we're going there.

Traditional french toast is made in a pan. Oven-baked French toast is often a congealed mass of bread bits held together by an egg mixture. both taste similar and each marks the start to an amazing breakfast, but they are quite different.

The choice you make in which type of French toast dish to create may have to do with time. You can make a lot more servings at once when you make a French toast bake.

Also, pan-frying French toast individually requires more personal attention. For that reason alone, you may strongly prefer the bake, but if the end result is more important than the process, each style has its challenges and expected outcomes.

How it All Comes Together

French toast is best characterized as crispy on the outside and spongy on the inside, not accounting for the flavors. There are multiple reactions at work when you make French toast.

The bread absorbs the egg.

The egg sets, the surface of the bread begins to brown and caramelize. So many fantastic things are happening here, but each cooking method does it differently.

When you make a French Toast bake it doesn't brown as quickly and you lack some of the caramelization that pan-frying is so good at achieving.

However, in the pan, you have to be careful that the inside gets cooked through to balance with the outside. This can take practice, where leaving a bake in the oven while coming out slightly less caramelized on top is at least consistent.

On the other hand, if you get really good with the pan, you can end up with a perfect spongy center and two perfectly caramelized sides, improving the ratio if you prefer the crispy part of the toast.

My recipe perfects the baking method by fine-tuning the amount of baking time and where you place the baking dish on the rack. My richly flavored and textured baked French toast with cream cheese and fresh blueberries will come out exactly right every time.

And trust me, you will want to make this one a lot.

The Best Bread to Use For Baked French Toast

One of the tricks to making great baked French toast (or just French toast in general) is to use slightly stale bread.  I love this and it seems like almost every mind glowingly phenomenal recipe seems to somehow be about using up food before it goes completely bad.

Think banana bread or meatloaf. French Toast definitely tops the list, but I love that it's such a great way to handle bread that may have been sitting out too long. Or, you didn't get to make what you planned on making, and now you don't know what to do with it.

It's hard to go wrong with bread for french toast. I obviously haven't tried them all, but as long as they can absorb the egg mixture any slightly stale bread will do.

However, Brioche is among the most popular and best choices for getting that desirable french toast consistency inside and out. I also like the way you can layer this dish and overlap the brioche.

Structurally speaking as well as flavor-wise the brioche is the best candidate for this dish.

French toast can be enjoyed in a variety of ways, starting with maple syrup and real butter, maybe even a little bit of powdered sugar. But the accouterments only get better from there.

One of the best things you can do with French toast is to add fresh fruit. Although a fruit-based topping like strawberry glaze is good too, fresh fruit lends full flavor, texture and balance to make it a well rounded and complete dish.

The nutritional benefits can't be ignored either. It's a much better feeling to serve up a delicious dish when it also includes essential vitamins and antioxidants.

A Symphony of Flavor

You can completely change an entire French toast breakfast just by making fruit part of the recipe. My absolute favorite thing to add to French toast is blueberries.

They have a pleasant pop and a tartness that take this great baked French toast and make it exceptional. Once you start adding components like fresh fruit you can start to play with other things that build the richness and complexity of the dish.

I made a filling for this baked French toast out of cream cheese and lemons because all of these flavors bounce off of each other. It's like magic when you pull it out of the oven.

When the whole thing is done, your baked French toast will be sweet-savory, a little spicy, a little tart, a little crunchy and very creamy. It's the perfect dish for a weekend brunch.

This is something you put together for something really special, celebrating a promotion, a good report card, making the team, taking the trash out... Honestly, after trying this blueberry cream cheese baked French toast you'll be making excuses to celebrate.

This blueberry French toast bake is absolutely delicious and much easier to make than you'd think. It uses all the ingredients you'd normally find in a classic French toast recipe, but we cook it all up in a baking dish in the oven.

It cuts down on the muss, the fuss, and the mess. You'll end up with a delicious, decadent breakfast of French toast that takes much less work and makes much less mess. Score!

The French toast portion of this recipe is made up mostly of the standard ingredients that you'd expect to find in traditional French toast, and the cream cheese filling is made with what we usually use for a sweet cream cheese addition to recipes.

As such, most of these ingredients are already most likely in your kitchen, and any that aren't are easily gotten at your grocery store.

This blueberry French toast bake is a breeze to put together, and I do mean put together. The most actual cooking you'll do is mixing and coating. That's it. After that, all the work is done in your oven.

You'll find the complete recipe in the recipe card below, but here are the highlights so you get an idea of how easy it is to make this tasty breakfast treat.

That's all there is to it.

The complete outline of steps, including baking dish size, and other baking instructions are in the recipe card at the end of this post, but this gives you an idea of how easy it is to make this tasty blueberry baked French toast.

This is a hearty, delicious breakFEAST that is a complete meal all on its own. In fact, I don't serve this with any other dishes at all. This dish is more than enough to fill up even the biggest eaters for hours. With baked French toast, it's all about what you put on top of it.

I love topping this blueberry French toast bake with ice cream for a delicious dessert for breakfast meal that everyone loves. If you want to take the dessert out of it, though, feel free to top it with the old stand-by—syrup!

You could also go with whipped cream, as well. Heck, this is so good, you don't have to top it with anything at all if you'd rather not. There are no wrong answers here, people!

This delicious blueberry French toast bake will keep well in the refrigerator in an airtight container for about four days.

I suggest dividing french toast in different portions and storing it separately. It’s a perfect breakfast for meal prep. You just have to grab and have your breakfast at work on busy days.

You can't freeze this dish because it loses texture and flavor, so eat it all up by then.  Don't worry, you won't have a problem doing it!

To reheat your leftover baked French toast, simply put the entire thing back in the oven and heat it up on low heat until heated through. You can also microwave it if you're in a hurry.

What other cheese I can use?

Cream cheese can be replaced with cottage cheese, ricotta cheese and yogurt. I did not try mascarpone cheese but I believe it might work too.

With what can I replace brioche?

Brioche is a rich dough. Alternatives can be challah or egg bread, sourdough, croissants and hot cross buns.

Can I make this ahead?

Yes, you can prepare it overnight and cover well with a foil. Store in the refrigerator until ready to bake.

What other flavor can I use instead of lemon?

I have tried this recipe with only vanilla flavor and/or shredded coconut mix in the cream cheese before. The combination of cream cheese and coconut may sound weird but I found it interesting and definitely worth a try.

Can I use lactose free milk?

If you are lactose intolerant, I suggest using lactose free milk or almond milk. Don’t use coconut milk or cream. Oats and rice milk are too light. Soy should be fine too.

Give This Blueberry Baked French Toast a Try

This blueberry French toast bake is so delicious, and it's so easy to make. It's one of those recipes that just begs to be made again and again. The family will be begging for it, too, and you'll be happy to oblige them.

After all, a recipe this good that's also this easy is one that shouldn't be passed up!

Other recipes to try 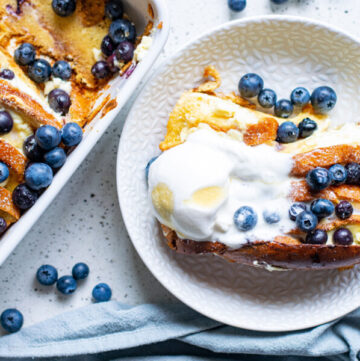