How to Cook Hamburgers in Air Fryer recipe shows how easy cooking hamburger patties in your air fryer is. Air Fryer Hamburgers are delicious! Just you wait and see.

This is one of the easiest air fryer hamburger recipes you'll ever make, and when we're all done, you'll know exactly how to cook hamburgers in the air fryer!

So let's get started talking about cooking hamburgers in the air fryer.

Did you know that cooking hamburgers in your air fryer are simple to do?! It's true—Air Fryer Hamburgers are one of the best ways to get a ton of flavor into your burgers, fast.

A lot of people actually air fryer burgers over grilling them! That's because air fryer hamburger patties have such a great texture and flavor. They come out juicy and tender on the inside with just a bit of crusty goodness on the outside.

When I tell people that I love to cook up my burgers in the air fryer, they're amazed that this is a "thing". It's so much a thing that it's actually quite a frequent occurrence in our house. I think everyone needs a great air fryer hamburger recipe!

And to be honest, there's really nothing quite like it. The burgers stay plump and juicy and the outer layer has a bit of a crisp that I really thoroughly love. When you bite into air fryer hamburger patties, you get an explosion of juicy flavor.

Sometimes, I'll even eat my hamburgers with a knife and fork just to keep the mess to a minimum. Then again, other times, I'll just wipe my chin with a napkin and keep going for it.

I'm also a big fan of cooking burgers in many ways so this air fryer hamburger recipe is a nice variance. Just grab your toppings and get ready to have one of the juiciest burger bites, ever.

Although we've been eating some version of modern-day hamburgers for well over a century, their true origin remains shrouded in mystery. Like a surprising number of foods, the official origin of the hamburger still remains unknown.

As far back as 1758, a recipe for Hamburger Sausage, which was suggested to be served roasted with toasted bread under it, can be found in The Art of Cookery Made Plain and Easy.

A similar bread and beef food was popular in Hamburg in or around 1869, which is said to have been eaten by immigrants on their way to America. There's a reference to a Hamburg steak as early as 1884 in the Boston Journal.

So the earliest iterations of burgers are not new, but the modern-day burger is relatively new. It's commonly thought to have been invented in the USA with heavy inspiration from the hamburg steak.

It's said that the origin of the hamburger actually comes from Hamburg, Germany by Otto Kause, but that it gained national recognition at the 1904 St. Louis World's Fair. At that time the New York Tribune referred to the hamburger as the innovation of a food vendor on the pike.

Claims to the Burger Throne

There are varying stories as to who invented the modern-day hamburger, but right now, there are five stories that claim the credit for the creation of what we now know as the hamburger.

One version claims that Louis Lassen, owner of Louis' Lunch in New Haven created the burger when he served up ground meat patties between two slices of bread. According to legend, he first made the sandwich after a customer ordered a steak. Louis was out of steaks, so he took the beef trimmings, formed them into a patty, and grilled them.

White Castle attributes the creation of the hamburger to Otto Kuase. According to them he created a beef patty cooked in butter and topped with a fried egg in 1891. After that German sailors are said to have omitted the egg.

The family of Oscar Weber Bilby - yes, the Weber grill family - claims that the first burger on a bun was actually served on Grandpa Oscar's farm on July 4th, 1891.

Still another account is that Frank and Charles Menches actually created the hamburger in 1885, where they served it at the Eire County Fair after running out of pork sausage.

The story goes that after running out of pork sausage, the brothers bought chopped beef from a butcher. They then cooked up the beef and served it on buns.

This version of the story is a bit more suspect than others, with many holes in it. For example, the brother claimed to have purchased the beef from Andrew Klein, however, a food historian found that the meat was from Stein's market.

In addition, the name hamburger purports to have come from Hamburg, New York not Hamburg, Germany, although a precursor to the hamburger does, in fact, come from the German city.

How to Cook Hamburgers in the Air Fryer

It's a fairly straightforward process, really, but for the uninitiated, it can seem quite daunting. That's why I'm doling out some knowledge on cooking hamburgers in the air fryer. We'll be talking about everything relating to air fryer hamburger recipes, so let's get to it.

Can You Cook Hamburger Meat in an Air Fryer

You bet. I can and I do. The air fryer is equipped to cook all types of meat like this Air Fryer Chicken Cordon Bleu or this recipe for Air Fried Nashville Hot Chicken Strips as well. It might seem odd to you at first, but trust me, cooking hamburgers in the air fryer is where it's at.

How Long do Air Fryer Hamburger Patties Take to Cook

It will vary each and every time that you cook up these hamburgers in the air fryer. The biggest thing to pay attention to is that you need to make certain that you're using a meat thermometer to know the doneness of the burgers. An internal temp of 160 degrees is an indicator that the beef is pulled and ready to eat.

Do You Need to Flip Burgers in an Air Fryer

You do. Halfway through the cooking time, you're going to want to flip the burgers.

This is actually a really big misconception about air fryers that people tend to struggle with. Most people think that the food that is added to the air fryer doesn't have to be flipped but it usually does.

While the air fryer does a great job of circulating the air, it still needs to be flipped to get an even cooking time on all sides. Most times you'll just have to flip once though, halfway through to get the job done.

Ingredients for Cooking Hamburgers in the Air Fryer

You don't need much to make air fryer hamburger patties. In fact, if you want to know how to cook hamburgers in the air fryer, it all begins in the same way that any other burger does—with the ingredients.

You must first make the decision to use teriyaki sauce or your favorite barbecue sauce to make your hamburger patties. You won't need much but a little goes a long way.

In my opinion, both are absolutely perfect inside the burger and taste delicious.

Here's what you'll need to create your patties.

As you can see, four main ingredients are what you need for this hamburger patty recipe and the rest all comes down to your choice of toppings! The fun part about toppings is that you can literally change up the flavor and taste of every single burger you make.

You never have to have a burger taste the same, if you don't want to.

Tips for Cooking Hamburgers in the Air Fryer

Even though air fryer hamburger recipes are crazy easy, there are a few tips that I thought I'd pass along. That way, you don't have to do them like I "might" have the first time!

Yes, it's a thing. You can mix your hamburger meat too much. What this does is basically break down the meat and fat content in a way that will make them tougher and potentially even dry out.

Just a few simple stirs are all you need to do. Basically, this is the meat version of folding rather than stirring.

I'm tempted by this every single time. I like a fat juicy burger! But I also like a burger that is cooked all the way through so it's important to not make the burger too thick for this recipe. The perfect size is going to be about ½ inch thick.

Even though the burger patties have fat in them, you still need to grease the air fryer as well. Just spray it with some non-stick spray before you add in your meat.

This is one of those "tricks" that more and more people are starting to do. The reason that you make a divot in the middle of the meat is that it stops the burgers from shrinking while you're cooking them.

Have you ever cooked a hamburger patty and once it's done cooking, it's literally ⅓ of the size that it was before? This is because it shrunk up quickly based on the amount of fat content in the meat.

Putting a small divot in the middle of the burger is a simple way to take care of that issue. Just press lightly in the middle and don't make an actual hole - just a small little dent.

Don't Forget to Flip the Burgers

Remember to flip your burger patties halfway through. This will be at about the 3-5 mark depending on the thickness of the burgers.

The Best Toppings for Hamburgers in the Air Fryer

I truly feel that the hamburger topping options are endless. Some of my favorite toppings for hamburgers include:

And those are just a few! Don't forget about condiments like ketchup, mustard, and mayo as well. The list could literally go on forever!

If you have hamburgers leftover to enjoy again, yay! Just be certain to reheat them low and slow so that you don't zap them and overcook them. You can use your air fryer to reheat but pay close attention to the temp. It should only take a couple of minutes, tops.

Love this simple burger recipe? Check out this easy recipe for more air fryer recipes, too!

Now You Know How to Cook Hamburgers in the Air Fryer

How to Cook Hamburgers in Air Fryer Video 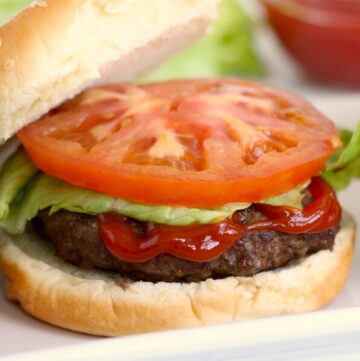 How to Cook Hamburgers in Air Fryer