This air fryer pizza is a delicious, modern take on the classic pizza we all know and love. This semi-homemade air fried pizza features delicious toppings you'll love like cheese, pepperoni, bell pepper, and mushrooms. It all comes together quickly and cooks up like a dream in your air fryer! 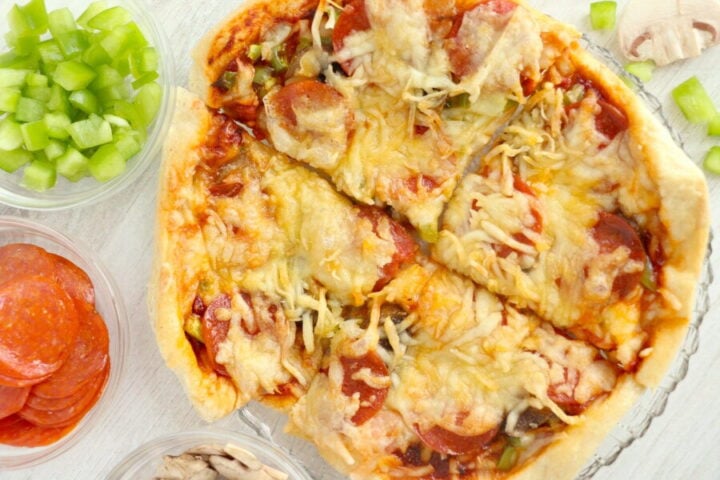 Is there anyone who doesn't love pizza? I mean, I'm sure there are folks out there who don't love this classic Italian treat, but I don't know any. Pizza is a classic meal among so many of us across North America and the world. We enjoy it for weeknight meals, special occasions, sporting events - really, any time we can get it.

I've been eating pizza since I was a girl. We used to make homemade pizza about once a month, and when I knew it was coming, I got so excited. Of course, I ate store-bought pizza, but nothing compared to the homemade version that I loved so much.

As I got older and started cooking for myself, I continued the tradition of homemade pizza in my home. I regularly make it for my husband and son, and even after all these years, it's continued to be one of our favorite meals to have together.

That's why I want to share this delicious recipe with all of you. It's a new take on one of my favorite family meals, and it is so good! 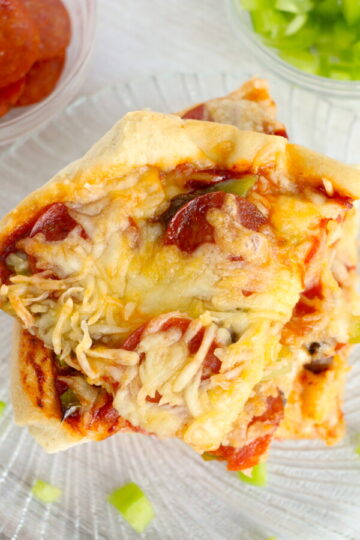 What Paved the Way to Air Fryer Pizza

This air fried pizza takes the flavors of classic pizza and cooks them up in a new way - the air fryer. As an avid air fryer cook, I'm in love with the idea of air frying everything I possibly can, which is why I created this recipe.

Pizza has been around for hundreds of years, but its predecessors were around long before that! Between pizza itself and the ideas that led to pizza, the road to this classic Italian dish stretches back thousands of years.

Ancient Egyptians, Romans, and Greeks all ate flatbreads with toppings, which is really all pizza is. Although pizza’s origins began long, long ago, the equivalent to what we know as pizza today was born around the 1700s in Naples.

Naples was known as a city of the working poor. These people were packed into the city and lived in homes that were sometimes nothing more than a room. With such a meager existence, Neapolitans had to find ways of making inexpensive food.

That’s where pizza came in. Flatbreads with various toppings were the answer to the Neapolitans’ need for inexpensive food. These flatbreads were very similar to our modern-day pizzas, topped with classics like tomatoes, cheese, oil, anchovies, and garlic.

After Italy unified in 1861, the story goes that King Umberto I and Queen Margherita visited Naples and, while there, asked for an assortment of pizzas. The pizza that the queen enjoyed the most was topped with mozzarella cheese, red tomatoes, and green basil.

As the legend goes, this is where the Margherita pizza, the most classic of all pizzas, was born.

Fast forward over 150 years later, and we put almost anything on a pizza, from classic ingredients to pineapple and ham. They also come in all sorts of varieties from thin and crispy to soft and foldable, deep dish, and of course, air fried.

However you make it or top it, there's one thing that remains the same. Pizza is delicious!

History of the Air Fryer

Despite their name, air fryers don’t actually fry food. In reality, these appliances are more like small convection ovens than frying appliances.

They use hot, circulating air to cook evenly and create a crispy outer later on battered foods and a nice texture on baked goods.

Even simple vegetable dishes that involve nothing more than a little seasoning come out amazingly well in the air fryer thanks to its impressive uniformity of heat which leads to fast, uniform cooking.

Convection ovens have been around since 1945, but it wasn't until 2010 when the first air fryer was introduced to the market.

In that year, Philips a small convection oven named, you guessed it, the Airfryer at a consumer electronics fair in Berlin.

The appliance became so popular that its use has spread all across the globe and the term Airfryer, which was once simply a name for Philips' particular invention has now become a generic term for any air frying appliance.

We know where and when pizza was invented, and we know where the delightful gadget that we use to cook it originated. Now it's time to talk about the air fryer pizza itself. This air fried pizza is so delicious, you guys.

It's a super easy, semi-homemade recipe that uses refrigerated pizza dough and store-bought sauce to help things come together quickly, and it's packed with cheese, pepperoni, bell peppers, and mushrooms.

Thanks to the air frying process, this pizza has a crust that's crispy on the outside and soft on the inside and a top that is perfectly cooked to golden, melty perfection. It also cooks up fast!

There are really no tradeoffs at all when it comes to this recipe. It's all pros all the time! Woo hoo!

It only takes a handful of ingredients to make this air fried pizza, and if you regularly make pizzas, you might have all the ingredients in your kitchen already. If not, you can find all of them readily available at your local grocery store.

They're all quite common ingredients. There's nothing fancy here. What's even better is that you can make two pizzas with the ingredients.

See? That's a pretty simple list, isn't it? Just six ingredients get pizza in you and your family in no time.

Making this air fryer pizza is as simple as the ingredient list we just saw. The only preparation you need to do is dicing the vegetables and layering the pizza. The air fryer does the rest of the work for you.

It doesn't get much simpler than that. You'll find the recipe card complete with amounts and cooking times at the end of this post, but I wanted you to have a nice overview of the recipe so you can see just how easy it is to make. Take a look.

See? It's so easy to make this pizza. Just dice, layer, and air fry, and you're all done. Easy peasy, err, pizza.

The great thing about any pizza recipe is that it's only the beginning, and the same holds true for this recipe. Pizza is just so versatile. You can put almost anything you want on it. It's all about personal taste, so feel free to get as creative as you want. The sky is really the limit.

You can find all kinds of pizza crusts out there from gluten-free to whole wheat and more. I love classic pizza crust, but there's no reason you can't experiment to find one that's perfect for you. Each crust has benefits. Gluten-free crust makes pizza a possibility for those with Celiac disease and whole wheat crust adds a bit of chewiness to the bite of the pizza.

Even among classic red pizza sauce, there's a variety of flavors to be found out there, but you can get so much more creative than that.

All Kinds of Toppings

Pizza, bell peppers, and mushrooms are the classic three for me and my family, but pizza just begs to be topped with almost anything you love.

With the huge variety of meats and veggies out there, the combinations are almost endless. Some of my favorite toppings for pizza include: 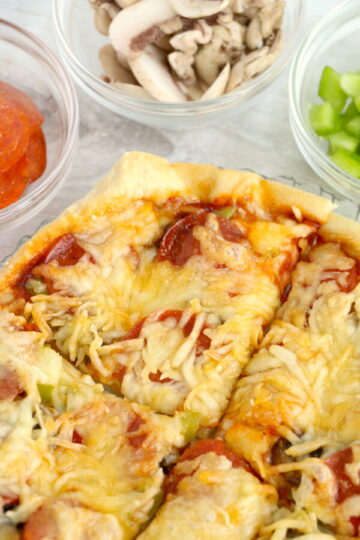 This semi-homemade air fried pizza is a dream because it's so delicious and so easy. However, even with a recipe as easy as this one, there are some things to remember to ensure that your air fryer pizza is the best one that you can possibly make.

You might remember that in my air fryer tips and tricks post, I mentioned that most recipes don't require preheating. This pizza isn't one of them. Pizza is best when it begins its cooking at the temperature called for. This is what gives it that crispy crust. You don't want it to start off cooking slowly. You'll end up with a soggy, limp crust.

This recipe calls for pepperoni which is already cured, so there's no issue there, but if you're using toppings like ground beef, sausage, or some other raw meat, you should cook the meat before adding it to your pizza.

I recommend this for any pizza made in any oven because it cuts down on grease and excess moisture, but it's absolutely imperative that you precook your meat when making air fried pizza.

Air fryer pizza cooks up fast so if you top it with raw meat, you'll end up with meat that might be undercooked and you'll absolutely end up with excess moisture that makes your sauce runny, your cheese less melty, and your crust soggy.

You might be tempted to simply spray down your air fryer basket with non-stick spray so that more air and heat can circulate around the bottom of your pizza crust. It's an idea similar to placing a pizza directly on the oven rack. Don't do it!

Even with a thoroughly coated basket, your pizza will stick. That's because the weight of the pizza will press the raw dough into the spaces of the basket before it's cooked up enough to retain its shape.

Even if your pizza only sinks into the basket spaces a little bit, it's going to be a nightmare to get out. Trust me. I know... 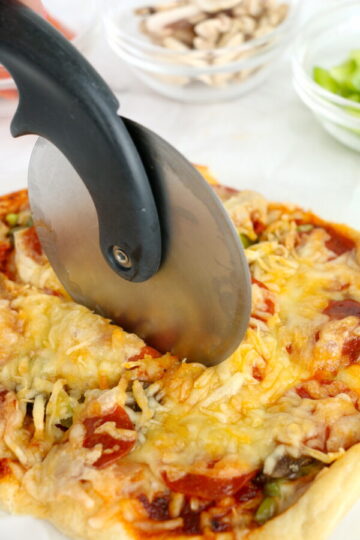 You might have noticed that I skipped the commonly found "serving" section in this post. That's because this is pizza. We all know how that's served. It goes into your mouth as quickly as possible! I'm kidding, but only a little bit.

You can store this pizza in the refrigerator in an air-tight container for up to three days, although it will most likely be gone before then. For longer storage, you can freeze your leftovers for up to two months.

Simply cut the pizza up and wrap each slice tightly in cling wrap and then again in foil.

To reheat, let the pizza defrost in the refrigerator and then place it in the oven or the air fryer for a minute or two. You can also microwave it, but it won't be as crisp.

You Need Air Fryer Pizza in Your Life

You just didn't know it. But now you do. This air fried pizza is super delicious and super easy. It's packed with classic pizza flavor, comes together in a flash, and can be tweaked and changed to make it whatever you want it to be.

With a recipe this easy and delicious, you just have to try it. 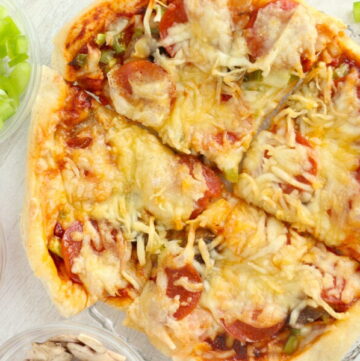